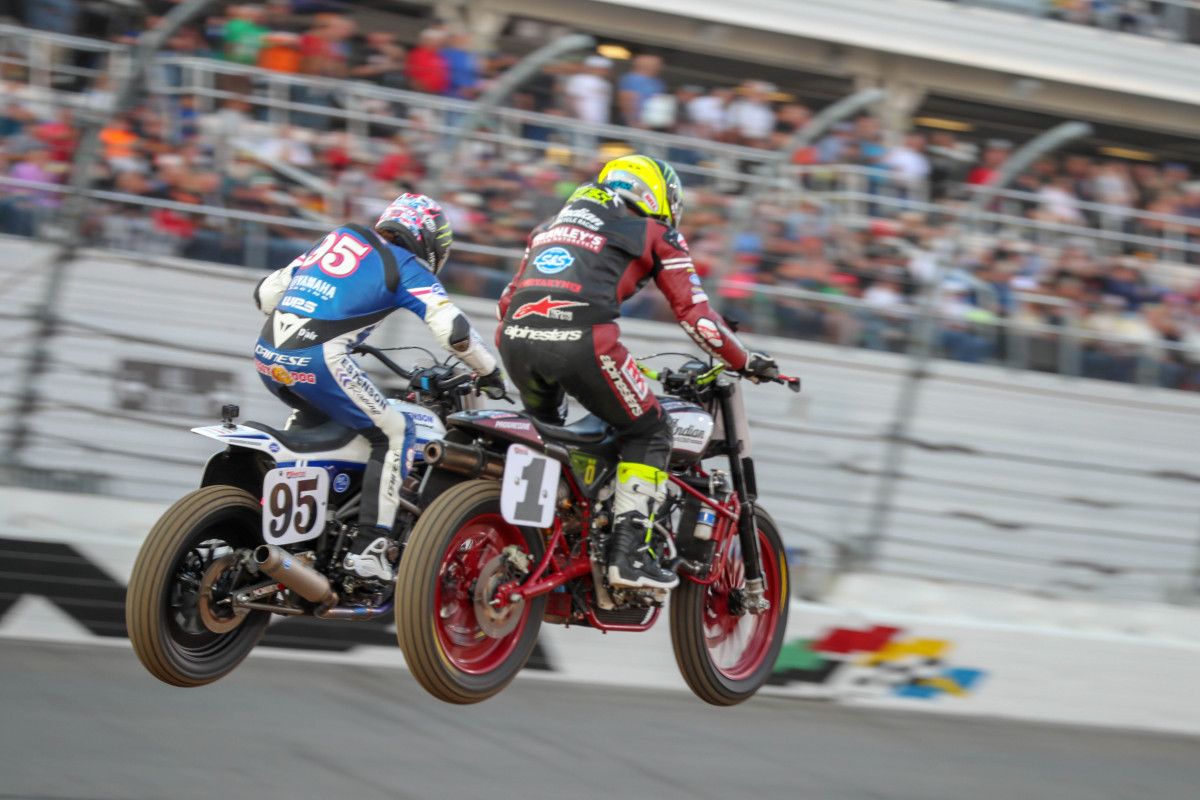 DAYTONA BEACH, Fla. (March 10, 2020) – Following months of high-profile announcements and anticipation, the 2020 American Flat Track season has finally arrived. The dawn of the AFT SuperTwins era will begin in just about the most epic fashion imaginable, as the season-opening DAYTONA TT will round out an historic doubleheader at Daytona International Speedway following 79th running of the DAYTONA 200 presented by Comoto on Saturday, March 14, in Daytona Beach, Florida.

Round 1 of the revamped AFT SuperTwins presented by Vance & Hines class will see three manufacturers set to do battle, each one with a legitimate shot at claiming the first checkered flag of the new campaign.

On each occasion, that season-opening triumph set the stage for a Grand National Championship run with Bauman successfully building upon his ‘19 victory the same way Mees had in ‘17 and ‘18.

The Harley-Davidson / Vance & Hines Factory Flat Track Team expects to step its game up another notch in 2020 following an offseason reshuffle. The talent-laden three-rider team is headlined by former Grand National Champion Bryan Smith (No. 4 Harley-Davidson/Vance & Hines XG750R Rev X). While Smith is best known for his mastery of the Miles, it’s worth recalling that he did finish as the race runner-up in the 2017 DAYTONA TT and has been actively testing the TT-spec XG750R in preparation of the opener.

Yamaha has a TT heavyweight of its own in its corner. The hugely talented JD Beach (No. 95 Estenson Racing Yamaha MT-07 DT) was victorious in two of the four TTs last year and came within a half-second of victory at the 2018 DAYTONA TT. He looked to be among the fastest riders on track again a year ago, but he failed to make the Main after crashing in the Semi -- a fate he will no longer need to concern himself with as a result of the revised AFT SuperTwins rules.

The 2020 AFT Singles presented by Russ Brown Motorcycle Attorneys title fight looks to be a wide-open affair with the class’ three most recent champions having all graduated to AFT SuperTwins duty.

Even in their absence, the buzz surrounding the class is arguably greater than ever, amped up in large part due to the addition of Henry Wiles (No. 17 RMR Honda/Honda Talon CRF450R). Wiles expects to make his presence felt right from the start: he’s arguably the most accomplished Singles riders in the history of the sport, the winningest TT rider in AFT history, and a premier-class podium finisher in all three prior runnings of the DAYTONA TT.

Last year’s AFT Singles championship runner-up, Mikey Rush (No. 14 Estenson Racing Yamaha YZ450F), will have his say as well. Rush was strong virtually everywhere in 2019 -- including the TTs -- and he should only increase in strength with a full season of AFT Singles experience under his belt.

16-year-old wunderkind Dallas Daniels (No. 32 Estenson Racing Yamaha YZ450F) should not be overlooked either. Daniels went on a tear to conclude his rookie season in ‘19, ripping off five top-fives in the season’s final seven races, including a dominant win and three podiums. Perhaps even more alarming for the competition is the fact that the DAYTONA TT track configuration should play to the strengths of the ascending joint flat track/roadracing ace.

The DAYTONA TT is destined to extend the glitz and glamour of the highly anticipated season opener far beyond the confines of the High Banks. A free “Bike Night with American Flat Track” will take place two days prior to the doubleheader at ONE DAYTONA on Thursday, March 12, from 6:00 p.m. ET until 8:00 p.m. ET. The celebration will feature race bikes on display, photo ops with the racers, and Q&As with riders representing both the DAYTONA TT and DAYTONA 200.

On race day, “Mr. Daytona” Scott Russell will serve as the DAYTONA TT Grand Marshal to highlight Opening Ceremonies that will include a jump and presentation of the red, white, and blue by the US Army Black Daggers Jump Team. Live music and vendors will feature in the UNOH FanZone, along with numerous other family-friendly Bike Week activities. For children there will be STACYC electric balance bike demos and Strider balance bike races courtesy of Mimi & Moto. Infield parking will be free for motorcycles and, for the first time, other vehicles will be welcomed to park in the infield as well for just $20.

Tickets for the first-ever DAYTONA 200 and DAYTONA TT doubleheader are on sale now. Watch both historic motorcycle racing events during Bike Week at DAYTONA for just $35 when you purchase an advance General Admission ticket online at tickets.americanflattrack.com. Multiple upgraded ticket options are available, including trackside seating (which has the potential to sell out), the premium Presidents Row ticket, and the $40 Paddock Admission Upgrade, which offers access to the paddock until the start of the Main Events.

Live coverage of the entire day’s racing activities will be available via TrackPass on NBC Sports Gold. Coverage will begin shortly after the gates open at 8:00 a.m. ET/5:00 a.m PT. The DAYTONA 200 festivities kick off with a Fan Walk, Autograph Session, and Opening Ceremonies at 9:30 a.m. ET/6:30 a.m. PT, while the legendary race is scheduled to begin at 11:00 a.m. ET/8:00 a.m. ET.

The DAYTONA TT is the first of two American Flat Track events this season to enjoy same-day coverage on NBCSN. The feature broadcast -- enhanced by exclusive features and cutting-edge aerial drone and onboard footage -- will air that same evening, Saturday, March 14, at 11:30 p.m. ET/8:30 p.m. PT.