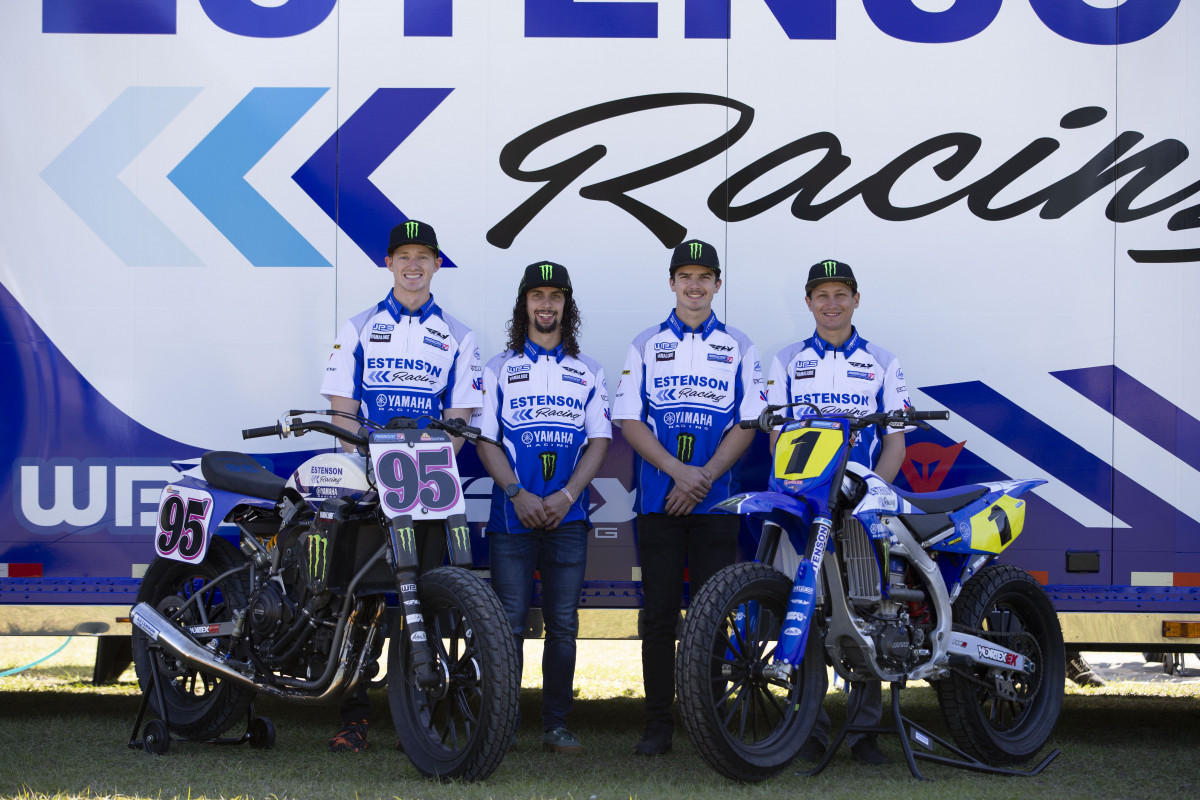 Posted on behalf of Estenson Racing

Beach enters his second full season in American Flat Track looking to return to the top step of the podium in the premier class. The multi-time road race champion scored a pair of wins on a TT track during his debut season with the team in 2019. He and the team have been putting in a lot of hours this winter working on the development of the Estenson Racing prepped Yamaha MT-07 dirt track racer and they are eager to line-up in competition.

His young AFT SuperTwins teammate Carlile returns with the team for his sixth season. The 2017 AFT Singles Champion had a solid debut season on the Twin in 2019, overcoming an early-season injury and scoring a pair of wins in the AFT Production Twins class to end the year third in the standings. Unfortunately, the New Yorker re-injured his knee last year during testing and missed the final two rounds of the season to undergo surgery. Now that he’s back to full fitness, Carlile is ready for battle in the premier class.

Daniels heads into 2021 sporting the number-one plate on his Estenson Racing prepped Yamaha YZ450F. Although he didn’t qualify for the Main Event at last year’s season opener at Volusia Speedway, he came back swinging with a thrilling victory at the Volusia Half-Mile II. As the season progressed, the young phenom dominated the stacked AFT Singles class, launching a six-race win streak and a total to secure the crown a weekend early at the Charlotte Half-Mile. Daniels is eager to defend his title in what is only the 17-year-old’s second full season in the pro ranks.

Rush looks to build on last year’s debut season with the team. He scored three podiums and took the win at the Williams Grove Half-Mile I to end the year fourth in the standings. A proven title contender in the AFT Singles class, the Californian is eager to get back to racing and begin his title campaign.

“We’re definitely excited to get started again. It feels like a short winter. It’s definitely gone by fast. The entire team has worked really hard and our time testing has been promising. We’re looking forward to seeing how some of the new stuff that we’ve come up with works in the race environment and hope that our track performance improves like we think it will.”

“I think going into the new year it’s going to be exciting. The team has done a lot of work this winter. I think we have a lot that we can work off of. The little bit of time that we’ve been on the bike, it’s better than it was last season. We still have some work to do, but I think we’ve got a great bike to work with. I know the team is really motivated and so am I. I’m looking forward to the new season and getting it started at Volusia.”

“I’m really excited. I left last season a few races early so I could get my knee repaired properly. I spent a lot of time recovering on that and did it perfectly this time, I’m really happy with how it came out. The team worked super hard all winter so far and I spent a lot of time training down here in Florida getting prepped as soon as I could after my knee surgery. I had a really good off-season, I’m really happy with how I’ve progressed and I got to do a few races down here in Florida. I’m really enjoying the new bike, it’s super comfortable underneath me. I’m already seeing big improvements over last year so it’s all up from here.”

“It’s really exciting running the number-one plate this season. Even though I’m the defending champion, I still feel like I have a lot to learn in this class, I’m still really young and this is only my second full season. I’m looking forward to continuing to learn and improving the bike. Last year was really good, and I’m hoping it can be even better.

“Volusia is a really fast car track. To me, everybody is so close there in times so it’s really hard to win there. Obviously, I’m looking to do what we did last year, except to qualify for the first Main Event. With everybody being so close, I’m just looking to come out of there with some good finishes.”

“I’m super excited to get the 2021 season started this weekend at Volusia. To be with the same team, the same guys, for two years in a row, is awesome and a blessing for me, for sure. I put in a lot of work this off-season and I know the team did also. So fitness-wise and riding-wise, I think I’m more prepared than ever.”

The Volusia Half-Mile I & II presented by Daytona Dodge will air back-to-back on NBCSN on Saturday, March 20, starting at 12:00 p.m. ET/9:00 a.m. PT. The broadcasts will include exclusive features, cutting-edge aerial drone and onboard footage, and expert commentary.