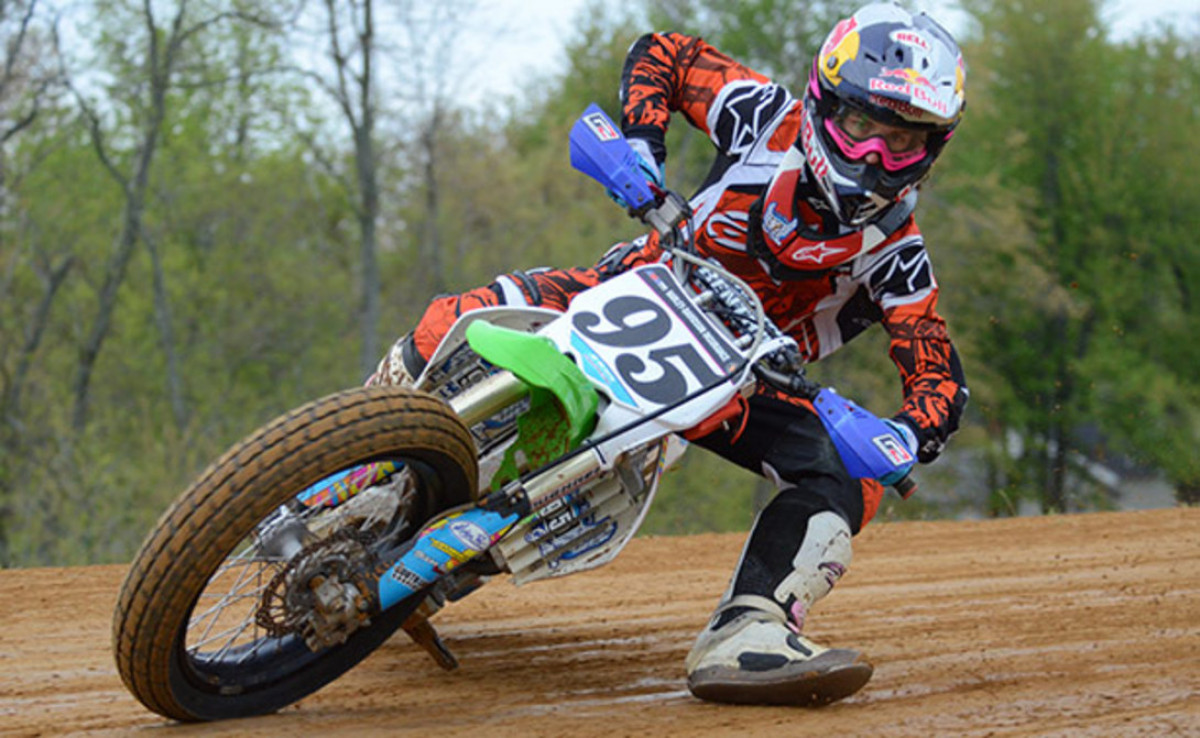 So it’s been awhile since our last race and my last race report. I hope I’m not too rusty at it. We didn’t quite do any racing but I have some good stuff to write about. I’m a week late with it but it’s still some good stuff. It really all started a few days after we got home from Daytona in March. I was up eating breakfast one morning and on twitter I saw Troy Bayliss had tweeted to me about the race. It was pretty awesome to have a childhood hero tweet to me. I knew he had been doing some dirt track and doing his own races in Australia, so I decided to tweet him back and tell him to come over to the USA and ride some proper dirt track bikes.

After tweeting back and forth a few times I got his email address and really got the ball rolling. There is only so much you can say in a 140 character tweet. Everything seemed like it was falling in place, he was planning on being over here for a Bell Media Day we both were going to be at. We had a big break after Daytona so the weekend was open with no races, my dirt track team had all the bikes ready (the 450s and 650s), Troy wanted to come, and we had tracks, what could go wrong. Then the week of the whole deal it seemed like everything was falling apart, the weather looked horrible for the weekend, tracks started calling back with hidden fees they didn’t tell us about before. I was getting very nervous, Troy is one of my hero’s and I had never met him before. He was coming so far to ride some dirt track and it was looking like rain and no tracks. I was feeling sick over it but I never gave up and kept trying to find different options. Frankie had the track at the house ready to go, packed tight to shield it from the rain so I was praying it would work.

Friday at 2 I left the house in my van to go pick up Troy from the Nashville airport. I was so nervous, it was weird, I have met many racers and they are just all normal people but I guess since I was picking him up, driving him 2 hours to our house and putting a weekend of riding together for him it was different. Once I had him picked up we drove back to the house, talking about racing and everything, and his son was having his first dirt track race at home. He was missing it but It was cool to hear and see how excited he was about it. Once we got to the house it was about 9 or so and we were up until 11 talking to Kerri and Frankie. The next day it was supposed to rain and we got up at 6 and it was dry, we had our breakfast and got the bikes ready and as soon as the clock turned 8 the bikes started up, and when I say bikes I mean my 450 race bikes that are LOUD. We started spinning laps as people started showing up. FLG, Hayden, Luke, Pat (Bell guy), John (film guy), TJ, and Brandon. They all started getting there one by one.

It was cool watching Troy ride and transform from an Australian dirt track to an American dirt track. He started with leathers and road race boots. Then I got him into a hot shoe, and then later got him to get out of his leather and in a set of my moto gear. Changed his riding style some, then it started raining. By that time it was only 11 and we had a ton of laps in. We took a break and went and got lunch, finding out Troy loves Mexican food, which is awesome because I could eat it every meal. After we got back it was still raining just a bit so we just sat and waited. TJ, Brandon, Luke, and I did a Nascar pit stop on my 450 and transformed a motocross bike into a dirt track bike since more people were showing up so we had more bikes. Frankie got on the tractor and got the track dialed in yet again and within a few hours of lunch there was about 8 of us spinning laps. Everyone laughing and having fun, it was an amazing time.

After a long day of riding we all went and had a great dinner and had a blast, telling and hearing all kinds of stories. It was just one of those weekends that you’ll never forget. Sunday morning Kerri and I got up and made a big breakfast for everyone and we watched the World SuperBike races live on TV. There was a crappy wet cloud cover all day so the track never dried out. I think it was ok though because he got a lot of laps in Saturday, so we decided to go on a nice long pedal. It was Brandon’s first time riding so we took him on a 40mile ride. He rode like a champ and finished strong.

The next day it was an early start (3am) for Troy, Hayden and I because we were heading West to Chuckwalla for the Bell Media Day put on by Cycle World. It was so cool traveling with Troy, we had some long flights and he was sitting in a middle seat, he’s a 3x WSBK champ and a MotoGP winner and it was no big deal to him. Once in California we went to KTM, which was really interesting and getting to catch up with some people I hadn’t seen in awhile. We went and ate and saw Nico Izzi and Josh Hansen then headed to Chuckwalla.

We had a full day riding bone stock street bikes. Just riding them as hard as possible. It was a ton of fun, no lap times, nothing new to test, just seeing who could wheelie and slide longer basically. Along with Hayden, Troy and I, Josh Herrin and Jake Gagne were there. It’s amazing how different it is hanging with everyone away from a race weekend.

The entire Bell people where there, along with the Cycle World group. It was just a great time. After the day we headed back to Orange County to fly home Wednesday morning. It was such a fun few days. I can’t thank Bell and Troy enough; Bell really had a big part of putting this all together. There are so many stories there’s no way I could fit it all in one report. I won’t forget this weekend. This past weekend was May 5th, that’s Ethan’s day being 6 years since he passed.

We all stayed home and had a great group of people over all weekend and had a lot of fun. We all really miss him still but it’s so nice to see so many people remembering him and celebrating the time we had with him.

Now the race season is starting finally. We are going to be racing every weekend almost until the end of October. Be ready for a lot of race reports, they will be shorter because I won’t have to cover two months. Thanks for reading and supporting my racing, hope to see you all at the track.