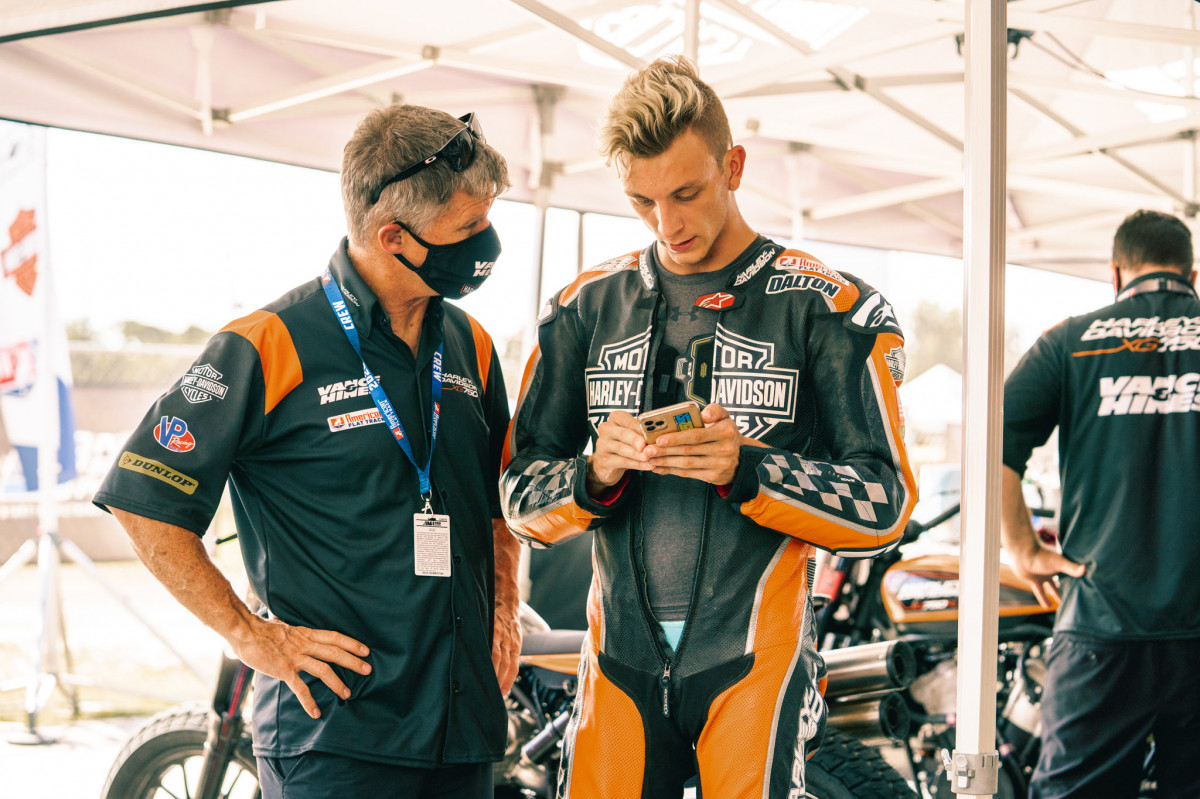 Fueled for a Win: Ricky Howerton and Harley-Davidson

Briar Bauman owned the spotlight at this year’s Indy Mile, capping off his career Grand Slam on Friday and then doubling up on Saturday. However, one ray of light did manage to escape the large shadow cast by the reigning Grand National Champion, and it was of a familiar orange hue that previously lit up the American Flat Track scene for decades.

Rather than shine a light on a glittering past, however, it instead pointed to a bright future. 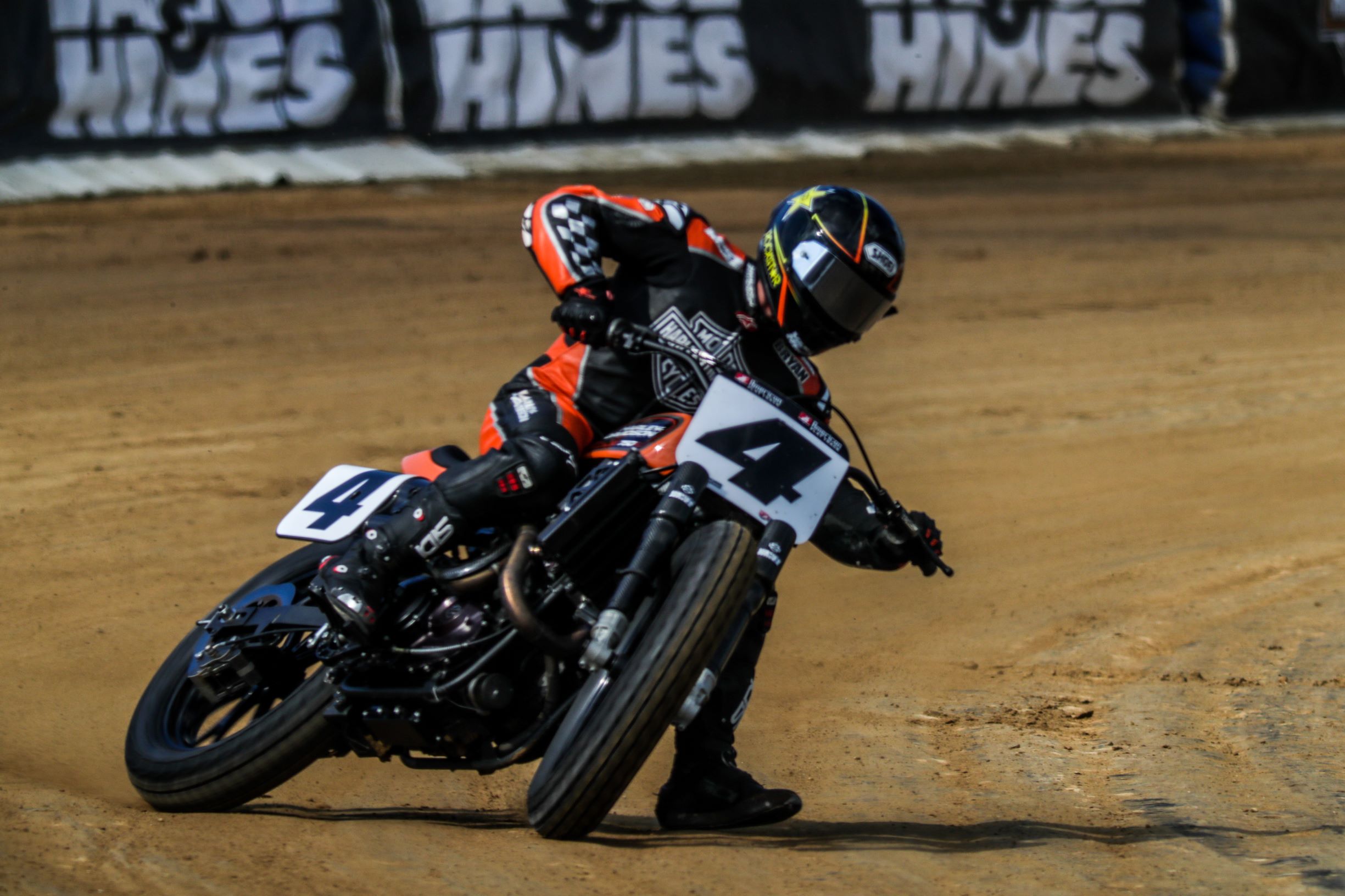 In just his fourth race aboard the works Harley-Davidson XG750R, Bryan Smith battled it out up front with Bauman and Jared Mees before ultimately finishing on the podium in third. Smith was in contention for the victory until late -- even leading for a spell -- before finishing well ahead of a field stacked with talented riders on fleet Indians save just the two factory FTR750s that happened to carry the odds-on title favorites. 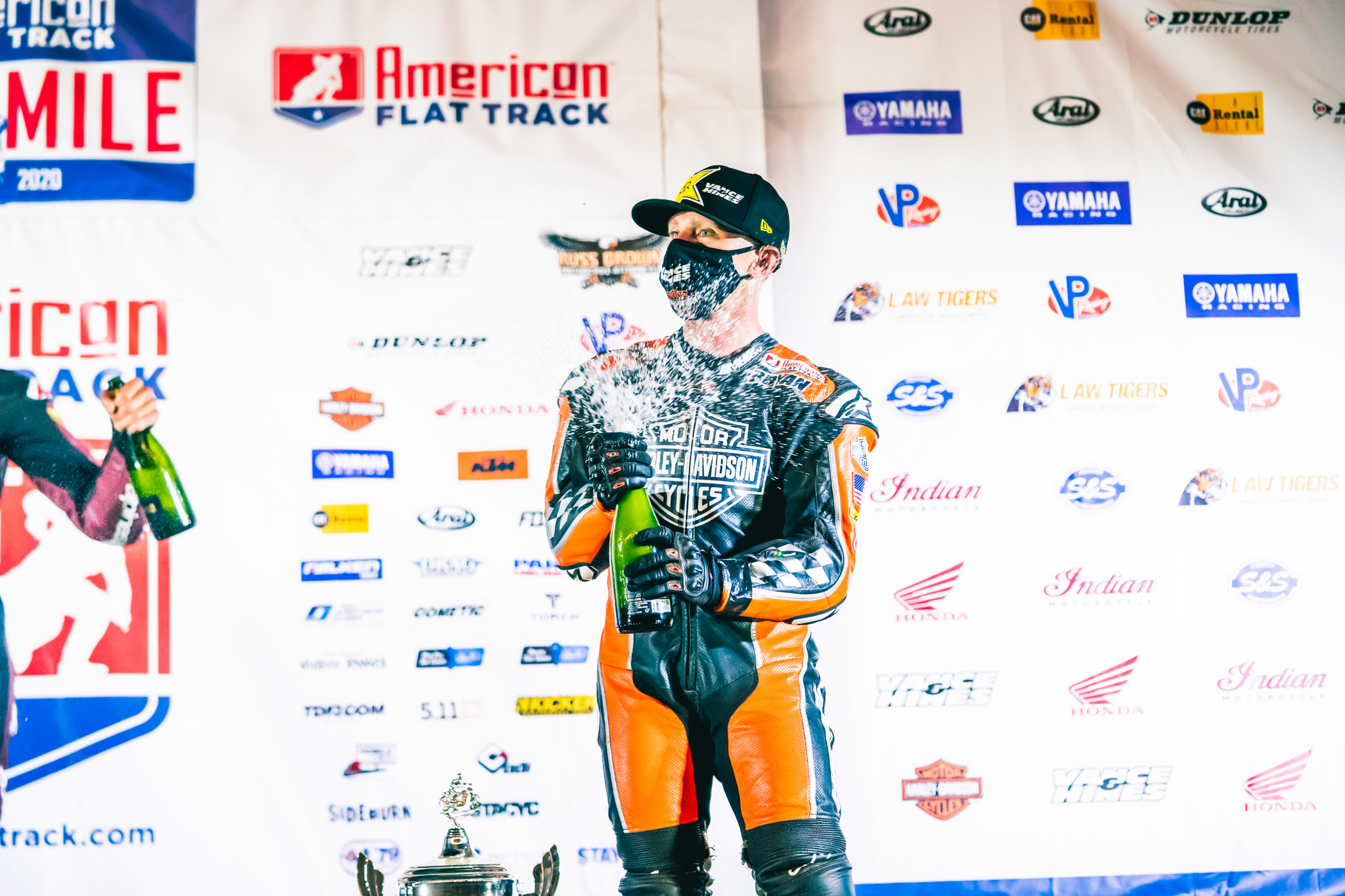 If anything, Smith and co. could prove even more competitive when the series arrives this Labor Day weekend for the Springfield Mile I & II presented by Memphis Shades.

Smith is a veritable Springfield master; his next win in the iconic race will be his tenth. He’s not alone in his high hopes. Like Smith, his young teammates, Jarod Vanderkooi and Dalton Gauthier, have each earned a pair of top-tens this season and hold memories of past Springfield success. It’s where Vanderkooi first burst on to the national scene in dominant fashion with a pair of undercard wins back in 2014, and where Gauthier proved himself the class of the AFT Production Twins field aboard a Black Hills Harley-Davidson XG750R one year ago.

As promising as Springfield appears to be on paper for the squad, the man looking over the factory Harley program these days was happy to savor the team’s Indy Mile podium a bit longer before turning the page.

Crew Chief Ricky Howerton has a long history with Indianapolis. His dad, Jackie Howerton, defeated the likes of Mario Andretti and Al Unser while still just a rookie to win the legendary 1974 Hoosier 100 USAC Silver Crown race at the Indianapolis State Fairgrounds (setting the bar mighty high for eventual 1990 USAC Rookie of the Year Ricky in the process).

Howerton Motorsports set up shop on Gasoline Alley in Indianapolis and was fabricating exhaust systems for leading race teams ranging from IndyCar to NASCAR to NHRA to Formula 1 long before Ricky expanded his expertise to two wheels and kicked off a title-winning relationship with Smith.

He said, “There are a couple crown jewels for the series. Historically speaking, Springfield is probably the biggest race, but for me personally, Indy is pretty special. Our first time at Indy in '12, Bryan was leading before he broke, and that was so hugely disappointing. To go back in '13 and win it -- and have my son play the national anthem there -- that was one of those nights that I’ll never, ever forget.” 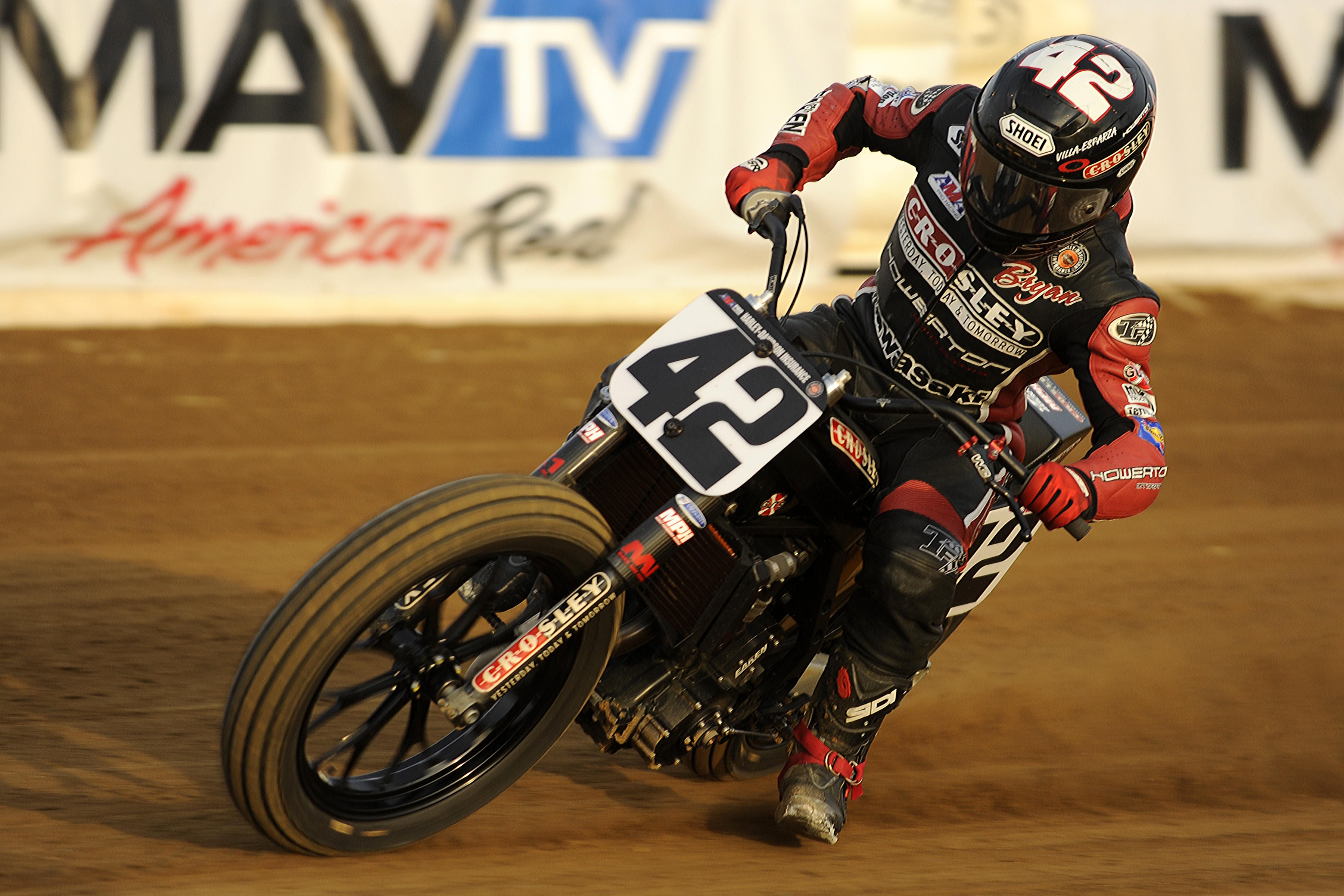 Smith prior to losing the lead after a mechanical failure at 2012's Indy Mile.
Photo: American Flat Track 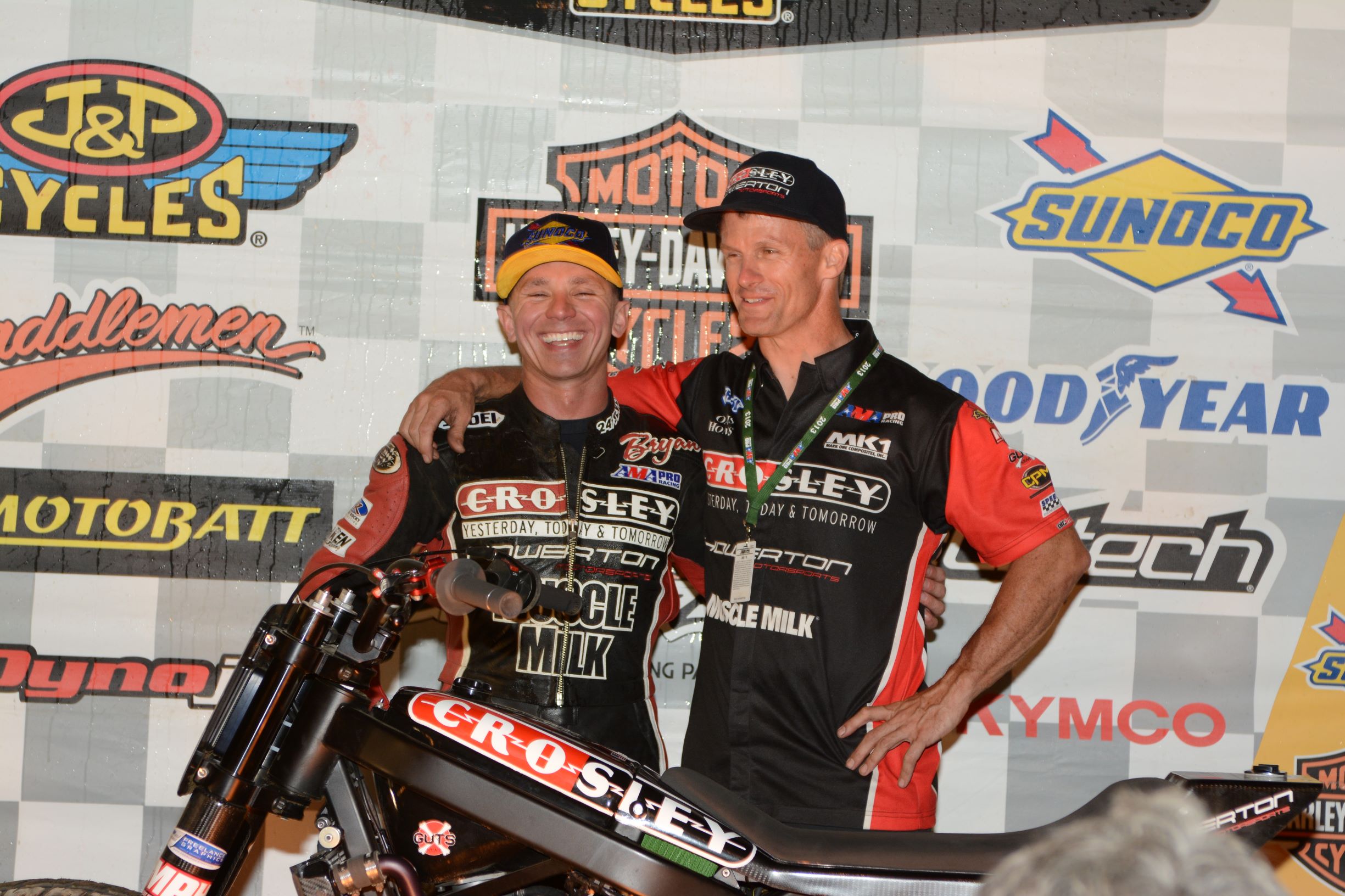 While Smith’s third-place run this season isn’t in the running for the most memorable night at the Indy Mile in Howerton’s life, it was rewarding all the same.

“Oh, absolutely. I think even more importantly for the guys at Harley and Vance & Hines, it showed them that their bike is capable of running up front. Bryan and I have been lucky enough to lead and win a lot of races, but Vance & Hines is still looking to grab their first one. They've made all the right steps; we've just got to keep focused and those guys are working hard.”

Howerton and Vance & Hines took full advantage of the offseason to maximize whatever gains they could find in their quest to track down and, ideally, overhaul the all-conquering and omnipresent Indian FTRs. They then took full advantage when essentially handed a second offseason due to the global pandemic that turned the world upside down and pushed sporting calendars backwards.

“Looking back at it now, (the additional time) was probably a blessing in disguise,” Howerton admitted. “Where we are now compared to where we were when we went to Daytona is leaps and bounds better. And that wasn't due to lack of working hard before.

“I think direction-wise we've made some huge, huge gains from the beginning of the season. Even since Volusia we've changed quite a bit of stuff.

“We've had to use some of these races as tests. It's hard to get any really good track time testing. At the end of the day, unless you have a track with a national prep job and a dozen guys on Indians running around there, it's really hard to see where you're at when it comes down to the last couple of tenths of a second.”

While Howerton is known for his chassis wizardry, the bulk of the focus -- at least initially -- was spent in the attempt to get the XG750R to do what its iconic predecessor, the XR750, was so renowned for -- deliver its power to the dirt in a rider-friendly, usable fashion.

“The majority of it was on the engine-side,” However said. “And I think that's where they needed to get substantially better. Bryon (Hines) and the guys out there have definitely gotten it a lot better.

“I think now that we're down to the nitty gritty, we’ve just got to look under every stone. Because if there's speed anywhere, no matter where it is, you've got to find it.

“There are a couple big things that we're looking at implementing for Springfield that we're going to try. We'll see how that goes. But even if we go with the bike we left the Indy Mile with, that's still plenty capable of winning. So yeah, we're super pumped to go over there.”

Along with the individual Springfield histories of Smith, Vanderkooi and Gauthier, the XG750R also enjoyed among its finest hours the last time it lined up at the “World’s Fastest Mile.”

Beyond Gauthier’s performance in the AFT Production Twins action, Vanderkooi won his heat in last year’s Springfield Mile II, and then-teammate Sammy Halbert reigned supreme in his Semi (with Vanderkooi third) to earn pole for the Main Event. There Halbert led late in the contest before he and Vanderkooi were shuffled back to sixth and eighth at the checkered flag.

Still, there’s no room for overconfidence for an underdog. As Howerton explained, “Last year, it was kind of a strange track if you look at it. The groove was sort of multiple lines -- it was from a quarter of the way, all the way up to three-quarters of the way up to the airfence. It was definitely different. It might have been more like old school '80s racing, and those guys were fast last year. I think the track had some grip with the engine program they had from last year and they took advantage of it.

“It's hard to say what track we'll get this year, but I think either scenario we'll be pretty good. The thing is a lot easier to ride now, and all three guys have had success at Springfield.” 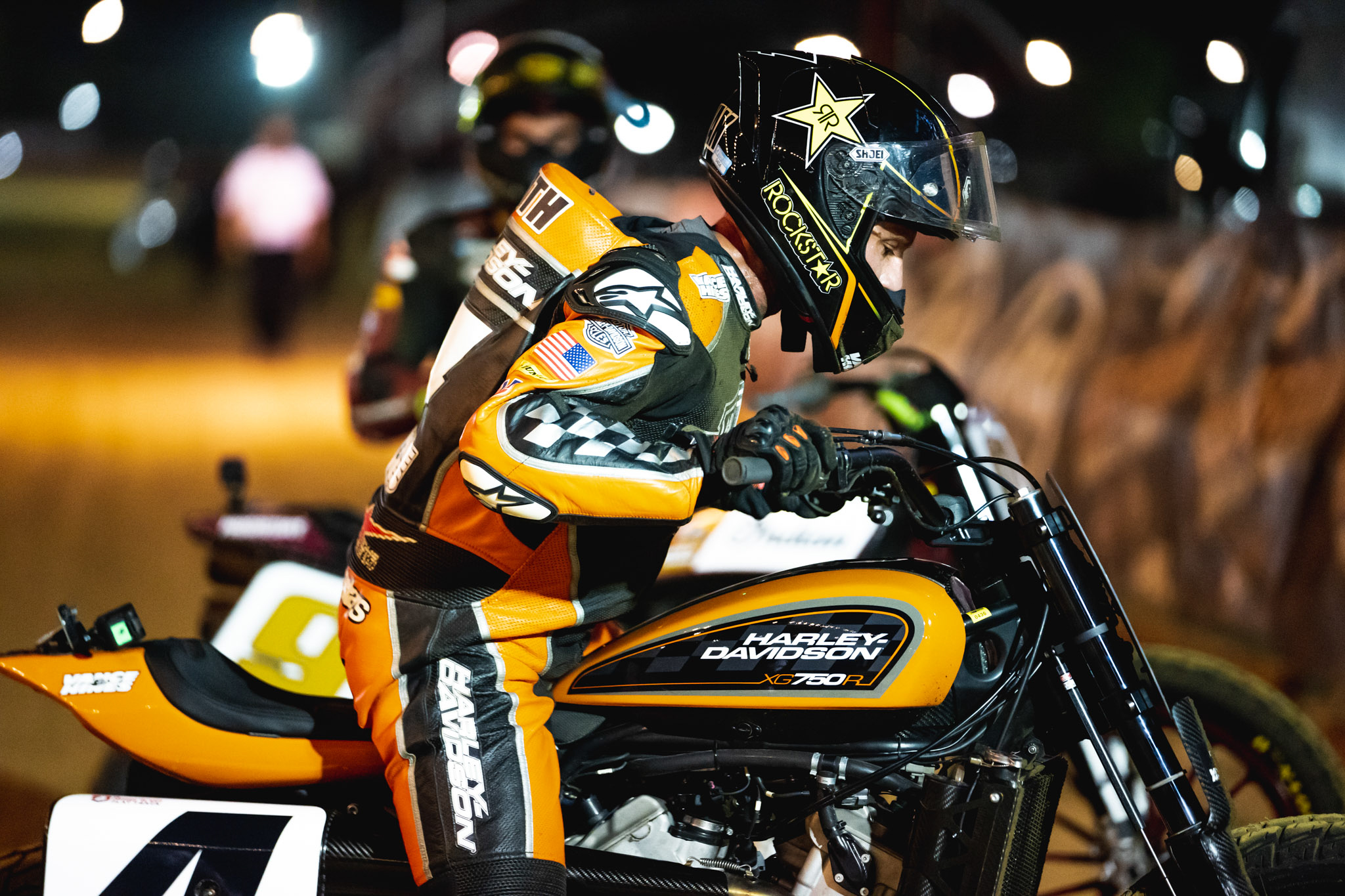 As strange as it seems, the reality of the COVID schedule revamp means that Springfield represents the final Mile on the ‘20 calendar and the sole remaining opportunity for the “Mile Master” to exploit his particular brand of strategic genius on a big track this season.

When asked if there was a sense that they needed to strike now and strike fast, Howerton hedged.

“Yeah, we want to win as quick as we can just to get Harley back up on the top. But Bryan is awfully good at a lot of places. We'll go to Charlotte, and he's won two out of three races we've done there.

“He's always discounted as not being a Half-Mile guy, but since I've been involved, he's probably had the hardest bikes to ride on a Half-Mile. The Kawasaki made a lot of power pretty quick and he had to learn how to ride that thing. That has probably helped him on other brands, both to adapt and to get the power curve what it needs to be.

“And I honestly think the other guys will come into their own at some of the other tracks too. Dalton is getting better every time he gets on the bike, and Jarod should be really strong on some of the Half-Mile groove tracks.

“The Indian has so many guys on it that it basically gets free development time. That makes it tough to chase that thing down, but I think last weekend was a huge step toward that.

“I don't see any reason why all of our guys can't be pretty competitive every weekend no matter where we go.” 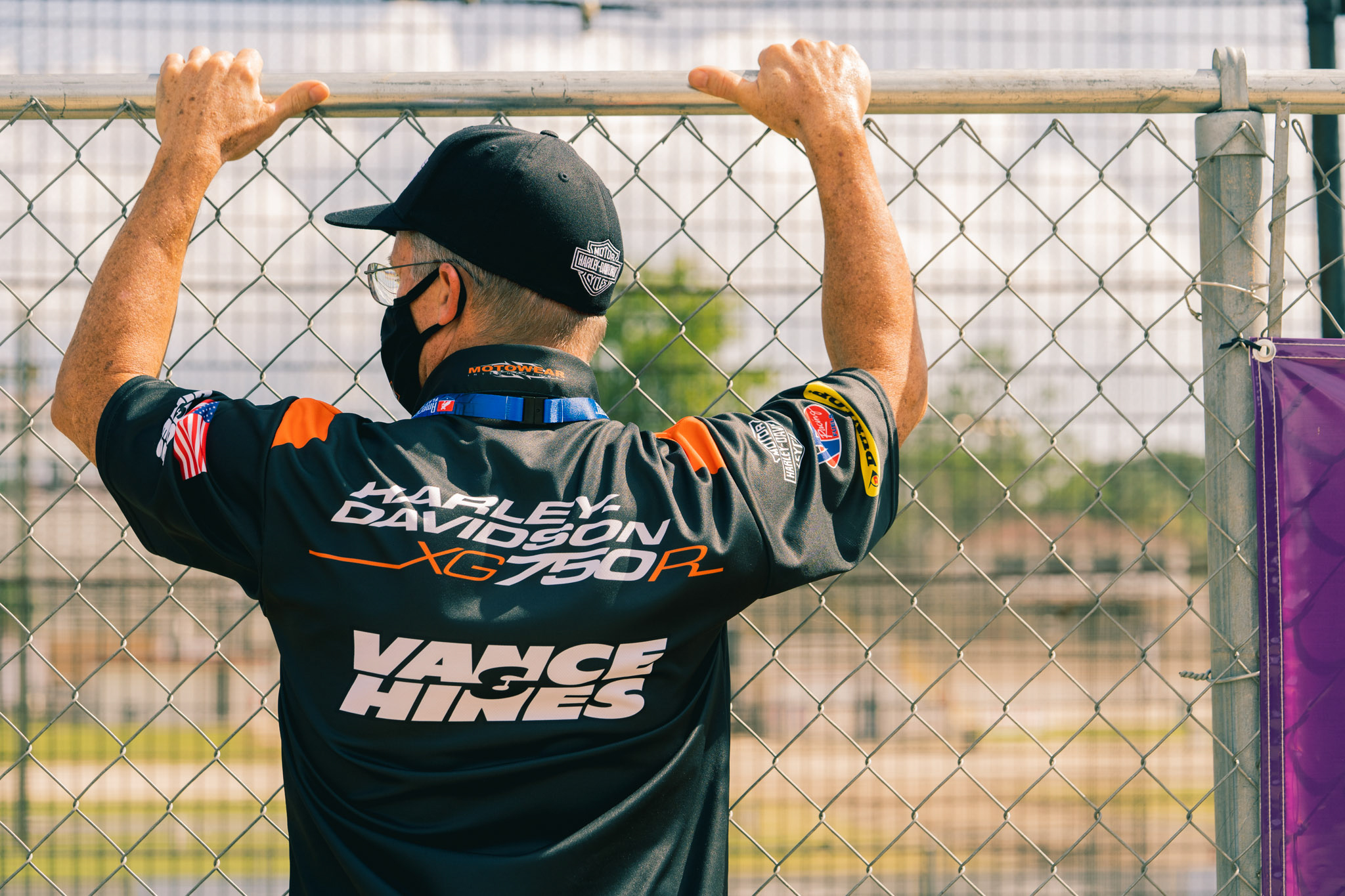