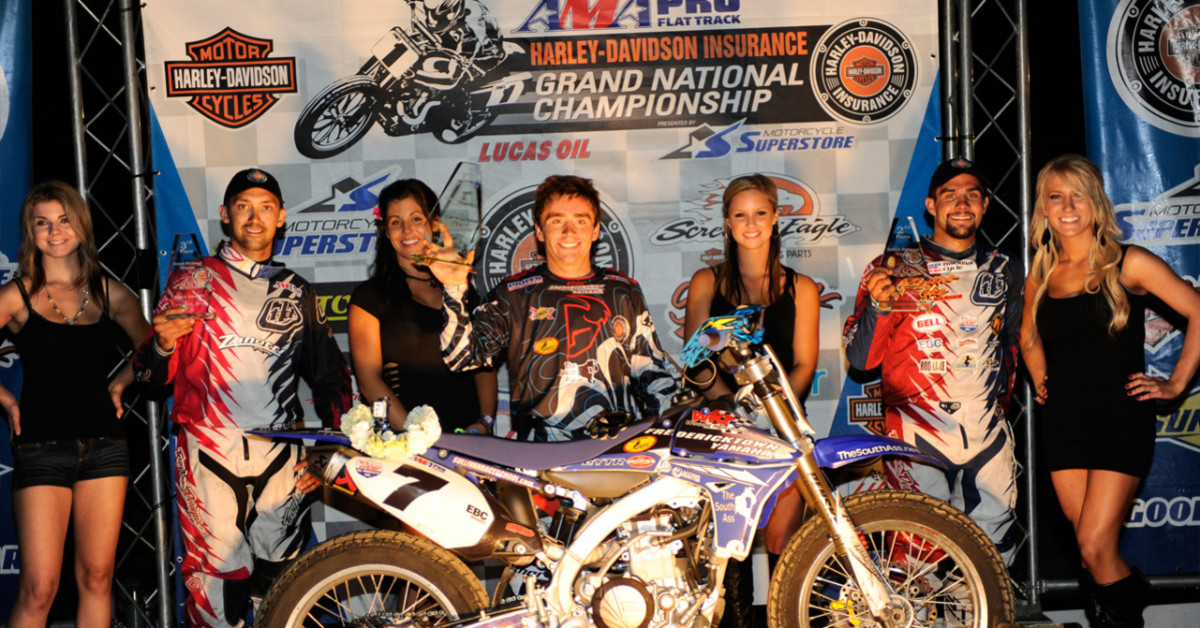 CASTLE ROCK, Wash. (August 4, 2012) - Being from the state of Washington, Sammy Halbert (Fredericktown Yamaha) did not disappoint his hometown crowd as he won tonight's AMA Pro Harley-Davidson Insurance Grand National Championship presented by Motorcycle-Superstore.com and Lucas Oil race at Castle Rock Race Park in a landslide. A large mass of viewers all over the nation, as well as a packed house in Castle Rock, Wash. witnessed Sammy Halbert kick off the second half of the season with a win. Halbert was last year's winner at this very race and is the first rider to win two races this season in AMA Pro Flat Track's premier class.

"This is awesome, I have to give it up to the local crowd for coming out, you guys fired me up and helped me get the win." Halbert said. "I just got a good start and stayed focused the whole time. It feels great. We got to keep this thing rolling; I'm fired up and want to carry this momentum to next race."

Coming off a solid restart after Brandon Robinson bit the dust, Halbert took the lead and never looked back as he was the clear-cut winner and was barely contested the entire way. With five laps remaining, Jared Mees (Rogers Racing / Montgomeryville Honda) was the only rider in Halbert's vicinity but was never really a threat as Halbert continued his dominance at Castle Rock Race Park and got to enjoy the sweet taste of victory for the second time this season. Mees and Jake Johhson (Zanotti Racing) closed out the podium, respectively. Jethro Halbert, Sammy's brother, claimed the fourth slot of the main event with J.D. Beach closing out the top five.

AMA Pro Motorcycle-Superstore.com Pro Singles
As for the single engines, Jacob Lehmann (Spy Optics) took advantage of several restarts and claimed his first ever career victory. After Wyatt Maguire's crash called out a red flag, Lehmann shot out of the restart like a torpedo and maintained the lead for the entire race. Second place finisher Rodney Spencer (831 Pinnit) was Lehmann's only competition of the night as they both ran away from the pack and were neck and neck for the final three laps. The battle for third also proved to be an intense race as Dominic Collindres (Frankie Morris) edged Jake Shoemaker (Montgomeryville Cycle Center) and Garret Callies (Fun Mart Cycle Center) to close out the podium.

"I just came out hoping that I can at least come in the top ten and make the main event." Lehmann said. "I got lucky on the restart and I was just thinking please don't red flag it again. I was just trying to get a gap on the last few laps so I could have room to breathe but Spencer just kept creeping up on me."

AMA Pro Live Streaming Coverage
Saturday's AMA Pro Harley-Davidson Insurance Grand National Championship presented by Motorcycle-Superstore.com and Lucas Oil event was the birth of a significant milestone for AMA Pro Flat Track. For the first time ever in the storied history of dirt track racing, cameras planted at three separate vantage points were successful in producing a live video feed directly to www.amaprolive.com for fans to observe in real time as the action unfolded.

Next Up
The stars of AMA Pro Flat Track will return to Peoria, Illinois on August 11, 2012 for another TT event. For tickets and information, please visit http://www.peoriatt.net/.