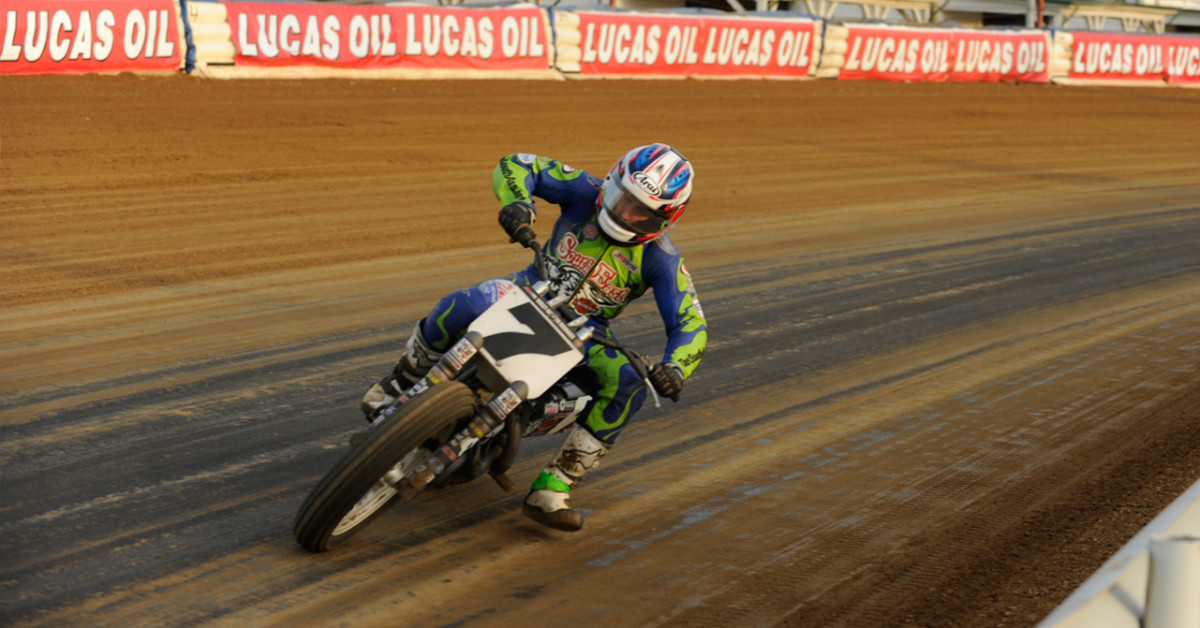 Halbert Goes the Distance at Indy

INDIANAPOLIS, Ind. (August 18, 2012) - Saturday's AMA Pro Harley-Davidson Insurance Grand National Championship presented by Motorcycle-Superstore.com and Lucas Oil gave the packed house a sensational race as Sammy Halbert (South East Harley/Harley-Davidson) captured the checkered flag for the third time this year. Though Halbert looked sharp under the lights at the Indianapolis State Fairgrounds, it was no easy task as he was forced to fend off fierce competitors in Brandon Robinson (Werner/Kawasaki) and Jared Mees (Rogers Racing/Harley-Davidson) on the last lap for the win.

"I didn't see that one coming, luckily for me, the win fell in to my hands. The whole time I was just trying to figure out how to pass those fast Kawasakis," Halbert said. "In the end I just pulled up behind Brandon (Robinson) trying to get a good draft and when I did I just hammered down and went with it. I was just hoping and praying on that last straight away that I could get through it and I did. It feels amazing; don't count me out, ever."

Bryan Smith (Howerton Motorsports/Kawasaki) looked to be on his way to another dominating victory but a rare wreck by Jake Johnson forced a restart. Though Smith retained the lead shortly after the restart, his bike came up lame on the 12th lap and ended his night.

Smith's mishap was like blood in the water for sharks as it changed the complexity of the race tremendously. Brandon Robinson had the lead going in to the final three laps and looked like he was going to pull it off. Sammy Halbert, however, had other plans, as he stole the lead on lap 23 and fought off Brandon Robinson on the final straight away for the victory.

It became evident right from the get-go that Indianapolis is the racing capital of the world as the crowd's roar was almost as loud as the engines. Sammy Halbert fended off Brandon Robinson by a mere .26 seconds; that's quicker than you can snap your fingers.

AMA Pro Motorcycle-Superstore.com Pro Singles
Stephen Vanderkuur (Parkinson Brothers Racing/Honda CRF450R) slammed the throttle just a little bit harder than his opponents Saturday night as he came away with his first win of the season. The race was a 12 lap roller coaster as there was an immense number of lead changes that came down to the final stretch. The win bumps Vanderkuur to first in the standings with a slim two point lead over Ryan Wells (5 Star Steel & Fabrication) and looks to be one of the favorites to win the title going in to the final four races of the season.

"It was an awesome race, I knew I had to get a good restart and I did," Vanderkuur said. "I knew there would be a bunch of passing and that I was going to have my work cut out. It was a toss-up and I just went for it. I gave it my all and I'm just so excited."

Dominic Collindres (Weirbach Racing) took an early lead coming off a restart but maintained it only for a lap as no lead was ever safe in the race. Going in to lap 5, Collindres, Vanderkuur, Zakk Palmer (Double Dick Bandits), and Jake Shoemaker (Montgomeryville Cycle Center) were four wide as they flew down the back stretch. Going in to the last lap it was literally neck and neck, with the winner being a presumed toss-up between the four. It wasn't until the last stretch that Vanderkuur crossed the finish line with a photo finish victory.