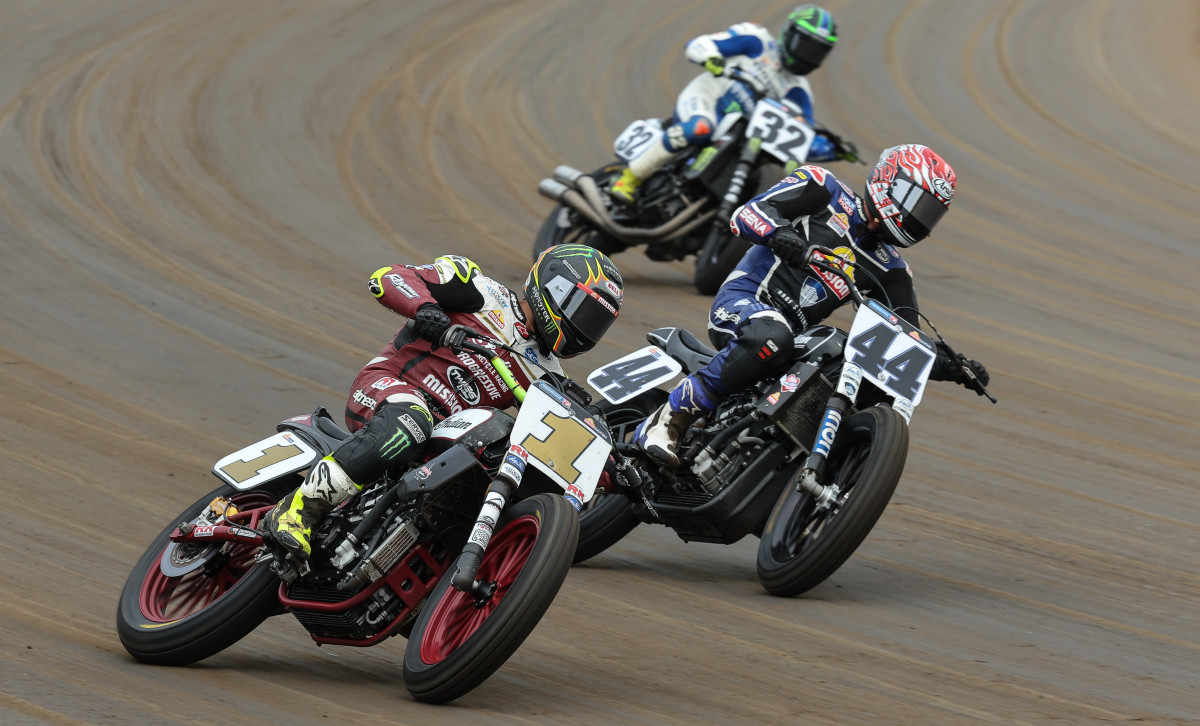 The round is guaranteed to have massive title implications, particularly in the Mission SuperTwins presented by S&S Cycle category where 50 of the season’s final 100 points will be up for grabs in a single evening featuring two premier-class Main Events.

Despite being a new venue for the tour, Cedar Lake Speedway is well suited for its temporary status as the center of the two-wheeled dirt track world. The state-of-the art, ⅜-mile high-banked clay oval traces its history back nearly seven decades and is both situated only an hour away from Indian Motorcycle’s Minnesota-based headquarters and set in the home state of Harley-Davidson and Royal Enfield North America.

Reigning Mission SuperTwins champion Jared Mees (No. 1 Indian Motorcycle/Progressive Insurance FTR750) comes in with the points advantage, thanks to a trio of early-season wins and a steady second half in which he’s landed on the podium in five of the last six races.

With no prior track history to lean on for insight, the potential for spoilers who could further impact the title fight seems especially rife. Brandon Robinson (No. 44 Mission Roof Systems Indian FTR750) is currently ranked fifth in the points and boasts a Main Event win this season. Meanwhile, Jarod Vanderkooi (No. 20 Mission Roof Systems Indian FTR750) – who is still seeking a maiden Mission SuperTwins win – earned podium finishes at each of the season’s two previous Short Tracks, while Bronson Bauman (No. 37 Latus Motors Racing Harley-Davidson XG750R) claimed his first win at the Laconia Short Track back in 2019.

With the recent addition of a second day of racing at the Mission Volusia Half-Mile Finale, Jesse Janisch (No. 33 Vance & Hines Harley-Davidson XG750R) lost the chance to clinch Mission Production Twins presented by Vance & Hines championship in his home state. Nevertheless, he can still take major strides toward his first-career Progressive AFT championship with a strong showing as the home favorite.

Realistically, only a pair of mechanical issues this season have prevented Janisch from being in position to wrap things up early. Outside of those two aberrant outings, Janisch and his XG750R have been consistently at or near the front at Miles, Half-Miles, TTs, and Short Tracks alike, racking up six wins among eleven podiums this season. There’s little reason to expect things to be any different at Cedar Lake Speedway.

However, defending class champion Cory Texter (No. 1 G&G Racing/Yamaha Racing Yamaha MT-07) made up some ground last time out, narrowing the deficit to 17 points with three races remaining. While he no longer controls his own destiny, Texter wouldn’t need much outside help if he were able to do his part.

Should Texter win the season’s final three races, Janisch would need to finish as runner-up in all three to avoid being overtaken in the points standings. It’s a tall order to ask Texter to apply the pressure on Janisch in such a sweeping manner, but it’s certainly not out of the question either.

Texter will most likely look to the likes of Dan Bromley (No. 62 Memphis Shades/Corbin Seats/Vinson Construction Yamaha MT-07), Michael Rush (No. 15 Hellipower Racing/Las Vegas Harley-Davidson XG750R), Cameron Smith (No. 34 Thee Cathy Gray/Al Barker Royal Enfield 650), Billy Ross (No. 109 Mission Foods/Roof Systems Harley-Davidson XG750R), Nick Armstrong (No. 60 Competitive Racing Frames/Lessley Brothers Yamaha MT-07), and Johnny Lewis (No. 10 Moto Anatomy X Powered by Royal Enfield 650) for help, each one of whom has demonstrated the capacity to finish first or second at one point or another this season.

If any rider is going to leave Wisconsin with a shiny new #1 plate, it’s most likely going to be Parts Unlimited AFT Singles presented by KICKER star Kody Kopp (No. 12 Red Bull KTM Factory Racing 450 SX-FFE).

It sounds easy enough, but considering the aforementioned company, Kopp may need to win, or at least podium, to pull it off. The KTM ace does boast six wins and eight podiums on the year, but he’s finished off the box in four races running.

While no other rider has a mathematical shot at the crown, there’s still plenty of motivation further down the order. For example, Trent Lowe (No. 48 Mission Foods/Al Lamb’s Dallas Honda CRF450R) and Chase Saathoff (No. 106 American Honda/Progressive Insurance CRF450R) are each seeking a career-first Progressive AFT win, and both have flashed the potential to score elusive triumphs on more than one occasion in 2022. There are previous few opportunities left to stand atop the box this season, further ratcheting up the pressure with the season’s end in sight.

There will be plenty to keep fans entertained off the track as well, including live music, numerous vendors, food and beverage options, the Kids Zone, and fireworks display to cap off the evening.

Visit https://store.americanflattrack.com/ebooking/ticket/view/id/3901/ to reserve your tickets today. General Admission Grandstand tickets are just $25 (kids 12 and under free with a paid adult ticket), and fans are offered a variety of premium tickets and other options to choose from, including Reserved Grandstand and VIP Experience tickets, Reserved Trackside Parking Add-Ons and a number of Camping Pass options.

Paddock Access Upgrades are also available for purchase, which provide all-day access to the pits where fans can scope out the world’s fastest dirt track motorcycles and get up close and personal with the stars of the sport.

Gates will open for fans at 4:30 p.m. ET/1:30 p.m. PT with Opening Ceremonies scheduled to begin at 8:00 p.m. ET/5:00 p.m. PT, followed immediately by the evening’s first Mission SuperTwins Main Event. You can catch the livestream of all the weekend’s racing activities on FansChoice.tv. FansChoice.tv provides free-to-view livestreaming of Practice and Qualifying. FansChoice.tv subscribers will then be able to watch the drama unfold from Opening Ceremonies through the Semis, Main Events, and podium celebrations. FansChoice.tv offers two subscription options, granting unlimited access to premium AFT content. Monthly subscriptions start at just $7.99, while a six-month subscription is available for $44.99.

The Drag Specialties Cedar Lake Short Track will premiere on FS1 on Sunday, October 2, at 10:30 a.m. ET/8:00 a.m., including exclusive features, cutting-edge aerial drone and onboard footage, and expert commentary.