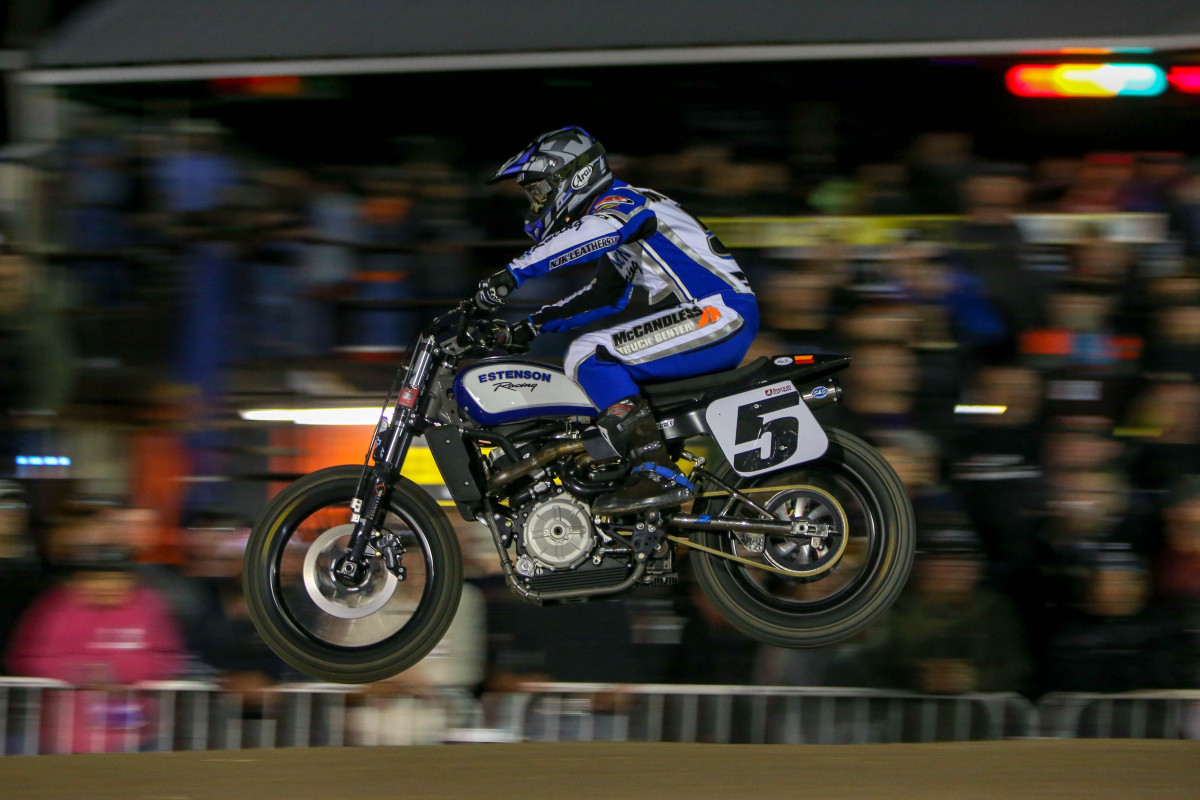 STURGIS, SD (August 5, 2018) – Jake Johnson delivered a virtuoso performance to reign supreme in front of a wildly enthusiastic crowd of Sturgis Rallygoers who packed the house for Sunday evening’s Buffalo Chip TT presented by Indian Motorcycle, Round 12 of 18 of the 2018 American Flat Track championship.

But in order to do so, Johnson (No. 5 Estenson Racing/McCandless Truck Center Indian Scout FTR750) was forced to do the impossible – namely, track down and overtake reigning AFT Twins presented by Vance & Hines champion Jared Mees (No. 1 Indian Motorcycle Rogers Racing SDI Scout FTR750).

Mees inherited the lead after last year’s Buffalo Chip winner Briar Bauman (No. 14 Zanotti Racing Kawasaki Ninja 650) crashed and collected second-placed Jarod Vanderkooi (No. 20 Harley-Davidson Factory Flat Track Team XG750R). Mees appeared to have a clear path to his 10th victory of the season, but Johnson chased him down and overhauled him with relative ease at about the halfway point in the 25-lap Main.

From there Johnson controlled the contest en route to his fifth career TT victory. Mees narrowly held second, being forced to defend the position from Sammy Halbert (No. 69 Harley-Davidson Factory Flat Track Team XG750R) to the checkered flag.

Johnson couldn’t have asked for a better environment to return to the top of the podium. In only its second year, the Buffalo Chip TT furthered its near-instantaneous claim as one of the genuine destination events on the AFT calendar. Some 10,000 raucous fans again jammed the fences around the purpose-built TT circuit laid out on the fabled Buffalo Chip Campgrounds to lend the evening a rock concert-like atmosphere.

And that was fitting, because the race action effectively served as the ultimate opening act for Theory of a Deadman, who took to the stage immediately following the podium ceremonies to keep a memorable Sunday at the 78th Annual Sturgis Motorcycle Rally rocking late into the night.

Johnson, AFT’s undisputed rock star of the evening, said, “I got a bad start and thought my night was over as soon as the green light went. Still, I was patient. There were guys jamming and crashing up front. But after I caught Jared, I couldn’t wait. The door opened and I had to take it. Luckily I was able to put some good laps in and get a bit of breathing room.

“I’m not going to lie,” Johnson added. “Those last five laps I was holding my breath. It’s been a long time since I’ve won one of these.” The victory was Johnson’s first since the opening weekend of the 2016 season. It was also his first aboard an Indian.

Despite the rare defeat, Mees continues to dominate the championship fight. His Sunday runner-up finish saw him open his points lead up to a head-shaking 85 points.

Tourist Trophy races frequently provide an opportunity for specialists and series part-timers to shine, and Sunday’s undercard Main Event in the AFT Singles division was certainly no exception.

Sipes, a Supercross race winner and America’s first-ever ISDE overall winner, got the holeshot ahead of Lehmann and Frederickson, and it proved crucial. Lehmann hounded Sipes throughout, but the ex-motocrosser used his superior skills over the jump – pulling wheelies prior to each launch to keep his trajectory low – to build just enough of a gap to prevent Lehmann from mounting an assault for the lead. Sipes held the position to the flag, adding a Grand National Flat Track race victory to his extensive racing resume. 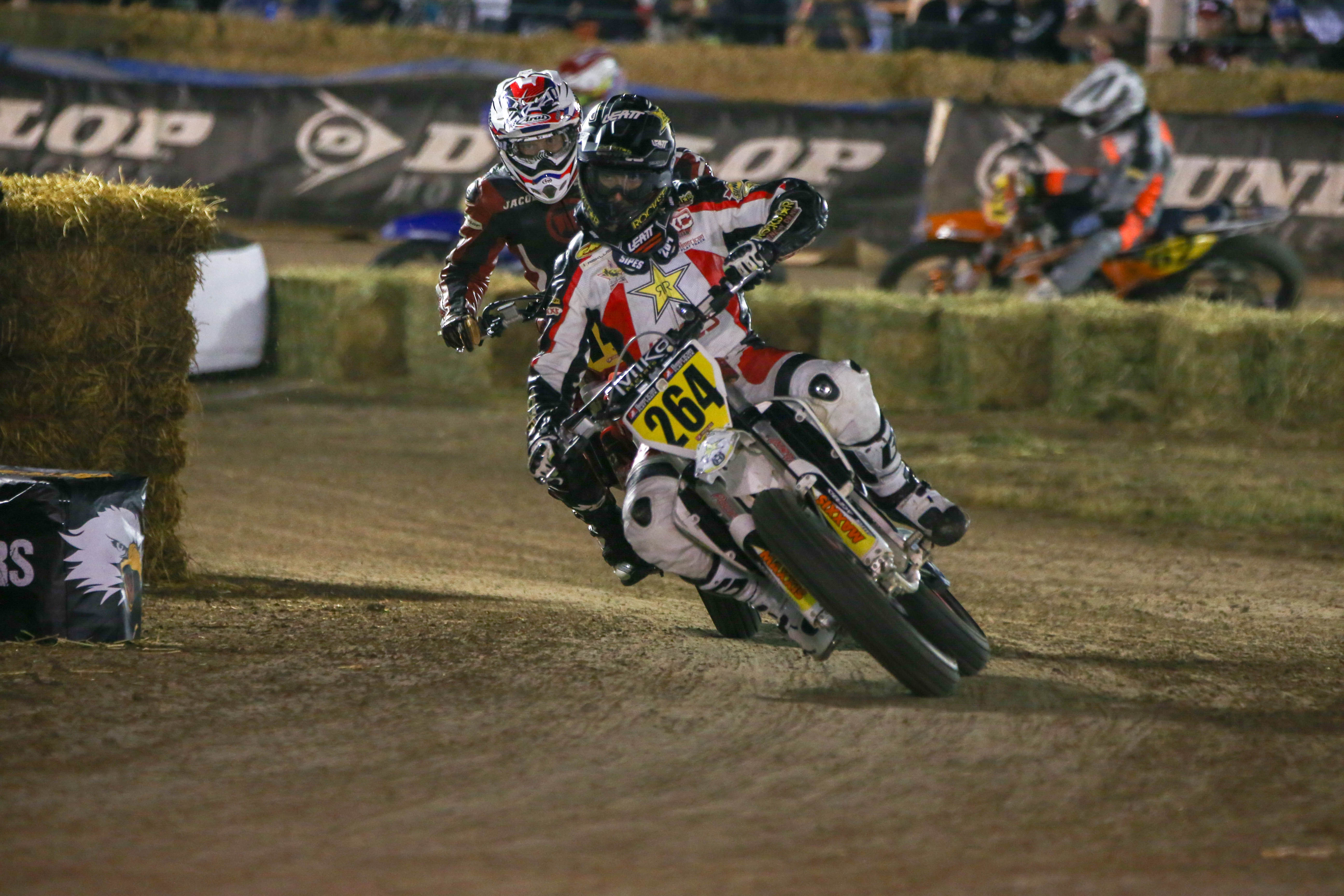 Motocross and off-road champion Ryan Sipes shocked the world with his wire-to-wire win at the Buffalo Chip TT.

Runaway title leader Dan Bromley (No. 62 KTM North America/Bromley Motorsports 450 SX-F) was the best of the championship contenders, finishing fourth. As a result his advantage now stands at a massive 52 points.

Conversely, the title hopes of Shayna Texter (No. 52 Husqvarna Motorcycles/JCS Racing FC 450) took a significant – if not entirely unexpected – hit at the Buffalo Chip. The continued TT difficulties of the class’ all-time winningest rider cost her yet again, as she failed to advance to the Main and scored no points on the evening.

Meanwhile, last year’s championship runner-up Brandon Price (No. 92 Parkinson Brothers Racing/DPC Racing Honda CRF450R) made his highly anticipated return to action on Sunday. Price was injured in a scary crash at the tour’s prior TT race in Springfield and missed five consecutive Main Events while on the mend. In what has to be considered a successful comeback effort, Price made his way to the Main where he finished 10th. Despite his considerable layoff, he continues to rank seventh in the points.

For a thoroughly in-depth experience with flag-to-flag coverage of both Main Events enhanced by drone and onboard footage, be sure to catch the feature telecast of the Buffalo Chip TT when it debuts on NBCSN at prime time on Saturday, August 11 at 8:30 pm ET (5:30 pm PT).

Gates open at 2:30 pm MT (4:30 pm ET), with live coverage of practice, qualifying, Heats, Semis and the AFT Twins and Singles Main Events beginning at 3:00 pm MT (5:00 pm ET) on FansChoice.tv. If you can’t make the race or watch live on FansChoice, be sure to catch the NBCSN’s feature coverage of the Black Hills Half-Mile premiering on August 18 at 5:00 pm ET (2:00 pm PT) on NBCSN.