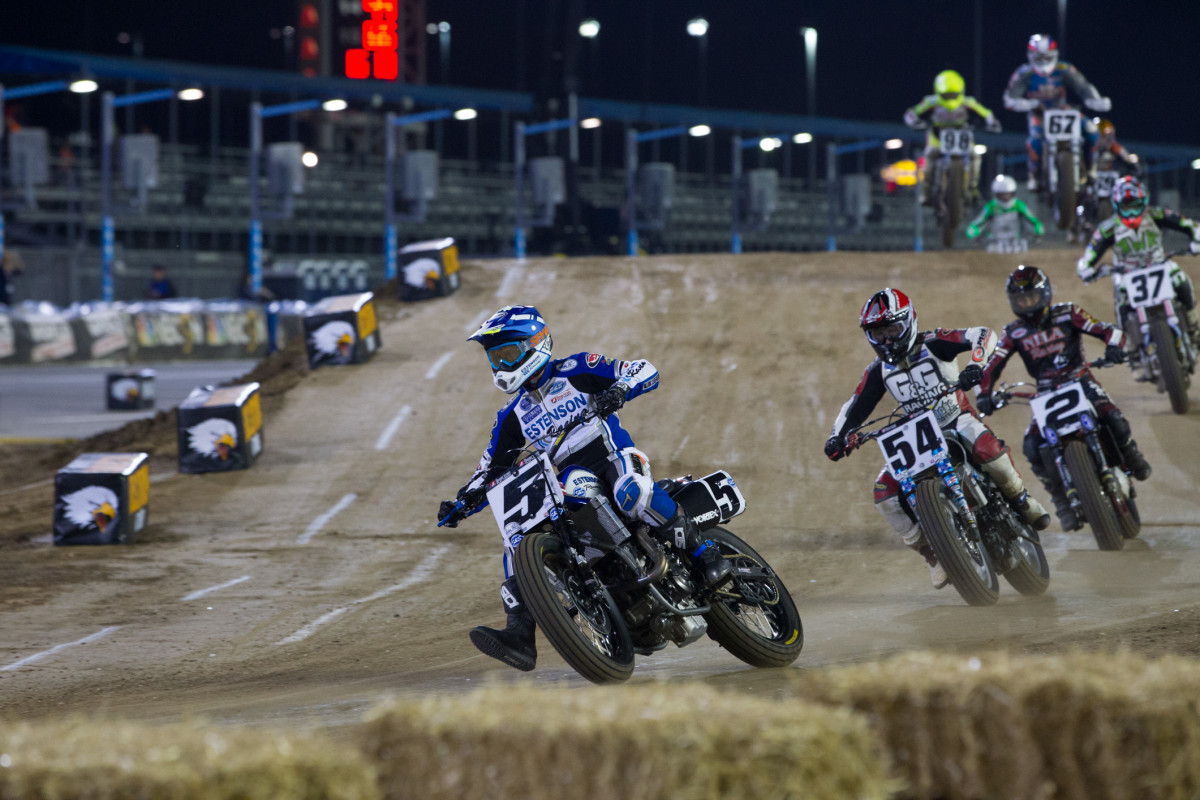 Jake Johnson off to a good start with Estenson Racing, Kolby Carlile looks ahead to Atlanta Short Track

The following is from Estenson Racing...

After months of preparation, Estenson Racing was back in action at Daytona International Speedway for the American Flat Track season opener, the Harley-Davidson TT presented by Russ Brown Motorcycle Attorneys at DAYTONA, on March 15.

Two-time Grand National Champion Jake Johnson got off to a great start in his first outing with the team on the Yamaha FZ-07. He had a solid top five in qualifying, a second-place finish in his Heat and third in the Semi. In the AFT Twins Main, Johnson didn’t get the start he had hoped for and got caught up in traffic, allowing the lead five riders to pull away. He was getting closer to the lead pack, but started to have some moments. With lots of racing ahead this season, Johnson has the experience to know discretion is the better part of valor at Daytona.

On the AFT Singles side of the garage, the day started out great for Kolby Carlile with solid qualifying results and a dominant Heat race win on the Yamaha YZ450F. Unfortunately, it all went wrong in the Semi when another rider came together with Carlile on the start and put the reigning champ on the ground. Carlile was able to rejoin the race and made an heroic effort to come back from the back of the grid and finish seventh, earning a transfer to the Main event.

With his goal of repeating his championship of a year ago in mind, Carlile decided it was best to opt out of the Main and seek medical attention as a precaution. Although he is feeling a little beat up, Carlile is focused on preparing for round two in Atlanta in three weeks’ time.

“I felt good all day. Come Main event time, I just got a bad start and got battling with a few guys on the first lap. Once I got clear the top five were gone. Seemed like for a little bit there I started chipping away at it [the gap] and felt like I was getting a little bit closer, but then I started having some big moments. There were a lot of opportunities to end up on the ground. We somehow got through it. Obviously, I was hoping to come away with more, but for Daytona… a new team, new bike and with a limited amount of time on it; I’ll take it. You can’t win it in Daytona, but you can sure lose it. So we’re still there. We learned a lot today. We’ll just keep plugging away.”

“My team did a great job prepping my YZ. I felt great on the bike all day, and won my Heat. It’s really disappointing what happened, because I felt that I was in a good place to take the win last night. But Daytona is Daytona. We’re going to put it behind us and focus on the other 17 rounds.”

Catch the DAYTONA TT as American Flat Track makes its debut in its new time slot for 2018 on NBC Sports, March 25 at 2 pm ET. Racing resumes on April 7, for round two of the season at the Atlanta Short Track in Woodstock, Georgia. Click here for tickets: https://www.showclix.com/event/atlanta-short-track