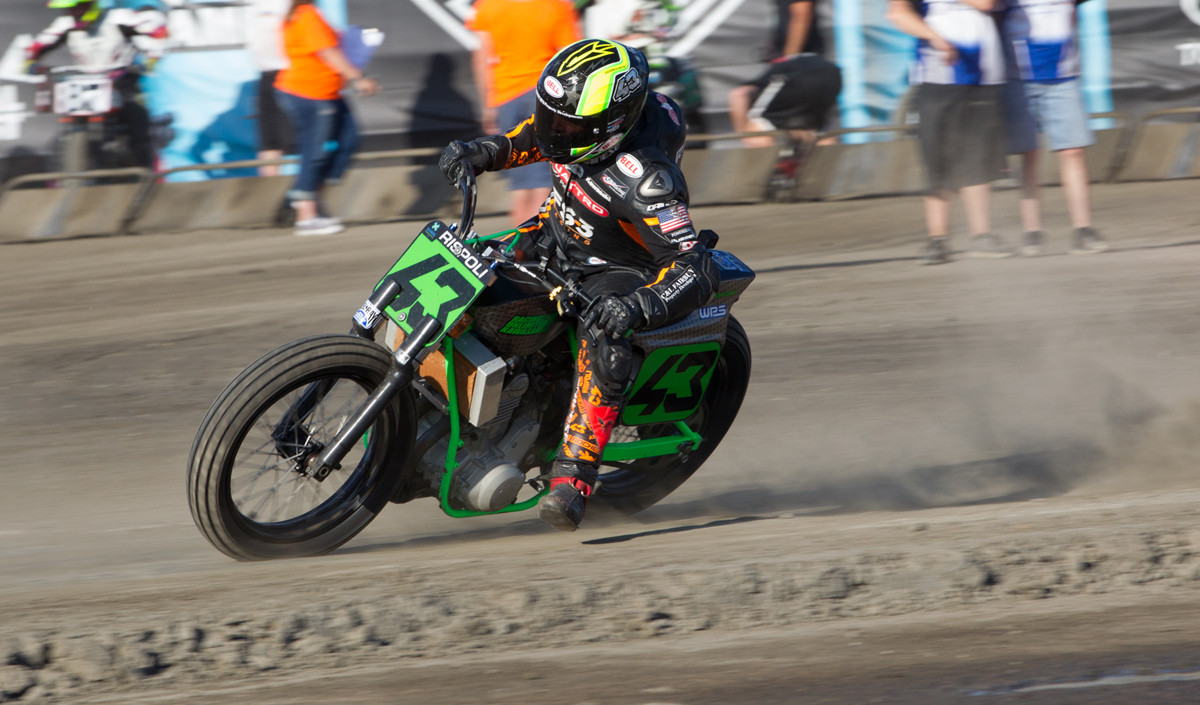 Road racer James Rispoli is spending his time away from his day job – the British Superbike Series – to return to his flat track roots this week and race X Games Harley-Davidson Flat Track. We had a moment to catch up with “The Rocket” and ask him about putting a steel shoe on again.

How long has it been since you’ve done flat track?

I think it’s been 2011, to be honest… I think was the last national I did. I got third, I think. I don't remember the exact date, but it’s been plus five years.

This is my second time ever on a twin, so I’m stoked. I’m really pumped just to be here and actually not be just a mobile chicane and actually be able to ride with some of these guys. I made a pass under some good dudes. That was cool.

I feel at home, actually. I don’t feel too foreign from it. For us, luckily I’ve got good fitness from racing and BSB (British Superbike Series) and whatnot. I don’t feel stiff or anything. I feel really loose on the bike. We’ve got a good package with Racing Unlimited Kawasaki. We’re just looking to upset some people. We’ve got great starts at the moment. I know that’s going to be key. My biggest thing is just to get a start and just be as wide as possible. If I’m the slowest guy, I’m going to be the hardest guy to pass. I’m making that main.

It’s dirt track, not road racing, but you’re used to racing in a highly competitive field in the British Superbike Series. Do you feel that raises your game a little bit no matter what you do in racing?

Yeah, and to be honest my dirt track skills haven’t failed me. I did do it for a long time. It’s what I did growing up for the first 16 years of my career, so it’s not like I don’t have it imbedded in my blood.

I think this track is actually coming into us a little bit more. Some of the Harley’s seem to be doing well. I think if the top line, the outside of the track gets a little bit worse I think that will help us because we struggle a little bit in the corner on the Kawasaki. Either way, I think if we can get a start we can actually be an upset. I think right now, I don’t think we’re looked at like an idiot, so I’m happy.

You and your boy Ryan (Wells) grew up together, now you’re racing together in the X Games.

It’s cool. It’s like full-circle. I’ve helped Ryan. Our family has helped Ryan since he was nine years old. We grew up doing 100-lap XR100 mains at his house in his back yard just practicing. It’s super cool to see him on a real team and with amazing bikes and a good crew and whatnot and racing in the top 10, top seven pretty much every weekend against the best dudes in dirt track in the world.

We’re staying in the same room. He’s staying in my room. So, it’s just cool to be here and to kind of bro out for a week and race against each other… even though I can’t let him beat me.