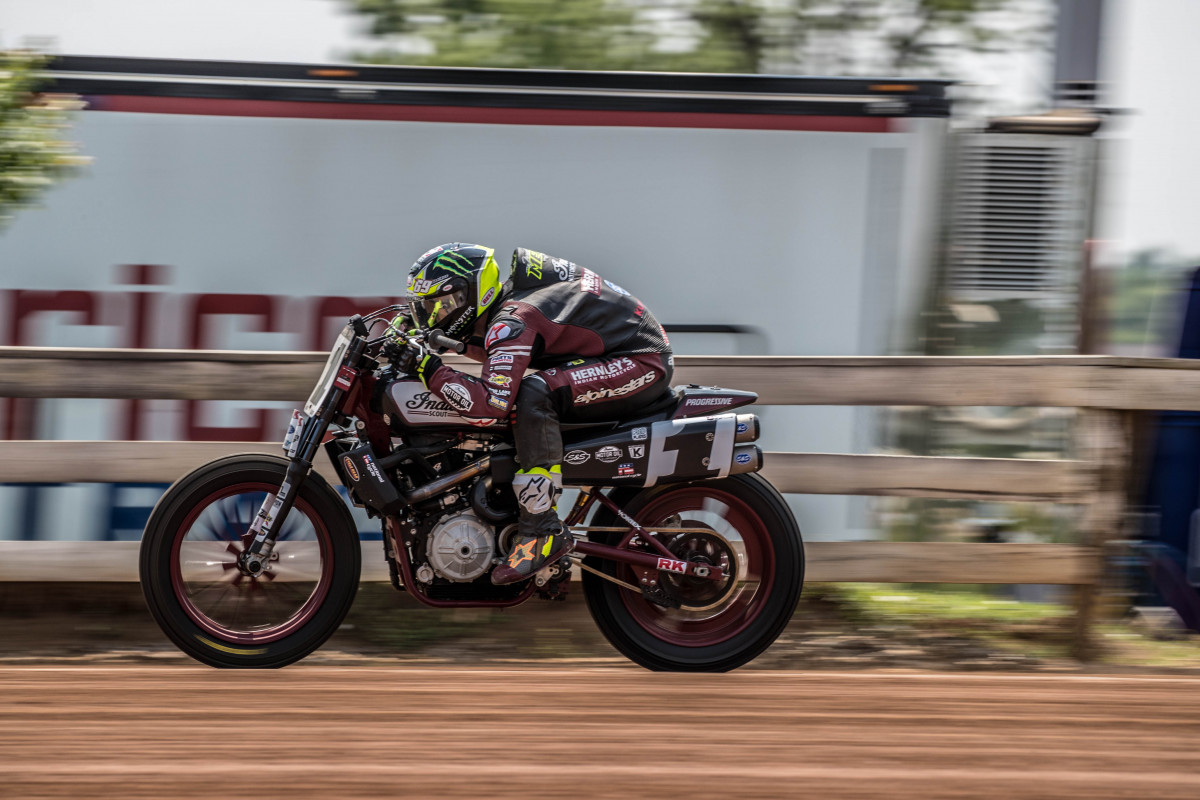 Jared Mees: Jammin' His Way Back to the Front

The Jammer. The Machine. The next GOAT. Jared Mees – defending six-time AFT Twins presented by Vance & Hines Champion – has been called many things over the course of his 17-year professional flat track career.

At the close of the 2018 season, the man – because he is, after all, simply a man – had racked up a staggering 366 points (leaving a 93-point chasm between him and second place finisher Henry Wiles), ten wins that season and an impressive 40 total career wins.

By this time last season, Mees had won all but two events, one of those being a result of a DQ due to failure of a post-race technical evaluation and the other yielded a still-impressive second-place finish.

Nearly any fan of professional flat track would agree that to watch Jared Mees compete is very likely to watch a legend in the making.

Prior to this year’s Red Mile event, Mees had experienced more than his typical share of hiccups: a mechanical during the main event of the DAYTONA TT, P3 at the Arizona Super TT and a salvaged fifth-place finish at the So-Cal Half-Mile (after a day’s performance which left him gridding up in the back row for the Main.

“You have to put some things into perspective,” said Mees. “DAYTONA was DAYTONA – I was never going to win that one, although we were marching towards the front before we broke. That set me behind the eight-ball right off the bat. 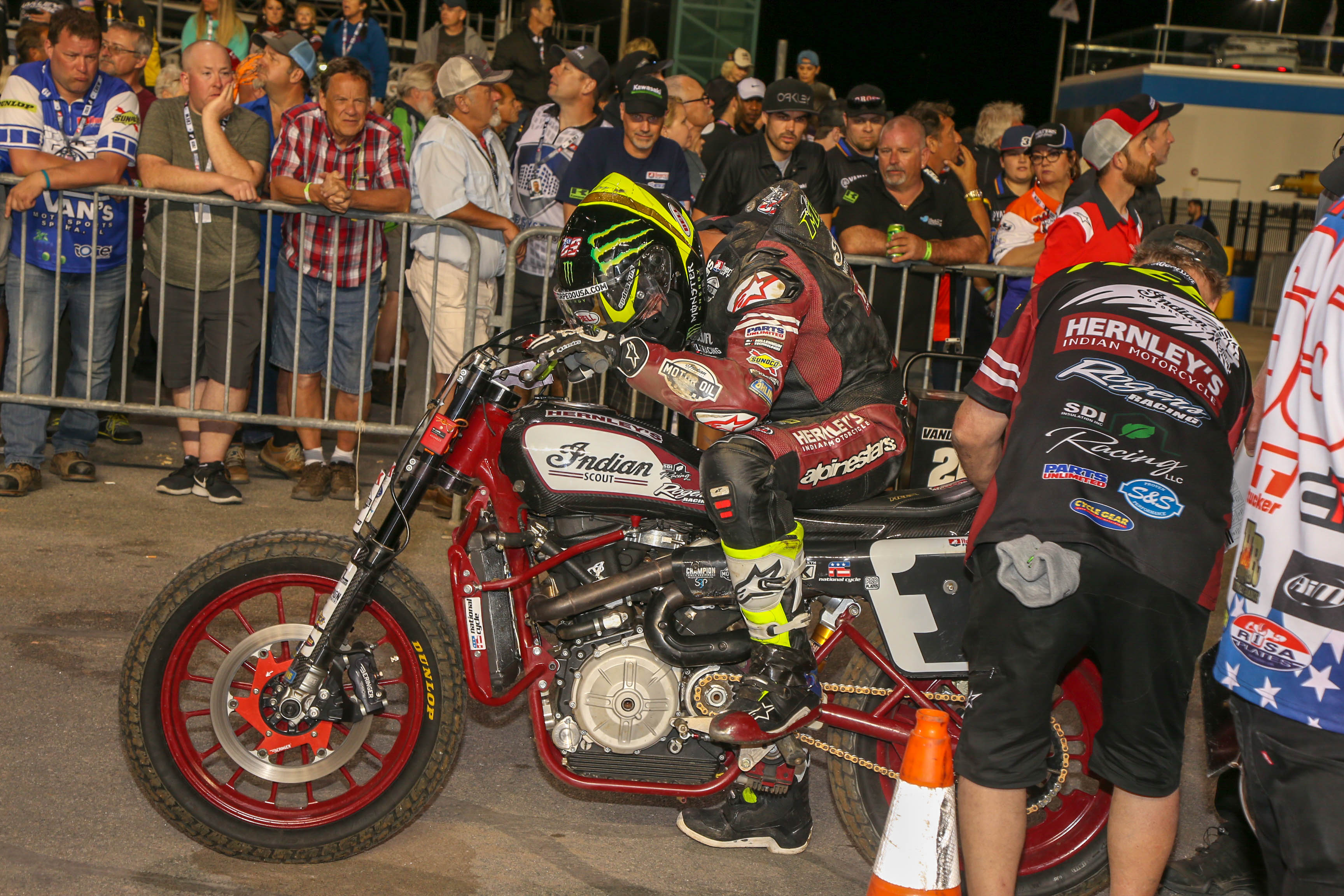 Mees and Crew Chief Kenny Tolbert inspect his FTR after a spill in DAYTONA.

“Arizona, you went from one extreme to the other. Last year we ran a Mile, where I won, and this year it was a TT, which is a completely different deal. I’d say that while I’ve won a couple of TTs, they are definitely the type of track where I’ve been the least dominant in my career.

“The one where I felt we were most off our game was Perris [the So-Cal Half-Mile]. The story there is we went there a year ago and tested and found out a couple of things that I thought would really help us when we finally got to race there. Well, come race day, the track was almost 180 degrees different from when we had tested there the year prior. We waited so long on race day to move away from the bike setup we had discovered testing, that we were already on the back row, in a bad position. I hate to say it, but I guess I put myself in a bad spot due to actually testing – it hurt us.”

After being conditioned to seeing Mees on the box week in and week out, many were left wondering if Mees’s days of dominance had come to an end.

Mees clocked an immense speed gap and held it firmly throughout the day, his fastest lap time an impressive 36.795 seconds during the fourth lap of Semi 1. While teammate Briar Bauman proved a worthy competitor to Mees in the night’s AFT Twins Main, Mees – the only AFT Twins rider ever to win at the Red Mile – held firmly to his line and rode that missile of an Indian Motorcycle straight to the top of the podium for the third consecutive year.

“We showed up there in 2017 with a setup and it worked, and I know that everyone thinks I have something special with my transmission, but basically I was the first guy who showed up there and shifted on the track, because of our particular setup, and now everyone feels like they should be shifting too.

“It’s almost like people misjudge their setups because they are more worried about what I’m doing. They start shifting like me and it almost hurts them. It’s interesting that we came up with a setup that trips up my competition almost more than it helps me.” 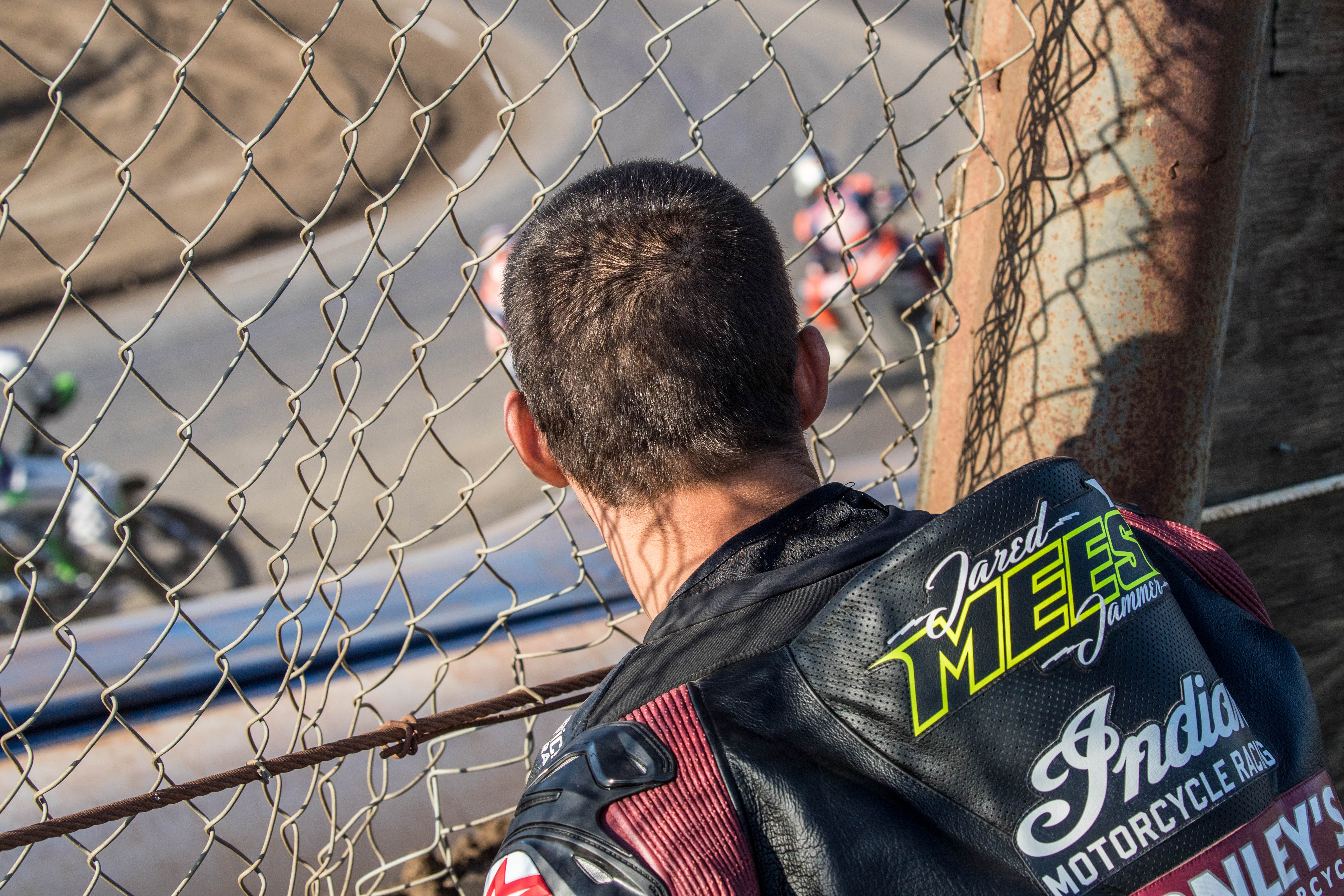 When he's not riding, the Champ can be found closely watching both his competition and the track.

Calculated movements define his methodology and mental focus is the pillar upon which Mees’s program is built, but with a new season comes new rivalries and obstacles to overcome. When asked who he feels is his biggest competitor this season, Mees responded as most would expect:

Now teammates as part of the Factory Indian Motorcycle effort, Bauman and Mees have never been pinned as rivals…until now. Mees, exactly ten years Bauman’s senior, has witnessed his progression as an athlete first-hand, and has even provided training advice and support. 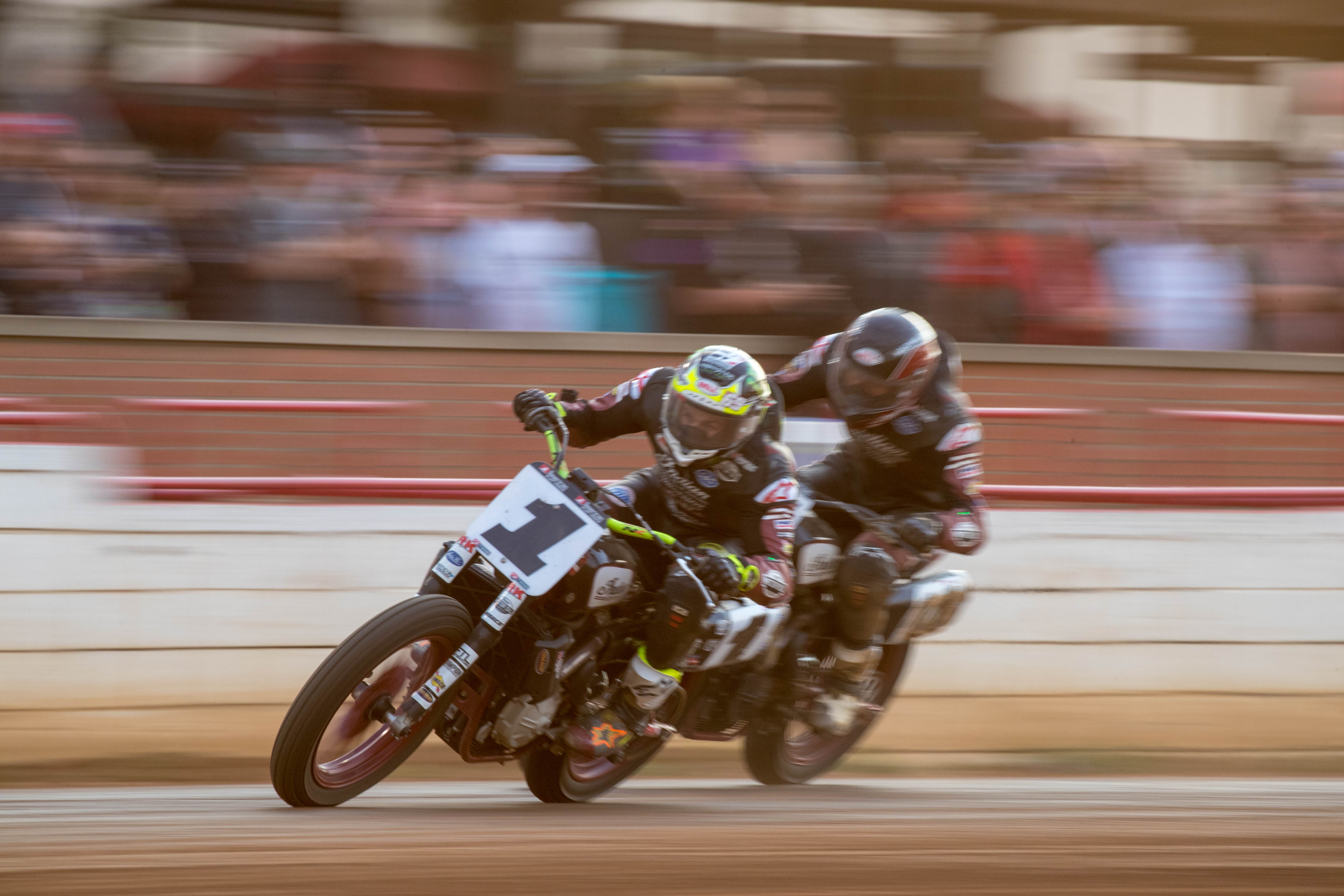 Mees leading Bauman in a tight moment at the Red Mile

“In one way it’s awesome because he’s putting a lot of effort into his program,” said Mees. “And it’s great for Indian and Progressive to have two of their riders running in the front and battling in the points, but it is a different mindset for me.

“When I race Bryan Smith, I’m thinking, ‘There’s no way I’m letting this guy beat me. I’ll do whatever I can to keep him from beating me.”

The dynamic between Mees and Bauman is different, however. He admittedly wavers between emotions: the pride in seeing this younger star come up and the hunger to defeat a worthy adversary.

“With Briar I’m trying to get to that point, I’m almost there, because I don’t want him to take what I’ve got: that #1 plate. But sometimes when he wins it’s like ‘Right on, dude.’ A year ago, two years ago, I was rooting for him, and now I can’t be rooting for him – I’ve got to beat him.”

So one would suppose that we could add Mentor and Rival to the list of monikers with which Jared Mees is associated. But there is one more title – the most important according to Jared – father. 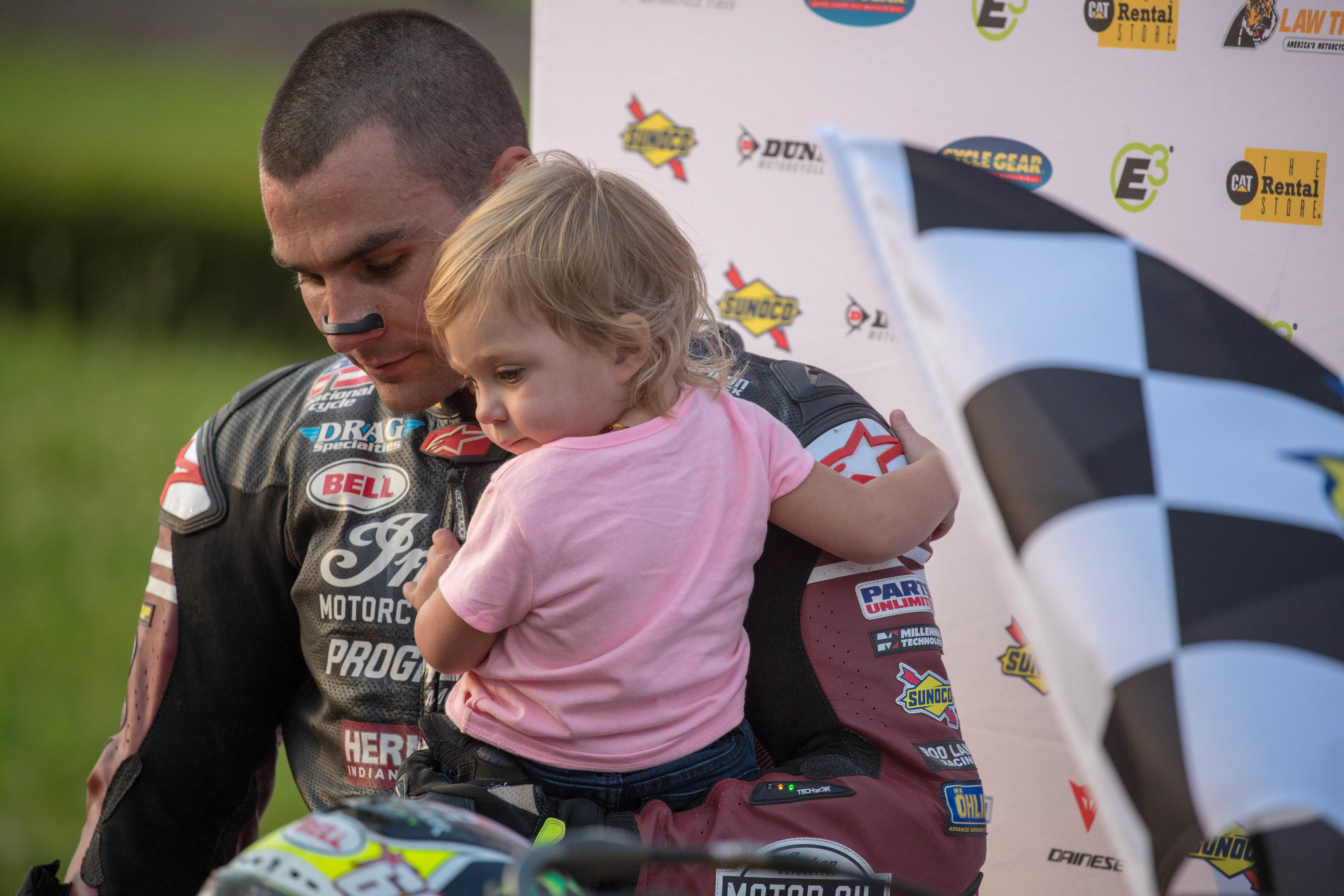 “She’s number one – always. I’ve got to make sure that she’s happy and dialed in before anything else. Having a family, and having a little girl, has definitely made me a better person – less selfish, I’d say.” 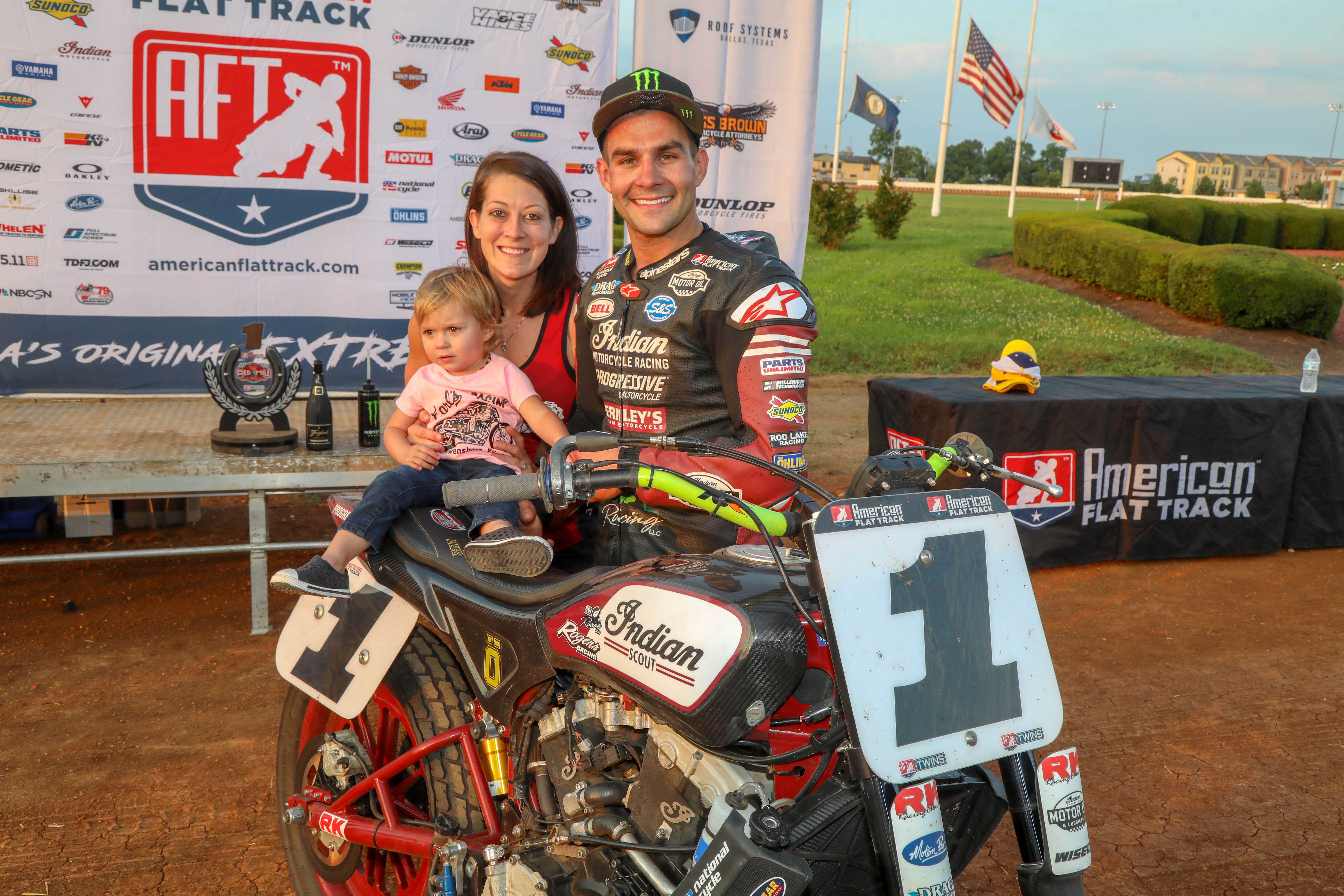 And her name: Hayden. Well, there’s a story behind that too.

“Nichole and I were going back and forth about names and hadn’t agreed on one. Unfortunately, just days before, Nicky Hayden had lost his life in a bicycle accident. We had such respect for him and his family, it just felt good to name her Hayden.

“I texted Roger Lee [Hayden] and he said he and his father thought it would be awesome. And she is definitely a Hayden - wide open, nonstop all the time. The name fits for sure.”

The man who mounts the No. 1 Factory Indian Motorcycle FTR750 goes beyond a pair of leathers and wicked throttle arm – although he admits that his focus in the coming weeks is maintaining the momentum of that Red Mile win.

“Our next race [Laconia] is probably the smallest national we’ve ever run the Twins on. Good starts are going to be important, but I’d say I’m excited for it. I’m looking forward to banging some handlebars and pushing these big Twins around that short track.”

Mees is no stranger to muscling his machine around his competitors and plans to do so again this weekend.

While the pool of championship contenders has widened, Mees plans to take no prisoners as he enters the coming rounds of competition.

This became blindingly apparent when he, in typical fashion, acknowledged our congratulations on his Lexington victory with this simple, yet characteristic assertion of confidence:

“I don’t plan on losing anymore.”