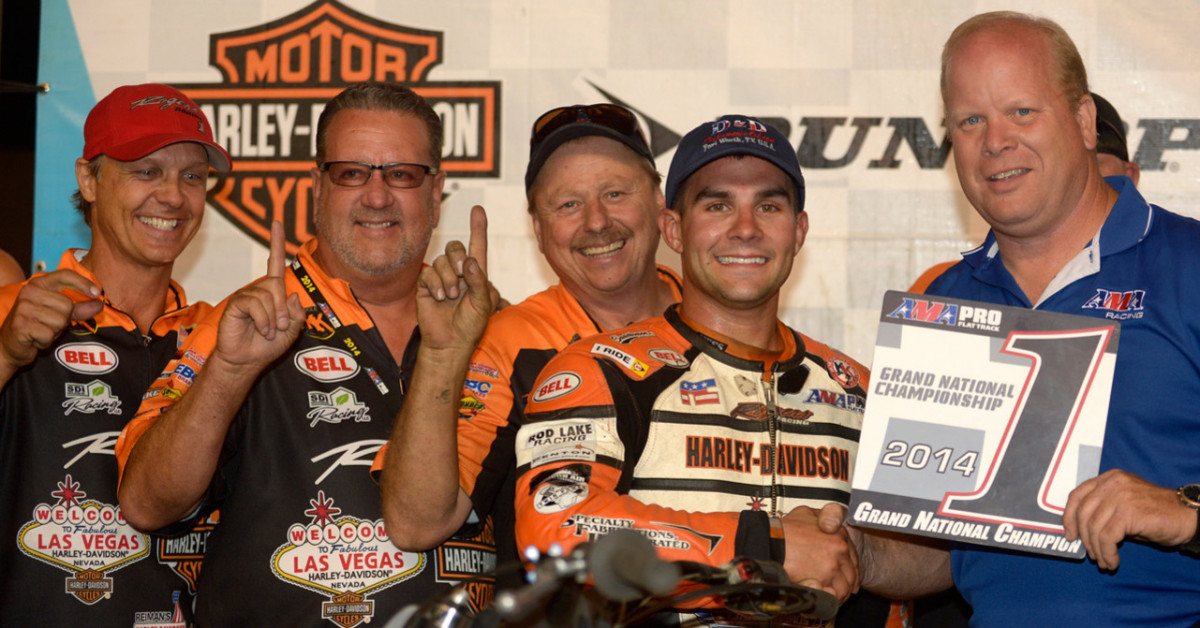 DAYTONA BEACH, Fla. (Oct. 16, 2014) – Jared Mees, Bryan Smith and Jake Johnson all joked with one another on the front stretch while shooting a video before Saturday’s Flat Track Finals.

There was a light, jovial atmosphere between the three close friends and closer competitors. That would change just a few hours later, when the leathers and helmets went on and the trio took to the track for the final time in 2014 to decide the AMA Pro Flat Track Grand National Championship Expert title.

In the end, it was Mees putting the finishing touches on a season in which he finished outside the top five just once and walking away from the LA County Fairplex with the No. 1 plate for the second time in his career.

Smith, on his No. 42 Villa-Esparza/Crosley Radio Kawasaki, won the Dash for Cash and the main event, but wound up three points short of Mees and his No. 9 Rogers Racing Harley-Davidson. Johnson was second on the night riding the No. 5 Ramspur Winery Harley-Davidson and third in the standings, capping a strong season.

“It was a heck of a day, and I knew coming in here, Bryan was going to be one of the toughest guys,” Mees said. “I just rode hard. It’s the best I felt at Pomona, and I wanted to win, I put it all out there. In the main event, I started racing Bryan a little bit, then Brad came in the mix, then I just went, ‘Man, I just want to be alone. I just want to be by myself.’

I just kind of rode pretty conservative and kind of knew where I needed to be. I felt like I rode it smart, really.”

The top three riders in the GNC point standing were separated by just 15 points. Mees’ lead was 13 coming into the night, though.

“I knew coming in here I pretty much had to go out and win,” Smith said. “Whether it was bringing it back on the box or in a box, I knew I had to win it. Luckily the track came to me. … It was all I had. Unfortunately Jared finished two spots higher than I needed for me to get that thing.”

Smith won by 1.457 seconds over Johnson, who was on the podium for the eighth time this season. Johnson finished with 264 points.

The next three in the final standings were just as close with each other at the end. Kenny Coolbeth didn’t race his No. 2 Zanotti Racing Harley-Davidson at Pomona after suffering an injury in the previous race at Calistoga. But the Connecticut resident finished fourth with 208 points.

Defending champion Brad Baker finished his year with a podium finish, taking third on his No. 1 Factory Harley-Davidson. Baker finished in fifth in points, six back of Coolbeth. It was the 10th straight top 10 for Baker.

Henry Wiles rode a Zanotti Racing Harley-Davidson in the finale and put it in fifth. He finished sixth in points with 196. Wiles was one of three riders, along with Mees and Johnson, to score in every Expert main event in 2014. He swept the series’ two TT (Tourist Trophy) events and ended with a run of seven top 10s.

Sammy Halbert used a pair of top 10 finishes at the end of the season, including a sixth at Pomona, to lock in the seventh spot in points on his No. 7 South-East Harley-Davidson, scoring 178 points during the year.

Brandon Robinson was eighth in points, having put his No. 44 machine in the main event in each of the final four races, even though he was 19th at Pomona. With 151 points, Robinson was safely in his spot, 27 behind Halbert and 16 in front of ninth place rider, Stevie Bonsey.

Bonsey crashed out of the event at Calistoga and missed Pomona with an injury suffered there, but still held on to a top 10 spot overall in points, coming in ninth. He was one spot ahead Jake Shoemaker, who rounded out the top 10 with 118 points, 17 behind Bonsey.