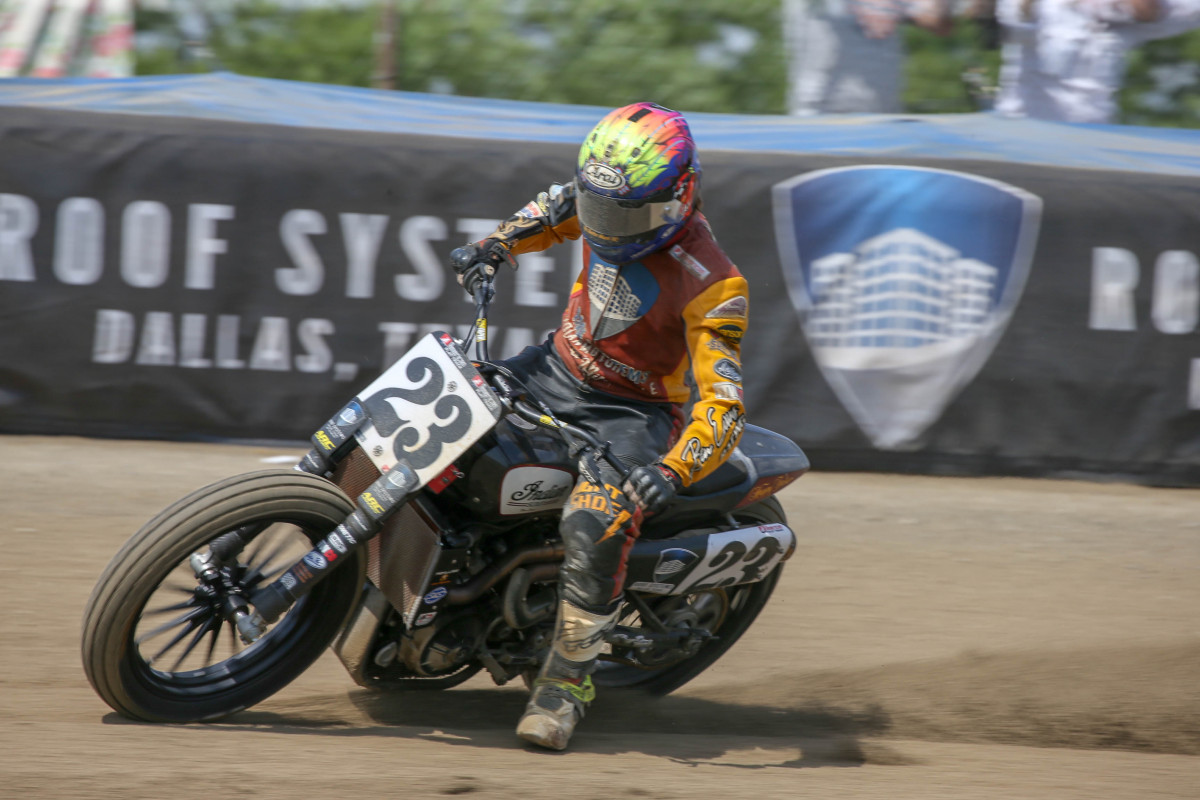 The Illinois native entered this season having built up freight train-like momentum over the previous two years, during which time he firmly established himself as one of the most gifted and hungry riders in the paddock.

2017 saw him elevate his game to an entirely new level after scraping hard just to make his way inside the championship top ten on an annual basis during the opening six years of his AFT Twins presented by Vance & Hines career. That season he earned a fifth-place championship ranking built on a victory, three podiums and seven top-fives. Carver had officially arrived as a week-in, week-out premier-class force.

He followed that up with an even stronger 2018 aboard the No. 23 Roof Systems of Dallas/Indian of Metro Milwaukee FTR750 -- one that saw him end the season ranked fourth overall with another win, seven total podiums and eight top-fives in all. 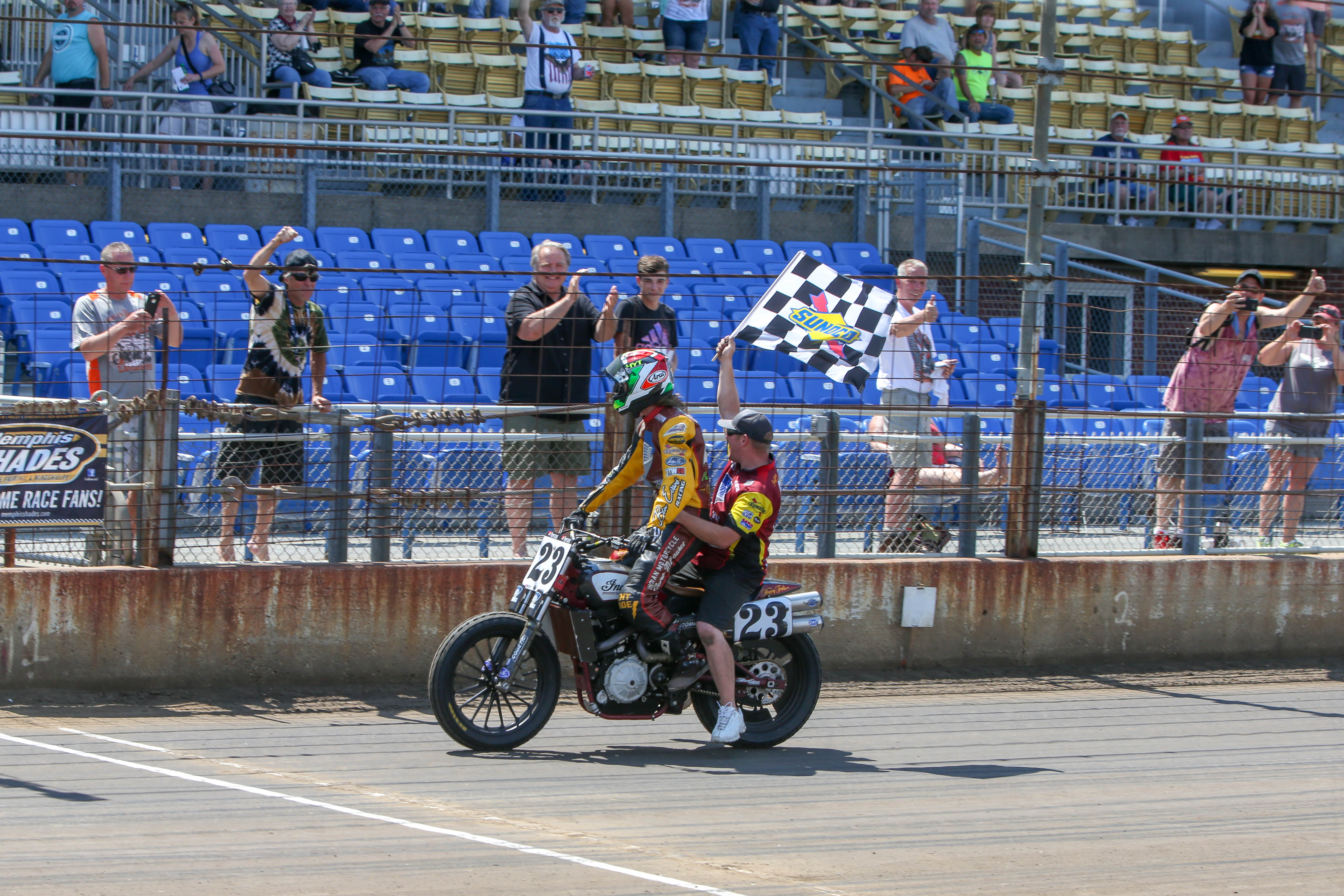 That sort of career trajectory meant a similar leap in 2019 would launch him into Jared Mees-ian territory. In order to make certain his stratospheric rise continued, Carver subjected himself to an intensive offseason training program so that he might fully exploit the opportunity before him.

However, the results that rolled in as the first half of the season ticked away prior to last Saturday’s Indian Motorcycle Lima Half-Mile Presented By Johnny K's Indian -- a 10th, 6th, 12th, 4th, 12th, 10th, and 9th -- were solid, if somewhat short of spectacular.

Then came Lima. An epic showdown that saw Carver and Mees test the limits of physical endurance, mental focus and outright courage was spectacular by anyone’s definition.

That long offseason finally began to show its worth.

“It was definitely one of the most physically and mentally demanding races I've been in -- especially having to go up against Jared,” Carver said. “His work ethic is probably the best of any of rider out there.

“It was just a barn burner. After the first start, I kind of got caught up in like fifth or sixth, and I wasn’t charging as hard as I should of been. I got lucky with the restart. At that point, I knew I was just going to go straight for it. I just put everything on the line and charged as hard as I could. I went straight for the throat.

“The best way I can explain it is, it was a street fight… It was a down and dirty street fight. I charged hard, and I was trying to work on Jared -- trying to wear him out just like it was a boxing match. It was so physical that we were wearing each other out.”

Their divergent lines made for an insanely entertaining duel -- one that at times seemed as if it might end in some ugly combination of carnage and tears. The two routinely streaked past one another, separated by just millimeters, while heading in opposing directions up or down the Lima cushion. 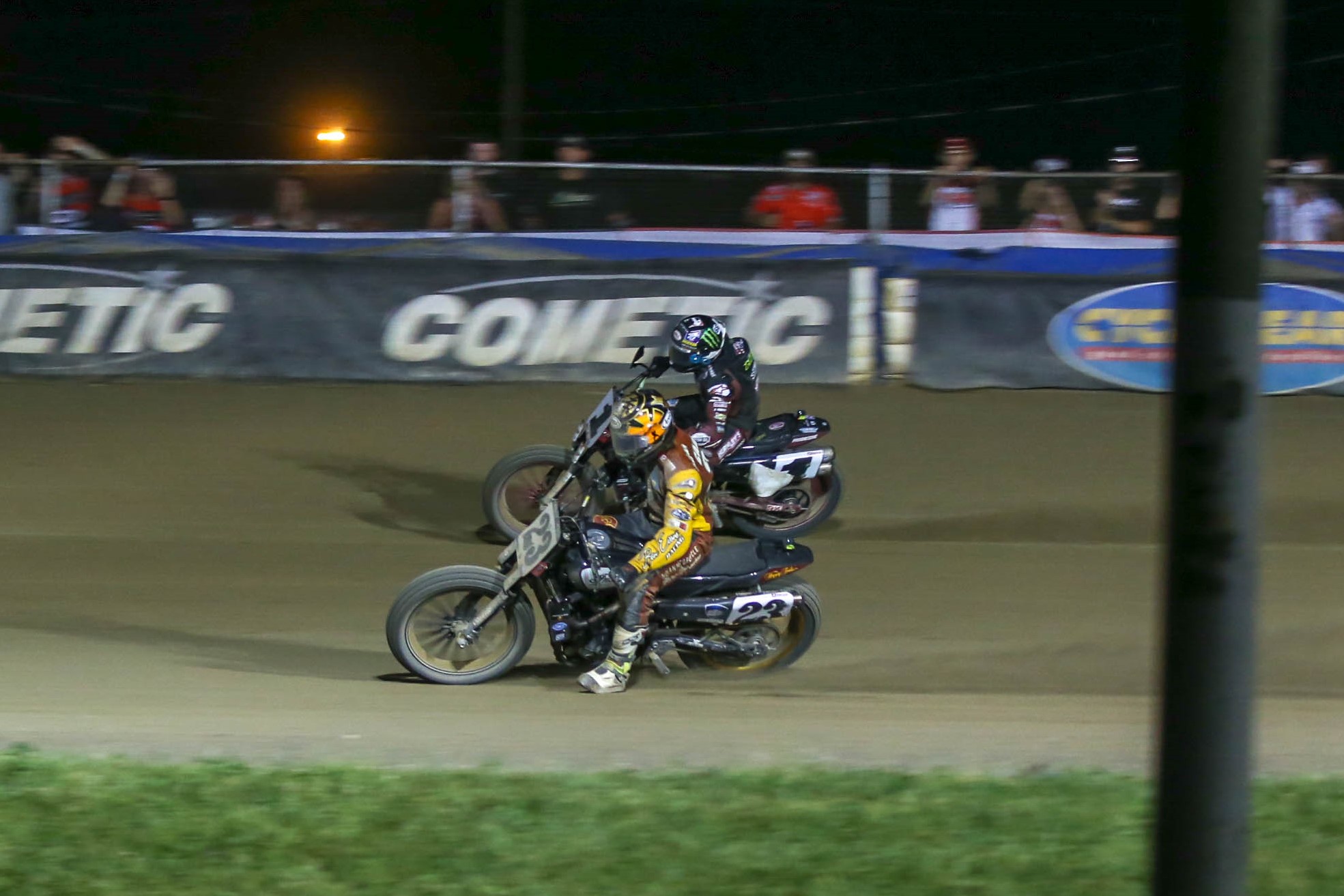 It was quite a literally a game of inches for Carver and Mees, who battled throughout the Lima Half-Mile Main Event

Carver said, “I've always been a rider that would take the second road back when it came to possibly running into somebody and taking them out. I tend to steer away from that. It builds good camaraderie between the riders to be able to have faith that we can race hard but know nobody is going to pull anything dirty. I learned that from Chris Carr; if you're fast enough, you can pass them cleanly.

“But I can also be very aggressive, like I showed this past weekend. When my front wheel is in front of yours, I've got the lead, so I don't see that there's anything wrong with it. If I’m in front of you and I cut your line off -- and you have two options -- lift or hit the fence -- then that's racing, you know? We're not out here putting on a show just to make it look good for the fans. I'm out here to make a paycheck. This is my job, so I go for it.”

After crisscrossing his way from second into the lead and then back into second on virtually every corner of the Main Event for laps on end, Carver was ultimately relegated to simply being the nearest witness to the 43rd victory of defending AFT Twins Champion Mees’ career. 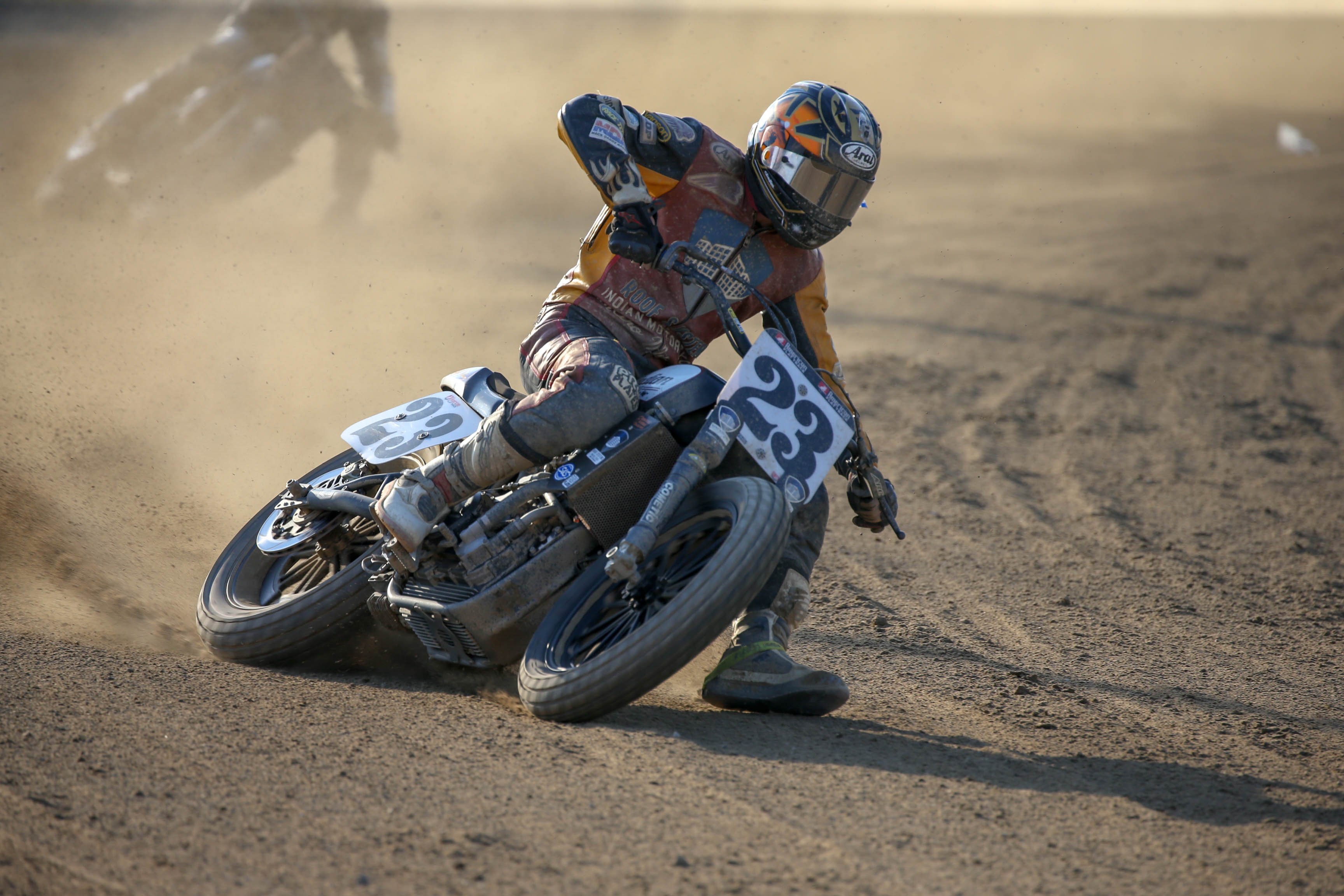 Coming up 0.199 seconds short of beating one of the sport’s all-time greats in the race Mees wants to win more than any other, left Carver with mixed emotions.

“All in all, it sucks working that hard and not winning. But from where we've been this year, to be able to put on a battle against one of the winningest riders in the history of the sport -- to be right there with him and be in contention that close and take the lead that many times -- feels really good. And it made me feel good that afterward he said that he was completely drained and riding on the ragged edge too.” 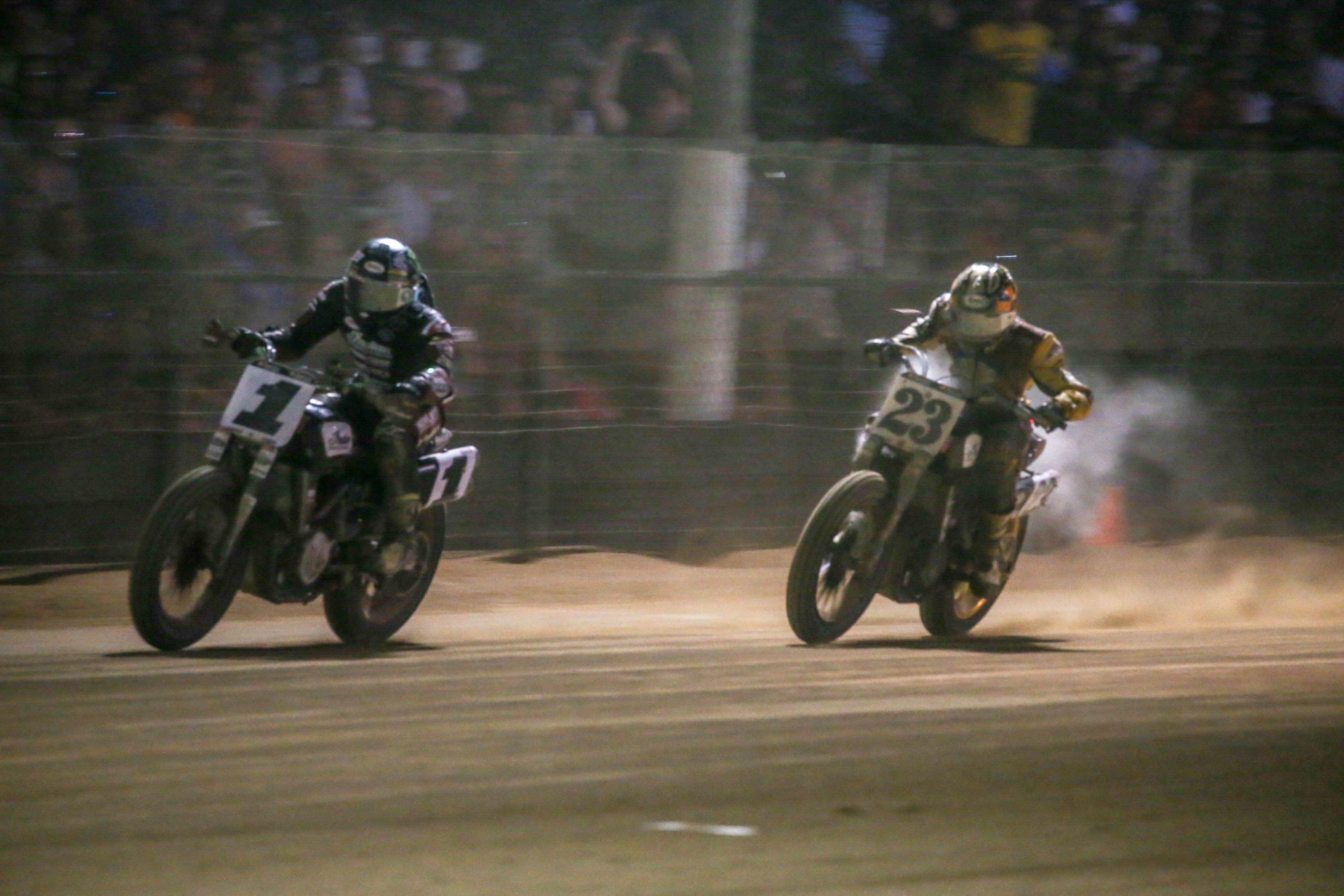 Missing out by such a slim margin hits especially hard for a rider like Carver, who appreciates just how precious each and every opportunity for a victory actually is.

He said, “I've got three wins. Three. I want that to be four… to be five… to be six. The goal is to keep adding to that number. The championship is the end goal, but to me, if you're winning races and taking podiums, the championship will come, so I focus from race-to-race.

“It eats at me that I let that one slip through my fingers. But all it's going to do is make me better for the next time I'm in that situation. Hopefully, I can take the drive, and be the one who makes it happen next time.”

While he didn’t take the win, his performance did serve as stark reminder that Jeffrey Carver Jr. at his best is -- at the very least -- a match for anyone at their best. The key is finding a way tap into the full depth of his immense potential on a more regular basis.

“That's 100% (the key) for me. Whenever I'm on, and I feel it and everything is comfortable, I don't care who you are, I feel like I can beat anybody on any day.

“There's a mental game to this sport at the elite level. The older I get, the more I see it, and the better I understand it. Now I understand I used to be a pawn on this chessboard. Now I'm turning into the King or the Queen or whatever when you're looking at the chess match. You've got to learn the game, and you've got to be in the right mindset to do that.

“Bryan Smith has obviously always been really good at doing that on the Miles. Jared is good about doing it all around. I feel there's a lot of cosmic energy and at a certain time of the day, there's only room for one to win it. I feel Jared took it from me. He was the one that had a little more guts and a little more confidence. That showed me that little bit extra commitment and positive energy I need.

“It's just about getting back into that realm and clicking good with my team. Me and my crew chief, Ben Evans, have been working good together. I've also got my buddy, Brian ‘Slo’ Slominski, in the pits, and another guy, Pat Mooney Jr., whose dad is a world-class roadracer. He's an amazing guy.

“Having those guys allows me to do what I need to do, which is go forward on the racetrack.”

“As far as how this season has gone, it all is what it is. There are a lot of reasons why things are the way they are… I kind of got down about it, but the fire started kicking back underneath me going into Lima. I'd obviously like to be further up in the championship, but I think everyone out there except Briar (Bauman) wants to be higher than they are. Every race is a new day and that's all it is. If I can win races and get on the podium, my championship points will take care of themselves.”

For a rider who is still ascending, Carver has stealthily put himself in position to become something of a historical figure in the sport in short order. While he has -- as he himself pointed out -- just the three career AFT Twins wins to date, those three victories have more than the usual share of impact potential.

With each passing day, it seems more and more likely that Carver’s 2017 Lone Star Half-Mile win will go down as the last-ever for Harley-Davidson’s legendary XR750. And combined with his 2013 Castle Rock TT victory and last year’s Springfield Mile triumph, that leaves him just one Short Track win shy of a Grand Slam.

That monumental achievement could come as early as next time out with the New York Short Track looming large on the calendar.

“Man, you know, I didn't even think about it as being a goal until I started picking off the different race wins and realized all I needed was a Short Track.

“My rookie year in 2011, I led 17 laps of the Springfield Short Track and ended up getting third behind Henry Wiles and Jake Johnson. I've always been quick on Short Track -- it's always been one of my specialties. The big bikes are obviously a little bit different than doing it on the 450s, but I'm starting to come back around to them now.

“That's definitely going to be on my mind, night and day, to get that Grand Slam. The list of riders that have it is very slim. And to be able to be a part of that list -- and the confidence that would bring -- would be huge. It's super cool. It would be amazing to get there.

“It's crazy. The cool thing is, there are a lot of people that believe in me. I know what I can do... It's just about getting in the right mindset and being comfortable and confident with myself. I'm happy to be able to put it back up on the box at Lima, and I'm looking to keep this momentum rolling.” 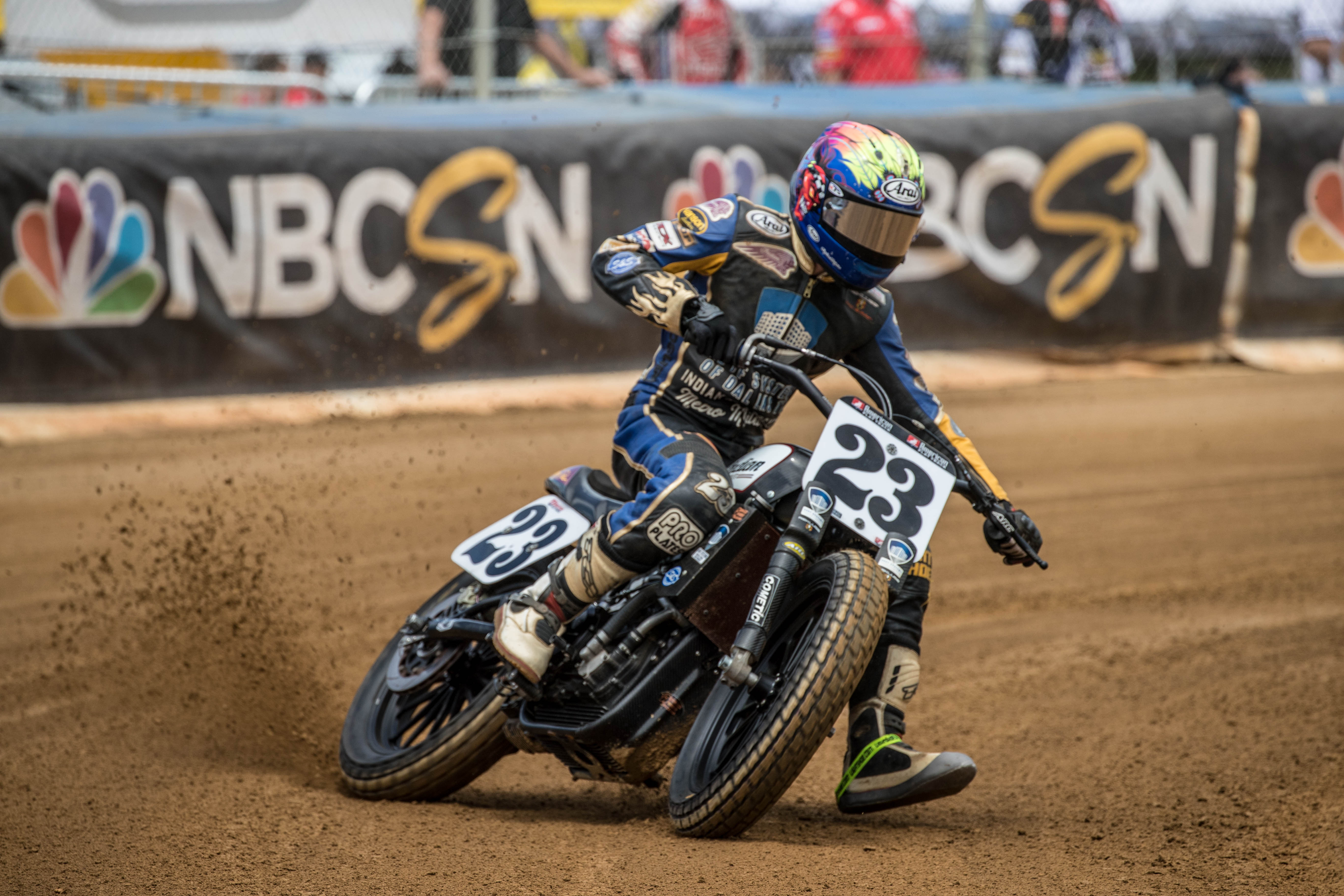