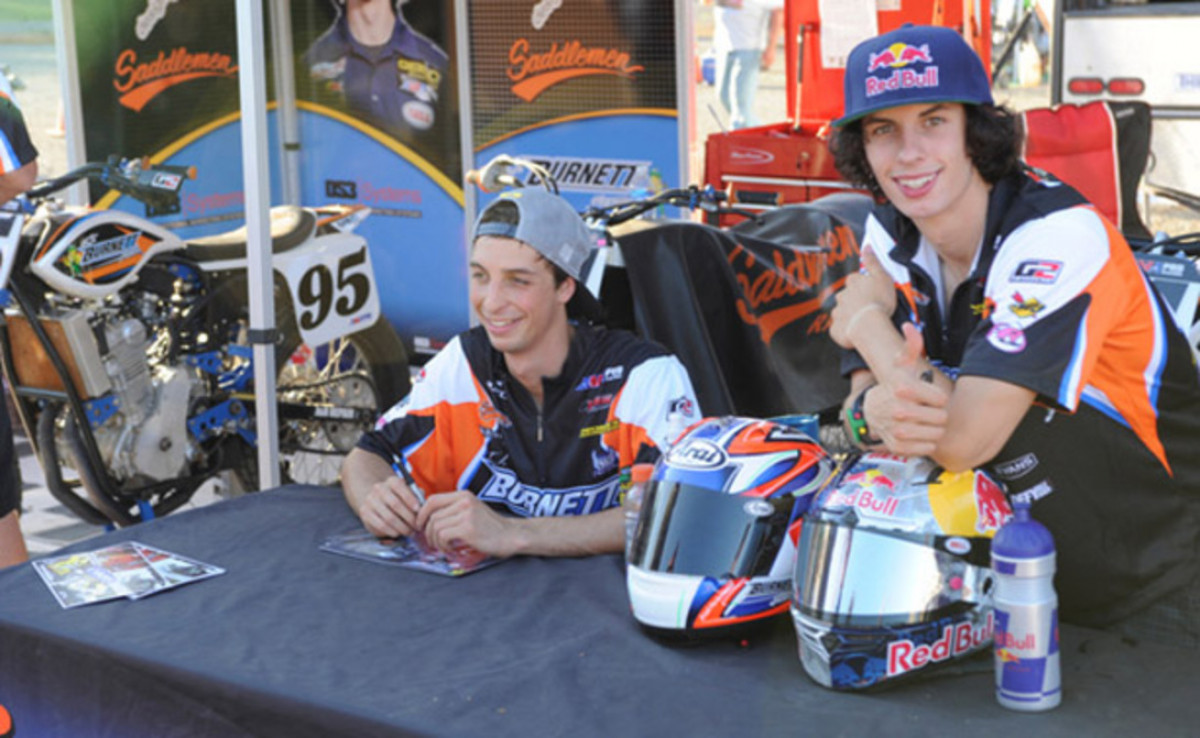 Hi, I’m JD Beach and I have a problem. I’m addicted to motorcycle racing. I’ve always heard the first step is admitting you have the problem. It might not be a problem though, I just love to race and ride motorcycles. As I’ve said for a few years now, Road Racing is my main focus and gets 100% of my time but it’s hard for me to stay off my Dirt Track bike. The last two weekends have been off weekends for the AMA Pro Road Racing series so I couldn’t help but get on the Dirt Track bike. I’ve done one local cushion Half Mile in Paducah, KY and one AMA Pro National in Hagerstown, MD.

We will start off with Paducah. It’s a local race about two hours away that Steve Nace and his crew run once a year during the fair. Most of the time Lima, OH is the same weekend but this year I decided to sit out of Lima. About 7 years ago I raced Paducah on a borrowed bike and this year I raced it on Hayden’s 450. I’ve always struggled on cushions but enjoy riding them so it was nice not having all the top guys there and just going out and enjoying myself. All night long my speed just kept getting a little faster. Come main time I felt like I was rolling well. I rode 3 classes and won 2 of them and had the bike break in one. Every race I won somehow I was actually the only one riding in the deep, rough part of the track. I’ve never been able to do that so it was fun
riding a cushion the way it should be rode.

After a good week of training and riding my moto bike at the house it was time to go to
Hagerstown. Hagerstown is an awesome clay Half Mile that’s been on the AMA Pro tour for as long as I can remember. Last year was really hard for me there but I wanted to go back and give it another go. The Dirt Track team headed up there right after Lima so I flew up on Friday and my teammate Brandon Robinson picked me up and we all hung out at his house and had some fun before heading to Hagerstown the next day.

It was a hot one all day, the weather looked bad the week heading up to it. Every day it rained but Friday and Saturday and it was about 95 degrees and very humid. Setting the pits up was very hot but AMA did a good job keeping water in the track. Once practice got started it was my first time sitting on the Burnett Farm/James Hart 650 since Pomona in October last year. I was really looking forward to getting on the bike and having fun. The first practice I felt slow but good on the bike, just really smooth, I was surprised when I came off and was 5th fastest. We made a few changes then went back out for the first qualifying session, again I just felt really smooth, and was just having fun, and again surprised when I came off I was fastest. It was so fun the bike
was just working well and the track was great. On the back straightaway the track was built up from where the trucks pull in so every time going over it I was pulling up and doing a wheelie before the turn. I think just those little things having fun made me ride better. After all was said and done I was fast qualifier, I was really happy with that.

We sat around doing the fan walk and everything before the heat race and little did we know the track was changing 180 degrees. Once our heat race came up and started going I found out very fast the bike was not setup well at all for how the track was. After the 10 lap heat race we barely made the main by getting 4th (the last transfer spot) with 5th right on my butt. Brandon was in the same heat and finished 3rd having the same problem. We qualified 10th for the main, so decided to make some big changes.

Going out for the main I was feeling good, my first goal of the night was just make the main, and then I wanted to finish better than I started. After a few practice starts I was feeling good. Once the light went green we got a really good start and were among the leaders and felt good. There was a couple close calls the first couple laps and that made the pack get spread out a bit. I was running 5th and was trying to run down 3rd, it was kinda like a slinky, I would get close then drop back, close then drop back. That went on for about half the race before I just started running 5th. The line I was running was starting to go away with 5 laps to go then on the last lap Sammy Halbert was able to get by me and I ended up 6th.

I was very happy with the night. I had a blast riding the twin and Hagerstown was a fun track. Getting 6th isn’t as good as winning but I was able to beat some really fast guys that run every race. There’s some races coming up that I feel like I’ll have a good chance at winning. Also it was cool to see Brad Baker win his first National. Brad and I have raced together since we were on 50s, the last few years we have gone down different paths with racing but it’s cool to see one of my biggest rivals and friend to get his first win.

Next up for me is MidOhio this weekend then right to Laguna. I can’t wait to get back on my Road Race bike and drag some knee. The next two tracks are a lot of fun and should provide some great racing.