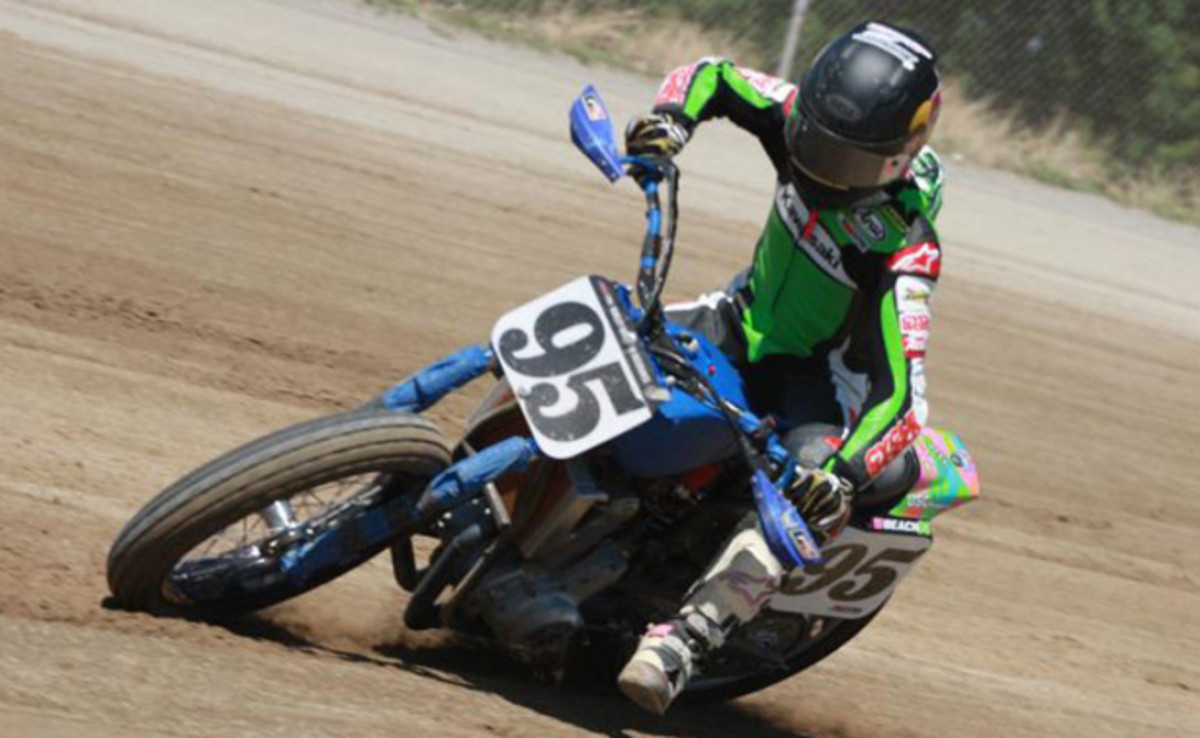 (June 20, 2012) - This past weekend we finished our first of two race weekends at Peoria for the year. We raced the Peoria Short Track Friday night and the famous Peoria TT Sunday. This past weekend was the Steve Nace All Star Series. Steve and his crew always work very hard to give the riders the best possible track and it showed this weekend. Both races I road my USC/Burnett Farms/James Hart CRF450. It was working great and it was nice to have my teammate Briar Bauman there as well.

To start off the weekend Luke Baird and I went up to James’s shop on Wednesday to help him with getting bikes ready. Then on Thursday we loaded up the Kawasaki 650’s and headed to Lima, OH to do a little test and tune before the national. Briar and I got in a lot of laps and really got the bikes working well. I think we found a few new things with the bikes so hopefully come national time we will be ready to go.

Next up was the Short Track race at Peoria. This was the third race Steve has held there but it was the first time for me. Peoria hasn’t had rain for a long time so it didn’t matter how much they watered it, it just wouldn’t hold the water. The bike was working great and we were running some pretty good times. I was really looking forward to going racing. In the heat race I had some fast guys. We got off the line second behind Rob Pearson with Brad Baker and Jeffery Carver behind me. The race was going real smooth until the rear tire got way to hot and we just went backwards. The top 3 made it to the main and we ended up 4th. For the semi we changed tires but we had to put a brand new one on so I knew it was going to take a few laps to come in. I got off the line in 2nd behind Henry Wiles but he got a gap on me before the tire came in. Once it did I was able to pull him in but didn’t have enough laps to make a pass but made it to the main. Come the main the bike was ready to go. The track is banked so it makes it a little difficult for me to start since I’m so short. We got off the line in about 10th but the bike was working real well and the race was 20 laps so I had time to make some passes. I just slowly picked them off one by one and got up to 5th. I was right there with 2nd, 3rd, and 4th but ran out of laps to make a pass, so 5th wasn’t a bad night.

Saturday we had an off day so Kerri and I drove up to Quincy, IL to buy a new Honda CRF100. I traded mine in that I have had for 6 years. I have ridden it so much but it was time for a new one. Riding the 100 is good training but it is also a lot of fun when you have a good group of friends. Saturday night we had a good little storm roll through but it was good for the TT.

The program Sunday was pushed back an hour because of the rain but there was no more coming so we knew we were going to get to race. The TT at Peoria is one of my favorites so I am really happy I get to race it twice this year. After our tire mistakes Friday we had a good idea of what tire we wanted to run Sunday. The bike was working great in practice and I was able to battle and pass anybody I rode with in practice. Come the heat race I got a great hole shot and got into the lead going into the first turn. I didn’t look back from there and was able to put a little gap on second. After a little nap I was ready to go for the main. I was lined up next to Jared Mees and Henry Wiles. They are both really fast so I just wanted to get a good start and race with them. We got a pretty good start but got shuffled back to 5th. We had a near crash off the jump the first lap because we were all so close. Once we got going after that I was feeling pretty good. Once I got pass Brad Baker I had to work on Henry Wiles. He had a bit of a gap on me so I just took it lap by lap, it was 20 laps so I had some time. Jared had checked out already so it was going to be hard to get him. Once I was able to pass Henry I was behind Briar Bauman. He was riding very well too. It took a few laps to get by him. My bike was working so good coming off turn 4 I was able to get them going into turn 1. I lead that group all the way to the end. Jared was way too far to catch him but come national time we should be ready.

This next weekend we have our next AMA Pro Road Race at Barber. From there we will go down to NOLA for the two day AMA Pro Road Race Test. After that I will come straight home Wednesday night. It’s about a 12 hour drive so we should be home Thursday sometime. Get stuff ready and leave for the National at Lima Saturday morning.