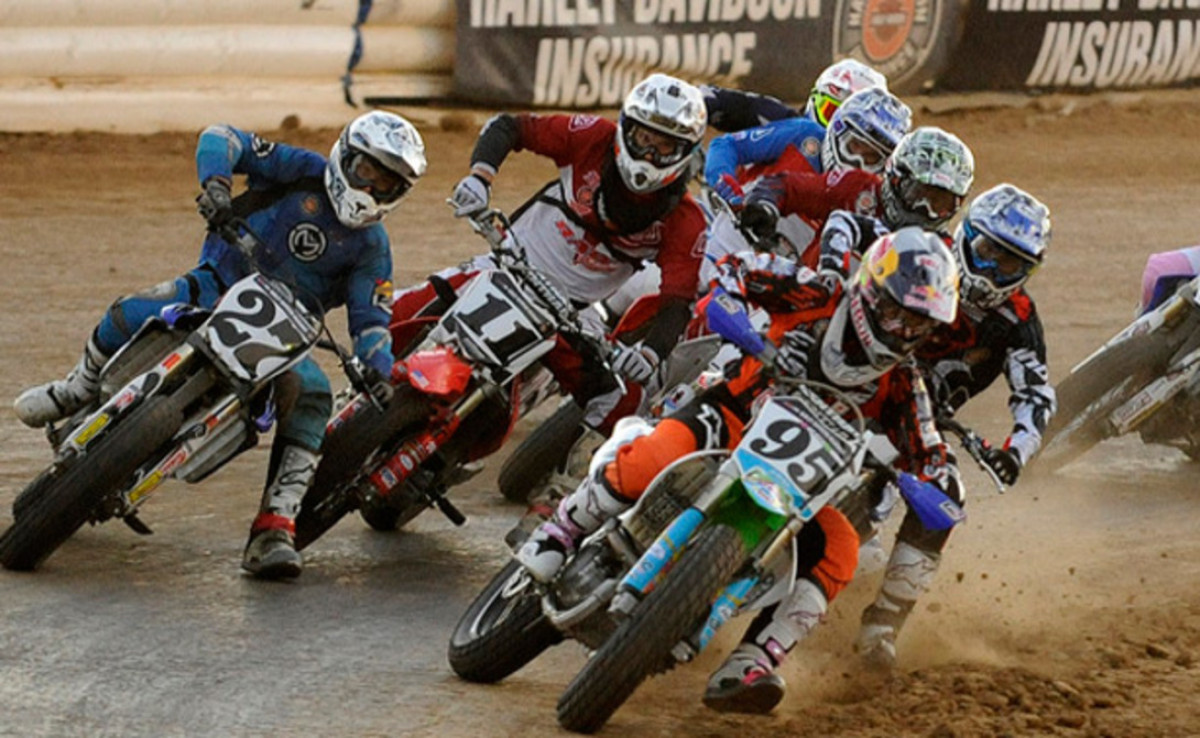 (August 8, 2012) - So another two races in the books and it seems like things might be coming back around this summer. Kerri and I made the trip out to Castle Rock, WA for the TT National they had this past Saturday. I was lucky enough to have my mechanic James Hart and team sponsor TJ Barnette drive my 450 out to the west coast and allowing me to fly out. We flew out on a Thursday because the Mt. St. Helens Motorcycle Club was having a big money paying Short Track Friday night. They were having both a twins and singles class.

Before we get to the racing let me touch on the trip a little. This was the first time Kerri had been to the North West and I lived there for 16 years and never really did any sightseeing. So when we got there Thursday afternoon we went to downtown Seattle and parked and walked around the Pike Place Market and around the streets just to see everything. Then Sunday after the races we went to see Mt. St. Helens which was really neat.

Back to the racing. Friday they had two pro classes, a twins and singles. Both classes were combined, meaning Pros and Experts ran together. I had my 450 there so I was good to go on that but no twin. I had to make a couple phone calls but someone gave me a number for this guy named Gary Beach. They told me he had a twin, a Triumph, kinda old but Gary said it made good power. Come to find out I’ve rode a few bikes he has built because he is my dad so it was fun riding his bike. I think he had a ball
getting to work on the bike all day making changes to the bike like the old days. Both the 450 and 750 worked well all night. On the 750 I was in the dash and got 3rd so I made a little cash. In the 450 class you had to win your heat and Jake Johnson won mine and I got second. So I had to go to a semi and I won that so that put me on the second row for the main. The track was hard to pass on but I knew if I played it smart I could move up over 20 laps. I got a great start and made my way up to about 9th or
so, then I was able to ride my own race and worked my way up to 6th. Next up was the big twins’ race with some heavy hitters, Kopp, Halbert (Sammy and Jethro), B.Baker, Pearson, and more. I really wanted to do good for my dad. I got off the line behind Joe in 4th waited for him to make a mistake and got by him for 3rd. Let me tell you 20 laps on my dad’s really really old vintage Triumph is a long time. There is hardly any seat, the throttle feels like it has car springs in the carburetor, and is down on power a bit. I
was able to hold Joe off and get third behind Sammy and Brad. I think my dad was happier than I was.

The next day, the real racing started on the TT. I was feeling pretty good after my little vacation. I wasn’t really worried about eating healthy or training just kinda relaxed and had fun and I think it really showed in my riding. Before the racing got started, Gene Crouch from AMA Pro Racing and I wired up a GoPro for AMA Pro Live which turned out really good. It took some work to fit all the wires but it was worth it. After qualifying we ended up 12th quickest but knew we had more after some poor bike setup choices. For
the heat race I was sitting middle of the front row with a pretty stacked heat race. It didn’t matter though I was ready and somehow I pulled the hole shot. I think that’s my first one all year. I was leading the pack for about half the race until Jared Mees and Sammy Halbert were able to get by. Both in the same spot but I knew why and how to fix it for the main. We missed the dash by one but we're ready to go for the main. After some big changes to the bike for the main I found myself sitting middle of the
second row like I did the night before when I got 6th. The only difference now was we had a right hander and a lot more money on the line. No big deal though I was just gonna ride my race and make smart moves on a track that didn’t allow for much passing. With not the greatest start I was around 12th or 14th but slowly worked my way up. Making some good passes and letting people make mistakes and move. One of the best passes I did was on Joe Kopp in 1 and 2. I had to go so low and barely get by without much contact at all. By the end of the race I was in 5th. I was pretty excited to get a top 5 after the past few race weekends I have had. We were really close to finishing 4th too, maybe just 2 more laps I could have had it.

Now I’m back home getting stuff ready for Peoria. James and TJ should be back soon from driving to get my bike ready for the National and I’m working on getting my other 450 ready for the Steve Nace All Star Race Friday night at the Peoria Short Track. I will be getting back to my training program, but changing it up some to try and keep my form.