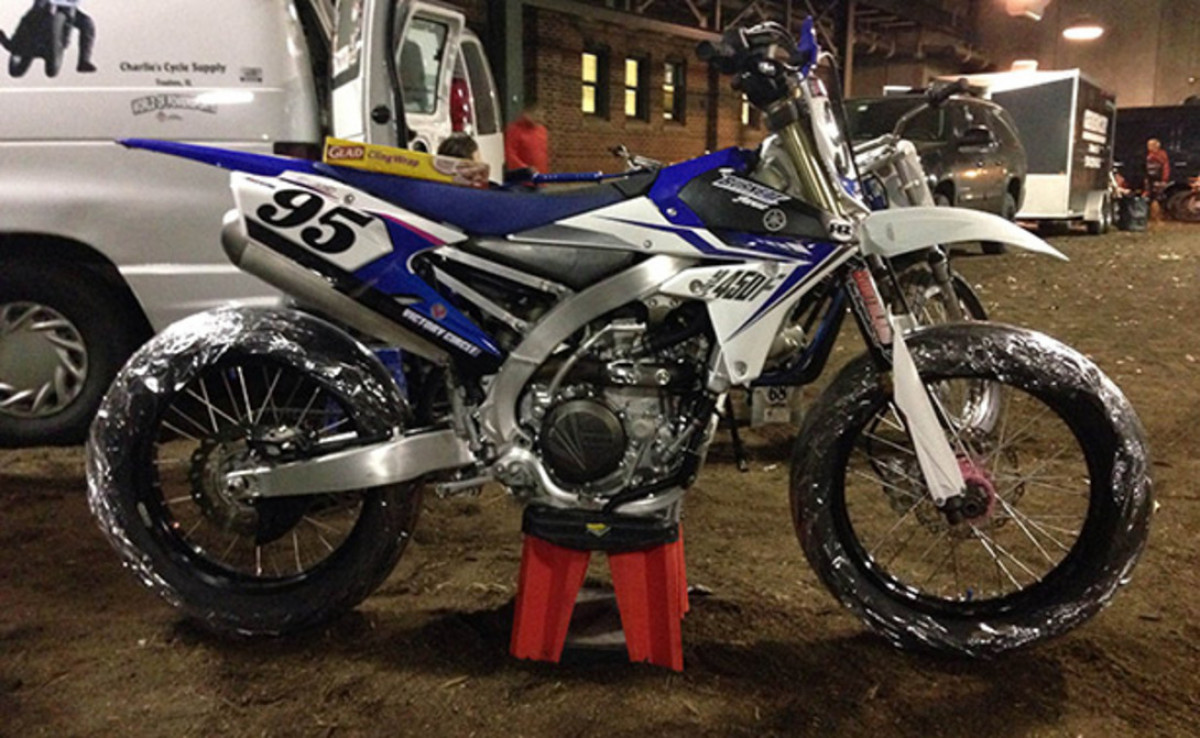 November 20, 2013 - This past weekend I finally got to race at the famous indoor in Springfield, IL. After all the stories I’ve heard I can say the races and track lived up to them. It seems like it had been forever since we last raced at Du Quoin. Maybe it is just because it was a new track but it was still a lot of fun.

Going to Springfield was weird because every time I have been there since about 2003 its been for a National, either as a amateur or pro. Usually when I’m on Interstate 55 getting off on the Sagamon exit my belly starts getting tons of butterflies. This weekend it was different because I knew it wasn’t a national and the first thing I had to do during the weekend was work go karts.

The race weekend started out on Friday for practice. I felt like a kid in a brand new candy shop, like seeing candy I have never seen before. The first thing I did was go look at the track, did the Joe Kopp dirt kicking technique to figure out what was going on. Right off the bat for first practice the bike wasn’t so bad. It was much needed practice for me setting a bike up. James Hart wasn’t there that night, he was only a phone call away but I still had to wing it some and figure things out myself. It’s been fun riding this new Yamaha 450, even though its a 450 you still have to set it up different. When I was on the Honda and had a problem I would make a clicker change and it would be perfect. On the Yamaha I might make some clicker changes and go in the opposite direction and have to do some trial and error before I know what works. Either way by the end of the night I was happy with the bike. After having the night to sleep on things and working the karts in the morning I had a few ideas to try for practice. The weather had changed a little bit and rained on Saturday. So we had the great idea to get plastic wrap for the tires. Going from the pits to the track we had to go out in the weather and get the tires all wet plus getting more dirt on them. The plastic wrap would keep the tires dry until I got onto the track.

Once the heats started James and I were still scratching our heads on bike setup. It was working good but not great. After the first heat race and thinking about the track we decided to change tires. Every indoor we run we use Maxxis tires but the way the dirt was and how wet is was we decided to throw a Dunlop on it. That next heat race
was like riding on pavement, the rear hooked up so well, I could hear the motor almost wanting to die it was hooking up and lugging so much. We had some good heat races and was feeling good about the bike. After the Short Track heat races we had our one TT heat race. The way the TT was laid out was a lot of fun but real tight because the building is so small. On the first lap I made a small mistake going up to the jump and rode a wheelie until I got the front over the jump and sat it back down. I have no idea why I didn’t think of this sooner but that way was so much faster, getting the front tire up and over it but keeping the rear tire on the ground driving was a lot
faster.

Next up was the Short Track mains. It was some of the most fun I have had in awhile on a Short Track. Rob Pearson and I had a great battle in the first main. We race every winter together, all the time, we can race each other hard but trust each other. In the first main Rob got the hole shot but I was right there with him. I was trying high and low, trying to square him off, but couldn't get anything to work. So I decided to try and go high and go around the outside of him. I was starting to make it work and was almost by him until he decided to run me high, which was fair play. After that Rob got a gap on me so I had to run him back down, once I did I had 2 laps left and wanted to give him a love tap for putting me wide. I was running him down and once I did, I squared the turn off real well and going into turn 1 gave him a good love tap and moved him out of the way and won the main. With the being said I ended up 2nd. Kevin Snyder the ref came over to talk to me after the race, I guess when I squared the
turn up I cut one of the corner markers. No one really cared but he wanted to keep it fair and I understand so I got docked to 2nd.

In the rest of the mains it was close racing but I was able to get the wins. I got the hole shot every time on Rob but he was right there. It made me really have to work hard and get every lap perfect. Something I haven't been able to do yet on the Yamaha. We did get the job done and made me feel that much better about the bike. To end the night the only way is to race the TT. TT is my favorite part about the indoors. I like to jump but I’m no where as good as a motocrosser and I like to get practice going right for road racing. The way the track layout was and the way I was hitting the jump it was very important to make my lines perfect every lap. I was able to come away with the win.

With a couple weeks until the next race at Du Quoin there isn’t much to do. I have my gear and boots cleaned, washed my bike, changed the oil. I guess I’ll just do my training and twiddle my thumbs until the next time I can
ride my motorcycle.