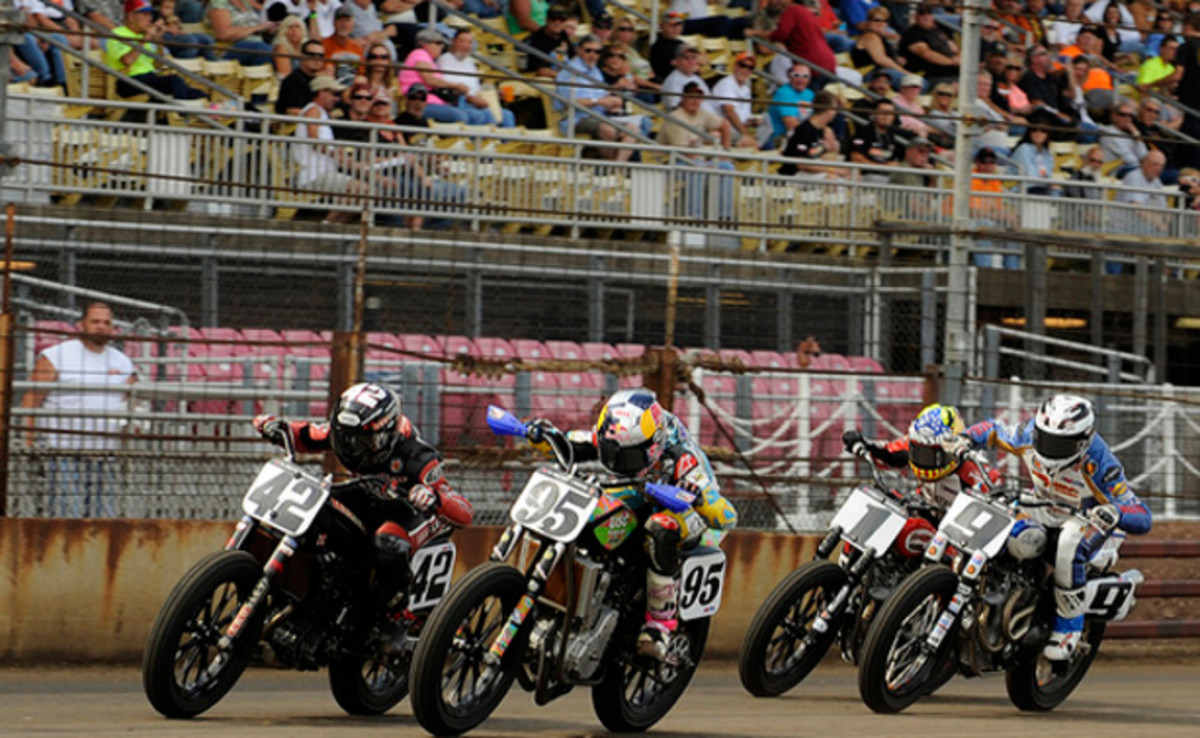 After two weeks of waiting we finally got to race at Springfield for the Short Track and Mile. The weather was perfect and it wasn’t a typical Springfield weekend, it wasn’t hot at all. It was so nice out. It was kind of a laid back weekend feeling. I guess it’s because of the passing of AMA workers Dave and Tyler and maybe just because the weather was so nice.

The trip started off on Friday going up to Springfield to watch the amateur races on the Short Track to see how the track was and see how it would change during the night. When I got up there I was talking to Steve Nace and he was a little short handed so I offered to help him. During practice I was a flagger and during the heats and semis I was a scorer. I didn’t mind doing either of them but I kept finding myself watching the riders instead of doing my job but I was able to manage.

The Short Track on Saturday was my day to get up early and get in line and the Mile on Sunday was James’ day to get up early. On Saturday we didn’t pull into the track until 12 but I was in line right at 8 so I would be able to get a good pit spot. It’s always a good time sitting in line talking to everyone before getting in. Once we got in it was the normal thing, getting everything unloaded and set up, getting the bikes through tech, and everything else that needed to be done. We had plenty of time to do everything and by the time practice came around we were ready to go. For practice the groups are done by points and after having two bad races in Daytona and missing a race I was 8th in points. It was fun to get to go out with the first group and be out there with the top guys. After chasing set up a little bit we qualified 7th which wasn’t bad at all for us and put us in a good spot for the heat race.

In the heat we got off to a great start, pulling the hole shot in front of Jake Johnson and leading a little more than half the race. Towards the end of the 10 lap race I was starting to lose rear tire grip but was able to hang on to second and get into the dash. After chasing setup all afternoon for practice the heat was completely different and for the dash we basically went back to the set-up we started with before practice. Once we changed the bike totally we were out in the Dash. After not a great start we ended up 6th but was right there, it was only 4 laps so you don’t have much time to do anything but we did know the bike was working great and we were ready for the 25 lap main.
For the main I decided to start on the outside and try to run the cushion around for the first few laps to try and gain a few spots. I guess Henry Wiles decided to do the same thing, I was right behind him and I was getting roosted so much my bike was slowing down and it was killing my chest but after about 3 laps we all got in line. Most of the time Henry just checks out but it was a very close race this year with Brad Baker almost leading all the laps. The top 7 of us where all right there, at the end I finished 6th but the bike kept getting better and better during the race. We were happy with the finish and looking forward to the Mile.

On Sunday I don’t know if it could have been a better day. I guess the only thing that could have been better was winning. Practice the bike was running great and working really well. We made a few little changes here and there but it just kept getting better and better. Going into the heat race I was feeling good about the race and wanted to get into the dash. Off the line I think I got the worse start ever, the bike has a fine limit of where to rev it, to much and it spins like crazy, but to little and the bike almost dies. Well I was on the to little side and I was thankful the bike kept running. After that start I was about 6th but I was just trying to pick one rider off at a time. I was able to make my way up to Jared Mees who was leading and get by him. I was able to hold him off and pull him with me into the dash.

Come to find out I had the fastest heat so I started pole in the dash and for the Springfield Mile Main Event. That in its self is huge, it was really cool. I lead the first two laps of the dash but was shuffled back to 5th by the end of it. Even though we have a fast bike the draft game is still very tricky and I am still learning that.

Before the main I was so nervous. I was starting on Pole for the SPRINGFIELD MILE I just couldn’t believe it. Kerri goes to a lot of the races with me and she could tell I was very nervous. She was able to calm the nerves a little bit, by telling me that not very many people ever get to start on pole in the Expert class in Springfield and also get to race for 25 laps with the top guys. She said just go out and enjoy myself and that really helped. While we were waiting for the main the Pro Singles class was out there and had a scary crash that involved a couple of friends they are all recovering fine from it now but at first it was crazy.

Sitting on the line I just wanted to race and enjoy myself and learn what I could. After getting a really good start I was off and racing with the top guys in the sport of AMA Dirt Track and I was going to be there for all 25 laps. I was running between 4th and 7th the whole race. Getting to see first-hand the chest game of the Springfield Mile. I was playing it a little safe not wanting to do anything crazy. On the last lap going into turn 1 I was able to get by Willie McCoy and then draft past Jake Johnson to get into 4th. Right then I knew I might be able to get onto the podium but coming off turn 4th I spun up a little and was 4th.

After the race I was just thankful for the great weekend of racing and possibly the last Springfield Short Track. I learned a lot about the Mile and how everything works out there. Now I’m getting stuff ready to head down to Miami for the next to last Road Race.