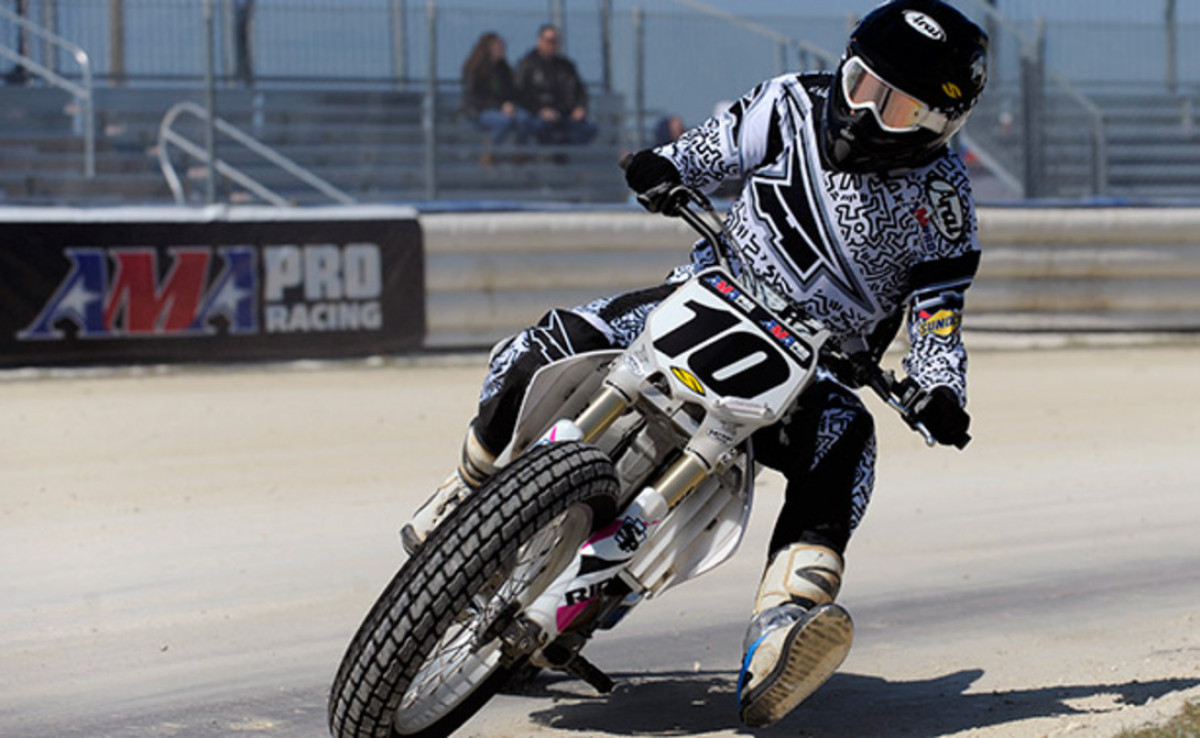 OCALA, Fla. (Feb. 20, 2015) - After missing the opening round of the 2014 season in Daytona Beach, Fla., with the birth of his first child, 2012 AMA Pro Flat Track Daytona Short Track Round 1 winner Johnny Lewis will return to the track that was the beginning of many accomplishments in his professional flat track career. Lewis, who is currently just 25 years of age, not only earned his first National win at Daytona Short Track but it was the also the track that he qualified for his very first main event, won both his first heat race and Dash for Cash and earned his first career podium.

"This place is special to me, it gets my heart racing just talking about it. I know what it feels like to win here, it's a track that changes lap by lap which makes it nearly impossible to really be prepared for it 100% and I think that's what gets me excited about. It's not about racing others, it's all about racing the track." stated Lewis.

Lewis made a big change this off season, his family (wife Alysha and baby son Maxsen) packed up their RV and headed south. "After our trip to Supermoto Of Nations in Cremona Italy in October, we put a plan together and decided to just go to the warm weather. Aside from having the ability to ride more than I ever could in an off-season in years prior, we really just wanted to enjoy more time together as a family and I wanted to be able to watch Maxsen grow up and learn new things." All of January Lewis rode his Solid Performance KTM USA 450 SXF on motocross tracks all across Florida. He then made the switch to strictly flat track testing and training earlier this month. "I was getting in great motos, building up my physical and mental training at tracks like WW Ranch in Jacksonville, Waldo MX, Hard Rock MX, Tampa MX, Sunshine MX but knew I had to make the switch to "flat track only" to switch out of the moto mindset and back into the flat track mindset."

Returning to Daytona this year, Lewis has put together his own AMA Pro Flat Track GNC1 450 program under 10 Entertainment with main support from Solid Performance KTM, KTM USA & Wallace Trucking. Solid Performance KTM (Downingtown, PA) has built and sent down a set of lowered FT spec suspension to Lewis, along with a pair of 19 inch flat track wheels provided by Wallace Trucking, for Lewis' KTM 450 SXF to begin testing. "I can't say enough about Solid Performance KTM and it's owner Evan Yarnall. I called him on a Monday and said hey I'm ready to switch this bike over to a flat tracker can you lower my suspension and finish my wheels, by Friday I had the stuff in Florida, bolted it on, and was testing Sunday morning" Lewis said. With the support provided from KTM USA, Wallace Trucking, and Solid Performance KTM, Lewis has had the necessary parts needed to develop the KTM 450 SXF for this season's opener and feels this program will be solid enough to return him to the GNC1 podium at Daytona for the 4th time in his career. "I decided to ride the KTM 450 SXF February 1st. There were a couple options on the table for a possible 450 program, but at the end of the day I knew the Solid Performance/KTM program would be a better fit for me in 2015 with some additional goals I want to accomplish this year. I then reached out to some new and past sponsors, told them the plan, and here we are only 20 plus days away from the opening round more prepared than I have ever been. I'm excited for Daytona," Lewis said.

"The support from friends & sponsors has been amazing this winter." Lewis said, "I've been getting calls, texts, & emails all winter motivating me both on and off the track, and it makes a difference when you have a support program like this. These people have been so good to me and I really can't thank them enough. I also can't thank my wife Alysha enough for being my biggest supporter and motivating me, along with our son Maxsen who turns 1 March 7th and keeps me on my toes!"

Come by the 10 Entertainment pit March 12th & 13th to greet Johnny. Look for the Solid Performance canopy and the #10 KTM USA 450 SXF in the pit. 10 Entertainment will be kicking off its first give-a-way raffle sign up March 12th thanks to American Kargo & Kicker Audio. Mini #10 number plates by Pro Plates will be for sale along with #10 t-shirts and more. Can't make the race? Follow it live at www.FansChoice.tv - Opening ceremonies kick off at 7:30pm. Watch for the KTM USA supported rider in KTM's Gravity FX orange & yellow line of gear.