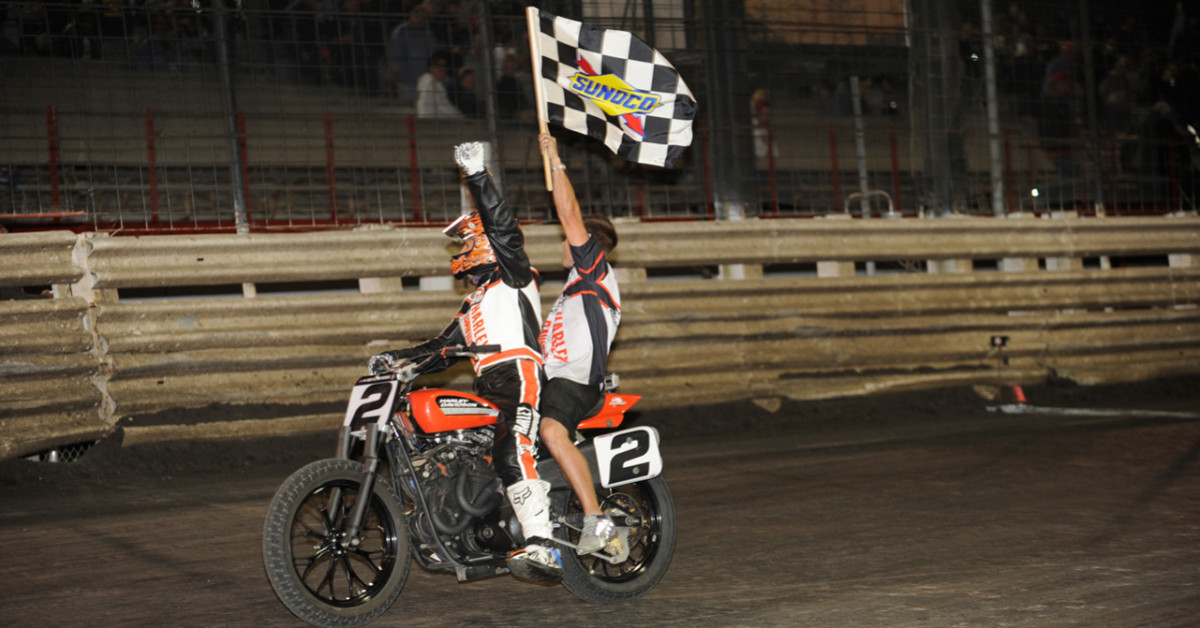 Knoxville Half-Mile Race Recap: Coolbeth Returns to Top of the Podium in Second Race Back After Injuries

DAYTONA BEACH, Fla. (September 12, 2012) - "When I come to a race, I come to win," said Kenny Coolbeth and that mantra worked to perfection when the AMA Pro Harley-Davidson Insurance Grand National Championship presented by Motorcycle-Superstore.com and Lucas Oil came to the Sprint Car Capitol of the World, the spacious Knoxville Raceway and it's bullet fast half-mile oval.

It took Screamin' Eagle Harley-Davidson Motor Company-backed Coolbeth five laps to gain the lead in the 25-lap National, and once he did, he never looked back.

"My bike was coming off the corners and going down the straightaway unbelievably fast," said Coolbeth. "That's where the passing was. It was kind of a one-line in the corners."

Johnson made a critical error going into turn three on the first lap. "I think I just got too excited too quick. I don't think it was ready to push it that hard yet," said Johnson. "Three times in a row I just ran it into three. There is a little dip in the track and if you ran it in too hot and too sideways it would kind of unload you. It just ran me off the groove. I was just dumb enough to do it two or three times in a row. Before I knew it I was like back in sixth or seventh. Luckily we had the red flag and reverted back a lap and was able to start fourth."

Matt Weidman (Scott's Powersports) had fallen in turn three, bringing on the red lights. Weidman was able to regroup and make the restart.

Mees picked up where he left off, but now it was Coolbeth applying the pressure. "I was in third on the first start, Jake and Jared were ahead of me," said Coolbeth. "I got around Jake and then we had a red flag. I got a good start on the second start and I just followed Jared into turn one."

Coolbeth was quick to make his move and dove under Mees exiting turn two taking the lead. Coolbeth steadily pulled away with Mees being harassed by Brad Baker (Dodge Brothers Racing) and the reprieved Johnson.
Consistent laps allowed Coolbeth to pull away as Mees was now encountering problems.

"Just past halfway she just basically let go right after turn two," said Mees of his XR750 Harley-Davidson. "It made a bunch of noise. A couple laps before that Jake got by me pretty easy going down the front straightaway and I thought, 'Maybe this thing is tying up.' I just wondered why I couldn't go down the straightaway any more."

Baker's race soon began to unravel too. "This could of possibly been my first expert win and definitely another podium finish," said Baker. "It was thrown out the window when my bike started cutting in and out on about lap 6. It eventually got so bad that I was forced to pull off."

Mees was unable to complete lap 16 and the points leader was relegated to spectator. "It is what it is," said Mees. "It shook up the points quite a bit more than I would of liked for sure. We're still in the lead, it will be alright." Two laps later Baker was also sidelined.

"On the restart, I came off fourth and just kind of kept my cool," said Johnson. "I just cruised for a couple laps and waited for the tire to come. It seemed like everything started clicking. I was able to get by Brad, it looked like he was having some problems. It was tough to pass. The lap before I got by him, I saw him go down the back straightaway and it seemed like something was going on with his bike. He threw his hand up and then put it back down again and took off again. I knew something was up. I was able to get by him and I started running Jared down."

"I got up to him (Mees) and we kind of ran even for a few laps," said Johnson. "I couldn't really get by him. I noticed that each lap his bike was getting a little bit slower. I was able to get a little further up on him on each straightaway. I was finally able to get by and by that time, Kenny was gone. I just gave it everything I had."

Coolbeth has been working his way back into action after breaking his leg in June. "It feels good. It's only my second race back and I'm right up there with those guys," said Coolbeth. "The team is finally meshing. We've done some different things with the team and it's paying off."

As the laps wound down, Coolbeth's torrid pace slowed a bit. "I definitely backed off. I was riding my brakes quite a bit and they were fading," said Coolbeth. "Then the throttle started kind of sticking. I was flustered there for a while and I kind of backed it off."

"I looked back once and thought I had a pretty good lead. With five laps to go I looked again and thought, man, he's catching me," added Coolbeth. "I thought I better step it up. I got into the lapped riders. I was hoping that they didn't hold me up. They did a good job getting out of the way. It was great."

"I was able to close the gap quite a bit. I just fell short on laps I guess," said Johnson. "It was a good night in points for us. It's unfortunate for Jared to not be able to finish. That's how this year has been going."

The other title contender, Sammy Halbert (South East Harley-Davidson), inherited third, but was well behind the two leaders. "On the restart I almost passed Jake and Brad. I passed Jake and stuck it in there under Brad," said Halbert. "He raced me into the turn and kind of pinched me off a little bit. There was a close moment there and I dropped back to fifth. It looked like it was going to be another fifth for me. There was a little attrition so it brought us up to third. I'm not thrilled with the race as far as how I did. I just couldn't quite get it dialed in. It was a pretty consistent night for me."

Eaken Racing's Rob Pearson is quickly adapting to his new Kawasaki ride as he came from row three to finish fourth. "The restart helped me out a bunch. I got to the bottom and got a couple guys," said Pearson. "The Kawi started hooking up. It's got legs down the straightaway, it made it a lot easier to pass people. I've got to go home and figure out these starts. I need to put myself in a good position in qualifying. If I can put it all together, I feel better than I've ever felt." Pearson clenched the weekend's MotoBatt "Hard Charger" Award for advancing 10 positions in the main event.

Moroney's Harley-Davidson / Fasthog.com's Bryan Smith finished fifth some 13 seconds behind the winner. R&J Racing's Doug Lawrence was just behind in sixth. "For as bad as I felt, I guess fifth is something I'll take," said Smith. "I would have much rather been racing for a podium. It is what it is I guess."

With this tight of a points race, the Dash's points become all that more important. The last few years, Sammy Halbert has had a lot of success in the dash races, but a third place heat finish left him out of the race. Mees, Johnson and Coolbeth gave a quick four lap preview of the National and Mees eked out the win by .051 second over both Johnson and Coolbeth.

Second and the all important four points were awarded to Johnson.
Despite his mechanical problems, Jared Mees has retained his points lead, now whittled down to eleven over both Sammy Halbert and Jake Johnson, 207 to 196. At this point Halbert holds the tie breaker with three wins to Mees' one and Johnson has yet to gain a 2012 win. Bryan Smith sits in fourth 60 points behind Halbert and Johnson, which pretty much makes it a three rider race for the Grand National Championship.