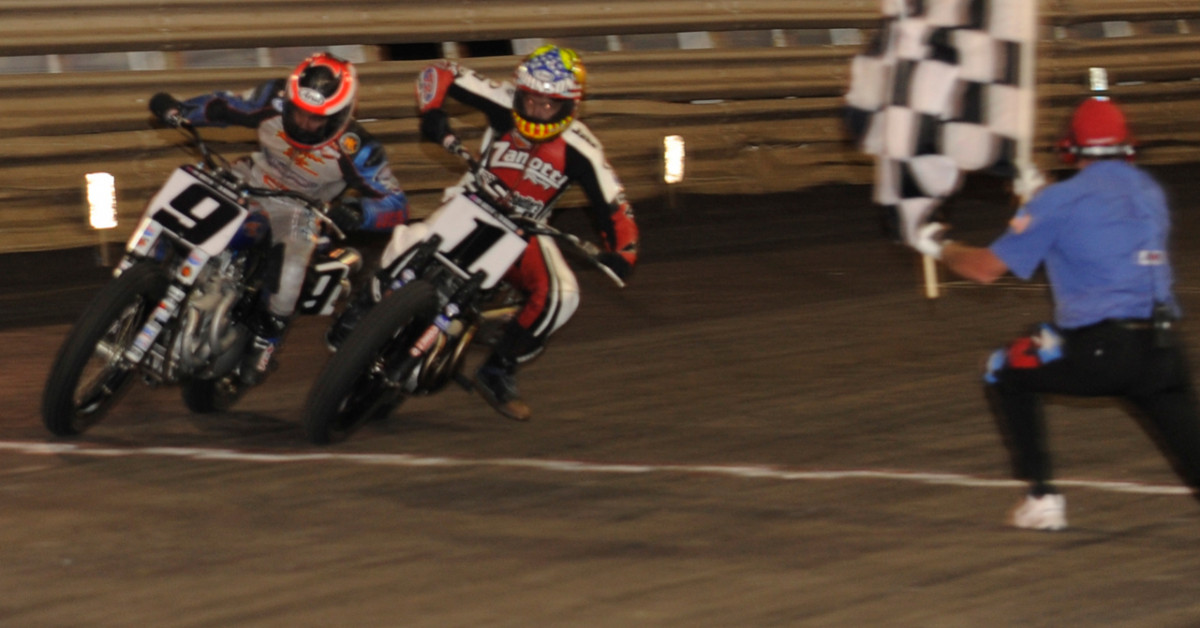 KNOXVILLE, Iowa (September 8, 2012) - AMA Pro Flat Track is bringing the "Greatest Show on Dirt" back to Knoxville Raceway this weekend for a one-day event on Saturday, September 8. Last year marked the return of the AMA Pro Flat Track motorcycle racing to the Sprint Car Capital of the World following a 15 year absence and the show was nothing short of a thriller; a large crowd witnessed Jake Johnson and Jared Mees battle it out down to the last inch of the 25 lap main event with Mees winning by an eyelash. With the 2012 rider championships and number one plates on the line for the AMA Pro Harley-Davidson Insurance Grand National Championship presented by Motorcycle-Superstore.com and Lucas Oil (GNC), this weekend promises to deliver the same jaw-dropping exhibition of two-wheeled speed and handlebar-banging action.

Once again this year, Mees and Johnson are at the top of the Series' leader board. Recently, South East Harley-Davidson's Sammy Halbert has also inserted himself into the 2012 points race and his third-place finish at Knoxville last year shows his potential to shake things up.

While the top three in points have their own race going on, there is a strong contingent of riders looking to make their mark on 2012. Three-time GNC champion Kenny Coolbeth, the only rider to participate in all of the Knoxville Nationals held to date (1995, 1996 & 2011), will be looking to get back to the front as he continues his comeback after suffering a broken leg in June. Bryan Smith, currently sitting fourth in the standings, has shown glimpses of pure domination at several points during the season and looks to put all of the pieces together Saturday night.

Historically, AMA Pro Flat Track's premier twin-cylinder class has been dominated by the venerable Harley-Davidson XR750, but recently the legendary orange and black has been challenged by entries from Kawasaki, Ducati, Triumph, KTM and Suzuki, giving race fans a variety of brands to cheer for. Henry Wiles is a non-Harley rider to look out for, as he is looking to improve on his recent fourth place finish at the Indy Mile aboard his Lloyd Brothers Motorsports/ Foremost Insurance-backed Ducati as he wraps up his first year on the potent Italian motorcycle.

After this weekend's event, the series heads back to Springfield, Illinois for the Springfield Short Track and Springfield Mile II September 15-16, 2012. Springfield will mark the last mid-west visit as AMA Pro Flat Track will then head to California and Arizona.

In addition to the twin-cylinder monsters of the Grand National Championship, fans can also expect to see the rising stars of the AMA Pro Motorcycle-Superstore.com Pro Singles class return in 2012. Featuring 450cc single-cylinder engines, the class serves as an entry level to the Grand National scene and often features some of the closest racing of the weekend.

Last year, history was made as Shayna Texter's charge through the 18 rider field had the crowd on their feet in Knoxville. Her hard fought victory over Briar Bauman (now competing for the GNC Rookie of the Year Award) marked the first victory for a female rider at a Grand National event. Texter notched her second win this year at the Sacramento Mile and plans on defending her Knoxville title aboard a Dallas Fort Worth Honda.

The Motorcycle-Superstore.com Pro Singles class is super competitive as the best young riders in the nation try to make a name for themselves, with many looking to make their way into the Grand National class.

An Iowa connection in this class has the Weirbach Racing Team (Ottumwa, IA) fielding a Honda for Californian Dominic Colindres. Colindres has posted one win already this year (Peoria, IL) after joining the team at mid-season and he currently sits sixth in the standings.

Michigan's Stephen Vanderkuur, Ryan Wells (New York), Jake Shoemaker (Pennsylvania), and Jason Isennock (Maryland) are bunched at the top of the point standings and are all within 12 points of each other as the young riders from all around the country chase the AMA Pro Motorcycle-Superstore.com Pro Singles Championship.

Practice is set to begin at 3:30pm with opening ceremonies set to start at 7:00pm.