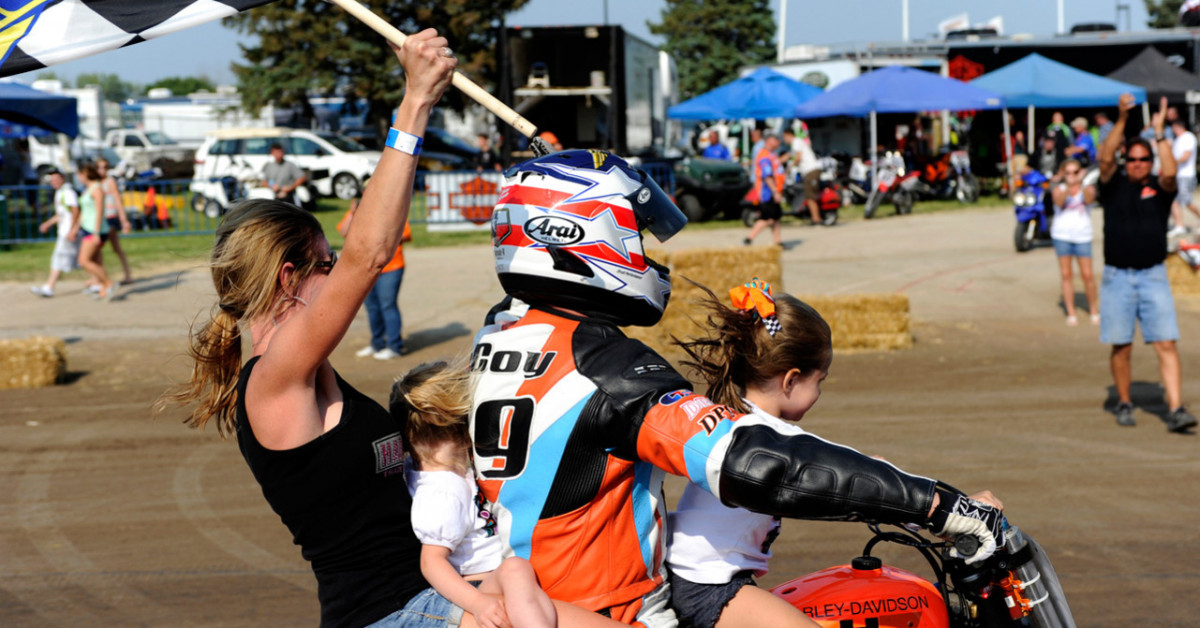 The 90+ degree Memorial Day Weekend continued with racing just as hot as the bullet-fast Springfield Mile. When the final checkered flag fell on the 25-lap National, it was flat track veteran Willie McCoy slipping his Harley-Davidson of Wausau / Independence Harley-Davidson backed XR750 across the line first.

After waiting "forever" to win his first National, this win makes it two Springfield Mile wins in a row, as McCoy used the same strategy last year: Lead the only lap that counts, the last one.

"This is our 'Indy 500,' it's the race to win," said McCoy. "After I won it last year, I thought about retiring, but then I thought maybe I could just win it again. I just rode as hard I could around the outside and was able to pull it off again."

Smith led most of the laps after taking the lead on lap 10. He led 15 laps with a five-rider pack on his heels. "A rookie mistake I guess," said Smith. "I tried to go to the bottom off four on that last lap and it just didn't work."

Smith had assumed the lead on lap 10 when he passed the dueling brothers-in-law, Johnny Lewis on the Scott Powersports / Saddlemen Seats backed Kawasaki and Jake Johnson.

Also in the mix was the Factory Harley-Davison of Kenny Coolbeth, Jr. and the Rogers Racing / Blue Springs Harley-Davidson of Jared Mees. The mad dash to the finish line was McCoy, Johnson, Smith, Mees and Lewis all within 25 hundredths of the lead. Coolbeth was just outside after being bumped off the groove on the last lap.

Halbert and Cheza were done for the day with Robinson and Pearson restarting, although neither would finish the race.

Coy Mathews (King's Kustoms), John Long (Powered by Clark) and Eric Stump (Markbilt Race Bikes) filled out the lead pack, all with a shot at the win.

The MotoBatt "Hard Charger" Award for the Springfield Mile went to Stevie Bonsey, who started in 18th position and battled his way to finish 10th in the Expert Main Event.

Kenny Coolbeth continues to lead the Sunoco "Go the Distance Award" year-end points fund chase by having logged 208 laps for 103 miles. Bryan Smith sits in second place with 203 laps and 101.5 miles and Jared Mees in third at 202 laps and 100 miles. The "Go the Distance Award" is given to the Expert rider that covers the most distance during the 2012 AMA Pro Flat Track season.

In AMA Pro Motorcycle-Superstore.com Pro Singles, Wyatt Maguire leads the Sunoco "Go the Distance Award" with 139 laps, accumulating 65 miles. Jason Isennock is in second with 134 laps and 64.25 miles and Eric Stump in third with 109 laps and 64 miles.