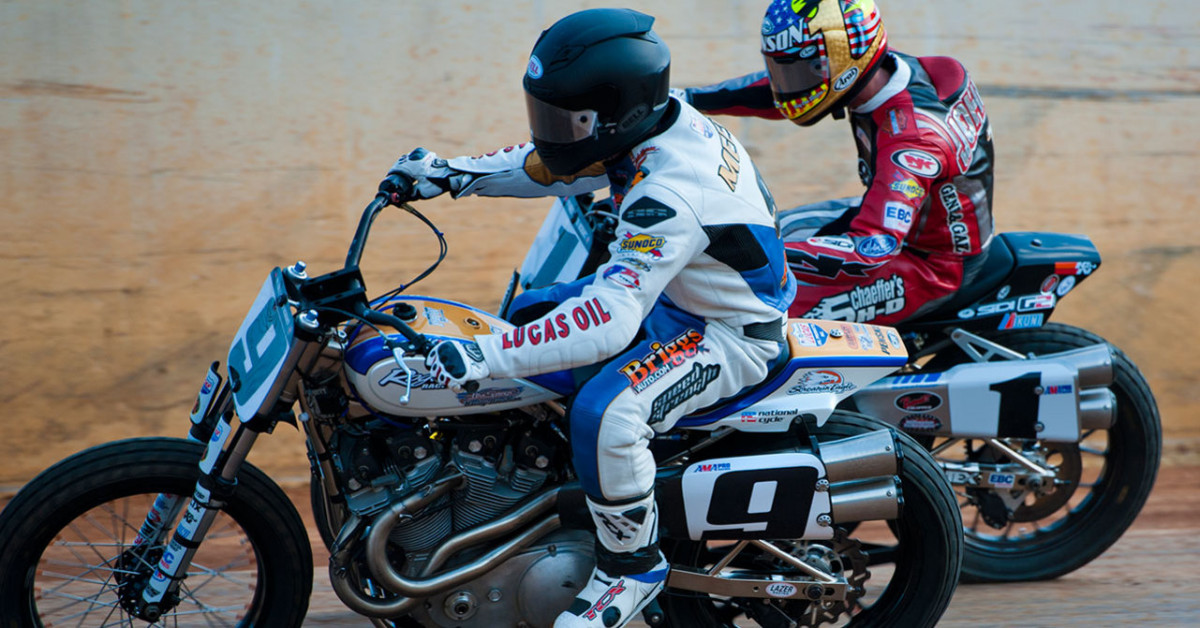 HAGERSTOWN, Md. (July 7, 2012) – Saturday’s AMA Pro Harley-Davidson Insurance Grand National Championship presented by Motorcycle-Superstore.com and Lucas Oil proved to be a wild and entertaining showdown between several prominent riders. It was a sweltering night under the lights at Hagerstown Speedway for the 31st Annual Hub City Classic but the heat had no effect on Jared Mees (Rogers Racing/ Blue Springs Harley-Davidson) as he stole the show and claimed his first victory of the year, increasing his points lead to 15 in the standings.

“My motorcycle was phenomenal, hats off to my team,” Mees said. “We didn’t change a thing the whole time other than to put gas in it. I just had an all-around brilliant bike.”

Mees paced the field most of the day, leading practice and the first qualifying session before dominating the field in Heat 1. Starting from pole position in the night’s main event, Mees quickly ran away from the 18-rider field, winning the race in convincing fashion with a 4.200 second margin. He made it clear that he was getting his first win of the season tonight and wasn’t going to be denied.

“I got off to a decent start; I knew in the dash that Johnson would be my main competition,” Mees continued. “I think it’s going to be him and I, neck and neck the rest of the way. I want it real bad and so does he. This is definitely one of my dream races to win, my family comes down here every time, it just feels great.”

Jake Johnson (Zanotti Racing/ Schaeffer`s Harley-Davidson), who topped Mees to win the Dash for Cash earlier in the night, was the clear cut second-place finisher and looked sharp the entire way. The best race on the track was the battle for third, with Jeffery Carver, Jr. (Kiesow Racing/ Hall’s Cycles Harley-Davidson), Johnny Lewis (Scott Powersports Kawasaki) and Sammy Halbert (South East Harley-Davidson) all trading positions almost every lap. With two laps remaining, Carver got the edge over Lewis by a fingernail and sealed his first ever trip to the podium on the twin engine.

“We got down to the last five laps and I just said don’t give up, just kept running that line,” Carver said. “Lewis and I had a great battle. Awesome to get my first podium here, it’s just really great to be up here on the podium.”

AMA Pro Motorcycle-Superstore.com Pro Singles
As electrifying as the twin engines ran, the AMA Pro Motorcycle-Superstore.com Pro Singles proved to be nothing short of solid performances by promising young talent. Stephen Vanderkuur (Parkinson Brothers Racing Honda) took the lead early before the field was forced to restart following a red flag situation on lap three. On the restart, young gun Gerit Callies (Fun Mart Cycles/ Rod Lake KTM) took the lead and never looked back. With two laps to go and after additional restarts, Callies seemed to press the turbo button to run away from the pack, showing no mercy and pumping his fist as he took the uncontested checkered flag to claim his third main event win of the year.

“Restart after restart will kill you but my team put together a great bike and really gave me a great chance to win,” Callies said. “I can’t thank my team enough.”

Next Up
The stars of AMA Pro Flat Track will return to the Sacramento Mile on July 28, 2012. For tickets and information, please visit http://www.sacramentoflattrack.com/.