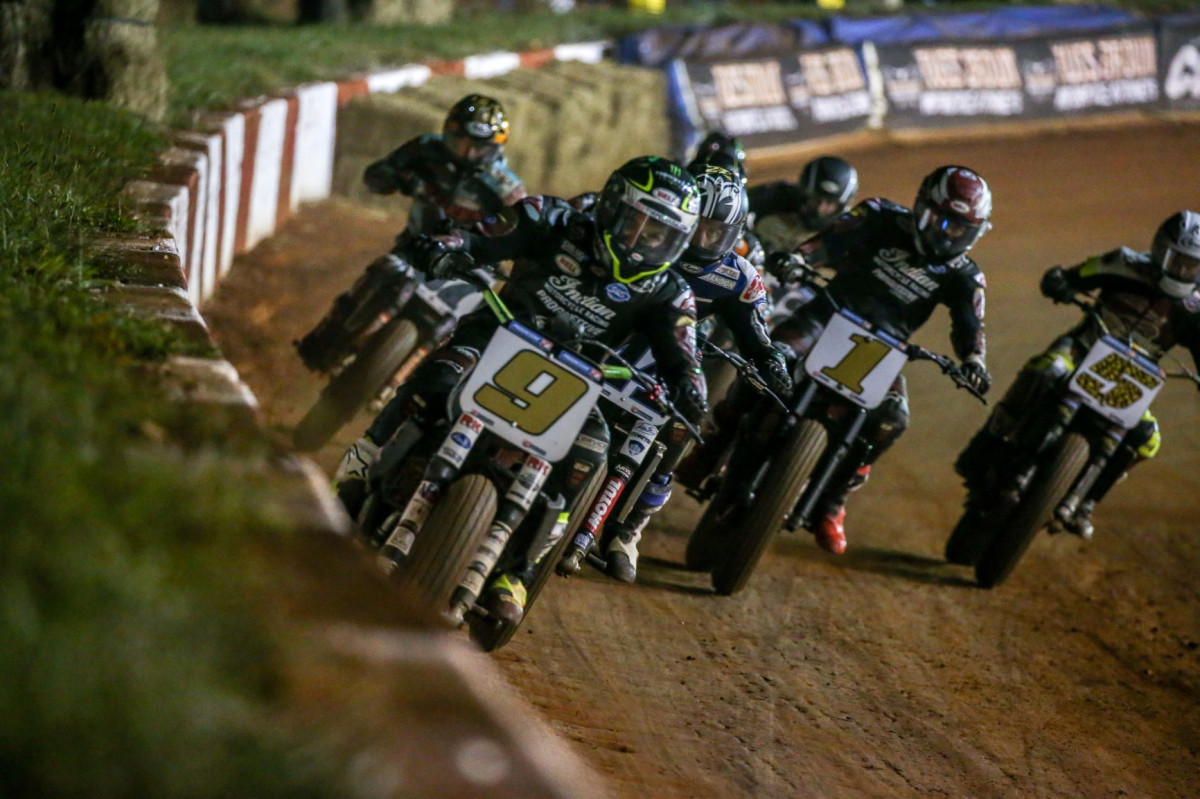 Despite their contrasting résumé, that test proved no less stiff; the up-and-comer gave the masterful Mees all he could handle.

Price actually led the bulk of the race, deftly corralling a racey Mees behind him despite the multi-time series king’s repeated attempts to fight his way through. At one point, Mees’ overtaking maneuver sent him up into the wall, jamming the factory Indian rider’s footpeg into his own brake.

At that moment, it seemed like Price might power away to an easy win, but Mees regrouped, adjusted and mounted another assault. Their vast difference in experience didn’t factor in until after the countdown clocks hit zero, at which point Mees executed a tough-but-fair pass to lead the final two laps and win by 0.339 seconds.

“Early on, I thought I could just settle in and get by, but I don’t know…” Mees admitted. “(Price) was probably getting a little tense at the end because I was throwing everything I could at him. I threw him some bait in Turn 1 where I was acting like I was coming real high and just sliced across the middle and threw in a little block pass.

“It was a great race. I can’t say enough for my team. We’re going to just keep plugging one race at a time. We’re not out of this yet. We’re going to fight back as best we can and what the points are at the end is what they are.”

Meanwhile, title leader Bauman slashed his way forward from an early seventh to finish a lonely third some two-and-a-half seconds back.

Mischler and Daniels shook free from the pack in the early stages of the race and then set about resuming last night’s dogfight. In contrast to the previous round, however, Mischler maintained a slight advantage for almost the entire race, with Daniels trying out his lines and (apparently) biding his time just behind.

He finally struck with only a half lap remaining. The two actually made contact on the back straight with Daniels then forcing his way underneath as they dove into Turn 3 for the final time. Mischler attempted to square the corner back up and take advantage of a small slip on Daniels’ part, but came up just 0.090 seconds short at the flag.

Daniels said, “I wasn’t holding back, I wasn’t trying to not show him what I was doing. That was literally all I had. It was kind of making me nervous; I was pretty much tapped out and I needed a mistake from him, which is what happened. Coming off of (Turn) 2, he spun up a little bit and we got together. I took that thing off into 3 harder than I did all day, just hoping it would stick and it did. It’s awesome.”

As a result of Daniels’ seventh win of the season, the 17-year-old prodigy now leads the championship by 70 points (233-163) over Wiles and Whale, while Rush has dropped to fourth with 151 points. Should Daniels up his current win streak to six next Friday night, he’ll be crowned the 2020 AFT Singles presented by Russ Brown Motorcycle Attorneys champion three races early.

The two quickly separated from the field and raced side-by-side for virtually the entire six-minute plus two lap affair. Rispoli ran the high line while Texter controlled the low line, and rarely did either rider demonstrate a clear advantage in their battle.

Rispoli turned it on late, sliding just out in front as the clock showed 0:00, and that’s where he’d remain to the checkered flag.

The victory placed Rispoli right back up on top of the box just one day after Texter brought his five-race win streak to a conclusion.

Afterward, a typically enthusiastic Rispoli said, “Cory has been riding out of his shoes this weekend -- just so well. I don’t know how you can’t love that racing, me and Cory just going back and forth the entire race. He committed to the low and I committed to the high every lap. He’d just give me a skosh of space. At the end of the day, we got just a little bit of breathing room and I hit the low line and brought it home.”

Once Ryan Varnes (No. 68 RVR/RoyBuilt Don’s Kawasaki Ninja 650 dropped from third due to a mechanical, Chad Cose (No. 49 Wally Brown Racing Harley-Davidson XG750R) assumed the position and spent the remainder of the race with his head down in pursuit of the Rispoli-Texter duel.

Clawing his way back from approximately two seconds back, Cose arrived right on their rear wheels just in time to see the two cross the stripe a few tenths ahead of him.

Rispoli now leads by 48 points (269-221). That means if he gains just two more points on Texter next weekend, he’ll accomplish his stated goal of locking up the class championship ahead of the DAYTONA finale.

The Yamaha Atlanta Short Track presented by Law Tigers I & II will air back-to-back on NBCSN on Saturday, October 10, starting at 10:00 p.m. ET/7:00 p.m. PT. The broadcasts will include exclusive features, cutting-edge aerial drone and onboard footage and the expert commentary of Progressive AFT legend Chris Carr.

Progressive American Flat Track travels to the 2020 season’s penultimate doubleheader next weekend, the Progressive Charlotte Half-Mile I & II at Charlotte Motor Speedway in Charlotte, North Carolina, on October 9-10. The gates will open for fans at 4:30 p.m. ET/1:30 p.m. PT both days with the Main Event programs slated to begin at 8:15 p.m. ET/5:15 p.m. PT. Live coverage of the entire weekend’s racing activities will be available on any device for less than $1 per event via TrackPass on NBC Sports Gold. Very limited tickets remain for these thrilling back-to-back nights of Progressive AFT racing at The Dirt Track at Charlotte Motor Speedway. Fans may reserve their seats to the action at https://store.americanflattrack.com/ebooking/ticket/view/id/3126/.

To score the latest gear for the Progressive American Flat Track fan, visit the Official AFT Merchandise store at https://store.americanflattrack.com.