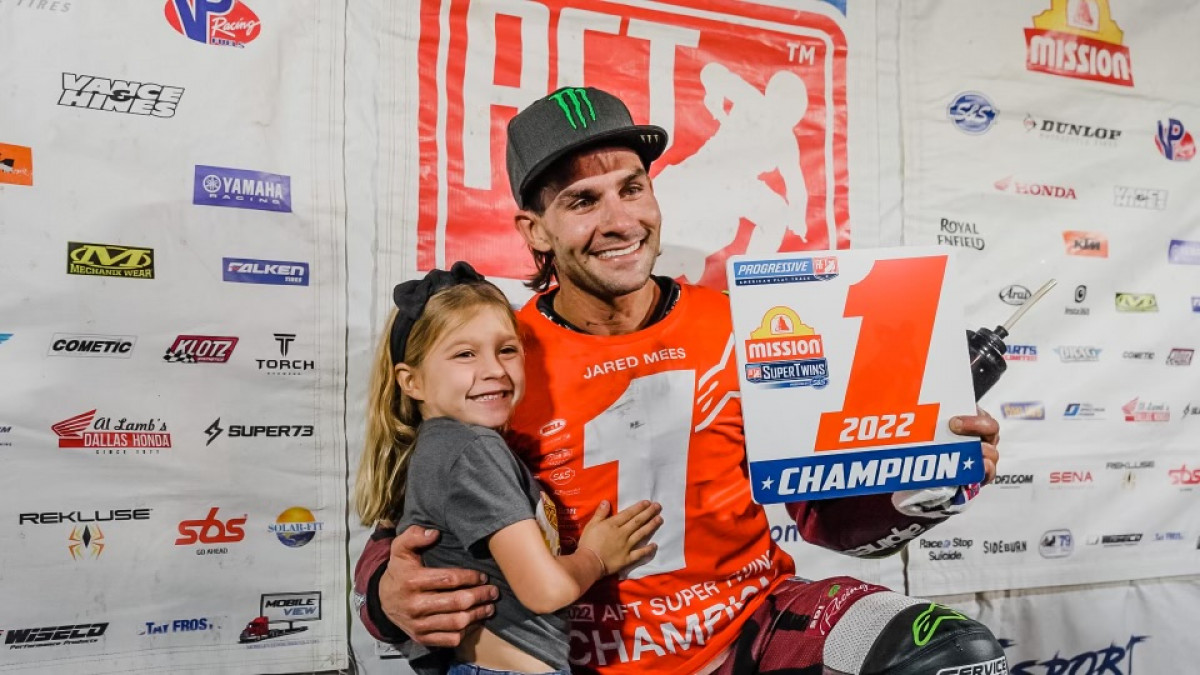 The defending Mission SuperTwins presented by S&S Cycle king was well positioned to retain the #1 plate after outdueling his title rivals on Friday. As a result, he only needed to avoid catastrophe in order to add yet another premier-class crown to his already incredible résumé.

That near catastrophe came in the Semi when Mees made the save of the season – perhaps the save of his career – after hitting a bump and going airborne and sideways with his front wheel loft high in the air. Somehow he not only stayed up on two wheels but made a pass to take the checkered flag first.

With that drama out of the way, Mees basically just had to show up for the Main to win the title. Instead, he chose to fight, executing passes on the likes of Friday winner Jarod Vanderkooi (No. 20 Mission Roof Systems Indian FTR750) and rookie hero Dallas Daniels (No. 32 Estenson Racing Yamaha MT-07 DT) to finish on the podium in third.

“They are all sweet, they are all awesome, and they are all a lot of hard work,” Mees said. “This one is a little different because of what we were up against at the beginning of the year. The Indian Motorcycle backed by Progressive was strong all year long. My team did a phenomenal job. We had no mechanical failures all year, and we were able to come into this last race with a nice cushion. I was able to go out there and race hard. I’ll be honest, I really wanted to cap off the year with a win.”

That win instead went to Brandon Robinson (No. 44 Mission Roof Systems Indian FTR750), who inherited the lead from JD Beach (No. 95 Estenson Racing Yamaha MT-07 DT) after Beach’s machine expired just prior to mid-distance with a potential Progressive Triple Crown victory within his reach.

Beach’s misfortune brought out the red flag, after which Robinson had to fight off Briar Bauman (No. 3 Indian Motorcycle/Progressive Insurance FTR750) to claim his third win of ‘22.

Robinson said, “This is the perfect way to end the season, just knowing you are the baddest man in the last race of the year. And you get to sit on that all offseason. That’s a great feeling.”

Daniels finished close behind Mees in fourth, while fifth went to Vanderkooi. That was good enough for the VDK to add the $25,000 prize awarded for the Progressive Triple Crown to what was already destined to be an unforgettable weekend for the Ohioan.

Vanderkooi said, “I was nervous as can be – way more nervous than yesterday. This is just awesome.”

Beach, meanwhile, made the restart but could only advance to 11th after being forced to start from the back of the field. Despite falling from second to fourth in the final standings (266), ranking behind Mees (298), Bauman (276), and Daniels (267), the Estenson Yamaha pilot did end the year with the bragging rights for taking the most wins of any rider this season with four.

Similar to the situation of Mees in the premiere class, Jesse Janisch (No. 33 Vance & Hines Harley-Davidson XG750R) got the hard work out of the way prior to the Mission Production Twins presented by Vance & Hines finale and only required a relatively modest result on Saturday to lock down his first-career Progressive AFT title.

Unlike Mees, Janisch was perfectly happy to put in that modest performance.

And that’s where he’d finish to lock down that long elusive #1 plate.

“It’s amazing,” Janisch said. “Honestly, that race was kind of boring. I just had to maintain. It was pretty wild – I was up front early – I was around fifth and then it was just about moving over when everyone was coming through. I was just taking my happiness to the back.

“Shout out to the Vance & Hines team. Everything about this is from them. They gave me the opportunity last year to fill in, and they gave me a heck of an opportunity this year. We had a great season – seven wins and 14 podiums. This is good – I don’t know what else to say.”

For Bromley, the runner-up saw him successfully complete his perfect podium streak on the season, as he registered six seconds and two thirds in just eight starts. Meanwhile, it was Zabala’s second visit to the box after previously finishing third at Springfield.

And while he ultimately came up short in his quest for a third class crown, Cory Texter (No. 1 G&G Racing/Yamaha Racing Yamaha MT-07) went out like the champion he is. The two-time Mission Production Twins conqueror grabbed the holeshot and proceeded to dominate the final Main Event of his long and varied professional racing career.

Texter said, “First off, hats off to Jesse. I’m so proud of him. If I couldn't win it, he’s a heck of a competitor, and it’s cool to see somebody else enjoy that moment. It was well deserved.

“Man, I’m going to miss it. It’s been a great ride. A long career – I’m burnt out and it’s been a lot of hard work – but to finish off with a win is great. I was really enjoying it, trying to soak it in while still trying to lead the race. Hats off to my team, G&G Racing. Without their help, none of my dreams would have come true. They gave me a shot four years ago when nobody else would, and we’ve had a really good run.”

But when an intra-team scrap for second broke out, Kopp appeared to have the perfect opportunity to make his escape at the front. That only proved effective until Gauthier fought his way up from fourth into second, as the ‘19 class champ clearly had the measure of Kopp once into the position

Following a temporary stoppage due to a red flag, Gauthier made his move up the inside of Kopp. A second red flag reverted the order, and Gauthier promptly pulled off the same pass yet again.

Kopp remained on Gauthier’s rear wheel but was unable to retaliate, crossing the stripe in second, 0.196 seconds short of obtaining a single-season record-equaling eighth victory. Mischler came home third, another 0.089 seconds back.

The win saw Gauthier (255) leapfrog both Mischler (250) and Trevor Brunner (No. 21 Estenson Racing Yamaha YZ450F) (249) – who finished seventh on the night – to steal away second in the final rankings.

“That was the best win of the year for me,” Gauthier said. “I came into this last race of the year and just wanted to enjoy it. We definitely did that. I just played my cards right tonight. I was fourth at the beginning, got past my teammates and then worked on Kody. He was riding a flawless race, but I was just getting stupid good drives out of four, and it just ended up working out in my favor. I’m super stoked on this one.”

You can catch the livestream of every weekend’s racing activities on FansChoice.tv. FansChoice.tv provides free-to-view livestreaming of Practice and Qualifying. FansChoice.tv subscribers will then be able to watch the drama unfold from Opening Ceremonies through the Semis, Main Events, and podium celebrations. FansChoice.tv offers two subscription options, granting unlimited access to premium AFT content. Monthly subscriptions start at just $7.99, while a six-month subscription is available for $44.99.