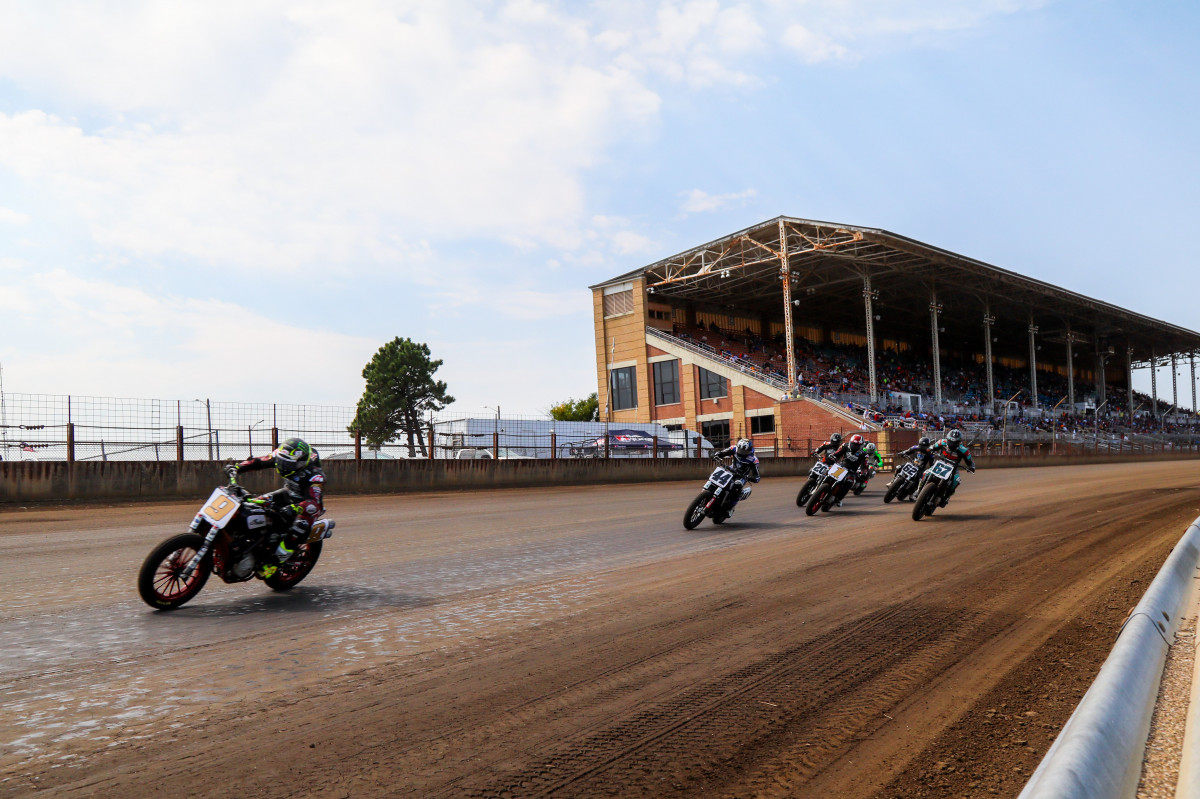 Robinson looked to be the first to drop from contention, drifting to more than a half second back when the high line stopped working for him with eight minutes to go. Rather than cruise to an easy fourth, however, he altered his strategy and made a dive-bombing low line work to his advantage. He officially rejoined the fray with five minutes left, just as Carver and Mees were throwing elbows at triple-digit speeds.

With two minutes to go, Bauman struggled to maintain the pace. He stayed close enough to take advantage should anything happen but didn’t appear to have what it took to go for the win.

Carver, on the other hand, was in rare form; the Springfield crowd favorite was comfortable enough to blast around the high line while looking back over his shoulder at his rivals, sliding his FTR750 at full song. Unfortunately, his race ended in bitter disappointment when his machine broke while running a close second with less than two laps remaining.

That unfortunate turn of events for Carver left Mees and Robinson to decide the winner. Robinson attempted to square up Mees coming off of Turn 4 for the final time and nearly pulled it off, falling just 0.043 seconds short of victory. Bauman rounded out the podium just under two seconds back.

Mees said, “I’ve raced a lot of Springfield Miles from like 2002 on, and this was one of the most different Springfield Mile racing lines I’ve ever raced. I’m not saying that in a bad way -- it was cool that we had a really different track from yesterday to today, and it was just down to which team and rider could adapt to it the quickest.”

Bronson Bauman (No. 37 Indian Motorcycle/Progressive Insurance FTR750) won out over Davis Fisher (No. 67 BriggsAuto.com Indian FTR750) and Bryan Smith (No. 4 Harley-Davidson/Vance & Hines XG750R Rev X) in their battle for fourth.

Saturday’s winner, Sammy Halbert (No. 69 Coolbeth-Nila Racing Indian FTR750), was stuck in the second pack early before suffering a mechanical issue, which forced him out completely with eight minutes remaining on the clock, after another day of clocking very fast times in qualifying sessions and the AFT SuperTwins SuperPole.

As a result, Mees now boasts a relatively healthy title advantage over primary rival Bauman (132-119). Halbert remains in third with 95 points but lost most of his padding over Robinson (88) and the second Bauman (81) going into next weekend’s double header at Williams Grove Speedway.

It took James Rispoli (No. 43 Latus Motors Racing Harley-Davidson XG750R) more than ten years to return to the top of the dirt track podium but only two races to get back there again. The AFT Production Twins points leader extended his championship advantage on Sunday with a victorious ride in an absolute stunner at the Springfield Mile.

During the opening few minutes of the race, those three were in control; Cose did the bulk of the leading over Rispoli, with Texter keeping the honest from close behind in third.

However, when Ben Lowe (No. 25 Roof Systems of Dallas/Bruce Lowe Excavating Yamaha MT-07) blasted around the outside to move into second and then Hayden Gillim (No. 159 Burcham & Glidden Racing Harley-Davidson XG750R) went way low to drive under the entire pack and briefly move into the lead, all bets were off.

An astonishing final five minutes saw eight riders within a half-second of the lead, trading positions in a relentless, nearly un-trackable fashion. Virtually every line was in play and none of the eight seemed any more likely than another to get to the checkered flag first.

The wild Main Event took another twist with less than a minute remaining on the clock when Patrick Buchanan (No. 175 Parkinson Brothers Racing/PRO 1 Industries Kawasaki Ninja 650) went down and brought out the red flag.

After a short stoppage, the melee picked up right where it left off. At the restart, Varnes seized control of what had become a four-lap sprint to the stripe. Saturday’s winner held the lead spot until the clock hit 0:00 -- indicating that two laps remained -- and Cose and Lowe stormed up alongside.

Rispoli re-entered the picture as the white flag waved, diving under Cose to take the lead on the final lap. A perfect launch off of T4 secured the win, while Lowe and Cose also overhauled Varnes to finish in second and third, respectively.

Race-winner Rispoli said, “Man, I am so stoked! I love it! I got second here last year and finished fifth yesterday and we were in a bit of a dismal place. We had to respond, and the whole Latus Motors team put together a great package today. We made a lot of changes to get in the hunt.

“It was a carnage race -- absolute carnage. In the end, I fired it up the inside in Turns 3 and 4, was able to get a little bit of a gap, tucked for dear life, and no one came by. I’m fired up.”

This weekend’s races will air on NBCSN, with the Springfield Mile I set to air on Saturday, September 19, starting at 3:30 p.m. ET/12:30 p.m. PT, and the Springfield Mile II to follow on Sunday, September 20, at 3:00 p.m. ET/12:00 p.m. PT. The broadcasts will include exclusive features, cutting-edge aerial drone and onboard footage, and the expert commentary of AFT legend Chris Carr.

American Flat Track will be back in action in just a few days’ time with the Williams Grove Half-Mile I & II doubleheader in Mechanicsburg, Penn., on Friday, September 11th, and Saturday, September 12th. Gates will open both days at 3:00 p.m. ET/12:00 p.m. PT with the Main Event program set to begin at 7:45 p.m. ET/4:45 p.m. PT. Tickets are available online at https://store.americanflattrack.com/ebooking/ticket/view/id/3130/#selectTickets. Live coverage of the entire weekend’s racing activities will be available on any device for less than $1 per event via TrackPass on NBC Sports Gold.