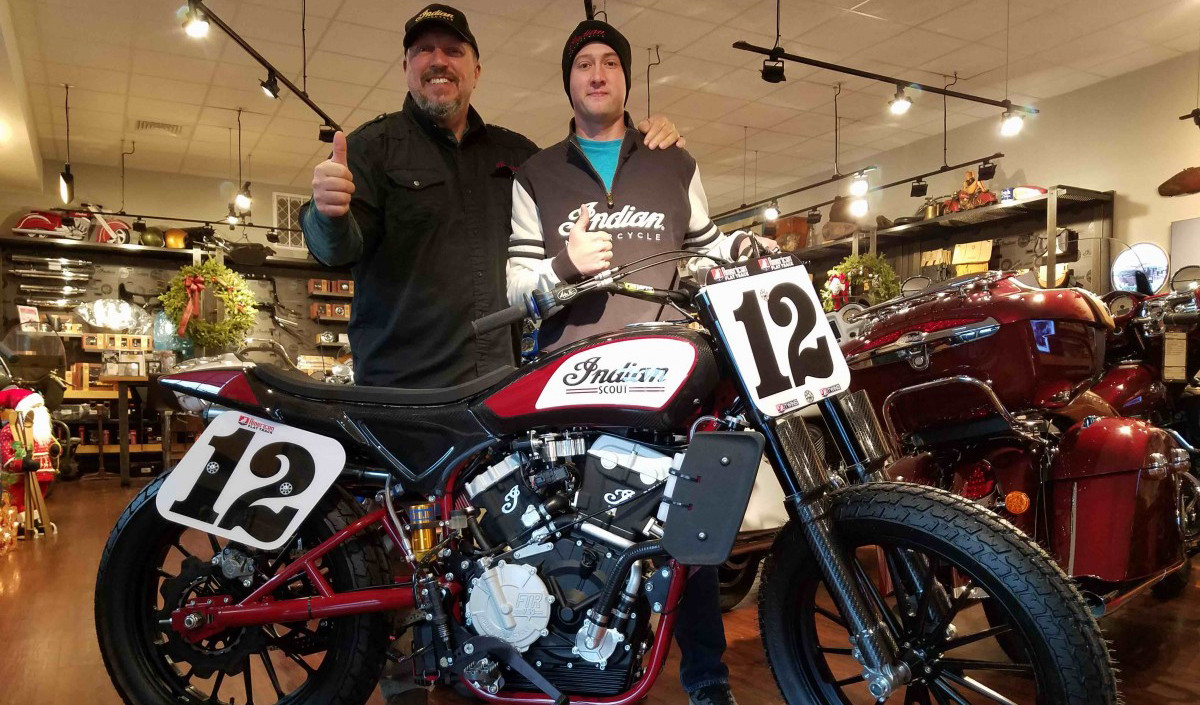 National No. 12 Jay Maloney to Ride Indian Motorcycle of Springfield-backed FTR750 in 2018

When Indian Motorcycle of Springfield owner Dennis Bolduc learned of the FTR750 racer some eighteen months ago, he knew he had to own one.

After all, with 50-some vintage Indians in his collection, coming from a family with direct ties to the original Indian company back in the ’30s and ’40s (his grandfather worked at the factory), and knowing chapter and verse of Indian’s storied racing history, owning the latest iteration of a real Indian Motorcycle race bike was a no-brainer.

“I’m an Indian guy,” Bolduc told us recently, “and a collector. So yeah, I was gonna own one. It’s a beautiful bike.”

At first, the plan was to feature the FTR in his spacious and historically impressive ‘museum’, which doubles as his Indian Motorcycle store’s showroom – and tends to attract plenty of attention from motorcyclists and non-motorcyclists alike in the northeastern U.S. 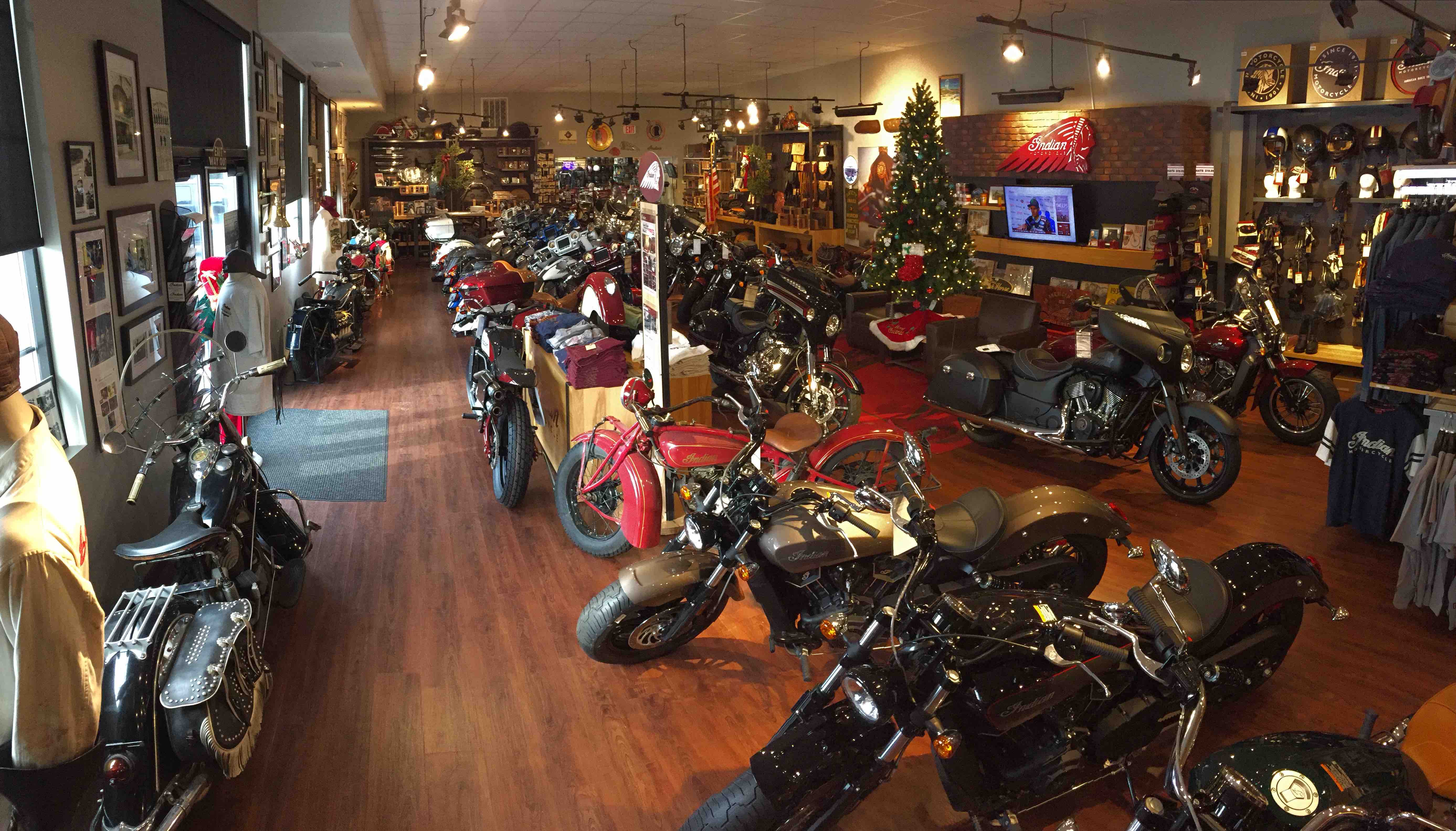 But then things changed.

“I got a call from Jay Maloney,” Bolduc adds, “who I’d been talking to for a couple years about going racing. We thought we’d maybe build an AFT Twins racer using one of the Indian street bike engines. But when the FTR thing happened, everything changed. Suddenly, going racing on what looked like an extremely competitive motorcycle seemed like a great way to re-connect this legendary area – where Indian was born – and my Indian dealership with National-level flat track racing, and have some fun in the process.”

Bolduc’s story is an example of that collaborative ‘perfect storm’ in motorcycling, where a major manufacturer gets its dealers excited enough – via a competitive and reasonably affordable race-spec motorcycle – to support teams on a national level. Harley-Davidson did it for decades with its XR750 (and trying to do again with the XG750R), and with its suddenly dominant FTR750, Indian Motorcycle is following suit.

If Bolduc is excited about the plan to run the entire 2018 AFT National schedule on his burgundy and black racer, 30-year-old Maloney is positively over the moon about the chance to ride an Indian FTR against some of the best flat track riders in the world. 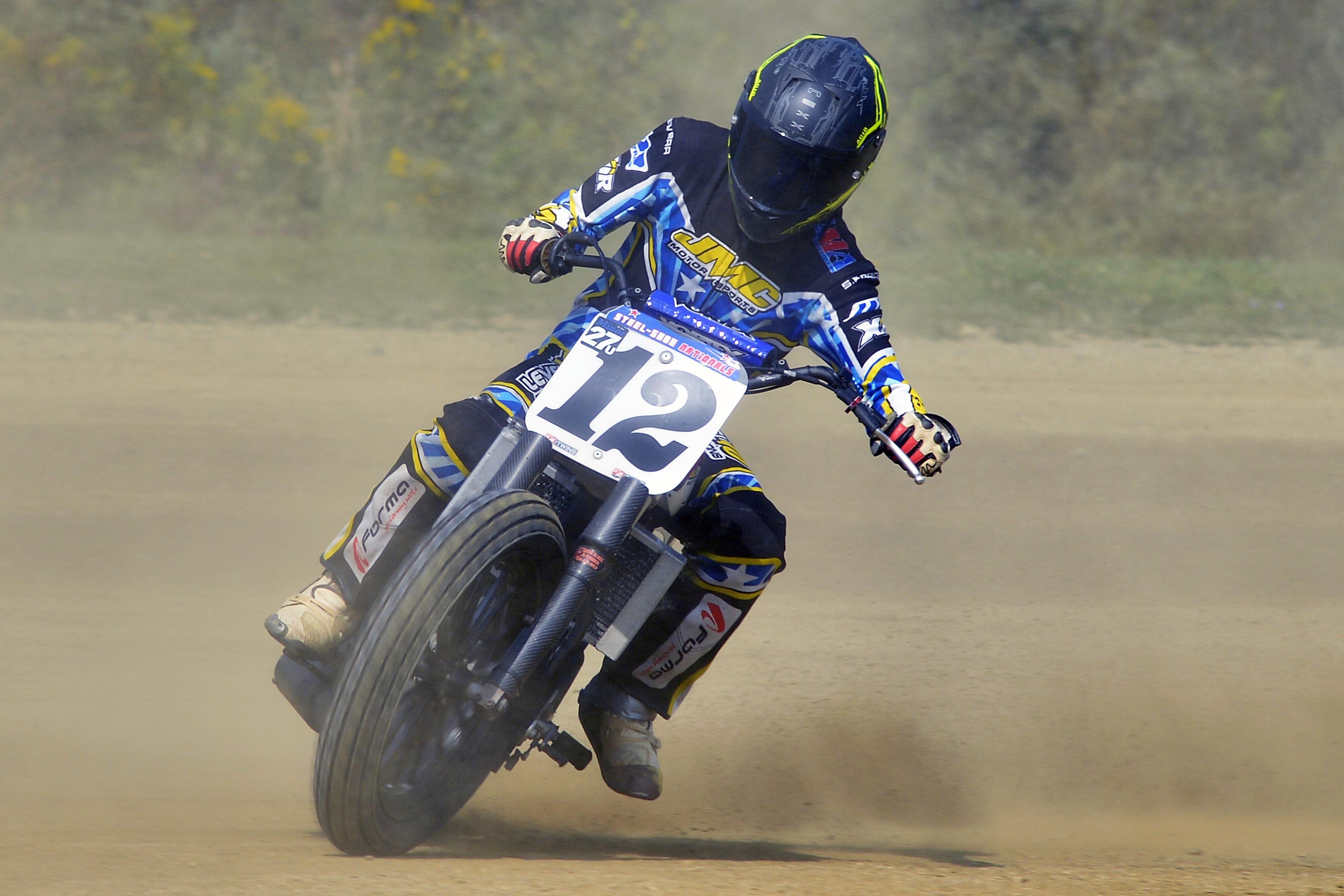 Maloney, shown here aboard one of his team's Kawasaki racers, is excited to ride the FTR750.

“The FTR is an amazing machine,” says Maloney. “It’s a true state-of-the-art racer, and I’m extremely excited to be able to race this motorcycle with support from Dennis and Indian Motorcycle of Springfield. But there’s more to it than just the bike. For 2018 we have all our ducks in a row in terms of our team setup, and I can focus more on riding and not worry so much about maintaining equipment, logistics, etc.

Of course, there’s also the whole Springfield, Massachusetts and Indian history connection thing, which Maloney is understandably proud of. “Riding an Indian for this dealership,” Maloney sayd, “one representing Springfield and the original home of Indian? Well, it’s pretty cool. I feel privileged.” 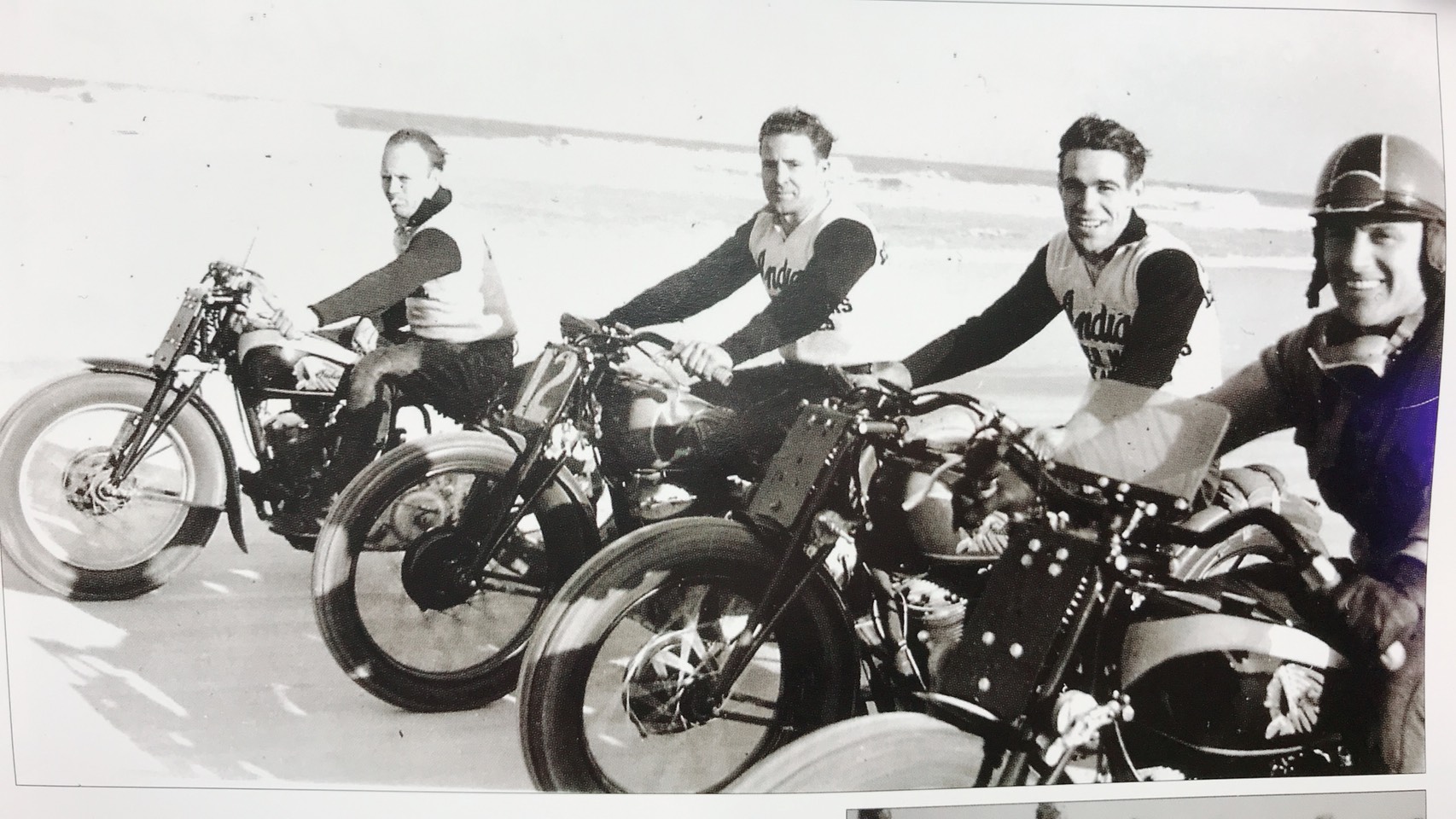 Bolduc agrees. “There’s such a rich Indian Motorcycle and Indian racing history from this area,” he says, “and a huge historical tie to what’s going on now with AFT and Indian. Frank ‘Fritzie’ Baer, who founded the Fritzie’s Roamers club in 1933 and is an AMA Hall of Famer, was instrumental in a lot of that racing history. He worked for the Indian factory, was an AMA referee and race announcer, and also supported a highly successful race team that included Jimmy Hill, Woodsie and Frenchy Castonguay, and his sons Bobby and Butch Baer. I enjoy all this local Indian history, and going racing on a new Indian racer with Jay and his guys seems like a good way to bring a lot of it back into focus.” 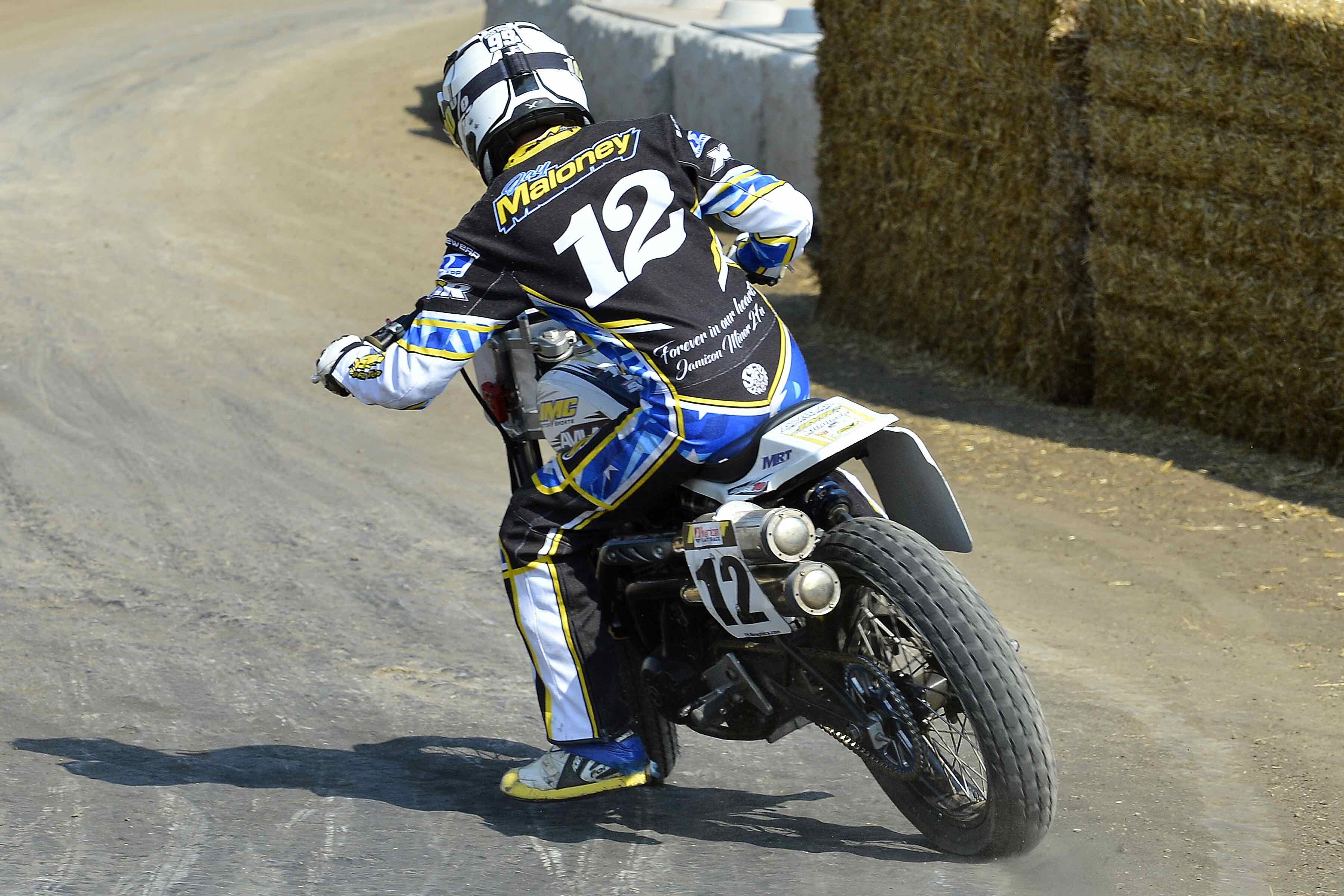 Maloney's tribute to a racer and friend: "Forever in our hearts: Jamison Minor, 27u."

“It all feels pretty good,” says Bolduc. “Indian of Springfield has only been here since 2014, but we’ve become a top Indian dealer in not of lot of time, and we really do enjoy celebrating the history of the company and its machines. We have 15-20 Indians – many with original paint and patina – on our showroom … sorry, museum … floor all the time, and it’s fun to teach the public and our customers the history of Indian Motorcycles. Most folks don’t realize the impact Indian had for so many decades in American motorcycling. So we like to show ’em!”

And if some of that showin’ turns out to be Jay Maloney showing the back of his leathers to the rest of the AFT Twins pack during 2018, that’ll be quite all right with Bolduc. After all, he’s an Indian guy, down and dirty.