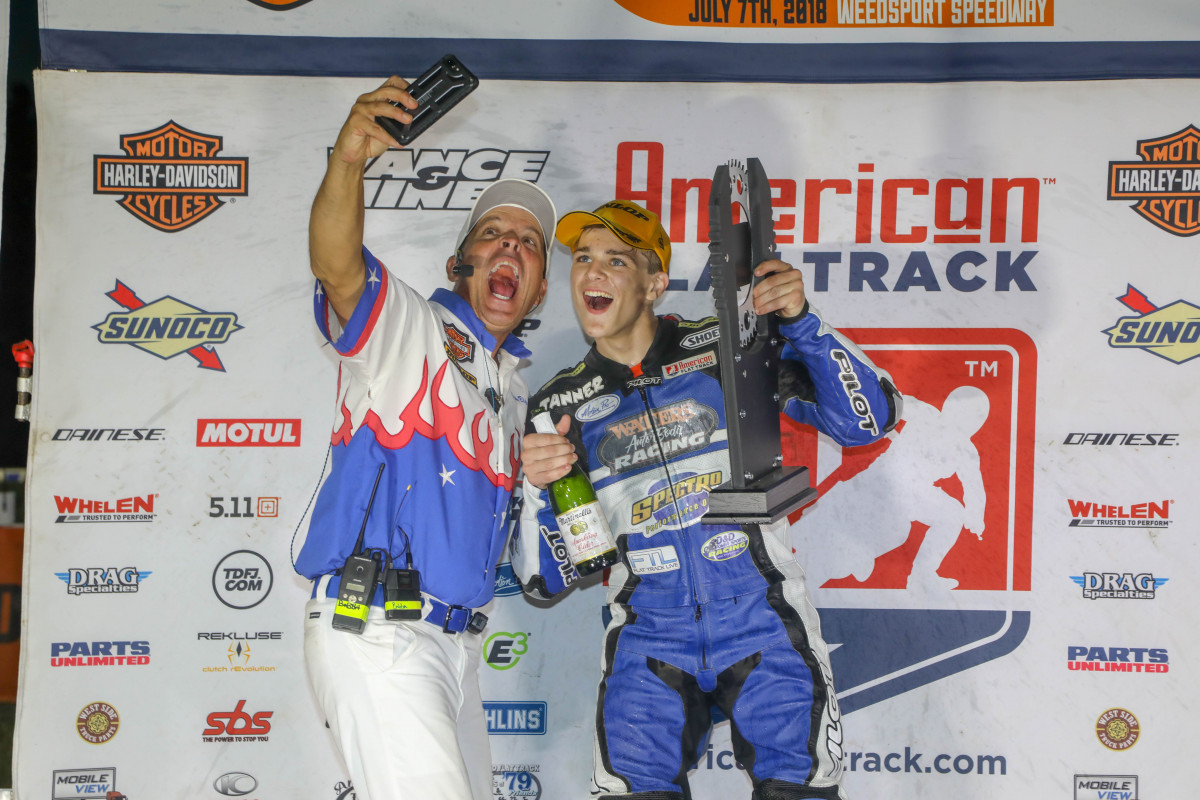 DAYTONA BEACH, Fla. (July 17, 2018) – Unless you’re from the Pacific Northwest, Tanner Dean is not exactly a household name within dirt track circles. But after the seventeen-year-old’s impressive and unexpected win in the AFT Singles division at the Harley-Davidson New York Short Track at Weedsport Speedway on July 7, it may soon become one.

Dean’s victory at Weedsport was unexpected because until this past weekend he’d made only five Main Events in 2018. He’d finished no better than 11th, with Main Event results of 12th, 17th, 14th, 12th and 11th before his win in New York. (The scenario was eerily similar last year; Dean only made six Main events in 2017, scoring 11th twice, 10th twice and 9th just once while winning at Calistoga.)

His victory moves him up to 14th in points and places him in an exclusive group of eight riders with AFT Singles wins this year.

We caught up with Dean during the summer break while he was in New York working for Waters Autobody, his primary sponsor since joining the team at the Red Mile round in Kentucky – where he impressed immediately, winning his Heat. We asked him about his (relatively) new team, his 2018 season and, most importantly, his win on July 7 at the New York Short Track.

You sort of came out of nowhere at Weedsport. How did that happen?

I’ve had a pretty slow start this year, and up until Weedsport really haven’t been able to find my groove. But it all came together there with a lot of help from Dave and Rhonda Waters and their team, who I’ve been with since Kentucky. It’s a really nice deal. I’m also pretty comfy on the KTM, as I’ve been a Honda rider for just about forever – and started the year on one. Lima for me was a struggle; I’m a clay track rider, and not much of a cushion track guy. But Weedsport was redemption! The whole weekend went well for me. We qualified fast, got second in the Heat and second in the Semi, so I had a feeling I’d be flying. And I was.

Well, it handles everywhere, it’s fast, and it seems to get traction in any condition. I was comfortable on it immediately, and that showed when I won a Heat on my first-ever ride on it in Kentucky. Dave and Rhonda and the team seem to have them figured out, too, so that adds an extra dimension.

You won wire-to-wire at Weedsport but had company late from Dan Bromley. You guys even played bumpity-bump a couple times.

[Laughs] That was a love tap. Brom and I are friends, so I wasn’t too worried That sort of thing happens in flat track racing. Dan was basically telling me, ‘I’m right here, Mister, so don’t mess up or I’m gonna pass you!’ He was messin’ with me, and I’d have done the same thing to him. When that happens I try to stay focused, because that’s what’s going on there; the rider behind you is trying to mess with your head. You can’t let it get to you or freak out or you’ll make a mistake and lose the position. 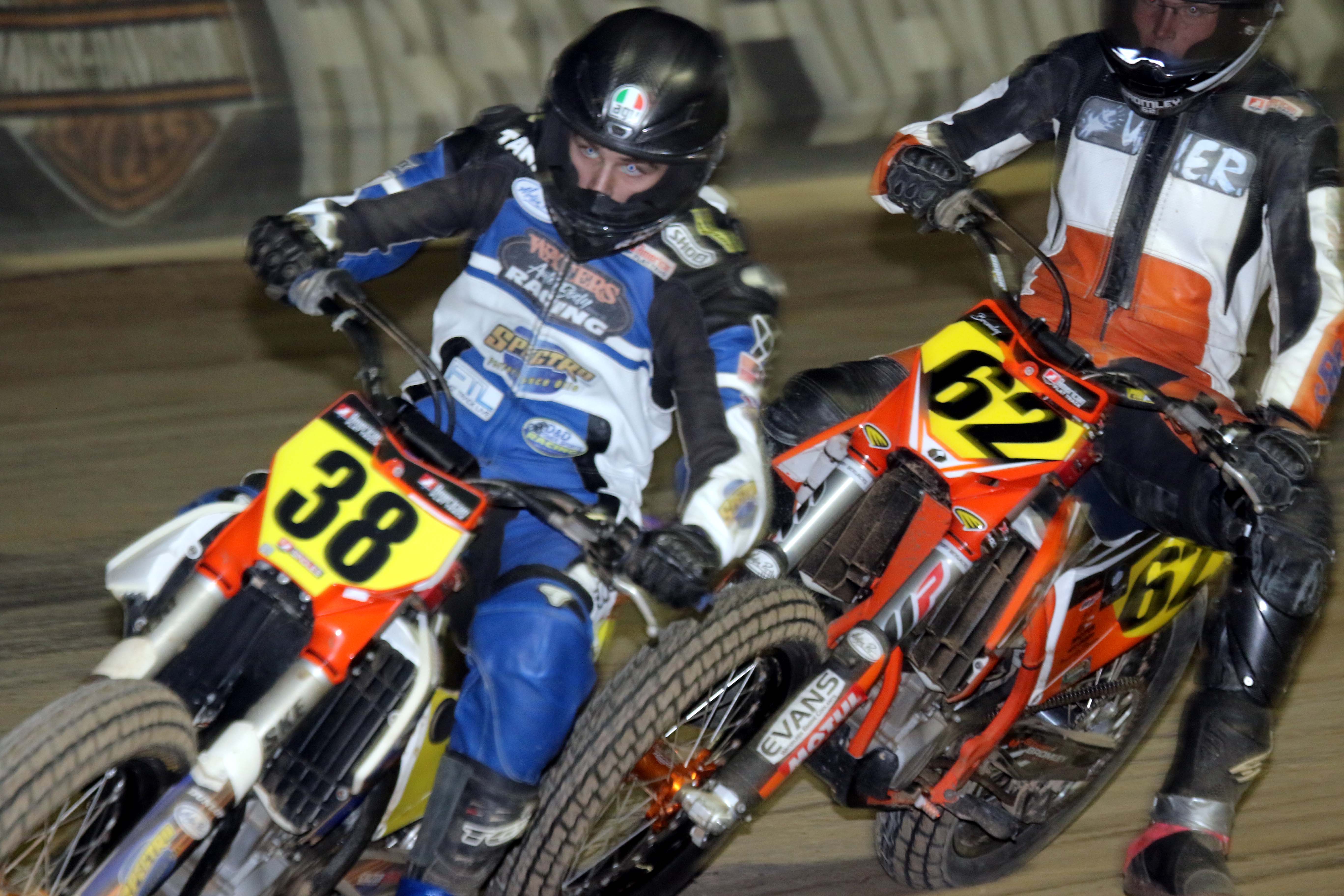 Usually it’s just a nudge, and you don’t worry about it. You just focus and keep your head and breathe and ride like you know how. That works for me, and it worked that night. But if it’s a hard hit and it moves me around, I’d probably retaliate. But that’s not what happened on Saturday night. Brom was just being aggressive and pushing me and riding really well. 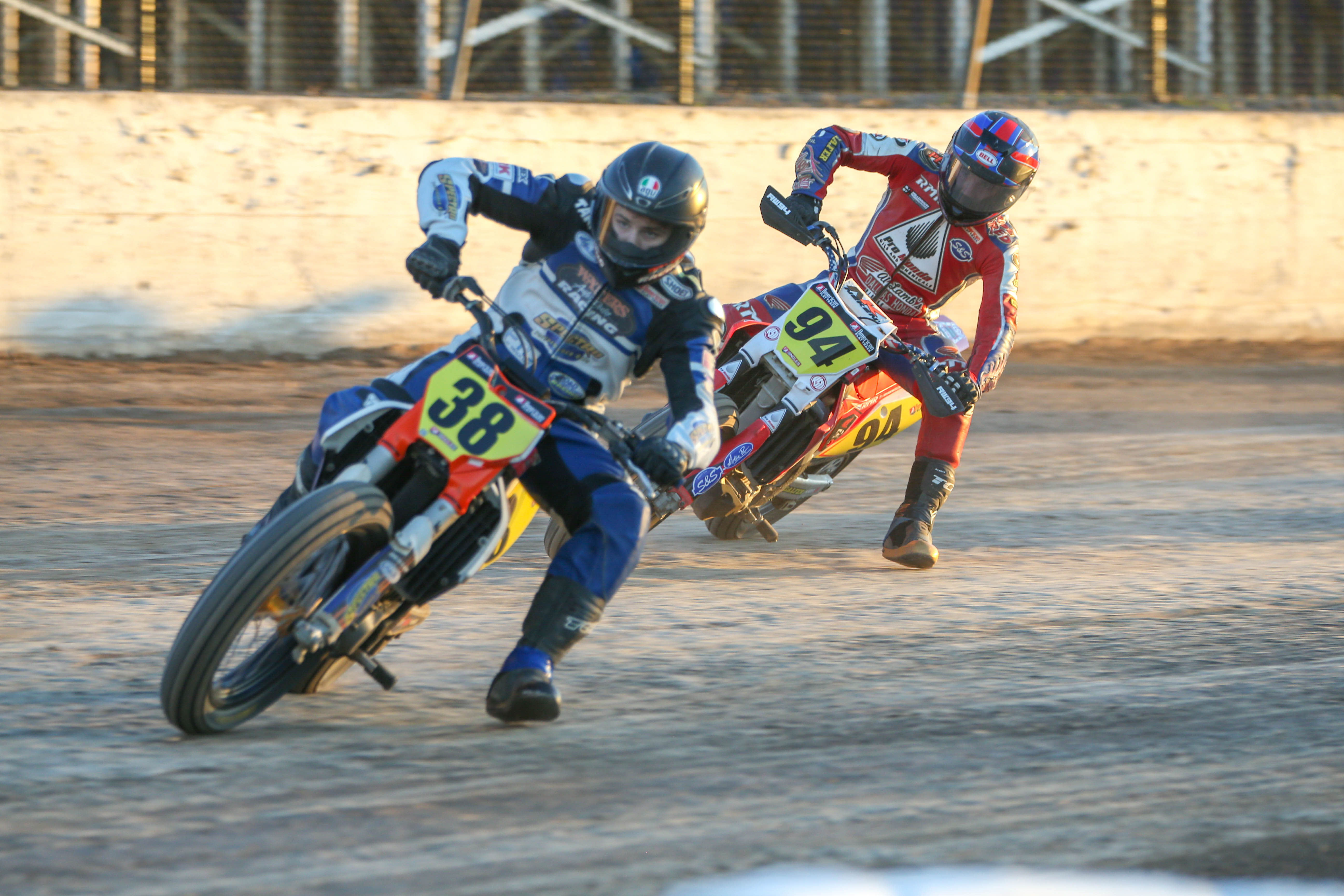 I come from an area of the country where the racing is pretty aggressive, so I’m used to it. Davis [Fisher] is from Oregon, and Brad [Baker] and Sammy [Halbert] are from Washington, where I’m from. I’ve spent a lot of time with those guys, riding and racing and training over the years. I’m only 17, and so they’ve schooled me a bunch during all that time, and I’ve learned a lot from them. They’re good guys, for sure, and great racers.

Plans for the remainder of 2018 and beyond?

I’ll be staying on with the Waters Autobody team, working for them on the side and flying to the races. I’ll be a senior in high school come September, but next year, after school’s done, I’m planning to keep racing, make a living doing it and probably move to the East coast, get a job to help support the team and myself, and keep racing. Professional racing is my goal. That’s what I’m all about right now.

Anyone you want to thank? 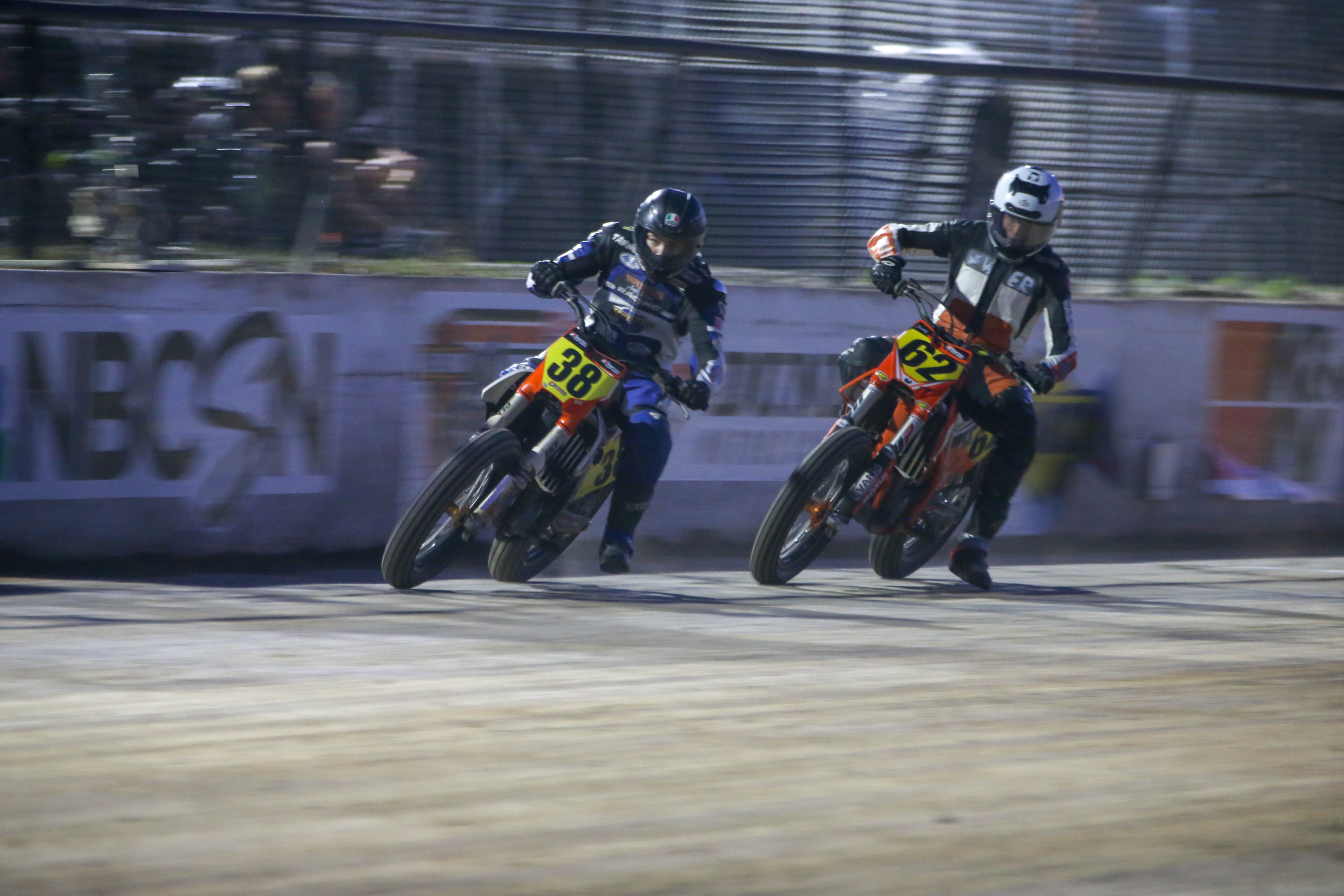 Dean leading Bromley during the New York Short Track Main. Bromley came to the front after a bad start but couldn't make the pass. 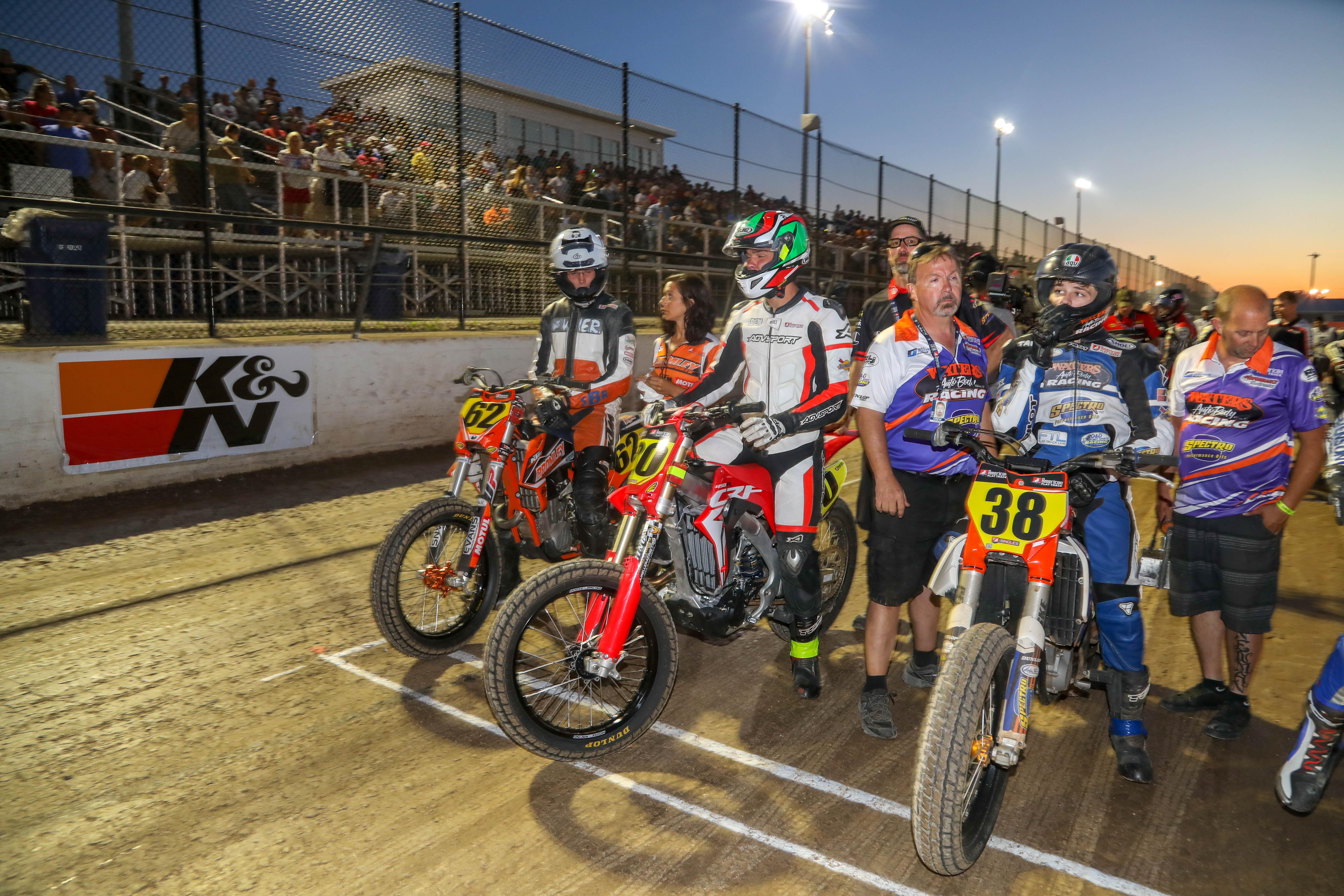 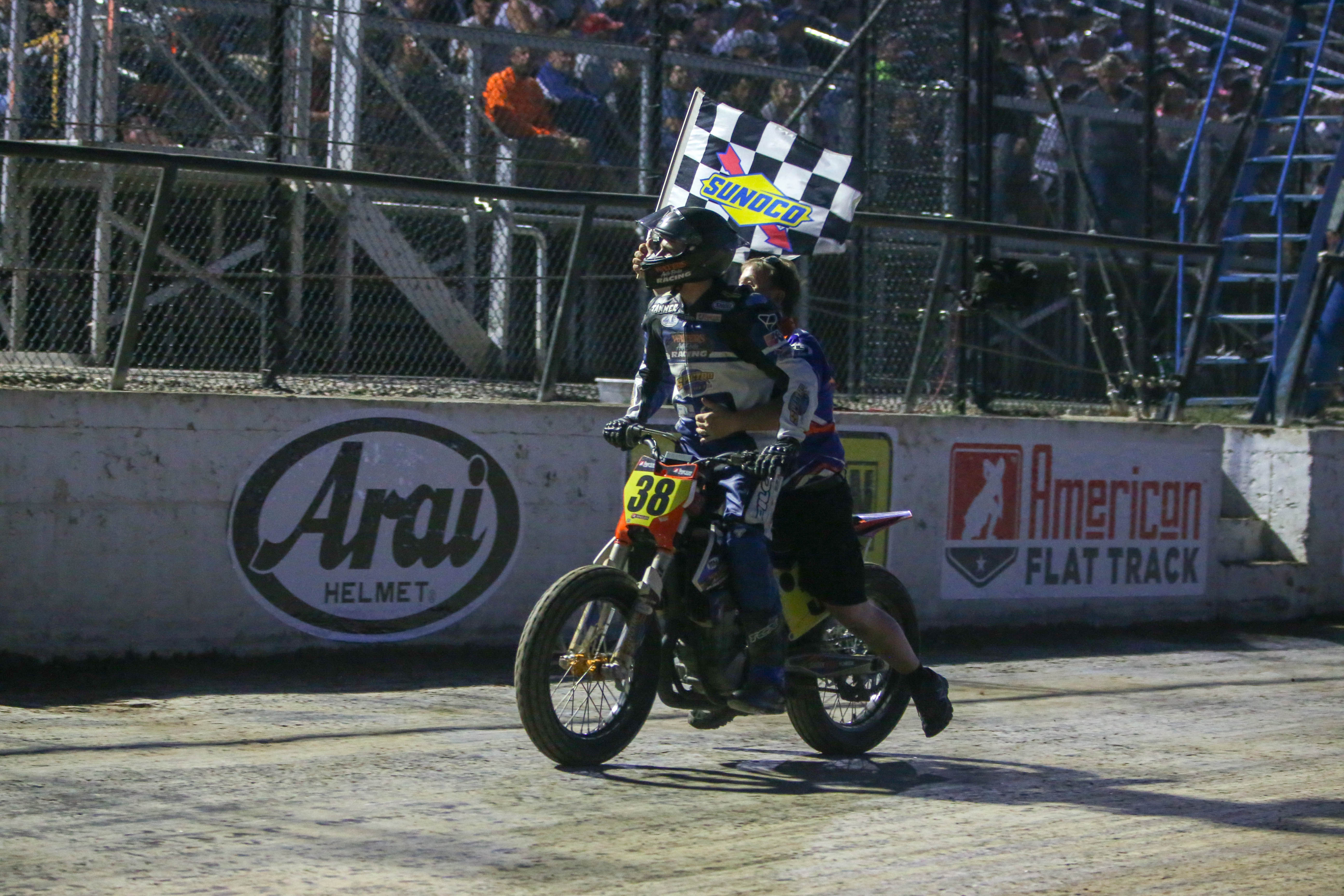 The victory lap with team owner Dave Waters was sweet indeed; it was Dean's first win in 2018, and only his second in 29 races. 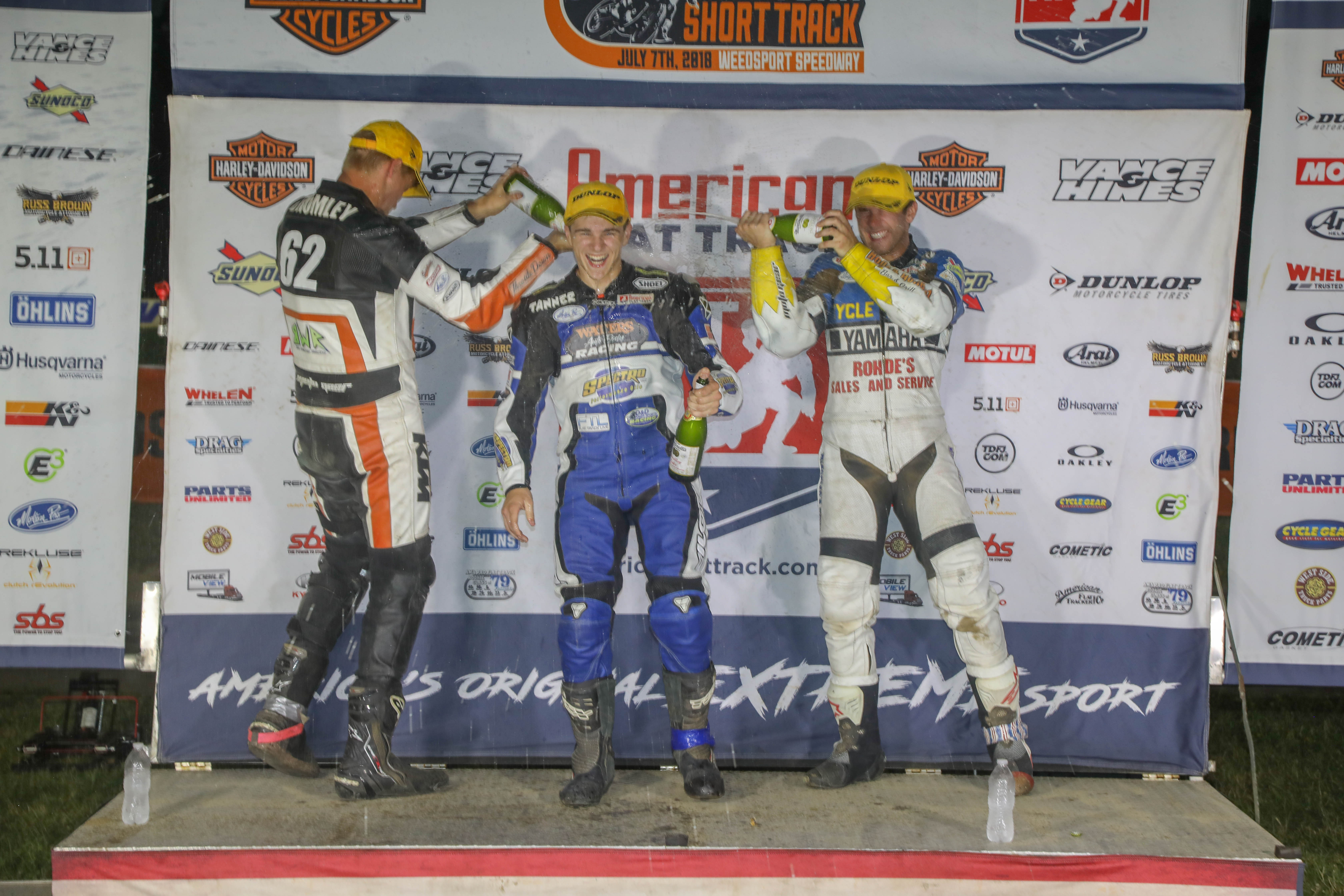 "Talk about a wacked-out podium!" Dean said afterward. "Morgen [Mischler] is always giving me crap, and Brom poured champagne down my back..."