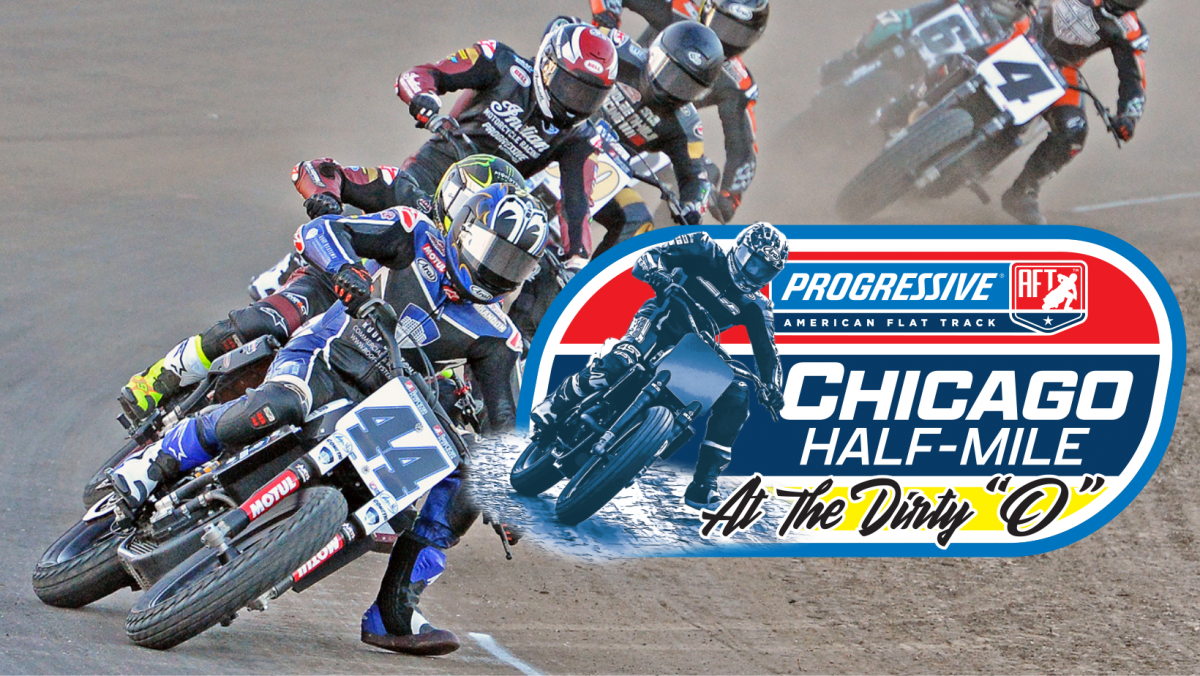 DAYTONA BEACH, Fla. (May 25, 2021) – The Progressive American Flat Track paddock is well accustomed to Memorial Day weekends in Illinois, but it’ll have a different flavor in 2021 with the long-awaited return of the Chicago Half-Mile on Saturday, May 29.

Now that the Springfield Mile owns a Labor Day weekend doubleheader, the traditional late May date moves a couple hours north to the Dirt Oval at Route 66 Speedway in Joliet, Illinois, marking the first of five rounds in the state this season.

It also marks the series’ first stop at the wide and fast “Dirty O” Half-Mile at the mega Chicagoland Speedway complex in nearly 14 years. Despite the extended hiatus, there remains a realistic opportunity for a rider to extend a win streak at the venue considering that Mission SuperTwins presented by S&S Cycle championship contender Jared Mees (No. 9 Indian Motorcycle/Progressive Insurance FTR750) was the victor when the Grand National Championship last raced in Joliet back in 2007.

Last Saturday’s rainout in Fort Worth provided only limited intel, but in the two Mission SuperTwins sessions that were completed, Mees was firmly back amongst the frontrunners after a knee injury severely hampered his ability to compete in Atlanta. The multi-time series king will arrive at the Chicago Half-Mile another week removed from his training accident and more closely resembling the Jared Mees the world saw dominate the season’s most recent Half-Mile Main Event at Volusia Speedway Park back in March.

Double defending Grand National Champion Briar Bauman (No. 1 Indian Motorcycle/Progressive Insurance FTR750) was even faster than Mees at Texas Motor Speedway, topping both sessions in the abbreviated event. It’s no secret that Bauman is champing at the bit as he looks to return to the top of the podium as soon as humanly possible. While he’s strung together three seconds, three thirds, and two fourths in his last eight races, he’s uncharacteristically gone winless over that stretch.

In Bauman’s defense, he was busy (successfully) defending a points lead late last season and did exactly what he needed to in order to win his second consecutive Mission SuperTwins crown. But now he likely needs to start putting together some wins in his effort to push for a third.

Over the past season and change, Sammy Halbert (No. 69 Coolbeth-Nila Racing Indian FTR750) has reestablished himself as a week-in, week-out contender, which means he’ll merit watching again in Joliet. Meanwhile, points leader JD Beach (No. 95 Estenson Racing Yamaha MT-07 DT) is attempting to do precisely the same thing, and his efforts will continue to be closely tracked as well.

Even with just three rounds in the books, the 2021 AFT Singles season has already taken shape in fan-pleasing fashion with big names Shayna Texter-Bauman (No. 52 Red Bull KTM Factory Racing 450 SX-FFE) and Dallas Daniels (No. 1 Estenson Racing Yamaha YZ450F) splitting the wins and locking down two of the top three spots in the early-season championship rankings.

Mikey Rush (No. 15 Estenson Racing Yamaha YZ450F) trails only teammate Daniels in the points and stands as the only rider in the class to land on the box at every race this season. 2020 championship runner-up Max Whale (No. 18 Red Bull KTM Factory Racing 450 SX-FFE) has translated his late 2020 flurry into a strong 2021 opening, having finished fourth or better in six of his last seven races. And the decorated and determined Henry Wiles (No. 17 American Honda/Progressive Insurance CRF450R) seems primed to explode with a huge weekend at any moment.

There’s also the banner class of rookies and sophomore riders who will be looking to knock the aforementioned AFT Singles stalwarts a few pegs down the order whenever possible.

AFT Production Twins presented by Vance & Hines points leader Cory Texter (No. 65 G&G Racing/Roof Systems Yamaha MT-07) is among the few riders who’ve been around long enough to have raced at the Dirt Oval at Route 66 Speedway when Progressive AFT last visited the venue in 2007.

After so many years, it seems doubtful that prior experience will provide much of an upper hand this weekend. However, what could are his trademark consistency of performance and his ability to continually improve as the day goes on. Texter has been on the podium 18 times since the start of his championship-winning season in 2019 and that sort of continual excellence makes him a serious threat to reclaim the title in 2021.

To do so, however, he’ll have to fend off a trio of ex premier-class runners in Chad Cose (No. 49 Voodoo Ranger/Roof Systems Harley-Davidson XG750R), Dan Bromley (No. 62 Memphis Shades/Vinson Construction Yamaha MT-07), and Dalton Gauthier (No. 79 D&D Cycles/Vance & Hines Harley-Davidson XG750R) who are currently breathing down his neck in the championship standings.

The Chicago Half-Mile also represents the 2021 premiere of Royal Enfield’s extremely popular BUILD. TRAIN. RACE. program, which serves to highlight and celebrate women and motorcycle culture. Phase I saw the competitors each build their own custom Royal Enfield INT 650 Twin flat track racers. Phase II then saw them hone their flat track skills in  training programs guided under the watchful eye of expert racers. And now it’s time for Phase III -- the races.

Spectator safety remains the top priority and Progressive AFT has worked closely with local health and government officials toward those ends. For more on the specific precautions being undertaken, please consult the Progressive AFT Events Health & Safety FAQ.

The Chicago Half-Mile will air on NBCSN on Sunday, June 6, starting at 5:00 p.m. ET/2:00 p.m. PT. The broadcast will include exclusive features, cutting-edge aerial drone and onboard footage, and expert commentary.