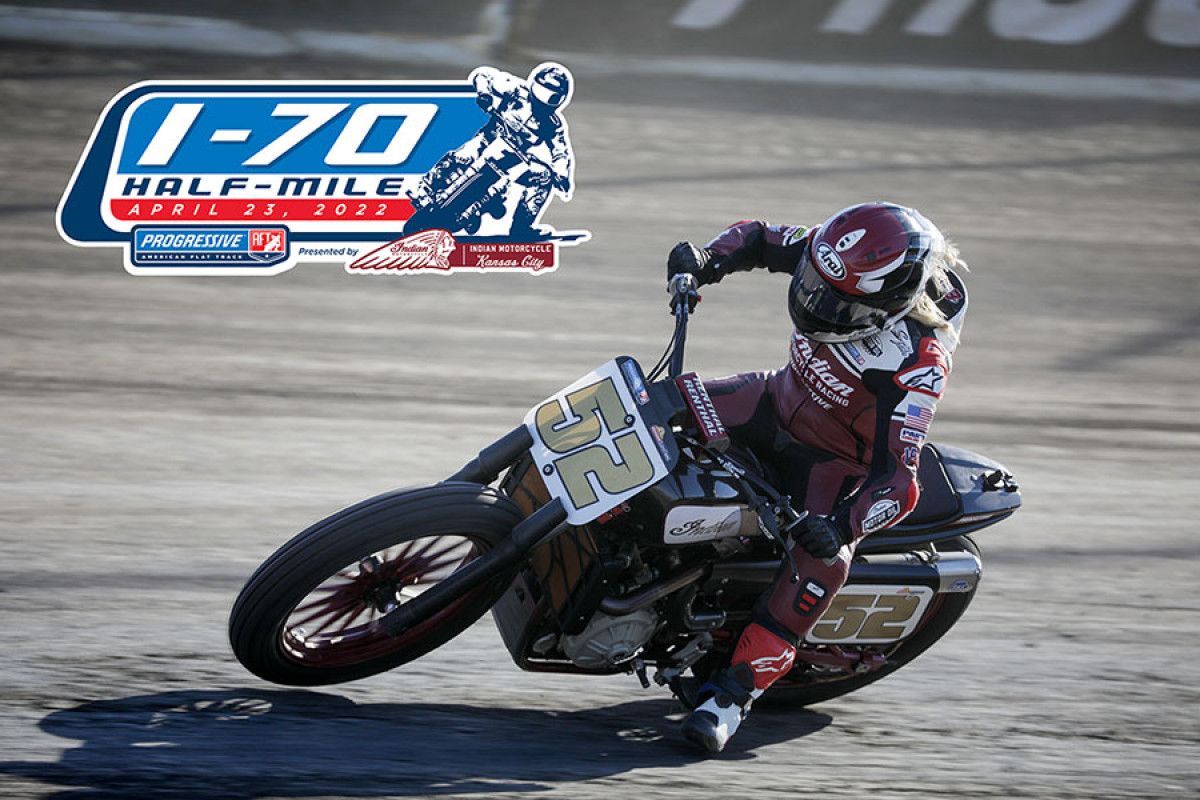 The stop at the newly revived I-70 Motorsports Park represents Progressive AFT’s long-awaited return to Missouri, some 17 seasons after the championship last visited Sedalia. To celebrate that return, along with Saturday’s championship round, Kansas City-area fans are invited to come out to the venue on Friday, April 22 from 3:00 p.m. until 8:00 p.m. local time to attend the day’s test session free of admission.

The young ‘22 season has already taken on an interesting shape. It was widely expected that the premier Mission SuperTwins presented by S&S Cycle class would once again be a battle for supremacy waged by reigning champion Jared Mees (No. 1 Indian Motorcycle/Progressive Insurance FTR750) and his great rival, Briar Bauman (No. 3 Indian Motorcycle/Progressive Insurance FTR750).

That has proven true to an extent, as the Indian Wrecking Crew superstars have split the season’s two available wins and are currently separated by a single point atop the championship standings.

However, the efforts to level the playing field have yielded early dividends, as five different riders out of a possible six, representing three different manufacturers, have stood upon the podium already in 2022.

That sort of parity and unpredictability has added an extra dimension to the season’s title fight, and promises to continue this weekend on a track new to the tour.

Defending Mission Production Twins presented by Vance & Hines king Cory Texter (No. 1 G&G Racing/Yamaha Racing Yamaha MT-07) rebounded like a champion at the Texas Half-Mile following a difficult opener. Despite tricky conditions and a series of stoppages, Texter controlled the Main Event at Texas Motor Speedway to remind everyone exactly why he’s the one brandishing the #1 plate on his machine.

That said, Nick Armstrong (No. 60 Competitive Racing Frames/Lessley Brothers Yamaha MT-07) provided evidence that his virtuoso performance at the opening round was no fluke, logging a fourth-place result as an encore. That result puts him in front of the early-season championship chase heading into Odessa.

Some others have yet to break into the top three, but it’s likely only a matter of time before the likes of multi-race winners Chad Cose (No. 49 DPC Racing/Voodoo Ranger Harley-Davidson XG750R), Johnny Lewis (No. 10 Moto Anatomy X Powered by Royal Enfield 650), and Ryan Varnes (No. 68 Schaeffer’s Motorsports/Rausch Fuel & Oil KTM 890 Duke) make their presences felt in a major way.

Top honors Parts Unlimited AFT Singles presented by KICKER are seemingly always up for grabs, as the class features a deep pool of both hard-charging youngsters and battle-proven veterans aboard a range of equipment backed with factory support from multiple manufacturers.

However, while the list of potential winners extends into the double digits, an early pecking order headlined by the preseason favorites is already starting to take shape.

While those four expect to continue to jockey for position as the championship campaign develops, a number of others could easily work their way into the mix as well.

Trent Lowe (No. 48 Mission Foods/Al Lamb’s Dallas Honda CRF450R), Michael Inderbitzin (No. 54 1st Impressions Services of Florida Honda CRF450R), Chase Saathoff (No. 106 American Honda/Progressive Insurance CRF450R), Trevor Brunner (No. 21 Estenson Racing Yamaha YZ450F), and Brandon Kitchen (No. 80 Vance & Hines/Husqvarna Motorcycles Husqvarna FC450), among several others, all have the requisite speed and ability to walk away from I-70 Motorsports Park with the winner’s trophy.

There will be plenty to keep fans entertained off the track as well. Along with numerous vendors, food and beverage options, and the Kids Zone, the high-energy three-piece group Pompous Jack, will be performing their blend of ‘80s rock, blues, and country. And the night will conclude in fitting fashion thanks to a post-event fireworks display.

Along with the action at the track on Saturday night and the free test day on Friday, fans are invited to attend the I-70 Half-Mile American Flat Track Rider Meet & Greet at RideNow Kansas City in Olathe, Kansas, where fans can meet their favorite riders and enjoy Mission Foods chips and salsa, on Thursday, April 21, from 5:00 p.m. to 6:00 p.m. local time.

Visit https://store.americanflattrack.com/ebooking/ticket/view/id/3775 to purchase your tickets for the I-70 Half-Mile presented by Indian Motorcycle Kansas City now.

General Admission Grandstand tickets are just $40 and kids 12 and under are free when accompanied by an adult. Fans who would like seating along the front stretch of the racetrack, including seat-backs in all sections, can select seats in the Reserved Grandstand for just $10 more. The Indoor Suite Reservation ticket provides exclusive viewing above the grandstand in private, climate-controlled accommodations for $150.

Paddock Access Upgrades are available for purchase (and come included with Indoor Suite Reservation tickets), which provide all-day access to the pits where fans can scope out the racebikes and get up close and personal with the stars of the sport.

Other options include the Party Deck Add-On for fans 21+ and a range of Multi-Day Camping Passes.

The I-70 Half-Mile will premiere on FS1 on Sunday, May 1, at 10:00 a.m. ET/7:00 a.m. PT., including exclusive features, cutting-edge aerial drone and onboard footage, and expert commentary.