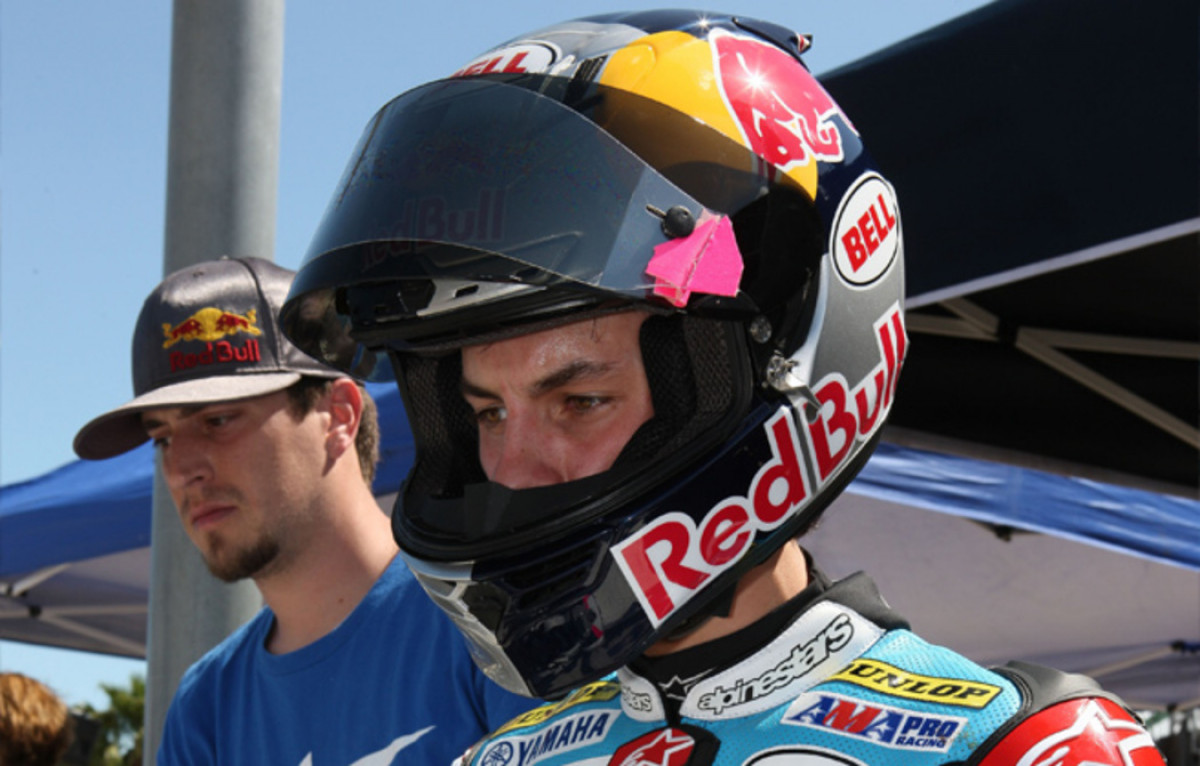 Hey everyone! Sorry for the slow update. For one, I could not figure out how to write it and keep it kinda short. We had such a long trip, I could have written a book with everything we did. While I was gone, I tried doing a day-by-day update, because we just about raced everyday, but that became way to long before we got to the end of the trip. Also by the time we got back I was just plum wore out and wasn’t really feeling like writing anything.

The trip basically started when we left to go test in Colorado for a few days then had an overnight flight back to OWB for the day to pack and head off to Georgia and Florida to do some racing. The test went well and I was looking forward to getting on the bike on the High Banks of Daytona, but before I could do that we had some Dirt Track racing to do. I was excited about that because James Hart had built a new Kawasaki 650 for me to race, my old bike went to Briar Bauman my new teammate for this year on the USC Kawasaki team. The bike was great when we got to ride it on the practice night, it was working really well and it was just fun to ride the big twin again. But that’s all we got to do was practice because of weather our races got rained out.

A few days later we went to Neese, SC to a nice Short Track to do some testing before Daytona to help get the 2012 Kawasaki 450 ready for action. It was really cool to have Briar there to bounce off ideas to each other and try them to help each other go faster. By the end of the test we both dropped a bunch of time and were going really well. After the test we had a few days before the circus started at Daytona, so we stayed in Deland, FL with a friend of James Harts’ in some really cool apartments. We were able to just relax work on bikes and just hang out. We even got taken out on the St. Johns River with a real local that grew up on the river. We got to see a lot of stuff that we probably wouldn’t have it we went on a paid tour.

After a couple of days it was time to roll on down to Daytona to start all the AMA Pro Racing events, I was ready to start the season. It seems like it has been a long winter so it was nice to finally be back at the track. As most of you know I did both the Flat Track and Road Racing, it made it very difficult to focus on one thing. I had to run back and forth riding different bikes, different terrain, with different people, and all in little time. I was able to make both mains in the dirt track and even be fast qualifier on the second night, but just couldn’t get the results I wanted. It was kinda hard to push as hard as I wanted to, because I didn’t want something stupid to happen before the 200 on Saturday. I really feel like we had the bike to run up front. James and I were just really happy to make both mains because it is Daytona anything can happen.

Once all the Flat Track was over, we raced the Daytona 200 on Saturday. By now I was a tid bit tired. I would be up close to midnight with Dirt Track then back up at 6:30 for the Road Racing. I still felt like once I got on the bike I would be able to go because I wouldn’t feel anything but be ready for racing. We ended up a step behind all weekend. Saturday morning warm up I was second fastest and went way faster than my qualifying time and I knew I could run those times but it was a little too late. Come race time I had a bit of a plan and it was going pretty well until I made a big mistake after our first pit
stop. I was racing with Jake Zemke, Jake Gagne, and Tommy Hayden, but miscalculated my braking going into turn one and blew the turn. I lost the draft from them and just couldn’t make up the time. After our second pit stop, the people in front of me were like +30 the people behind where like +45 so it was a BORING race. I was going around the banking just looking around, trying different ways to tuck, just anything to keep my mind going. I’m not sure if you have ever done 25 laps around Daytona on the Long Course by yourself but it can be a long time to be alone.

After the race we had a couple days to rest again before we started our test in Homestead. The only thing I gained from the test was figuring out which way the track went. By now I was wore out and couldn’t go any faster. I couldn’t figure out why, I hit a big wall. I was slamming my head against the wall trying to figure it out and when I couldn’t I would just get a faster running start and hit it even harder. By the end of the test something finally clicked and I was starting to go faster but then ran out of time. It
was nice to end on a good note but I was still bummed I couldn’t go any faster.

Once the test was over Jon, Hayden, and I got in my van and started our 18 hour drive home. We were going to wait until the next morning to leave but we were all ready to get home. Jon and I traded off driving the whole way and made it home by about 9:30am the next morning. Since I have been home, I have really been able to get back on a good program and I have really been able to enjoy myself and just have fun. Getting out on my Specialized bicycle and just riding in the beautiful weather we have been having. I also bought a Kawasaki 450 so I could ride motocross.

Next up is Road Atlanta in a few weeks. I really love that track and I feel like I will be re-energized once we get there.