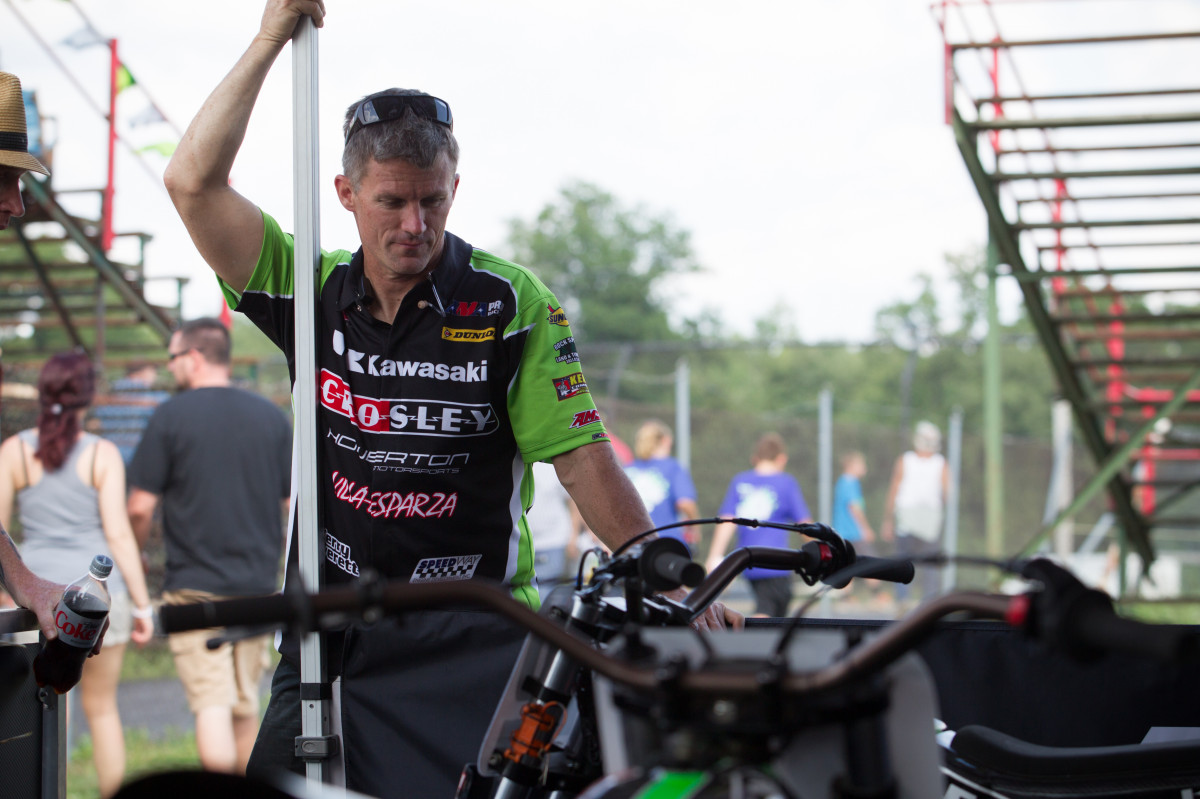 Ricky Howerton has functioned as an agent of change throughout his tenure in American Flat Track racing. Drawing on the insight first gained while earning a mechanical engineering degree and honed while in pursuit of ever greater speed in IndyCar and NASCAR, Howerton has continually proven a disruptive force when applying his unique perspective to the two-world realm.

With Bryan Smith at the controls, his remarkably compact and technically impressive Kawasaki-powered flat tracker shifted the balance of power right from its introduction in 2012. That pairing culminated in the 2016 Grand National Championship, which successfully took down the Harley-Davidson juggernaut and its two+ decade unbroken string of championships.

Howerton and Smith were signed up by Indian Motorcycle on the heels of that achievement to spearhead its upstart factory effort in an attempt to redesign the dirt track world order in Indian’s image. The ripples of that decision continue to reverberate throughout the paddock as the FTR750 is now established as the sport’s dominant package to the point that it’s not just a threat to lockout the podium, but capable of sweeping the top nine in any given Main Event as it did at last year’s New York Short Track.

In a complete reversal from when he first joined the series, Howerton’s giant-killer mentality has now put him in perfect alignment with the ambitions of Harley-Davidson.

In just a few short years, H-D has been rendered the underdog despite the fact that it boasts greater than 100 premier class wins above all other manufacturers combined. Following three consecutive seasons of outright Indian domination, the championship’s original purveyor of the status quo is anxious to reshuffle the deck.

With that goal in mind, Harley-Davidson and Vance & Hines announced a splashy 2020 AFT SuperTwins program last week. Howerton will serve as crew chief to guide the development of the XG750R and oversee a superstar package of three riders featuring Smith, holdover Jarod Vanderkooi, and reigning AFT Singles champ Dalton Gauthier.

Ironically, it marks a second chance for Howerton to essentially create his own modern take on Honda’s factory flat track powerhouse of the 1980s.

“The Indian deal was great for me,” he said. “For them to want me to run their program was really a dream come true. It reminded me of spending time around the factory Honda guys back in the day when they were next door to our shop. I just dreamed as a kid... ‘Wouldn't that be cool? Gene Romero as team manager and he's got Skip (Eaken) and Sparky (Edmonston) as mechanics and Bubba (Shobert) and Ricky (Graham)...’ So when that kind of came full circle, I almost had to pinch myself. 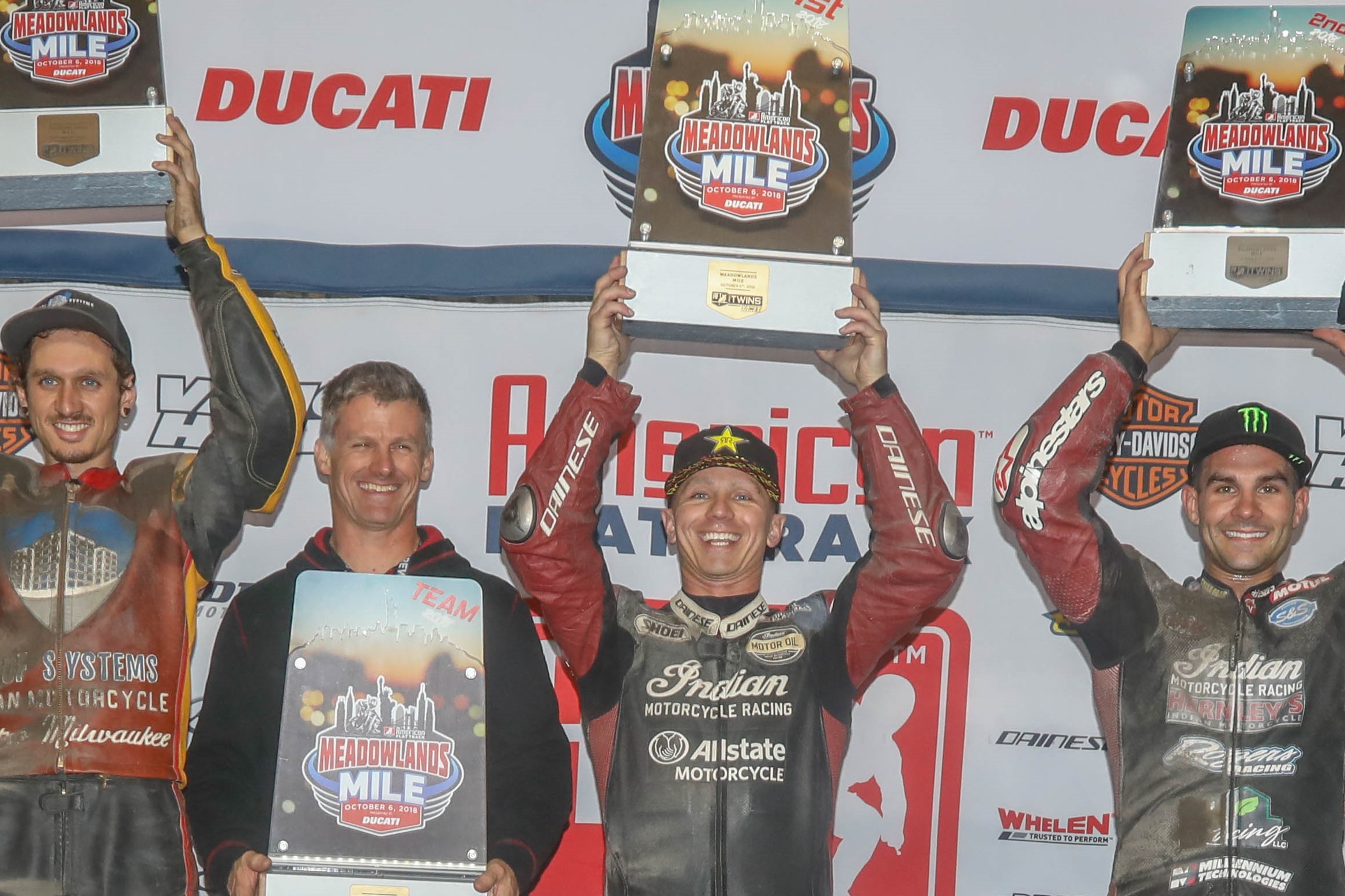 “But then the more we got into it, you know, Jared (Mees) had the ability to get outside money to do more development on engine stuff and whatever.

“Gary Gray (Vice President – Racing, Technology & Service for Indian Motorcycle) was really good, and he actually would let us do whatever we wanted. But there wasn't enough funding to really do that. The more that we went into that program, the more it felt like we were stuck. And I don't really like just pushing a motorcycle around at the racetrack; I like being able to develop it and try to get better.

“So we went back to Kawasaki.” 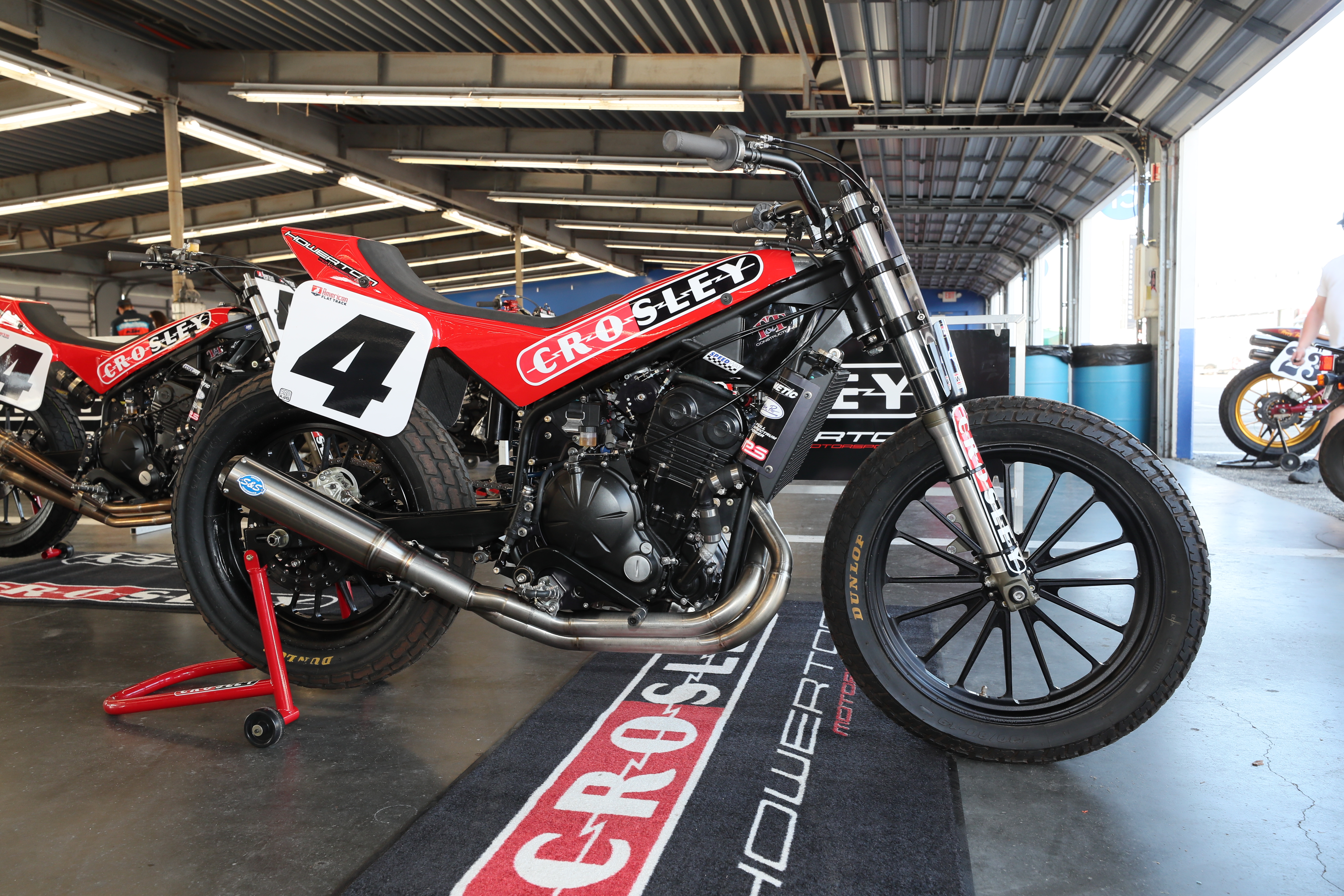 Last season, Howerton and Smith attempted to slay the dragon they helped raise with an updated version of the Kawasaki-powered machine that took the ‘16 Grand National Championship in a reanimated Crosley-Howerton Motorsports effort.

They ultimate fell far short of that goal -- sitting out for a spell to focus on the motorcycle’s development and ending up outside the championship top ten -- but still managed to remind the field of their potential with two runner-up finishes to close out the season.

He said, “It took us a while to get our (stuff) together this past year, obviously. It wasn't due to us starting off worse than where we were in '16. Everyone asks what happened -- 'you ended '16 so strong only to come out to be behind the eight ball...’

“That made us get smarter and figure out, okay, the chassis is actually better than the '16 bike -- we just don't have the right power curve. It just took us a while to get there.” 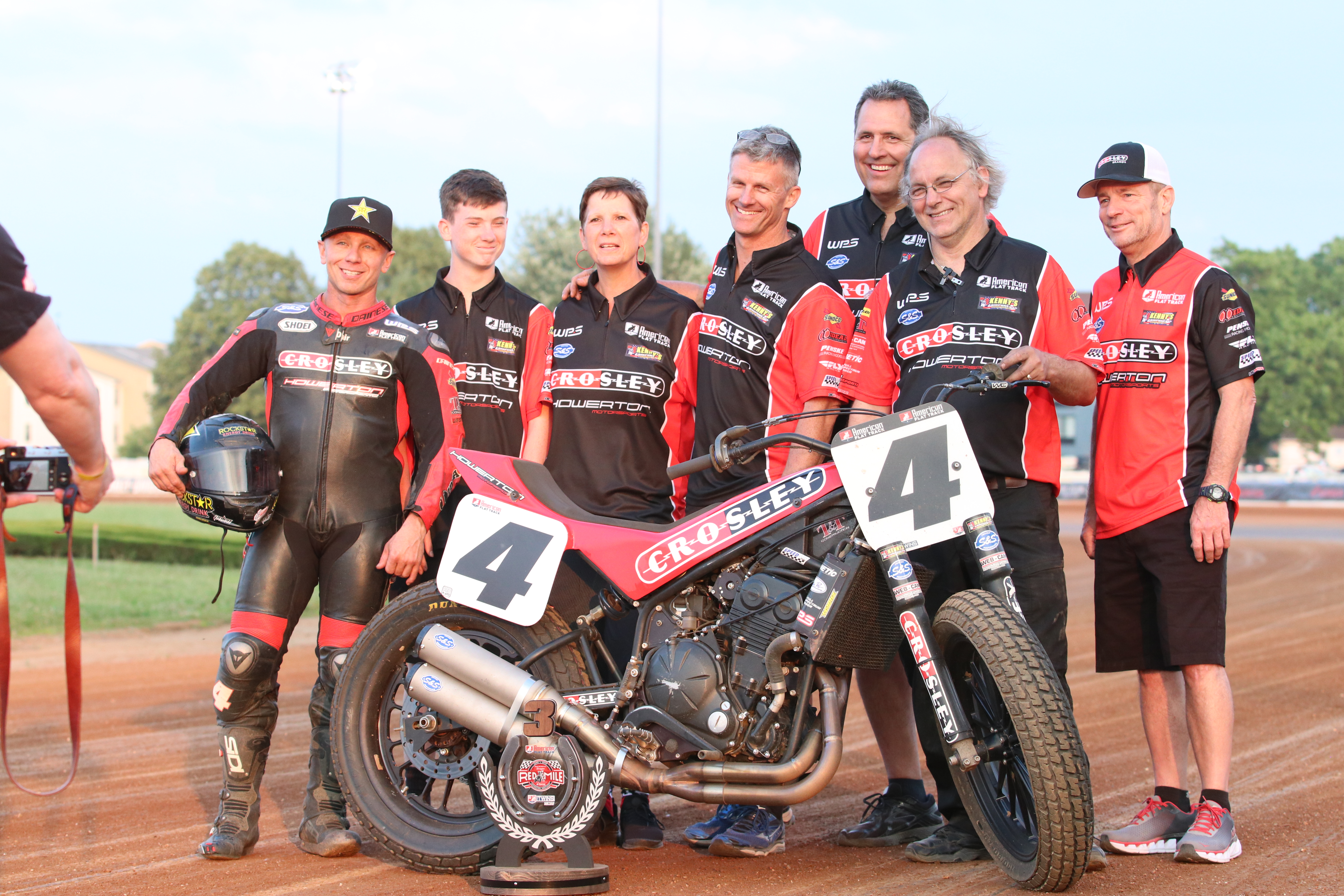 Despite shutting the resurrected program back down following just one season, those lessons will be directly applicable in 2020, and Howerton and Smith could see it coming at the time.

“Probably halfway through the year Bryan and I talked a little bit, and for me personally, I was pretty burnt-out. I had been working probably 40 weeks at 100+ hours a week, and I really couldn't see much end in sight. It's not a team where I've got full-time guys and all that.”

So Howerton circled back to Vance & Hines and Harley-Davidson, who had first discussed the idea of handing him the reins to the sport’s most decorated team a few seasons back. Now, the timing and situation were right.

“This is pretty much everything you could want in a factory program. On the good side, they're letting us do pretty much whatever we want to do, whether it's engine or chassis stuff. On the bad side, if we don't perform, it's all my fault!”

While it’s natural to assume there would be a neat and tidy separation of duties with Howerton tasked with redesigning the XG’s chassis and Vance & Hines left in charge of engine development, those aforementioned lessons from 2019 mean that’s not actually the reality in the shop.

Howerton said, “To be honest, we watched that team for three years, and Bryan and I talked a lot about it. Once we started thinking about that direction, we talked to Terry (Vance) and looked closely at their engine program -- the power curve and stuff.

“The motorcycles are plenty capable of winning right now. The suspension is fine, the frame and chassis are fine. They've just got too much damn power in places you can't use it.

“Don't get me wrong -- Byron Hines is still a legendary engine guy. In the first meeting we had, I said, 'Byron I've got to be honest, this is kind of odd that you're asking me for engine advice.’ I'm not necessarily an engine guy, but I've paid a lot of attention and we know what power curves we need to be successful. Still, it was almost a little uncomfortable for me to be telling him that. He just laughed and said, 'Hey, we need your help…’”

“We've already had one test around the Charlotte area, and it went super good. All three of the riders were really happy with the direction of the motorcycle. We've already made some big gains in getting grip.”

The fact of the matter is, with so many talented riders armed with FTR750s in the AFT SuperTwins field, the updated XG750R can’t merely reduce the gap, it needs to be as good or better than the competition in order to realistically fight for race wins and the championship.

“It's almost like car racing,” Howerton said. “Whether or not it's IndyCar or NASCAR, if a manufacturer has 30 out of the 35 cars in the field, they are getting gobs more development time and data. (Indian) started off with a great package, and it's just gotten a little bit better. It's good enough that we're going to have to our homework to chase those guys down.

“I think we can do it. Honestly, I think the Harley engine package -- there's a few components on that thing that are going to put us in a better position than the Kawasaki did. I think it actually has more potential.”

Of course, the riders will have their say, and Harley’s 2020 team offers up an abundance of firepower in that regard.

“It's a really good variety of guys. Obviously, everyone knows Bryan is super good on the Miles and super smart. He's a really good guy to develop the motorcycle. I think that is hugely important.

“On the other end of the spectrum, you've got Dalton. He's a great kid -- he's quiet but he's super nice and he's just a badass on the motorcycle. He kinda reminds me of James Stewart when he was coming up in motocross. He's got so much raw ability. It's gonna be up to us to give him something he can just ride the (snot) out of. I think he can win right out of the gate.

“Jarod is kind of halfway in between. He actually rode for me on the Indian deal at Perris that last race when Brad (Baker) got hurt in '17. He's a good kid. He gets an A+ for sheer effort. No matter how good or how bad the motorcycle is, he's riding 110%. He just gives it everything every race, every lap, every corner.

“I think everyone will benefit from the presence of the others. They all have a lot of different assets. It's pretty cool because we don't just have three Mile guys or three TT guys -- we've got a good combination. I'm pretty stoked.”

With the team officially announced and the first test in the books, what’s next?

“More testing,” Howerton said. “We're going to test again a couple times in the next week-and-a-half. I think the biggest thing is trying to get our 3/8-Mile/Half Mile package solidified. We're getting that narrowed down. We've got a really good torque curve. And then TT stuff. We're kind of working on that now.

“And being that the Mile is a little ways out, we'll work on that as well. But I think as far as the Mile goes, that's probably where the Harley was best. It's got the ability to make a lot of power, so I think it'll be easier for us to get a good package there than the other ones, but we've got some great testing in already. I'm excited for Daytona.” 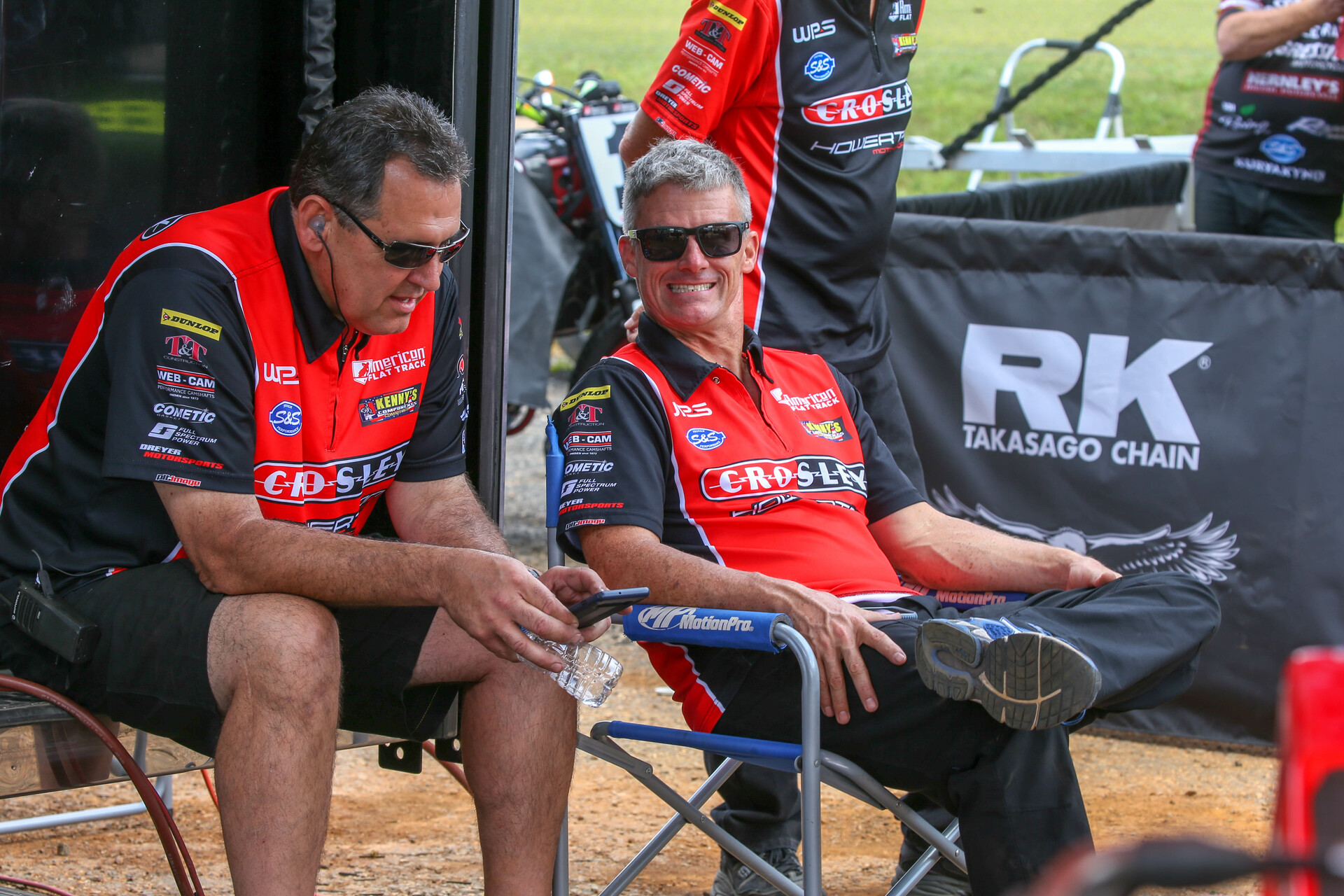