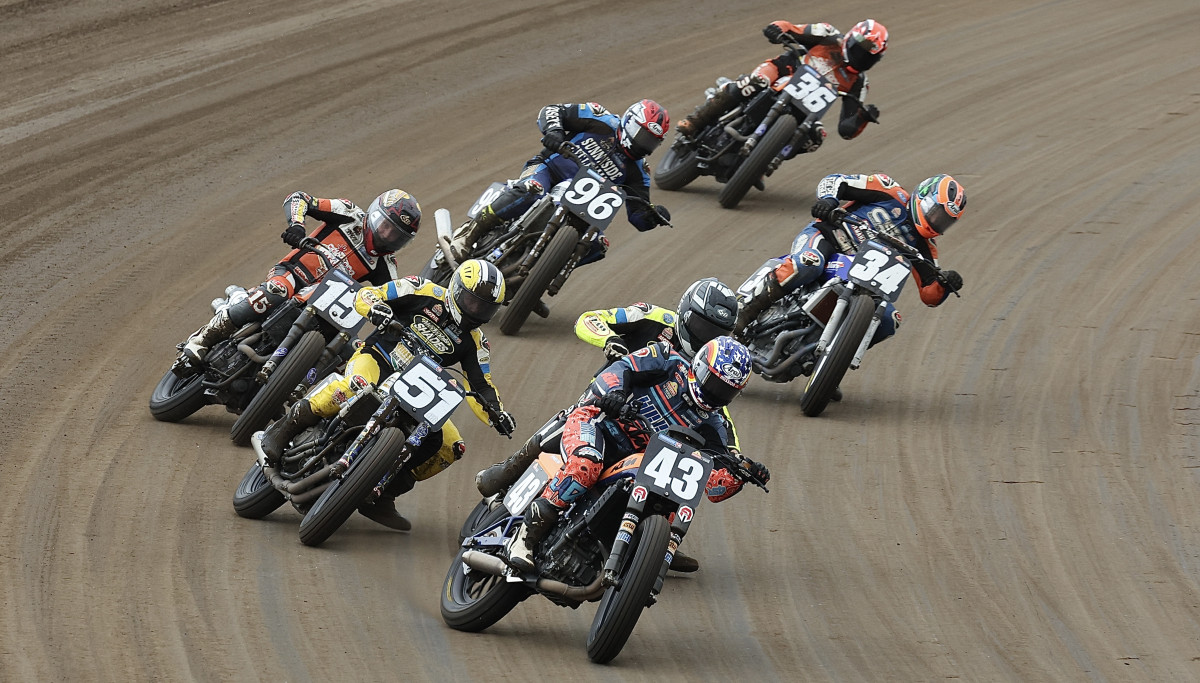 Shortly after the completion of the first of three scheduled Main Events, a late afternoon rain shower brought Saturday’s activities to an early conclusion as the day’s Mission SuperTwins presented by S&S Cycle and Parts Unlimited AFT Singles presented by KICKER were delayed until Sunday afternoon (see below for complete details).

While that would normally open the door for defending champion Cory Texter (No. 1 G&G Racing/Yamaha Racing Yamaha MT-07) to blast through, Texter had his own problems on the day, uncharacteristically searching for pace after only narrowly advancing to the Main through his Semi.

Instead, Saturday’s spotlight initially shone down on ‘22 part-timers Michael Rush (No. 15 Helipower Racing/Las Vegas Harley-Davidson XG750R) and James Rispoli (No. 43 Wally Brown Racing/Haversack KTM 890 Duke). In fact, Janisch later admitted he was merely attempting to slow the two down before breaking and bringing out the red flag.

After dominating their respective Semis, Rush and Rispoli went bar-to-bar when racing resumed. After breaking the draft to sever the tenuous tie connecting them to a big ten-rider pack in pursuit, they went about trading first and second back and forth repeatedly.

With less than a minute remaining on the clock – and moments after Bromley and Zabala powered by on either side of Rush to move into second and third, respectively – a second red flag was shown following a Michael Hill (No. 47 Pacific Auto Trim/Jim Speer Yamaha MT-07) crash, reshuffling the deck one last time.

Rush’s bike then overheated during the stoppage and was therefore forced to line up at the back of the pack (along with Johnny Lewis (No. 10 Moto Anatomy X Powered by Royal Enfield 650), who also did repair work during the break).

Rispoli took the holeshot but was unable to shake the field this time around, even losing the lead to Zabala momentarily as they opened the final lap. He quickly countered, however, and proceeded to narrowly hold on for the win, edging Bromley and Zabala at the line by 0.096 and 0.145 seconds.

After earning his second win of a limited season, Rispoli said, “When the red flag came out, I knew it would put these guys back in the game, and I was like, ‘Man, we’ll be off the podium if we do this wrong.’ So I tried to put my head down.

“Wally Brown Racing has made so many updates to the motorcycle and we’re continuing to get better and better.”

Rush was impressive in climbing all the way back up to fourth despite the limited time he had to pull off the charge. He was followed by Cody Johncox (No. 96 Sunnyside Cycle/Hyperdog Yamaha MT-07), Cameron Smith (No. 34 Thee Cathy Gray/Al Barker Yamaha MT-07), and Kolby Carlile (No. 36 KC36 Las Vegas Harley-Davidson XG750R) with the top seven riders covered by just 0.450 seconds at the flag.

Texter, meanwhile, finished ninth. As Janisch was credited with 16th, Texter managed to reduce the gap marginally, closing from 24 to 17 points (267-250) ahead of tomorrow’s rematch.

The Mission Springfield Mile II presented by Drag Specialties scheduled for tomorrow, Sunday, September 4, will run as a condensed program. Gates are scheduled to open for fans at 9:00 a.m., track activity commencing at 10:00 a.m. and Opening Ceremonies scheduled for 11:00 a.m. local time, followed by the Main Events for all three classes. The Parts Unlimited AFT Singles and Mission SuperTwins Main Events scheduled for Saturday, September 3, will run at the conclusion of the Sunday program. Fans must have a Springfield Mile II ticket to access the event. Visit https://store.americanflattrack.com/ebooking/ticket/view/id/3690 to reserve your tickets now.