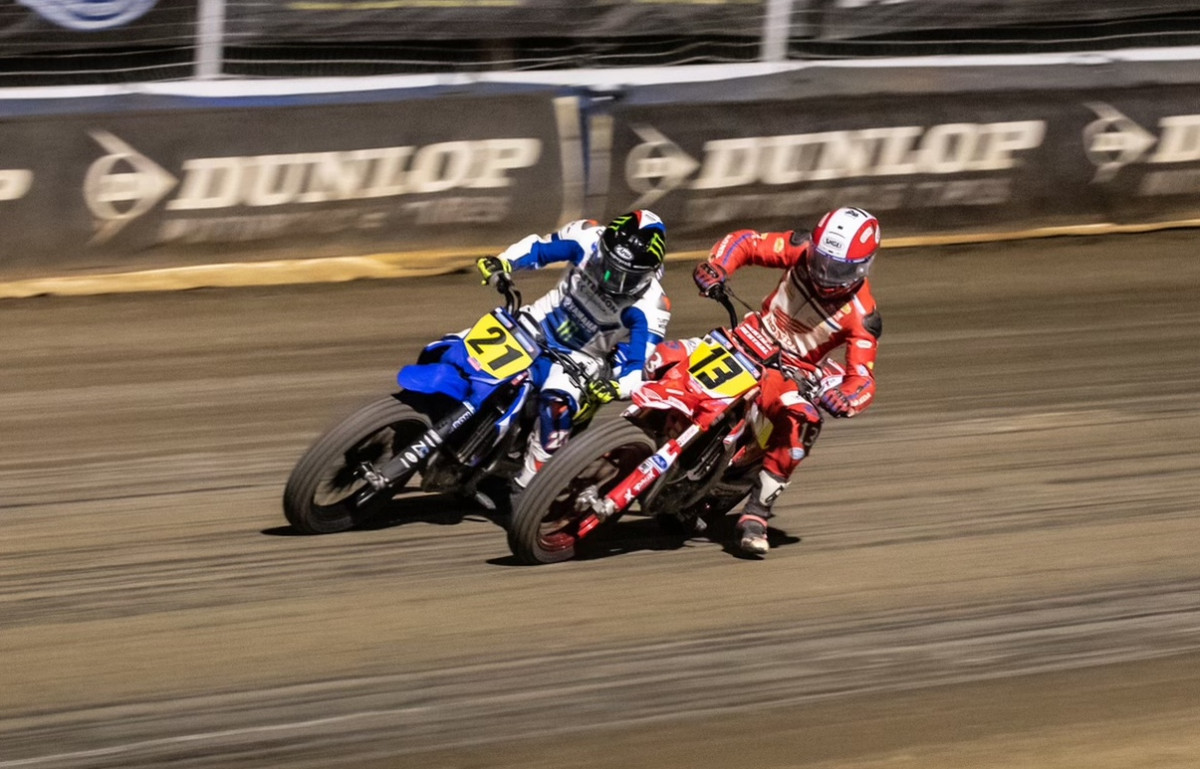 But even the world’s fastest riders were unable to outrace the rain, which brought the Mission SuperTwins presented by S&S Cycle Main Event to a conclusion just moments after it started.

The stage was set for what promised to be an intriguing final battle before the skies opened, forcing the race to be red flagged. Continued inclement weather ultimately led to the round to be called complete. By rule, with the Main Event’s starting positions decided but less than two laps completed, every rider on the grid was awarded one point and “Rain Pay” (which divides 50% of the posted purse equally among all riders who earned starting positions) for their day’s work.

While a frustrating end for everyone involved, the night was highlighted by a pair of thrilling support races headlined by two highly motivated race winners.

Those two had been widely expected to settle tonight’s winner between themselves, a notion seemingly confirmed when they battled back and forth at the front during the race’s opening stages.

Instead, Rush executed a quick charge up to third before slotting past Texter for second at mid-distance. He pulled the same trick on Janisch 30 seconds later and just as quickly left the two in his wake.

“I never doubted myself,” said an emotional Rush. “It’s been a rough road coming off the couch and getting back to what I love doing. These guys rode a hell of a race, and I knew we had our work cut out for us.

“Just a big shout out to my team. I couldn’t do it without the Helipower Racing/Las Vegas Harley-Davidson team. My crew works their tail off and it’s an honor to ride these bikes.”

Despite missing out on the win, it still proved to be a positive night for Texter when considering the bigger picture. Aided by an assist from Nick Armstrong (No. 60 Competitive Racing Frames/Lessley Brothers Yamaha MT-07), who knocked Janisch off the podium altogether with a last-gasp move to claim his first podium since April's I-70 Half-Mile, runner-up Texter managed to reduce Janisch’s title lead down from eleven points to six (214-208).

While it’s more than a little strong to call the result a disaster for Janisch, it was still a disappointment after he had managed to sweep the evening’s practice, qualifying, and Semi sessions – just as he had in his prior two victories – until finishing fourth in the Main.

Trevor Brunner (No. 21 Estenson Racing Yamaha YZ450F) finally brought an end to the season-long stranglehold of the top step on the podium by the combined efforts of the factory KTM and American Honda squads thanks to a tenacious performance in the night’s Parts Unlimited AFT Singles presented by KICKER Main Event.

Brunner seized the early lead and controlled the race’s opening half but still found himself in need of a late strike after earlier losing the position to an on-form Morgen Mischler (No. 13 American Honda/Progressive Insurance CRF450R).

In fact, for a time, second-ranked Mischler appeared well positioned to make huge inroads in what had become a hefty title deficit. The Wisconsin native darted past both Brunner and teammate Chase Saathoff (No. 106 American Honda/Progressive Insurance CRF450R) to take point and had a third win of the season in his sights while championship leader Kody Kopp (No. 12 Red Bull KTM Factory Racing 450 SX-FFE) languished down near the bottom of the top ten.

However, Brunner had other ideas, drawing back up on the rear of Mischler’s machine and ultimately diving underneath him to reclaim the lead with just ten seconds remaining on the clock. Brunner then cemented the win with a perfect execution of the final two laps to score his first victory since being drafted into the Estenson Racing Yamaha team at the start of the season to fill the seat left vacant due to the premier-class graduation of two-time Parts Unlimited AFT Singles champion Dallas Daniels.

Afterward, Brunner said, “After Mischler got by me, I just tried to stay cool, calm, and collected behind him. I tried to figure out what he was doing that was faster than what I was doing. I kind of figured that out and got close enough where it just became a matter of what I could do to pass him and where I could do it. Fortunately, I got under him entering one of the turns and never looked back.

“I can’t thank my whole team enough for all the support and all the hard work they’ve put in for me.”

Trent Lowe (No. 48 Mission Foods/Al Lamb’s Dallas Honda CRF450R) picked up his third podium finish of the season after out-dueling ‘19 class champ Dalton Gauthier (No. 79 American Honda/Progressive Insurance CRF450R) in their tussle for the final spot on the box.

Meanwhile, Mischler’s hopes to make major waves were further deflated after Saathoff encountered difficulties and lost several positions, including one to Kopp, who ultimately fought all the way back up to fifth at the checkered flag.

As a result, Kopp remains firmly in control of the title chase – even if he no longer seems quite as invincible as he did a few weeks back – leading Mischler by a still mammoth 44 points (234-190).

The Progressive Black Hills Half-Mile presented by Saddlemen will premiere on FS1 on Sunday, August 14, at 11:00 a.m. ET/8:00 a.m. PT, including exclusive features, cutting-edge aerial drone and onboard footage, and expert commentary.