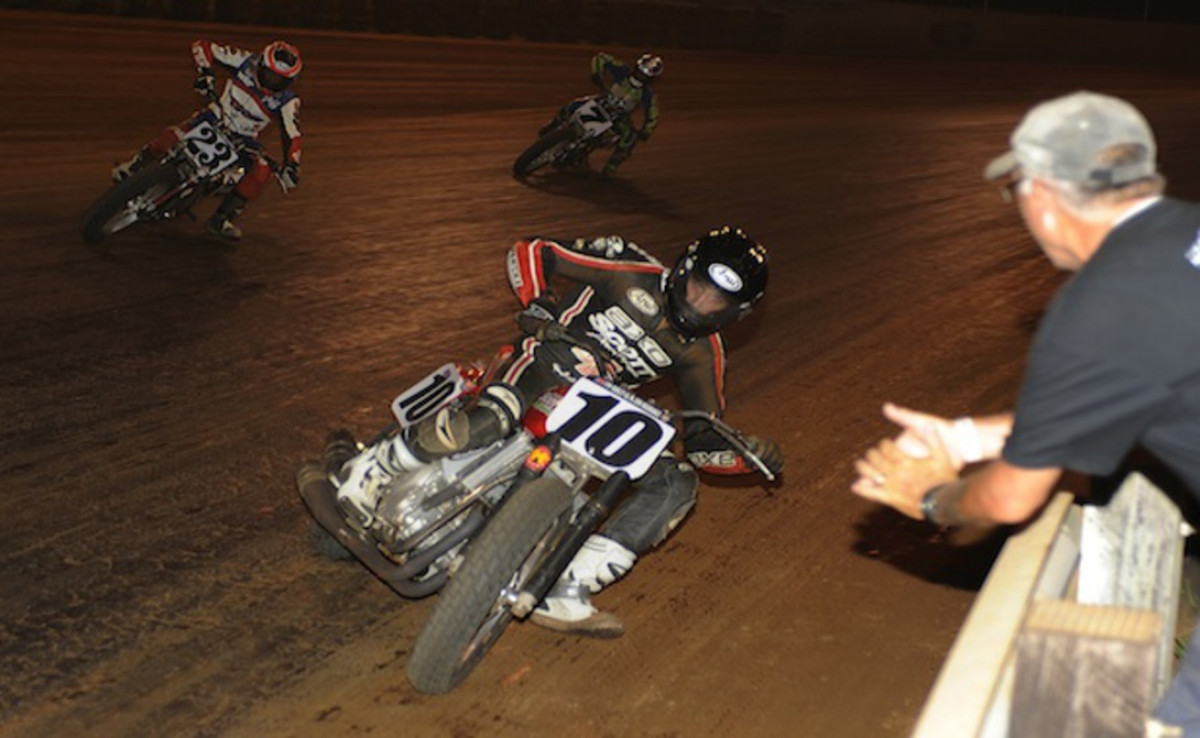 Released on behalf of MotoPR:

HAGERSTOWN, Md. (July 13, 2012) – In only his third full season competing in the AMA Pro Harley-Davidson Insurance Grand National Championship presented by Motorcycle-Superstore.com and Lucas Oil, Scott Powersports/Saddlemen’s Johnny Lewis is consistently running at and near the front. Since the opening round, he has finished in the top five four out of six events. During the recent Lima Half-Mile in Ohio and the Hagerstown Half-Mile in Maryland, Lewis finished fifth and fourth, respectively, on his custom-built Scott Powersports’ Kawasaki 650.

Lewis dedicated the Daytona Short Track opening round double-header to his friend and former KTM factory mechanic, the late Mark “Tex” Adams. Since then, Lewis has continued to dedicate his season in memory of Tex.

“This has been my strongest pro flat track season so far,” said Johnny Lewis who wears national number ten. “We have a consistent program with many of the same sponsors over the past three years. This year, Scott Powersports and Saddlemen have stepped up their support. We’re in our third year on our custom-built Kawasaki Ninja 650 flat tracker. Mike Scott and Tom Draina have been pivotal in making this a top five bike that can win. I also want to thank AXO and Dubach Racing Development (DRC) for supporting me for many years and making custom products for my race program.”

Lewis continued, “The Lima and Hagerstown half-mile races were fun and a challenge. I am more consistently leading laps and battling for podiums. The racing goals now are for continued improvement on the Kawasaki flat tracker, race line choice and to win an AMA Pro GNC Twins race.”

During the Lima Half-Mile on Saturday, June 30, Scott Powersports/Saddlemen’s Lewis rolled out his Kawasaki 650 to the line for the heat race. Lima is a cushion, pea gravel oval. In the first heat race, Lewis won away recording the quickest time of all three heat races. In the Dash for Cash, Lewis battled for the lead and at the checkers finished second.

In the 25-lap main event sitting on pole, Lewis in his custom AXO leathers and Arai helmet slingshot his Scott Powersports’ Kawasaki into the lead and continued to charge through the Lima track for the first five laps. In a turn, Lewis went low and got a little sideways in the thick pea gravel which allowed four riders to pass him immediately. He recovered and remained in the lead pack, within less than a second of the leader. Lewis continued to ride his fluid style and remain in the lead pack to the checkers, earning fifth.

During the Hagerstown Half-Mile on Saturday, July 7, Lewis on his Pit Posse and Penske Racing Shocks supported Kawasaki 650 he earned second in his heat race qualifying directly for the main event. Lewis went into the Dash for Cash determined to get more track time in preparation for the main event. He finished fifth in the Dash.

In the 25-lap Hagerstown Half-Mile, Lewis on his Silkolene-supported Kawasaki was among the lead top ten from the start. Realizing that he was not moving up an inch to gain on the lead pack, he changed lines to gain more speed. That allowed Lewis to win a three-way battle and move into fourth place at the finish line.

With six rounds of the 19-round AMA Pro Harley-Davidson Insurance Grand National Championship presented by Motorcycle-Superstore.com in the books, Lewis sits in third place with 97 points.

“I appreciate all the support of my sponsors. Unfortunately it’s still tough to make all the races. I won’t be heading to the next two rounds on the West Coast due to travel cost. I have some racing plans closer to home that will be announced early next week.”

The AMA Pro Harley-Davidson Insurance Grand National Championship presented by Motorcycle-Superstore.com has a short break before the next round, the Sacramento Mile on July 28. Lewis will not be traveling to Sacramento and the following race in Washington due to a limited race budget. Lewis and his Scott Powersports/DRD Honda CRF450R will make a return to flat track racing for round nine, the famed Peoria TT at PMC Race Park in Peoria, Illinois on Sunday, August 12. Keep up with Lewis on Facebook at www.facebook.com/lewis10 and his website at www.lewis10.com.