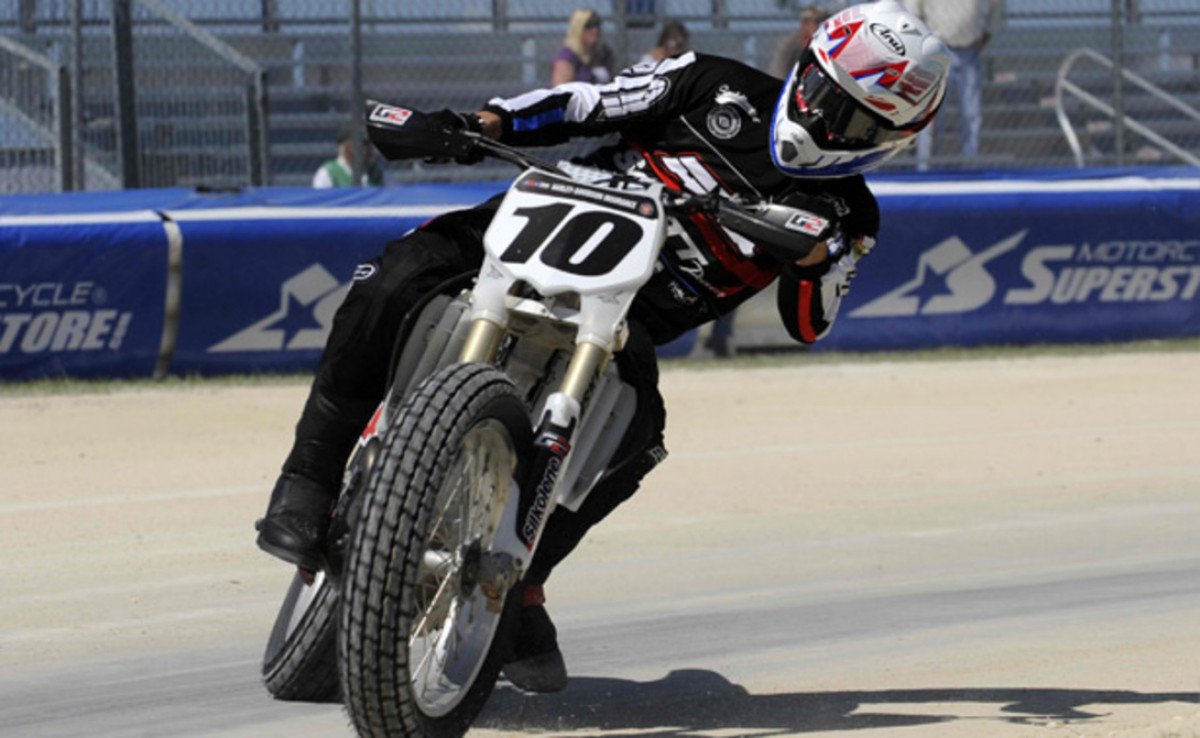 Release Courtesy of MotoPR, on behalf of Johnny Lewis:

SPRINGFIELD, Ill. (May 25, 2012) – Following this weekend’s AMA Pro Harley-Davidson Insurance Grand National Championship presented by Motorcycle-Superstore.com and Lucas Oil races at the Illinois State Fairgrounds, Scott Powersports’ Johnny Lewis will bring RIDE Academy to the AMA Dirt Track Grand Championships on May 29-31. Riders will be able to receive free coaching from Lewis and also register for giveaways courtesy of his sponsors.

Lewis is a former recipient of the AMA Horizon Award, which is the highest honor during the AMA Dirt Track Grand Championships. After that his career has spanned AMA Pro Flat Track and AMA Pro Supermoto with wins in both series.

Prior to RIDE Academy at the AMA Dirt Track Grand Championships, Lewis will take his Scott Powersports/DRD/Saddlemen #10 Honda CRF450R to the Springfield TT on Saturday, May 26. Lewis won the opening round of the AMA Pro GNC series and finished eighth at the second round after battling for the lead on the final lap.

On Sunday, May 27, Lewis will throw on his AXO leathers and saddle up on the custom #10 Scott Powersports/Saddlemen Kawasaki 650 flat track racer for the first time this season as he competes at the Springfield Mile. Lewis currently sits in third in the AMA Pro GNC series with 40 points.

Following the AMA Pro Harley-Davidson Insurance Expert races, Lewis will remain in Springfield for the AMA Dirt Track Grand Championships on May 29-31. Visit him at the AXO tent each day starting at 8 a.m. He will provide free instruction and encouragement to any and all riders, no matter their affiliation. The racers will have an opportunity to enter to win one of two gift certificates valued at $250 to apply to a RIDE Academy school date of their choice. There will also be giveaways from Lewis’ sponsors, including Metro Racing and Silkolene.

There is no cost to receive instruction from Lewis during the AMA Dirt Track Grand Championships.

RIDE Academy will hold schools on June 27-28 at Square Deal in Binghamton, New York and July 11-12 at Lucky Thumb in Deford, Michigan.

The AMA Pro Harley-Davidson Insurance Grand National Championship presented by Motorcycle-Superstore.com and Lucas Oil is back after its traditional long break following the Daytona Short Track races. Fans make your way to the Springfield TT on Saturday, May 26 and to the Springfield Mile on Sunday, May 27, which will be the first time series athletes compete on the bigger Twins machines. Both races will be at the Illinois State Fairgrounds in Springfield, Ill. Event information is available at www.amaproracing.com/ft. During the two Springfield races, stop by the Scott Powersports pit to meet Lewis and get an autographed poster. Then, watch him during the Springfield TT on his Scott Powersports/DRD/Saddlemen #10 Honda CRF450R in his AXO gear, Arai helmet and AXO Freedom Flat Track boots and on his Scott Powersports/Saddlemen custom Kawasaki 650 flat tracker in his custom AXO leathers during the Springfield Mile. Keep up with Lewis on Facebook at www.facebook.com/lewis10 and his website at www.lewis10.com.

About RIDE Academy
RIDE Academy is determined to change the world of flat track racing. We believe we have a formula that will lead many riders to success. We are here to extend our combined knowledge to fellow riders so that they can become the best they can be in a far less amount of time than it has taken each of the instructors. To reach excellence you must be determined and willing to have an open mind to take advice and instruction. We instruct on the importance of maintaining the right body position, utilizing control on your motorcycle and using proper techniques to ensure you will be the most successful motorcycle racer you can be. Register for a RIDE Academy school or find out more at www.rideacademy.com.