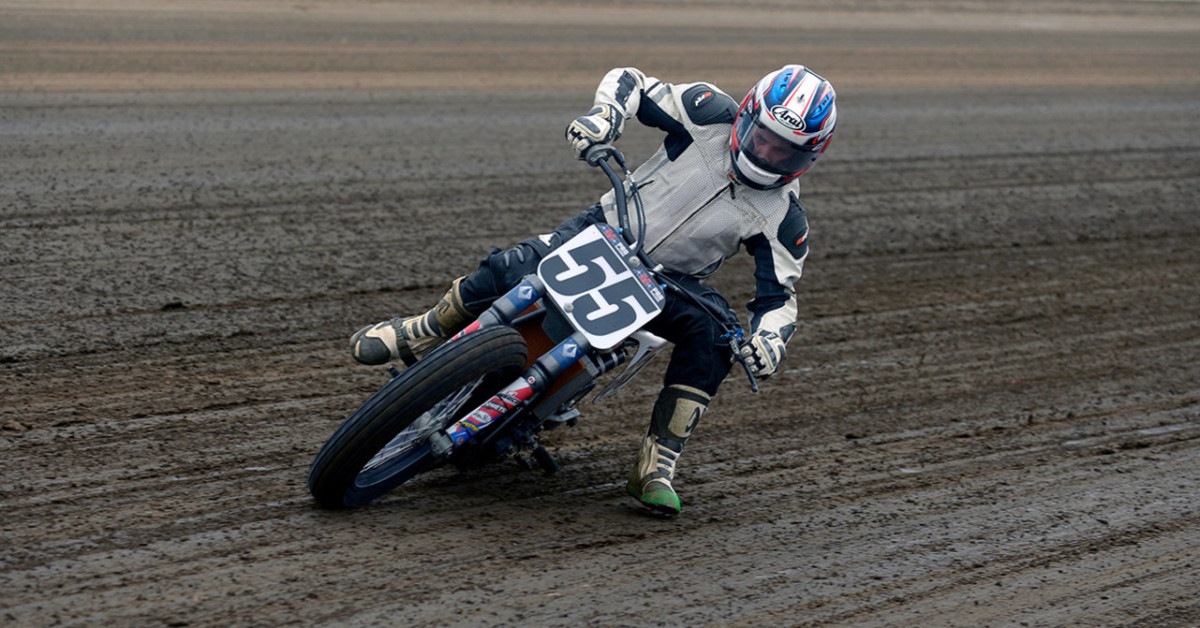 Akron, Ohio (May 1, 2015) – The 2015 AMA Pro Flat Track season brings a lot of changes for many riders in the series, including Harley-Davidson GNC1 presented by Vance & Hines competitor Jake Shoemaker, who made the jump from riding a privateer motorcycle in 2014 to competing aboard factory machinery this season. Shoemaker will ride the No. 55 Bonneville Performance/Castrol/Triumph in the upcoming Springfield Mile, slated for May 24.

Shoemaker spent several days testing with his new team at several tracks prior to the start of the 2015 season.

“The biggest adjustment I have had to make riding the Triumph so far is dealing with twice the amount of torque,” said Shoemaker. “There is just a ton of torque that I needed to alter my riding style to but after a few laps I was able to get a lot more aggressive.”

Bonneville Performance/Castrol/Triumph is looking forward to one of their best seasons to date, and the decision to bring Shoemaker on as the team’s rider had much to do with his aggressive, hard charging riding style.

Team owner, Bill Gately, feels that his new rider is the ideal fit for what Bonneville Performance/Castrol/Triumph is trying to accomplish in 2015.
“Not only is Jake one of the hardest working riders in the paddock, but he is able to understand the mechanics of the engine,” said Gately. “We have even built one (engine) together. His feedback and understanding of the chassis dynamics and suspension/setup is the best I have seen in a rider. And, he can immediately come up with a solution to go faster.”

In 2014, Shoemaker finished ninth in the final Harley-Davidson GNC1 presented by Vance & Hines point standings. His top-ten effort was highlighted by his second-place finish at Colonial Downs and his third-place finish at Hagerstown. Shoemaker also produced seven top-ten finishes last year and claimed the 2013 Saddlemen Rookie of the Year Award following the season prior.

Shoemaker has ridden the Bonneville Performance/Castrol/Triumph motorcycles at a few amateur races so far in 2015. In those races, he made the main and landed on the podium each time.

Next stop on the AMA Pro Flat Track schedule is the historic Springfield Mile on May 24, which is a favorite of the air-cooled twin Triumph engine. Shoemaker hopes to improve on his 2014 ninth-place finish in the points and he’s feeling very confident in his team heading into the Springfield Mile on Memorial Day weekend.

“We have logged a lot of laps on the new motorcycle,” said Shoemaker. “We have learned a lot. We have made a lot of changes. I am confident we have a very competitive package for Springfield. The work our team has done together has really impressed me. I was able to spend a few weeks with Bill, at the track, back at the shop and let me say, this bike is fast! Opening it up on a tacky mile is going to be a lot of fun for me.”

Shoemaker is also excited to have been invited to the 2015 XGames in Austin, Texas this summer, which is scheduled for June 4-7.

"It was an honor to be one of those chosen to participate in the XGames this year,” said Shoemaker. “Not only am I excited for my team and our sponsors, but also for the entire sport and the other teams invited. This is our chance to shine on a new level. I'm confident we will see XGames fans become AMA Pro Flat Track fans!"

The Bonneville Performance/Castrol/Triumph team will be making special announcements in the near future regarding new sponsors for the XGames and the entire 2015 season.