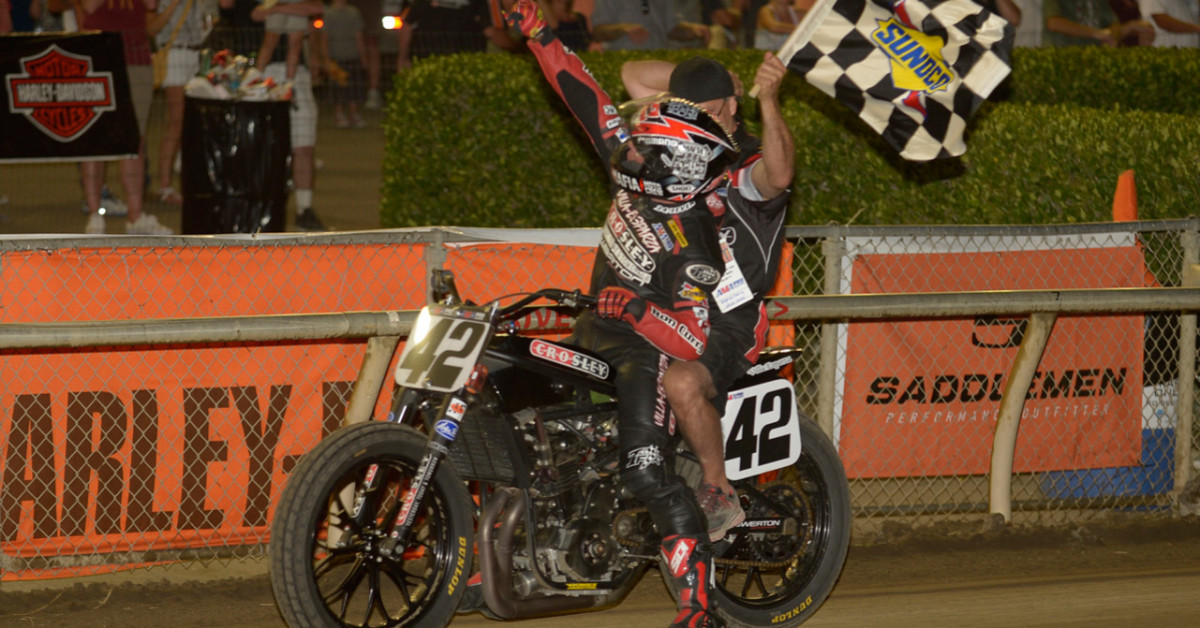 SACRAMENTO Calif., (July 29, 2014) – Four consecutive wins hint that Bryan Smith has been dominant at the Sacramento Mile, but a closer look tells a different story, that Smith needed every ounce of talent and every bit of muscle from his Villa-Esparza/Crosley Radio Kawasaki to pull off the feat, which he completed Saturday at the Cal Expo in Round 8 of the AMA Pro Flat Track Grand National Championship season.

Smith won the Expert main by just .030 seconds over Jake Johnson for his record fourth straight win in the heralded event. His four victories have been by 0.192 seconds – combined.

The back-and-forth affair drew the crowd to its feet on early every lap, and hit a fever pitch the final time around the mile oval. Johnson, on his No. 5 Ramspur Winery Kawasaki, made one last attempt to get by Smith, but wound up a half-bike short. Jared Mees came home in third on his Rogers Racing Harley-Davidson, just .056 seconds back of Smith in a finish no one will soon forget.

“The whole 25 laps boiled down turn four, the last lap,” Smith said. “That four seconds, I just had to really dial the power on and not break the tire loose, luckily, obviously, it worked out.

“It was cool, not only to have a dogfight and come out on top of it – if I hadn’t of won, it wouldn’t have been so cool obviously – but it’s awesome for me that I know the crowd enjoyed it and it kept everybody on their toes. I would rather just win by a straightaway, but from a fans standpoint, I can respect what they like.”

Although it was four in a row for Michigan’s Smith, and he was considered the favorite coming into the event, the result was far from a foregone conclusion.

“It wasn’t sure to me, it was a dogfight,” Smith said. “Jake and Jared were right there the whole time. The way the track was, it made it so no one could really jump out there. … It was a scrap the whole race, it felt like to me. I was just as little looser in the corners than them guys, and, luckily, I was able to hold onto it.”

Johnson was the biggest thorn in Smith’s side all night, powering by Smith in turns one and three multiple times. But on the final lap, the Pennsylvania rider elected to sit back and make one final attempt to take the checkered flag first.

“If the straightaway was maybe 30 feet longer…” Johnson said. “It’s fun, it’s definitely stressful. … It was a dogfight the whole way, I didn’t know what was going to happen, really. I just knew Bryan was kind of controlling the race. I knew he was going to be the toughest to beat. I just tried to latch onto him and try a last-second draft pass at the line and I came up a bit short.”

Smith walked away from California with the points lead over second place Mess. Johnsonis right on their tails in third, eight points behind Smith and six in back of Mees (150-148-142).

“We’re in it, we’re consistently on the box, waiting for that win to happen,” Johnson said. “It’ll come. We’re doing what we need to do, staying up front, staying on the podium. We just gotta keep rolling.”

Mees had spots on the track where he was fastest and even put down the race’s best lap, but ultimately he was third in the mad dash down the final stretch.

“It was a good race, it was a lot of fun out there battling with these guys,” Mees said. “I just had a little mistake on my end here and there and I just couldn’t get there at the very end.”

Brandon Robinson took fourth on his No. 44 USC Kawasaki and was one of a half dozen riders who had the lead at one point in the night. Robinson sits sixth in points, 40 in back of Smith, and certainly not out of title contention.

Defending GNC champion Brad Baker was sixth on his Factory Harley-Davidson and is eighth in points as the AMA Pro Flat Track season enters a crucial span of three races in seven days.

What’s being called the 2-5-8 starts with the Castle Rock TT in Castle Rock, Wash., on Saturday, Aug. 2, followed by the Black Hills Half-Mile by Dunlop in Rapid City, S.D. on Aug. 5, then the Indy Mile in Indianapolis on Aug. 8.

The championship hunt is sure to take a completely different form over just a week’s time.

Davis Fisher looked to be the rider to beat Saturday night in the AMA Pro Flat Track Pro Singles main event at the Sacramento Mile. Fisher and his 67M T.J. Burnett Farms Honda built a comfortable lead on the pack through most of the race – then Kyle Johnson broke free of that group.

Following a thrilling fifth-to-second dive bomb into turn one, Johnson settled in and methodically cut down Fisher’s lead, eventually reaching his rear tire on the final lap. Johnson made the pass in turns one and two, and held off a last-gasp draft pass attempt for his fourth victory in the last five races on his No. 77J Parkinson Brothers Racing Honda.

“I really didn’t think I would be able to catch him that fast,” Johnson said. “I really had to make some perfect laps and just hit all my marks perfectly.”

Once Johnson caught Davis and the crowd erupted in anticipation of a thrilling final mile, strategy came into play. With the draft playing such a large role, Johnson had to pick his spot and consider even sitting behind Fisher and making an attempt to draft by at the line.

“I thought about it, I thought, ‘Maybe if I get out front, he might draft back past me,’” Johnson said. “But I was out front, I just tried to make my corners perfect.”

Fisher wasn’t put off by being in second, knowing he’d have one more shot coming down the homestretch, but he was just short in that attempt.

While Johnson left California with the points lead, Fisher is right on his heels, 122-119, with three races slated over seven days starting with the Castle Rock TT on Saturday.

It was also a big points day for California’s own Nick Armstrong, who rode his No. 44E Southland Racing Honda to a third place finish.

“It feels awesome, California race, it’s kind of like a home race for me,” Armstrong said.
Dominic Colindres (No. 66Y Honda) and Brandon Wilhelm (No. 24J Honda) rounded out the top five in Sacramento.

While it’s Johnson and Fisher in a dogfight atop the points standings just past the AMA Pro Flat Track’s midpoint in the season, the battle behind them is tight, and the duo haven’t left too many riders out of contention with seven races to go.

Ryan Wells and his No. 94B KTM are in third, 11 points back of Johnson, following a sixth place showing in California. Wilhelm and Bronson Bauman (No. 30Z Rod Lake Racing Honda) are fourth and fifth with 87 and 80 points, respectively.

Jarod Vanderkooi is slowly creeping up the standings as well. The youngster on the No. 17F Johnny’s Vintage Motorcycles Honda is eight after finishing seventh in Sacramento and he has two victories to his name this year – one at the Springfield Mile and a Pro Singles checkered flag at Grays Harbor.