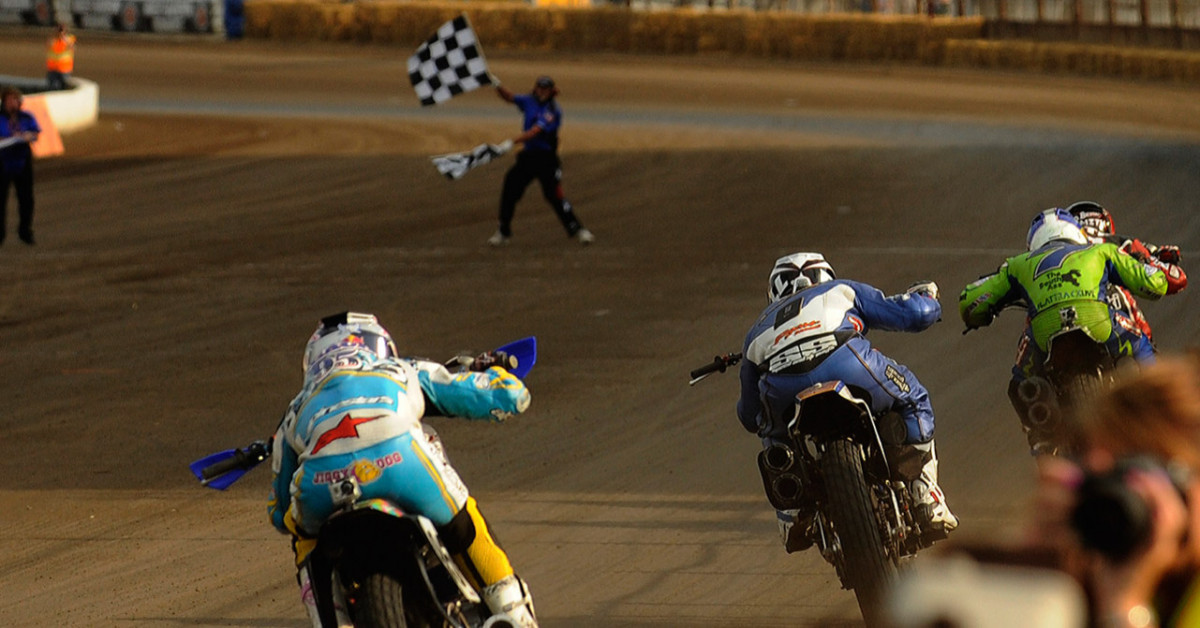 SANTA ROSA, Calif. (September 27, 2012) - When the green flag signals the start of the Santa Rosa Mile on Sunday, September 30th at the Sonoma County Fairgrounds, the action will be fast and furious as America’s top flat track racers vie for those all important championship points.

Round 14 in this season’s 16 race Grand National Championship, the points are tight and the coveted title is still up for grabs.

Leading the battle with 243 points is Jared Mees who just took the 2012 AMA Pro Flat Track Expert Singles title. Mees has taken one win and eight podium finishes so far. Last year he finished second overall, this time out he is looking to take the title.

Just 12 points behind is reigning champion Jake Johnson. Johnson, who also earned the title in 2010, is looking to make it three-in-a-row. Although he has finished on the podium eight times so far this season, he had yet to take the checkered and would like to make Santa Rosa his first victory of the year.

Sitting in third place, 23 points out of the lead is Sammy Halbert, who has taken three wins this season. A hard charger from start to finish, Halbert, who finished last season in third, wants to move it up a notch. And, more than that, he would like to be the rider to earn the honor of winning the first Santa Rosa Mile in 42 years.

In fourth is Bryan Smith who won the Sacramento Mile last year and this year and also took top honors at the recent Springfield Mile. Extremely skilled on mile track, Smith is looking to lead the field across the Finish Line.

Holding down fifth place is Brad Baker, the 2011 Rookie of the Year. Looking to take his first GNC win, Baker will be ready to give it his all when the green flag flies.

And, these are just five of America’s top AMA Pro Flat Track stars. Add names like Henry Wiles, Kenny Coolbeth, Jr., Matt Weidman, Jeffery Carver, Jr., Briar Bauman and a host of others, and you will know for certain that the action will be fast and furious from beginning to end.

Hitting speeds up to 130 mph and racing handlebar-to-handlebar, flat track racing is indeed the most exciting form of two-wheel racing in America today. There is no time to coast, no time to try and figure out strategy. It is sheer go-for-it from beginning to end.
And, this time out, no rider entered today has ever turned a wheel on the Santa Rosa Mile track. When practice starts, on Sunday, September 30th, it will be the first time they have ridden on this historic track. Everyone will be on the same page and no-one will have an edge.

Even closer are the points in this year’s Pro Singles battle. Leading the championship is Stephen Vanderkuur with 151 points. Right on his heels is Jason Isennock with 150 poimts and right behind is Jake Shoemaker with 149 points. It simply doesn’t get any closer than this.

While these three will be giving it everything they’ve got, they will have to contend with Shayna Texter. Standing just 5 feet and weighing in at 95 lbs., this top ranked competitor is nothing short of great as evidenced by her earning the distinction of being the first woman in the 50 year history of AMA Pro Grand National racing to ever win a GNC Pro Singles Main Event.

Taking the checkered at this year’s AMA Sacramento Mile and Knoxville, she would like nothing more than to add a third victory to her growing list of credits.

More than just a one day affair, this year’s Santa Rosa Mile features a full weekend of activity with a number of exciting supporting events. On Friday and Saturday evening, in the Chris Beck Arena at the Fairgrounds, some of the country’s best short track competitors will vie for top honors. The North Bay Motorcycle Club will bring their decades of short track expertise to co-promote the District 36 Pro-Am Short Track double header. AMA Pros will join local heroes on Saturday to show who is the best of the best.

On Saturday afternoon from Noon to 4:00 PM, the Santa Rosa Mile will host a special Wine Country Art and Wine Fest. Fans will be able to taste some of the area’s best wines, view art from local artists as well as motorsport /motorcycle art. Of special interest will be a selection of outstanding photographs from the Mahony Collection. Featured artist Dan Mahony will be on hand showcasing his photographs and those of his dad, the late Walt Mahony. The Mahony Photo collection contains some of the more iconic photos of the sport. All proceeds from the Wine Country Art and Wine Fest will benefit the Santa Rosa Express, a local youth running club.

Admission to this special show is just $15 and includes a special Santa Rosa Mile Souvenir glass. Tickets can be ordered on line at www.santarosamile.com.

On Saturday evening at 6:30 pm the Santa Rosa Mile will host a Grand Marshal’s dinner honoring Jim Rice, Mark Brelsford, and Jim Odom the Grand Marshals for this years Santa Rosa Mile. Fans will be able to purchase tickets and come and enjoy an excellent catered dinner with the Grand Marshals, some of the Legends of Flat Track, and many of the AMA Pro stars of today’s Grand National Championship. Tickets can be ordered on line at www.santarosamile.com and cost $100.

And, then on Sunday, fans will be able to watch the incredible action of the AMA Pro Flat Track riders as they battle for glory.

This is a weekend you won’t want to miss. Mark your calendar and make plans now to attend the return of the Santa Rosa Mile.

Tickets are on sale through http://santarosamile.showclix.com, www.santarosamile.com or by calling 707-703-3633.

Weekend Pass Upgrade (includes admission to Mile, plus both nights of short track) – Add $45 to above prices