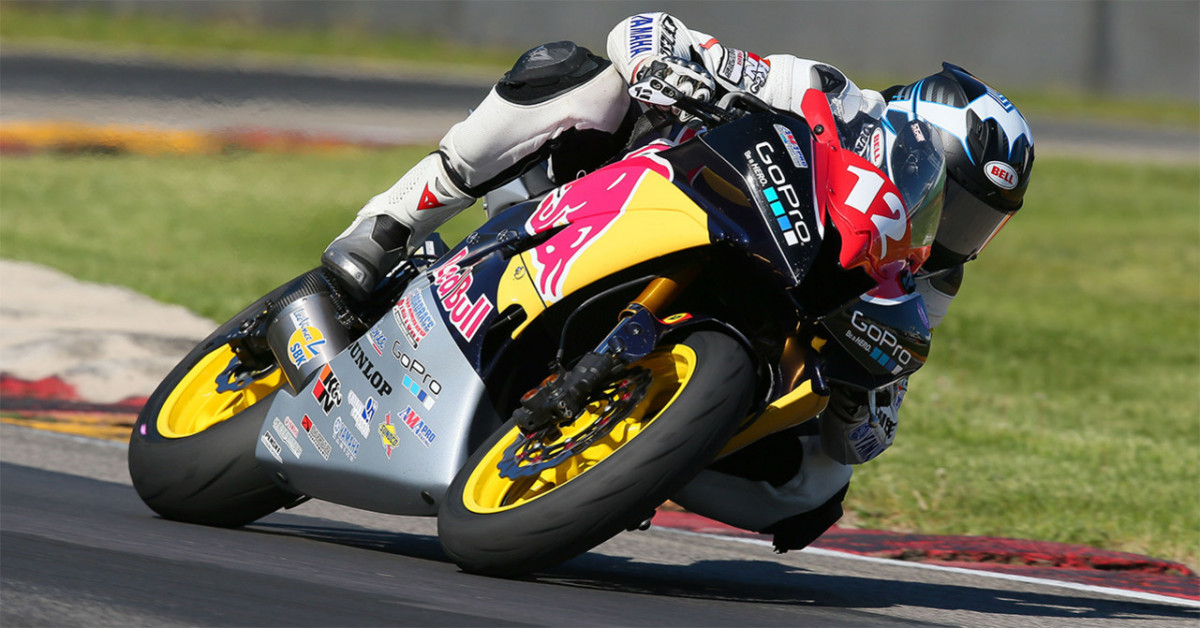 Tomas Puerta has all but locked up the $5,000 prize Saddlemen generously provides that goes along with earning the award in AMA Pro Road Racing's GoPro Daytona SportBike class. The Colombian sits 11th in the standings and has accumulated 46 more points than the next best contestant, Tucker Lancaster. It would be a long-shot for Lancaster to make up the difference in points with just one round of GoPro Daytona SportBike action remaining, which is set to be held at New Jersey Motorsports Park in Millville, N.J., Sept. 13-14, 2014.

For anyone remotely familiar with AMA Pro Road Racing, Puerta's success this season hasn't been that surprising. The 21-year-old is the reigning SuperSport national champion and rides for one of the most sought-after race teams in the business today - RoadRace Factory/Redbull - and plays teammate to Jake Gagne, the current GoPro Daytona SportBike points leader. He's likely already banking on his money for this year's Saddlemen Rookie of the Year Award, and there's no telling how far he'll go next year with a full season at this level under his belt.

In AMA Pro Flat Track Grand National Championship competition, Wyatt Maguire's 11th place finish at Grays Harbor Raceway last weekend was enough to put him ahead of Shayna Texter by a mere three points in the standings. If Maguire holds on to earn the most points out of all of the class-rookies this season, a lineup that features the likes of Texter, Justin Maloney, and Cody Johncox, he would be the recipient of the $5,000 award that goes along with winning the 2014 Saddlemen Rookie of the Year Award.

"I'm definitely striving towards the award and it would mean a lot to me if I were to win it," said Maguire. "It enables us rookies who are out of the championship chase to have something to compete for. There are a lot of battles going on right now. Week-in and week-out we're all competing for it. Last weekend's 11th place finish was pretty cool and I hope to keep the momentum rolling at Sacramento."

Maguire's main competition for the Rookie of the Year honor, Texter, won the Sacramento Mile in the Pro Singles class last year, so he will need to be on game if he wants to stay in front.

Saddlemen has been helping AMA Pro Racing reward some of the best up-and-coming stars of motorcycle racing by sponsoring the Rookie of the Year award for the last four seasons. Saddlemen is also the official seat and luggage of AMA Pro Road Racing and AMA Pro Flat Track.

Where are they next?

Fans can watch the Saddlemen Rookie of the Year Award battle heat up in Grand National Championship competition this weekend when AMA Pro Flat Track heads to Sacramento, Calif. for the Sacramento Mile on July 26. For tickets and more information on the event, please visit http://www.sactomile.com/tickets/ or call 1-844-722-6453. All of the action will be streamed LIVE on FansChoice.tv.

The next time AMA Pro Road Racing takes to the track will be August 8-10, when Vance & Hines Harley-Davidson Series competitors roll their thundering Harley's off the trucks at Indianapolis Motor Speedway in Indianapolis, Ind.