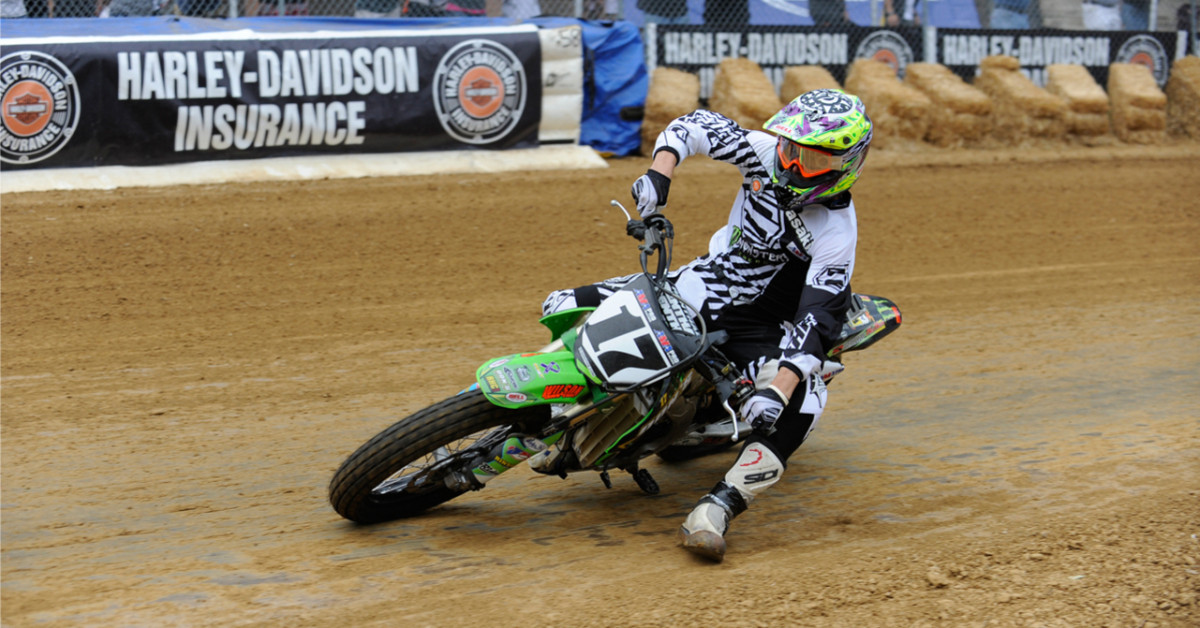 PEORIA, Ill. (August 12, 2012) - Henry Wiles could have taken his girlfriend out to dinner and a movie during this year's Peoria TT and still would have managed to come away with another AMA Pro Flat Track victory. With over half the season in the books, Wiles took no prisoners Sunday afternoon as he stole the show and ran away with the checkered flag for the eighth straight year at PMC Race Park.

It was a great day for racing as thousands of passionate fans wrapped around the premises only feet from the track as they witnessed the true power that the bikes of AMA Pro Flat Track produce. Feeding off the crowd's roar, Wiles was in a different area code right from the get-go during the AMA Pro Harley-Davidson Insurance Grand National Championship presented by Motorcycle-Superstore.com and Lucas Oil main event and found himself pumping his fist as he crossed the finish line.

"It feels really good," Wiles said. "I just want to thank my sponsors, these guys don't mess around. I want to thank my family and my girlfriend. I'm thankful that I was able to come out on top. I went hard from the get-go and was fortunate to pull the holeshot and run a clean race. I'm just so happy right now. The Peoria fans are great, I love coming to race here."

Henry Wiles (Don's Kawasaki) has become a household name here in Peoria, Illinois, as he's been the clear-cut winner for eight straight years as he continues his dominance at the historic venue. Second and third place finishers, Jared Mees and Jake Johnson made several attempts at closing the gap during the race, but unfortunately for them, Wiles never gave an inch and diminished any hope they might have had in catching him. JD Beach and last week's winner Sammy Halbert rounded out the top five, although it was no easy task as they had to fend off fierce competitors to claim their spots.

With the win, Wiles now sits in fifth place among the standings, poised to make a run at the title. He stands behind the likes of elite competitors such as; Jared Mees (Montgomeryville Cycle), Jake Johnson (Zanotti Racing), Sammy Halbert (Fredericktown Yamaha) and Bryan Smith (Oasis Homes).

AMA Pro Motorcycle-Superstore.com Pro Singles
Pole sitter Dominic Colindres (Weirbach Racing) got off to an incredible start in the AMA Pro Motorcycle-Superstore.com Pro Singles main event, but it was erased as a four-bike pile-up on lap two forced the red flags to come out and demand a restart. However, the restart had no effect on Collindres as he got the holeshot for the second time and never looked back on his way to victory.

There was no denying Collindres as he was on a different planet winning by more than a full second over second-place finisher Stephen Vanderkuur (Parkinson Brothers Racing Honda). Justin Reed (Rich King Racing) claimed third place with a solid performance on the KTM 450 SX-F.

The most exciting battle was the race for the fourth and fifth slots where the margin between six riders was less than a second. Rodney Spencer Jr. (831 Pinnit) and Nick Mataya (Shoe Racing) snuck in to round out the top five, respectively.

"I got the holeshot after the restart, usually something goes wrong in a situation like that but it actually helped me," Collindres said. "I really liked the track and I just want to congratulate Stephen (Vanderkuur), he was on me the whole way and really gave me a good run. I also want to thank the fans and everyone who came out and cheered me on."

Next Up
The stars of AMA Pro Flat Track will return to Indianapolis, Indiana on August 18, 2012. Visit http://indymile.com/ for tickets.