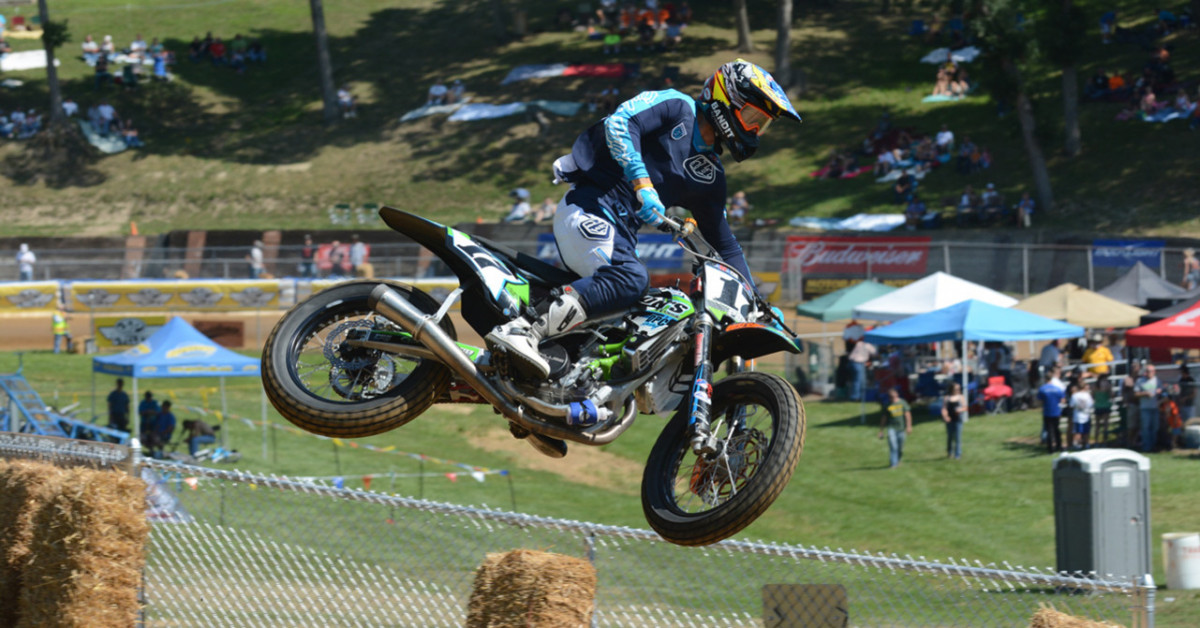 The series has two TT (Tourist Trophy) events slated for 2014, and the second, the Peoria TT, is coming up this Sunday at Peoria Race Park in Peoria, Ill. Wiles has been the definition of dominant in TT events, which feature a single jump and additional turn compared to standard flat track races. A win on Sunday would give the Michigan rider 10 straight Peoria TT victories and a season sweep of AMA Pro Flat Track TT races.

Just weeks ago, Don’s Kawasaki’s Wiles shook up the point standings with a victory in the Castle Rock TT in Washington. Wiles currently sits eighth in points, but could make a big jump with a checkered flag in Illinois.

With TT events testing a different set of dirt-track skills, the results are anything but predictable. Current GNC points leader, Rogers Racing’s Jared Mees, missed the podium for the first time in five events in Castle Rock, but still scored a solid fourth there. His main competition for the title, Villa Esparza/Crosley Radio’s Bryan Smith, was relegated to 10th in that race. Smith bounced back with a second in the Indy Mile on Friday night, and he trails Mees by just a single point in the championship hunt.

Ramspur Winery’s Jake Johnson has been impressively consistent all season, never failing to place in the top 10. Johnson, who was seventh at Castle Rock, is a mere eight points back of the leader.

Kenny Coolbeth and his Zanotti Racing entry bounced back after failing to qualify for the main event at the Castle Rock TT by winning the prestigious Indy Mile. The timely victory put Coolbeth back in title contention as he trails Mees by 25 points.

Fredericktown Yamaha’s Sammy Halbert is fifth in points, 19 behind Coolbeth, after settling for 15th at the Indy Mile last time out.

Reigning GNC champion Baker, riding for Brothers Power Sports, might have found his stride after a subpar start of the season due to a broken arm. Baker was on the podium, in third at Castle Rock, then matched his previous season’s best finish of fifth in Indianapolis. As a result, Baker is sixth in points, 20 behind Halbert.

In the Pro Singles class, Kyle Johnson took over the championship lead again with a runner-up finish at the Indy Mile. Parkinson Brothers Racing’s Johnson was the victim of a last-second draft pass for the victory by Johnny Vintage Motorcycle’s Jarod Vanderkooi.

T.J. Burnett Farms’ Davis Fisher is second in points, but may miss the Peoria TT following a crash at the Indy Mile.

Johnson stuggled at Castle Rock, riding to a 14th place showing. KTM’s Ryan Wells is third in points, 25 back of Johnson (146-121) and was 10th at Castle Rock. A strong showing combined with another lackluster TT finish from Johnson could catapult Wells back into serious title contention.

Meanwhile, Vanderkooi is continuing his surge up the standings. The Ohio native was too young to start the season at Daytona, but made up for lost time, claiming two Pro Singles victories to make his way to fourth in points with an even 100. Rod Lake Racing’s Bronson Bauman rounds out the top five and also has 100 points to his credit.

AMA Pro Flat Track is a national motorcycle racing series in North America and is considered one of the oldest forms of motorcycle racing. Sanctioned by AMA Pro Racing, the Series is highly regarded as the most competitive form of dirt track racing in the world. The 2014 schedule consists of 16 rounds on the country's finest flat track courses. For more information on AMA Pro Flat Track, please visit www.amaproracing.com/ft.