Once viewed largely as TT ace extraordinaire, Jesse Janisch is no mere one-trick pony. While his first six professional race wins were TT victories in Parts Unlimited AFT Singles action, Janisch showed himself to be an all-around threat aboard a Vance & Hines Harley-Davidson XG750R after being signed midseason as an injury replacement. That said, there’s no denying how he first made his name; Janisch was the dominant TT power on the undercard in 2019, securing victories at the first three Parts Unlimited AFT Singles TTs of the season. The versatile Wisconsinite started riding when he was four and quickly developed a thrilling riding style that he’s put to good use in motocross, supermoto, and roadracing (where he competed for a time in AMA Superbike). Janisch returned to Progressive American Flat Track racing in 2015 after a few seasons away from the sport, and quickly established himself as one of the Parts Unlimited AFT Singles class’ brightest stars. After logging back-to-back championship finishes of fifth in 2018 and sixth in 2019, Janisch scored three top tens while running a partial season in 2020. He was drafted back to competition midway through the ‘21 season by Vance & Hines and repaid them for the chance to revive his career with five top-four finishes in just six Mission Production Twins starts, including a victory at the Charlotte HM season finale. That impressive form earned Janisch a full season ride with the squad for ‘22. 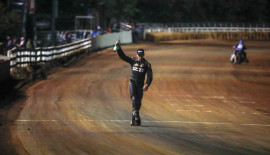 Jesse Janisch: No Time For Anything But His Everything

Jesse Janisch has defied the racing gods before but he's outdoing himself in 2022.