Jay Maloney kicked off his racing career on ice at the age of four. The following summer he was dirt tracking -- an interest he would continue to develop into his teenage years. By the time he was 17, Maloney was heavily into motocross. While originally intended as a training method, his natural MX talent was such that he was encouraged to pursue the discipline competitively. That resulted in a stint as an Arenacross racer before he eventually found his way back to flat track. The New Jersey native then won several regional dirt track and national ice racing championships. Maloney has focused the bulk of his efforts in Progressive American Flat Track in recent seasons. He scored a pair of top tens in Mission SuperTwins duty in 2018 and logged numerous finishes just outside that mark in 2019. And in 2020, he registered points-paying finishes in all 15 Mission SuperTwins races. Maloney currently serves as a crew chief for the Mission Roof Systems Mission SuperTwins program. Fueled by adrenaline and speed, Maloney spends his free time snowboarding, wakeboarding, and mountain biking. 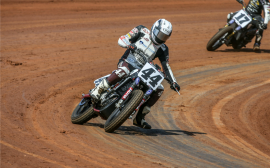