Cameron Smith went a long way toward indicating his potential as an Progressive American Flat Track racer in 2017, just his third season as a professional. Smith improved from qualifying for just a single Main in 2015, to scoring a late-season top five in 2016, to racking up eight finishes of sixth or better in ‘17. Highlighted by three top fours, Smith finished sixth overall in the deep and competitive 2017 Parts Unlimited AFT Singles championship. Smith showed plenty of speed when in the groove over the following several seasons, including a fifth-place run at the Minnesota Mile in 2018 and a sixth-place performance at the Volusia Half-Mile in 2020. He at last earned his first career Progressive AFT podium finish in 2021, finishing as the runner-up in the Mission Production Twins Main at the OKC Mile I. He then did it again with a second-place finish at the New York Short Track I just four races later. The Pennsylvanian started racing when he was six years old. He looks to Mission SuperTwins pilot Brandon Robinson as a mentor, and like Robinson, Smith is an avid bicyclist. 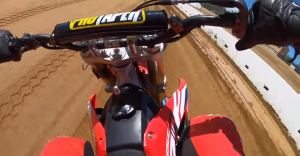 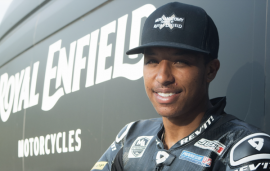 Cameron Smith will compete for Moto Anatomy X Powered by Royal Enfield at the next two Progressive AFT rounds. 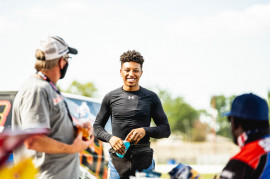 Published by Sideburn Magazine, the Official Magazine of Progressive AFT.