The very first time Kevin Stollings, Jr., lined up for a Parts Unlimited AFT Singles Main Event, he proved himself a podium finisher, and he hasn’t stopped racking up top threes ever since. The “Freak of Nature” backed up his five-podium 2016 rookie campaign with an even stronger sophomore season, adding the first two wins of his Progressive American Flat Track career to a six-podium effort in 2017. From 2018-2021, Stollings collected another win, several podiums, and numerous top fives while adding Mission Production Twins duty to his program alongside his preexisting Parts Unlimited AFT Singles effort. A threat to win on Miles, Half-Miles, and Short Tracks alike, the Indianapolis native started riding at the age of five. As an early amateur, Stollings proved himself as a Speedway hotshot. He later earned the coveted AMA Dirt Track Horizon Award in 2015 after winning the AMA Grand Nationals 450 Open Singles and 450 Mod Championships that season. 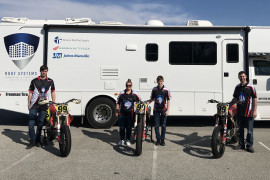