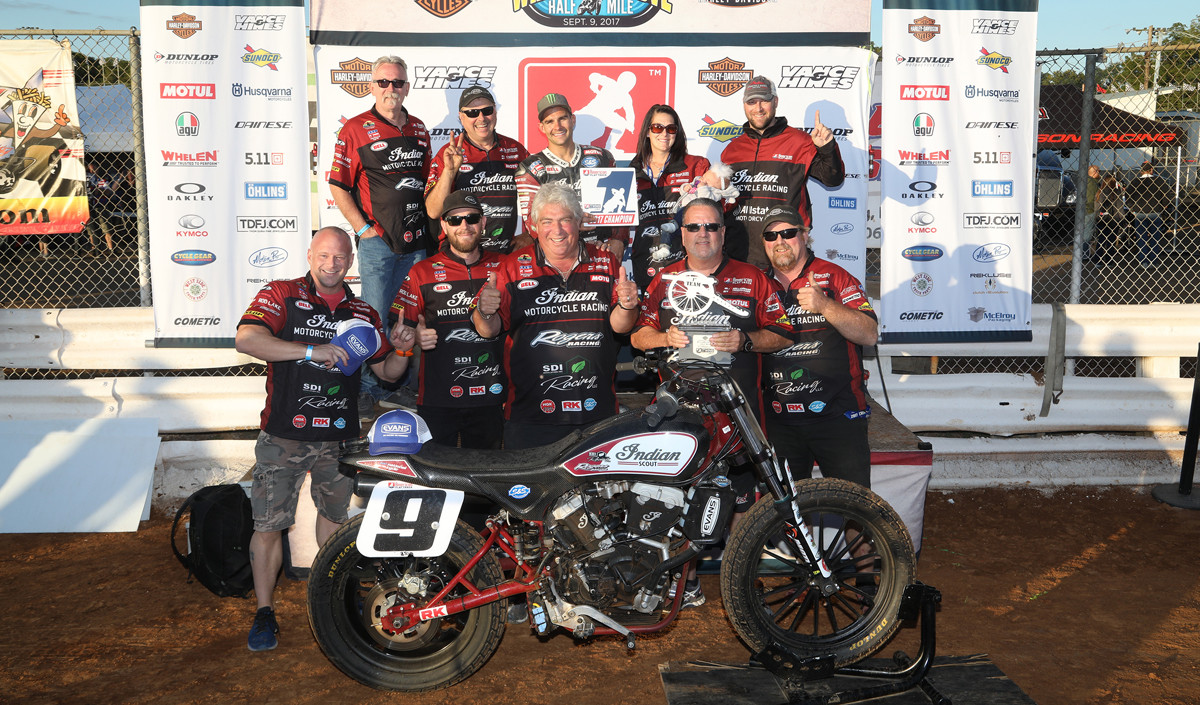 After nearly a quarter-century absence, it was a welcome return to Williams Grove Speedway as fans packed the house to witness the Pennsylvania native score his fourth overall premier class championship.

“Man, it's an honor to be able to come to Williams Grove -- I was born and raised 45 minutes from here -- and to clinch this championship in front of all my friends and family,” Mees said. “We had a phenomenal year. I had a magnificent team behind me. I don't know what else to say. I give all the credit to those guys -- they work so hard week-in and week-out. The Indian was a phenomenal motorcycle for me from start to finish. It's unbelievable.

“To win a championship in the fashion we did this year and -- no offense, but to dominate it. To go out there and pull off nine wins and clinch the championship with two races to go, it was phenomenal. I never thought it would have happened, especially considering the talent of the other guys out there.”

It also meant a lot to Mees to be able to make history, by scoring the brand’s first Grand National Championship title.

Baker, who has been eagerly searching for his first win of 2017, took comfort in the fact that he has made progress on track conditions that don’t favor him and scored his 11th podium this season.

“It was a very demanding race today,” Baker said. “These types of tracks, you can't make a mistake. It was really, really easy to make a mistake, just because of how slick it was and just one little line that we were all shooting for. I felt like I had something for Jared earlier on today, but it turned into a little notch groove, and those types of tracks aren't my strong point by any means. I've been getting better at them, and it takes a lot of discipline and maturity from a rider to ride those types of tracks -- like Jared with his experience. The guy is just on top of his game right now. I have no excuses. The guy is mentally focused, he's fit, and he's got a great team. He's the guy we're all gunning for. Hats off to Jared and his whole team for doing such a great job.”

Joining the Indian Wrecking Crew duo on the podium was Briar Bauman (No. 14 Zanotti Racing Kawasaki Ninja 650) -- his fourth of the season. Bauman also echoed Baker’s feelings about the challenging nature of the track.

“It was awesome racing with these guys, but the track was very tough and demanding today,” Bauman said. “You had to be on your game and hit every mark perfect. It was challenging, so I'm happy to get up here (on the podium) on a slick groove. We were pretty quick all day, so it feels really good to give this back to Zanotti Racing.”

Leading the way for the factory Harley squad was Jake Johnson (No. 5 Harley-Davidson Factory Flat Track Team XG750R), who finished a solid fourth at his home race. Completing the top five wasSammy Halbert on the No. 69 Estenson Logistics Yamaha FZ-07.

Despite already being mathematically eliminated from title contention, Kevin Stollings, Jr. (No. 99 Ben Evans Honda CRF450R) continued to stake his claim as the outright fastest rider in the AFT Singles class with a dominant victory.

Stollings' second win of the season was an appropriate way to close out a day in which he entered the Main Event as Best Qualifier for a class-leading fifth occasion this season.

Stollings tussled early with title leader Kolby Carlile (No. 36 Estenson Racing Yamaha YZ450F), who stormed to the holeshot and led the opening two laps. On lap 3, Stollings powered around the outside of Carlile and steadily built up a healthy advantage which he held to the checkered flag.

"I didn't get the start I wanted to, and it seemed like Kolby was pulling away," Stollings said. "I was kind of getting scared because I didn't want him to get too far away. I kept my cool and ended up passing him on the outside on the third lap or so. From there, I just kept my line and stayed smooth."

Price did well to minimize the damage after suffering a terrible launch off the line from the second position. He carved his way up to fourth and made an effort to steal away third late as well, but Wyatt Anderson (No. 120 Waters Autobody Racing KTM 450 SX-F) held strong to claim the final spot on the box. Anderson's third-place finish made it three different manufacturers represented on the podium.

Meanwhile, the titles hopes of long-time championship leader Shayna Texter (No. 52 Richie Morris Racing Honda CRF450R) dimmed a bit on Saturday as she failed to make the Main Event due to a flat tire. Now 29 points back, Texter is going to need some serious help to somehow claw her way back into the fight.

As part of American Flat Track's television broadcast package with NBCSN, the cable network will air the Harley-Davidson Williams Grove Half-Mile presented by Appalachian Harley-Davidson on Thursday, September 28, at 10:00 p.m. ET as part of a Half-Mile doubleheader with the Lone Star Half-Mile presented by Indian Motorcycle, which follows at 11:00 p.m. ET. Both one-hour shows will feature flag-to-flag coverage of both Main Events along with exclusive features giving fans a behind-the-scenes window into the sport. To check out the complete NBCSN schedule, please visit http://americanflattrack.com/events-nbcsn.

American Flat Track will head to Fort Worth, Texas, on September 23, for the penultimate round of the 2017 season -- the Lone Star Half-Mile presented by Indian Motorcycle. Live coverage can be viewed on FansChoice.tv beginning at 2:00 p.m. CT with Opening Ceremonies scheduled for 6:00 p.m. CT. Tickets are on sale and can be purchased at  https://www.stubwire.com/event/lonestarnational12mile/texasmotorspeedway/ftworth/15769/.