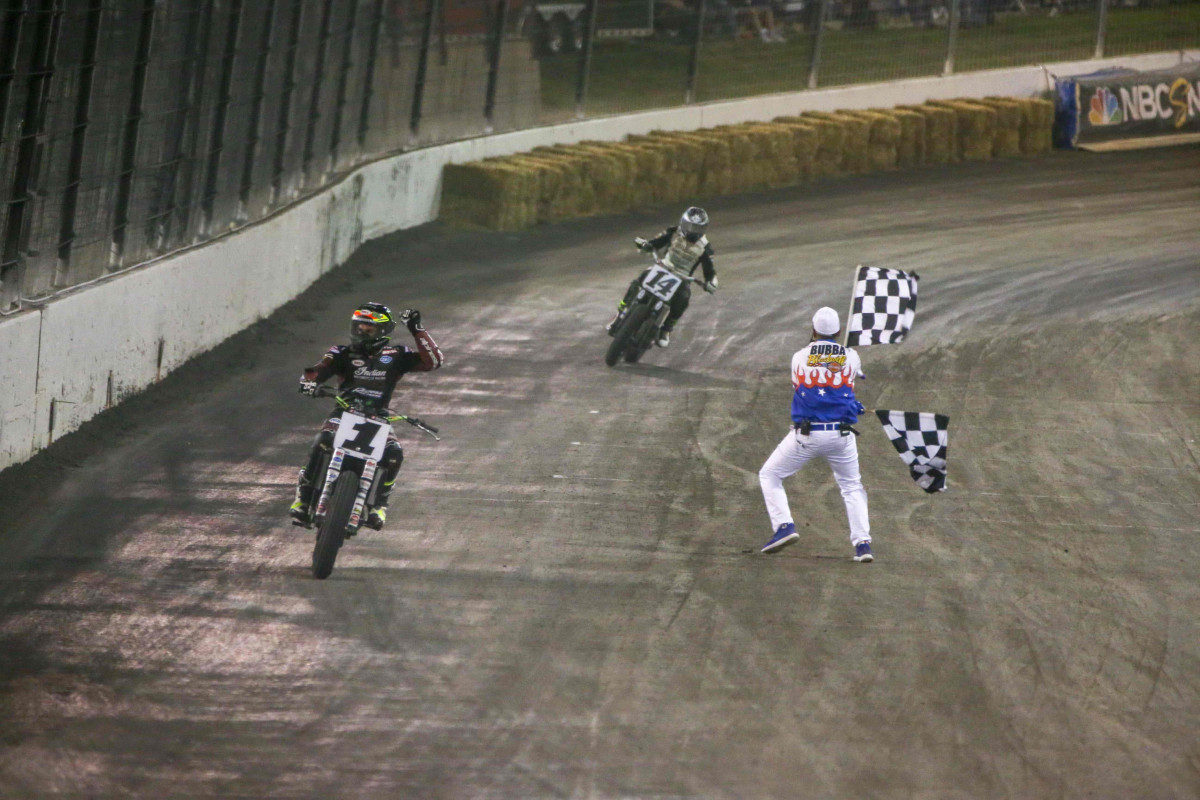 That drama was effectively guaranteed even before the day’s racing activities began, coming only one day following the announcement that Mees had been disqualified and stripped of his win at the previous round in Atlanta for using a chemically altered tire.

But the twists only stacked up from there. The entire evening program was loaded with thrills and spills, the implications of which are almost certain to be felt throughout the remainder of the 2018 title fight. Big name after big name was eliminated from competition even prior to the Main, including Mees’ fellow Indian Wrecking Crew members Brad Baker and Bryan Smith.

Baker went down hard in his Heat and could not continue, and then Smith lost the front in Semi 1, initiating a spectacular, multi-rider incident that also collected Jake Johnson and Stevie Bonsey, who was launched several feet into the air in terrifying fashion. Adding more drama, Kenny Coolbeth, Jr. – the AFT Twins presented by Vance & Hines points leader coming into the weekend – simply failed to make the Main, finishing outside the top nine in Semi 2.

Meanwhile, Mees hardly put a wheel wrong aboard his Indian Scout FTR750 all night long. He was momentarily squeezed out at the start of the Main, briefly dropping to third, but he systematically worked his way past Chad Cose and early leader Briar Bauman to grab the lead. Once established in front, Mees was in complete control of the contest to the checkered flag.

The triumph was a double dosage of redemption for the defending champ; Mees finished second in Texas last year – the only time in the most recent seven Half-Miles in which he failed to stand atop the podium.

After the race Mees said, “First off, thoughts and prayers to all the downed riders. I don’t know the condition of any of them, but we had a lot of downed riders tonight and nobody wants to see that. [All riders were reported to be awake and alert afterward.] On my end, we just came out and were really focused on getting this win, and we made it happen. We were fast right out of the gate. Huge hats off to my entire team for just sticking behind me and making it happen for me week-in and week-out. The Indian motorcycle is a phenomenal bike for me.”

And just like that, Mees is back in a familiar position – leading the AFT Twins championship table with 50 points – despite his Atlanta DQ. Henry Wiles, who finished fifth tonight, is second, followed by Bauman in third.

Earlier in AFT Singles action, Morgen Mischler (Cycle Craft Yamaha) narrowly fended off a hard-charging Husqvarna-mounted Shayna Texter to secure his first-career professional victory by a scant 0.094 seconds. At the start, Texter slashed her way forward aboard her Husqvarna FC 450, picking off several rivals on a track where most struggled to overtake. However, she could not quite find a way past race-leader Mischler once she arrived on his rear wheel, no matter how desperately she tried.

Mischler rebuked numerous attempts by Texter, including – and most crucially – coming off the race’s final corner with his sideways Cycle Craft Yamaha YZ450F bucking and protesting all the way to the checkered flag. Texter was right there, close enough to take advantage, but Mischler’s swerving Yamaha blocked her from making the pass.

Mischler’s victory put to rest any lingering doubt he may have had regarding his skills to compete with, and beat, the best the AFT undercard has to offer. He said, “It’s one of those things – when you move up to the pro ranks, you ask yourself if you belong. On that last lap... it stepped out pretty good, but I just pinned it.”

Check out our Texas Half-Mile NBCSN broadcast on Sunday May 6 at 4:00 pm ET, with a re-air broadcast the following day at 4:00 pm ET. The complete schedule for AFT on NBCSN can be viewed at americanflattrack on NBCSN.

American Flat Track will be back in action next Saturday, May 5, for the Calistoga Half-Mile presented by Indian Motorcycle in Calistoga, Calif. Live coverage can be viewed on FansChoice.tv beginning at 5:00 p.m. ET with Opening Ceremonies scheduled for 8:30 p.m. ET. Tickets are on sale now and can be purchased at Calistoga Tix.