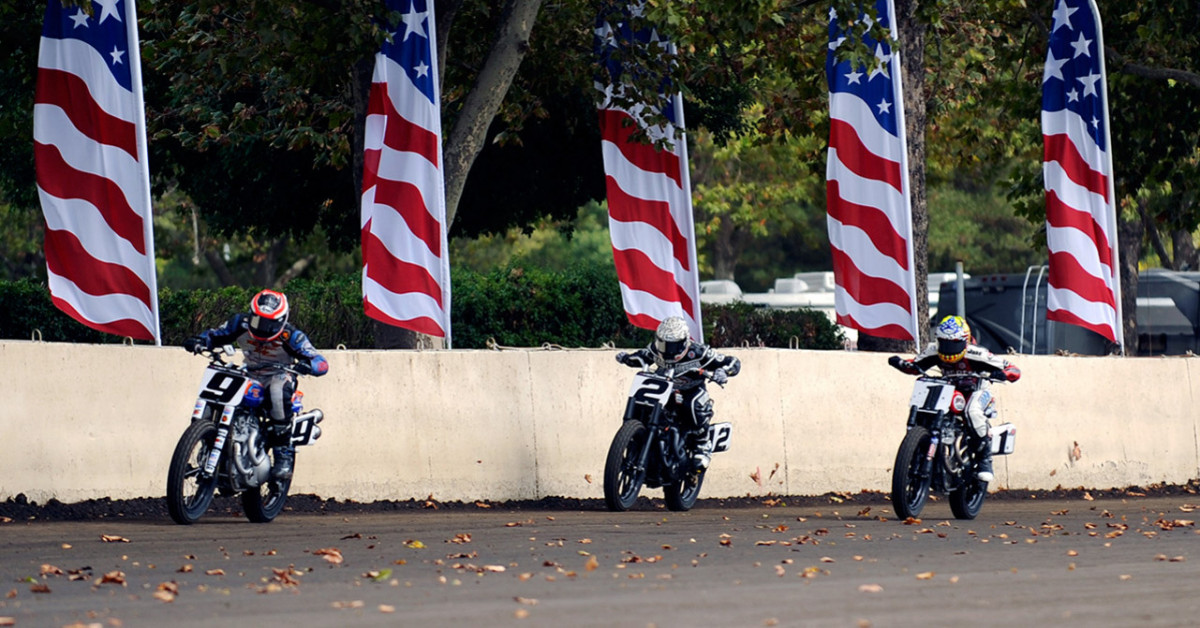 DAYTONA BEACH, Fla. (Sept. 17, 2014) – The dog days of summer may have come and gone, but the AMA Pro Flat Track competition is heating up right on cue, as just 23 points separate Bryan Smith, Jared Mees and Jake Johnson atop the Grand National Championship point standings with two races remaining on the 2014 schedule.

On Sept. 27, AMA Pro Flat Track race teams and competitors will battle it out on West Coast soil for the fourth time this season, at Calistoga Speedway in Calistoga, Calif., for the Calistoga Half-Mile. The series will then head approximately seven hours south for the Flat Track Finals, set to take place at the LA County Fairplex in Pomona, Calif., on Oct. 11.
Similar to recent seasons, the pursuit for the No. 1 plate is coming down to the wire. Smith, who holds a nine-point edge over Mees for the overall points lead, has never led the chase this deep into any season throughout his career, and the No. 42 Villa-Esparza/Crosley Radio Kawasaki pilot seems to be riding with more tenacity and confidence in 2014 than ever before.

Over the years, Smith has been widely known for his dominance of one-mile circuits. Critics might suggest he wasn’t a legitimate threat to his opponents on half-mile circuits and shorter courses. However, this year, Smith proved the naysayers wrong by collecting a pair of top ten finishes in both TTs and a half-mile victory at Hagerstown. Of the four half-mile races that have taken place so far this season, Smith has landed on the podium in all but one, and it’s important for the Flint, Mich., product that he find similar success in both remaining half-mile races to increase his chances of claiming his first Grand National Championship.

Breathing down Smith’s neck heading into the final two events is 2012 Grand National Champion Mees. Unlike Smith, Mees’s niche over the years has been on the half-mile circuits, and if anyone were to rip the overall points lead from Smith’s talons later this month, it would be Mees. The Clio, Mich., native has scored a pair of half-mile victories already this season aboard his No. 9 Rogers Racing Harley-Davidson at both the Lima Half-Mile and the Grays Harbor Half-Mile. Mees and Smith have been in a dog fight in just about every race this season and it’s always exciting to see whose tire finishes first. The next two races, Calistoga and Pomona, should be no exception to that excitement between the two.

Though he’s 23 points back, don’t count Johnson out of the fight just yet. The 2011 Grand National Champion has performed at his highest level since winning the title three years ago and is more than capable of ripping off two straight wins to complete what would be an extraordinary comeback in the points. Johnson has successfully ridden four different-branded motorcycles so far this season (Kawasaki, Honda, Harley-Davidson, Ducati). It remains to be determined which machine the No. 5 Ramspur Winery rider will compete aboard at Calistoga, but one thing is for certain, whichever one he chooses will be fast.

For tickets and more information regarding the Calistoga Half-Mile, scheduled to take place on Sept. 27, please visit http://www.showclix.com/events/19173 or http://www.flattrackcalistoga.com/. Fans who are unable to attend the event are encouraged to tune into FansChoice.tv to catch all of the racing action from Calistoga live and free of charge.