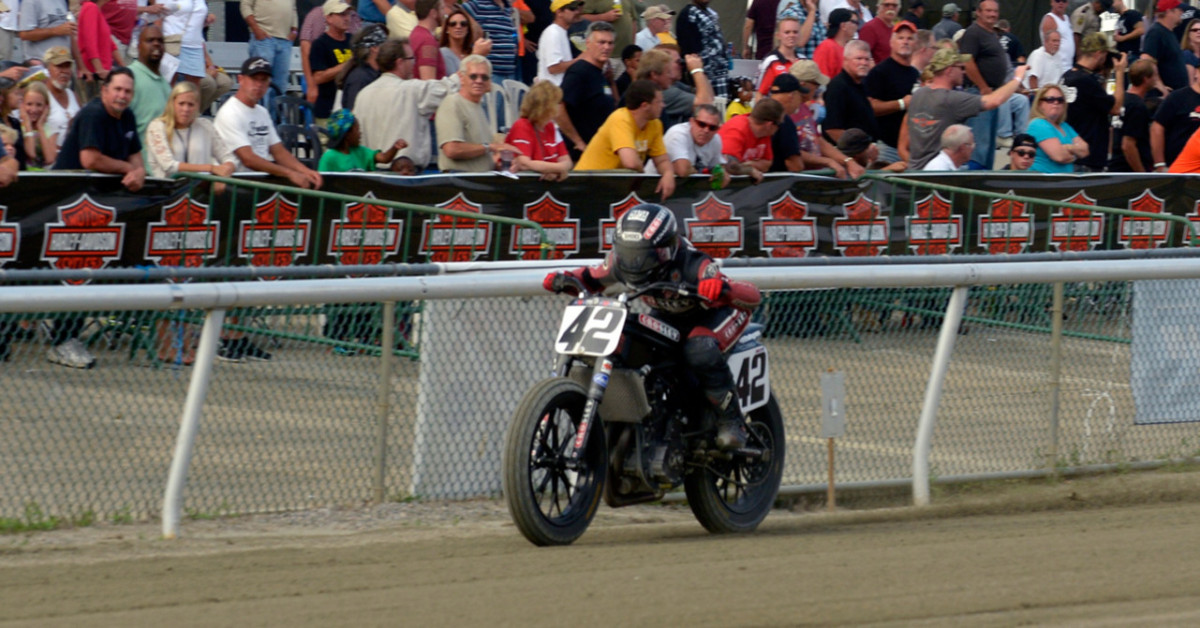 DAYTONA BEACH, Fla (Aug. 26, 2014) - Bryan Smith and his Villa-Esparza/Crosley Radio team were able to pack up the bike and leave the track as winners for the fourth time this season, but as they rode away from Colonial Downs on Saturday, they were doing so as the AMA Pro Flat Track Grand National Championship points leaders for the first time in 2014.

Smith, by virtue of his last-to-first win at the Virginia Mega Mile, owns a six-point lead over Roger Racing's Jared Mees, who was fifth on the 1.25-mile track. Ramspur Winery's Jake Johnson kept himself in series title contention as well, with a third place showing and now sits 18 points back of Smith.

Smith was fastest all day in Virginia, and his Kawasaki was holding up while other competitors' bikes had troubles with the demanding flat-out oval. But after he was ruled to have anticipated the start, Smith was forced to start the main event from the fourth row, alongside Mees on a backup bike and Johnson using a provisional and on his third bike.

Four laps and every tearoff later, Smith was in front and pulling away. He eventually cruised to 2.559-second victory, which, coupled with his Dash for Cash win, vaulted him to the top of the standings.

Smith has to like his position with the series rolling back to Springfield for the second 2014 running of the Springfield Mile on Sunday. Smith won the first time AMA Pro Flat Track stopped in Springfield this year, but Mees isn't going to stop fighting.

"I knew (Saturday) was going to be tough, we had some bike troubles," Mees said. "We worked through them. It was actually a really bad day and we still ended up fifth. Bryan definitely made max points winning that Dash and leading all the laps, so he did what he needed to do.

"Springfield, of course, has favored him a little bit, more than me, but it can go either way. I'm pretty excited to go to Springfield."

While the top three, with a combined 20 podiums on the year, have built some separation from the rest of the pack, there is a solid battle forming behind them from fourth back to ninth. Less than 50 points stand between fourth place Kenny Coolbeth of Zanotti Racing and his teammate, Stevie Bonsey. Henry Wiles (Don's Kawasaki), Brad Baker (Factory Harley-Davidson) and Sammy Halbert (South East Harley-Davidson) are fifth through eight in points, respectively.

Baker's fourth place finish drew cheers from the crowd and a fist pump from the defending champion as he took the checkered flag with no power. He kicked his way across the finish line as he coasted down the final straightaway.

"I held on to the bitter end, and the thing ended up having a mechanical at the end and lost all power coming off of (turn) four and I ended up Fred Flintstone-ing across the finish line to end up fourth," Baker said. "Considering all things, it could have been worse. I'm happy with it. I made up some points in the championship. It would have been nice to get that first podium on a twin, I was looking forward to that, but it was good, I'm happy.

"Things could have been a lot worse, it could have done that the lap before and I could have not finished the race. It was a hard day, I had to ride the motorcycle as hard as I could."

Kyle Johnson had a solid bounce-back effort, battling his Parkinson Brothers Racing teammate J.R. Addison to the finish line. It was Addison, racing for the first time since suffering an injury at Springfield in May, who took the checkered flag, but Johnson now has a strong lead in the points.

Johnson, with 170, leads second place Ryan Wells by 50 points after Wells finished sixth in Virginia. Davis Fisher sits third, 28 back of Johnson. Fisher missed both the Peoria TT and Virginia Mega Mile with injuries, but expects to be back on the bike at Springfield.

Still recovering from injuries suffered in a couple crashes at Peoria, Johnson was happy with his race in Virginia.

"We were looking forward to this place, we knew we would run good," Johnson said. "It definitely was a bummer going to Peoria, coming out a little banged up because I definitely think we could have run a little better - not that I'm saying we didn't leave everything on the table - but it would have been nice to be 100 percent today."

Addison, who said he rode some away from the track to try to get back up to speed before the race, was looking forward to returning to AMA Pro Flat Track action, winning made it that much sweeter for him.

"I knew I could do decent coming here, but I didn't expect to win," Addison said. "This is my kind of track, so I was kind of excited for it."

Jeffery Lowery (Englehart Racing) rounded out the podium in Virginia.

Bronson Bauman (Rod Lake Racing) and Jarod Vanderkooi (Johnny's Vintage Motorcycle) are fourth and fifth, respectively in points. Vanderkooi was fourth at the Mega Mile while Bauman crossed the line in fifth for his fifth straight top 10 finish. Bauman's streak of top 10s is the longest current run among Pro Singles competitors, and he'll look to keep it going at Springfield this weekend.

FansChoice.tv will be the official home for live streaming coverage of AMA Pro Flat Track and AMA Pro Road Racing events in 2014. The site will also provide coverage of IMSA's development and single-make series, and NASCAR's touring and weekly series.

AMA Pro Flat Track is a national motorcycle racing series in North America and is considered one of the oldest forms of motorcycle racing. Sanctioned by AMA Pro Racing, the Series is highly regarded as the most competitive form of dirt track racing in the world. The 2014 schedule consists of 16 rounds on the country's finest flat track courses. For more information on AMA Pro Flat Track, please visit www.amaproracing.com/ft. 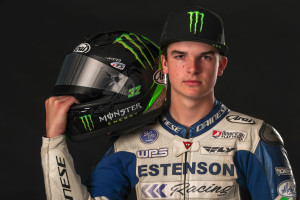